In Pennsylania, Biking and Hiking and a Plumbing Problem

We traveled to southwestern PA this week to meet up with our wonderful old neighbors from Bradenton, Dick and Shirley Krieger. They showed us a little of the area, their lovely home, and treated us to a wonderful steak dinner. It was so great to see them!

We are staying just a couple of days at the Uniontown KOA campground which is actually in Connellsville, PA. There are some amazing state parks in the area, (Ohiopyle is one), AND a rails to trails bike trail runs RIGHT THRU THE KOA CAMPGROUND. Sparky has died and gone to heaven. 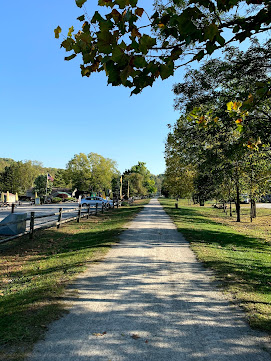 Eldo is still waiting for some kind of campground with golf amenities, lol.  In this area, within very reasonable one to two hour drives is the Frank Lloyd Wright Houses called Falling Water, (tours ARE available, but we aren't doing that this particular time), and Kentuck Knob, the 911 Pennsylvania memorial crash site (we DO hope to work our way to that site), many more hiking trails, wineries, kayaking and river rafting opportunities, the Laurel Highlands, etc. So many hiking and biking trails, so little time! 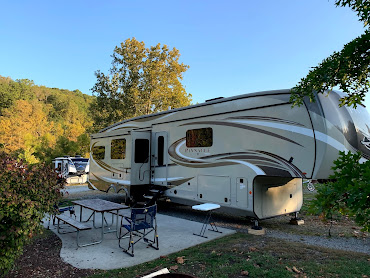 A little about the KOA campground....it is big rig friendly, but the drive into the campground is on a winding and very steep road. The campground sits right next to the Youghigheny River. Sparky has no idea how to say that. (The locals pronounce it very differently). There is an often used train track just on the other side of the river. Trains pass through regularly, so be prepared with some white noise if things like that bother you. We run a fan every night, and Sparky uses ear plugs for snore prone Eldy, so she doesn't hear them at night. (sorry, E.!) The trains are NOT using their horns, so that is good! The KOA has a nice camp store, ice cream treats, Hunt's pizza and other delicious goodies that can be delivered to your campsite. Good AT&T reception, hot spots on our phones work great! KOA has a variety of campsites, and ours happened to come with a concrete patio, which is really nice. Their last day of the season is October 18th.

Connellsville is a small town, and the roads are narrow, plus there is construction going on on the main roads thru town, so you gotta have patience if you are driving your big rig around and thru town. (Are you listening, Eldo?) It doesn't hurt to drive just the truck around and make a plan for exiting when you are ready to leave, which is what we did. 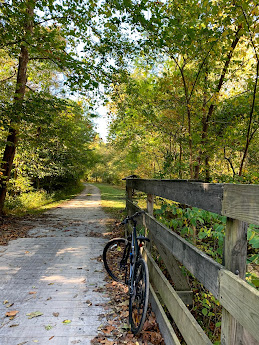 The bike trail is called the Great Allegheny Passage. The bike trail is 150 miles, a path between Cumberland, MD and Pittsburgh, PA. It's called "The GAP" for short. Sixteen bridges, four tunnels and lots of beautiful scenery as always. It has an average grade of less than 1% and is packed crushed limestone.You know it's cool, if it earned an entry into the National Rails to Trails Conservancy Hall of Fame. Sparky rode it three times while she was here. The first time she rode 20 miles total out and back going north, ten miles each way. It's mainly woods and the river as you traverse the trail. It felt very isolating as few were on it during the week. Because there are "mountains" or steep hills on one side of you, it was also quite dark and chilly. Sparky doesn't mind chilly, but it felt a little bit creepy at times. Cell service is non-existent after about 5 miles out of the campground. Sparky recommends biking with a buddy. 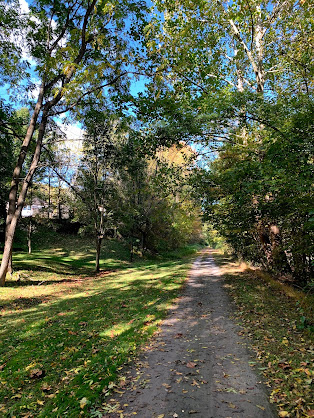 The second bike ride was 20 miles total going south out of the campground. This part of the trail was not so shady, and seemed to have more of a connecting vibe to the outside world. Again, cell service was very spotty, but better than the northern route. However, the trail was rutted, and needed grading in many spots. The leaves made it difficult to see the trail most of the time so the ruts and rough spots were a surprise when they occurred. BUT--Sparky enjoyed this directional route so much, she went back out on it for a third time before leaving for our next destination, Chambersberg, PA, a two night stop designed get us through another solidly booked fall weekend. 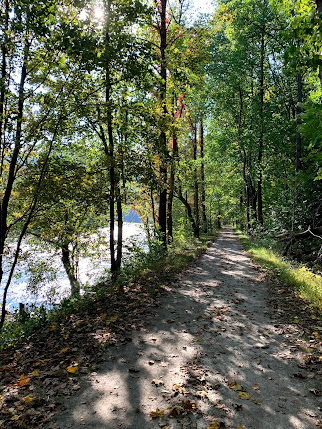 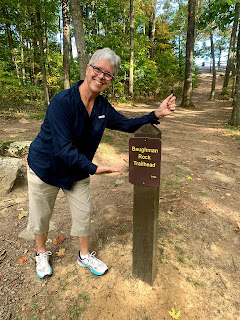 After getting in two rides, Sparky was so happy when Eldo suggested checking out Ohiopyle State Park, about 40 min. from the campground. It just so happens that there is a scenic view there called Baughman Overlook. (Sparky's childhood name is the same--same spelling!) You know she had to go see that! So we did! 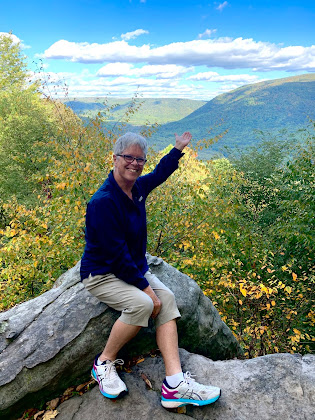 And then of course, we had to see the waterfalls at Ohiopyle, too--Sparky LOVES waterfalls. This one is called Cucumber Falls. It's not too spectacular now, but it was still very pretty. It would be awesome in the spring, we are sure. 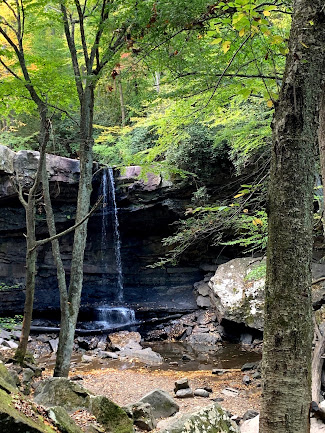 Pennsylvania is having the most wonderful fall color show right now. No wonder all the campgrounds are booked solid thru the weekends in October! This is the view of the property near Kentuck Knob, one of Frank Lloyd Wright's houses. 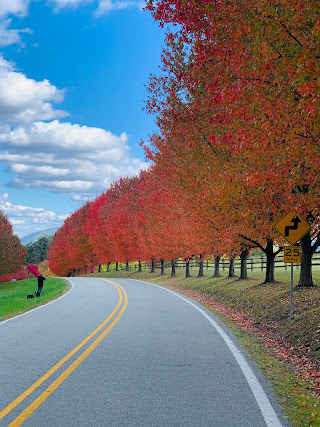 We wish we had had the time to tour both Kentuck Knob and Falling Water, we understand they are quite amazing.

And Sparky, what about the plumbing problem? Well, that's going to be a separate post. Optional for viewing, but helpful information for RVers. It will be on the blog soon....

Posted by Jeannie and Eldy at 7:48 PM