A Rainy Two Days in PA

We had two VERY rainy days here this week in Lebanon,  PA. So we decided to visit Bass Pro Shops and pick up a couple of things for Eldy at the outlet mall in Hershey. 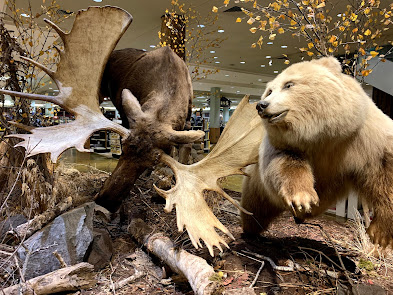 They do amazing things with the decor inside....taxidermy animals, nature scenes, and whopper displays of nature...sometimes waterfalls, animals fighting. They are very cool, and a wonderful place to just walk around and spend a rainy day. So that's what we did! It's a captivating place for youngsters as well. 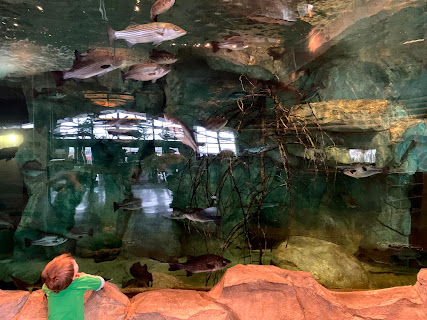 There's a lot of testosterone building going on in this place, Sparky thinks. Although, it was great to see a BIG ladies camo hunting wear department there, too.
We explored Hershey a bit, too....You CAN smell the chocolate once you get near the Hershey factory. The street lamps have hoods in the shape of Hershey's kisses. We saw the Hershey mobile while we were out and about. 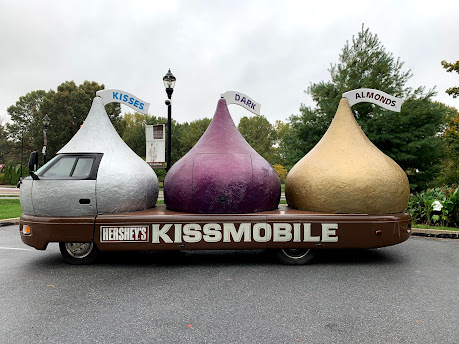 We had a little bit of nostalgia as we visited Friendly's, a chain in this area, that is famous for ice cream treats. We took the grandkids there years ago, the first time we were RVing. Wow! What a banana split! (That was Eldy's.) Sparky is a minimalist when it comes to desserts. Like just a scoop of ice cream and a Reese's peanut butter cup for decoration. 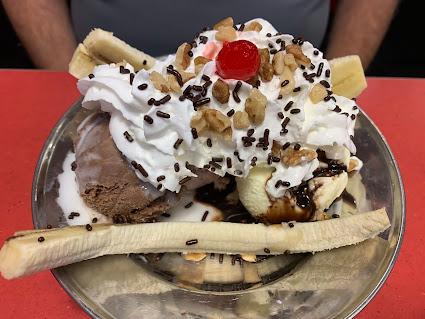 A visit to Michael's, Hobby Lobby, and Joann Fabrics to get some crafting supplies, and we were all set. Eldo exclaimed, "We've only been here three days, and we've managed to hit all three craft stores. That's gotta be a record, Sparky!" Yeah, probably so.... 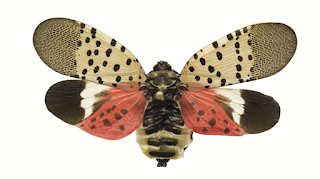 When we arrived in Hershey, the literature that was given to us at the park, mentioned an invasive species of bug...the spotted lantern fly. It came over from a shipment of landscaping stone from overseas in 2014. It's one of THE most invasive and destructive insects of this time and a pretty one at that. They hop on the ground, and if they do hop a distance, they open their wings and a beautiful red and black pattern emerges. 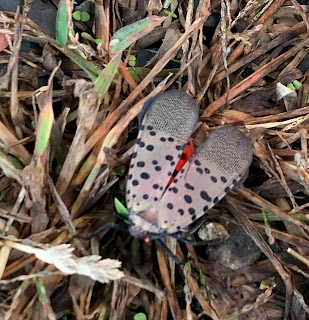 They eat certain trees, the tree of heaven is one of their favorites--yes, that really is the name of the tree and they are all over the US. (another invasive tree species) and they love fruit species and like over 70 plant species. They are not picky eaters! Apples, cherries, chestnut, grapes, pears, peaches, maple, pine, plum, poplar, oak, rose and walnut all are food for these little beasties. They are plant hoppers, so they are relatively easy to catch and stomp and destroy. Sparky is on a mission, they are all over the Hershey campground and in the PA area. They have no natural predators, so that's a problem. They are spreading throughout some of the eastern states...sigh....here we go, fighting another invasive, devastating species. Sparky saw this tree on her bike ride today, they are using sticky tape to trap the bugs, but there were HUNDREDS more all over the bark and on the ground around this maple tree. 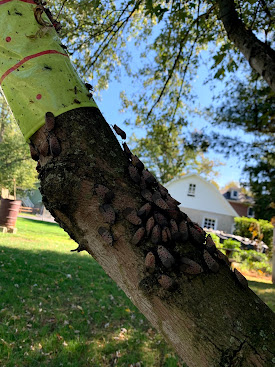 We are fighting the spotted lantern flies on the outside, and finding those darn stink bugs all over the place trying to come inside the rig. We just kill them and not worry about insecticides for right now. We are winning against the stinkbugs, but it appears Pennsylvania is losing ground against the spotted lantern fly.  We hope not!
See you next time on the bike trails!

Posted by Jeannie and Eldy at 2:55 PM