We left the Badlands after 10 marvelous days....On our way back to Indiana to get our mail which was being held for us, we stopped at the On-Ur-Way RV Park in Onawa, Iowa, a very nice overnight park which we use each time we travel I-80 to South Dakota and back. Our second overnight stop this time was the Joliet, IL Hollywood Casino for one night because it has a beautiful RV park. Not cheap, about 53.00 a night for the casino RV park stay, (IL has 14% sales tax??-Yikes!) but it was beautiful, and the most spacious, spread out sites we have ever seen.

The park was empty just about, and Sparky enjoyed taking an early morning walk. A deer came bounding through right while she was walking!

We got to Indiana and stayed one week at the Elkhart Campground. That is like home to us, we've stayed there many times over the years. There have been many improvements to the park, and this year, some of the inside roads have been blacktopped. The kids' playground is really new since we last stayed at the park. We love the owners, and the staff is friendly and helpful. The sites are gravel but level. They have added a TON of new sites as well. Sparky loves the little woods path in the back of the park for walks in the early morning. It's not very long of a walk, but the path circles in and around a small woods, so you can keep walking in different circles and get a nice walk in for exercise. Sparky LOVES woods (unless she gets poison ivy, adds Eldo, which she got the last time she was in the woods.)

No awnings have come in yet, (we lost them to a huge limb back in Alabama in a freak fall) but we stopped over in Indiana anyway to see some of Eldy's family. We plan to head to Pennsylvania at the end of the week if all goes well, to stay at some Thousand Trails parks (that's part of our camping membership plan) and check them out. 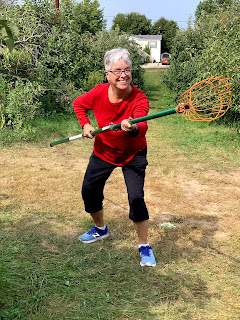 But first, apple picking time! If you are in the area, visit Kercher Sunrise Apple Orchards...We had a great time picking a variety of apples ourselves. They don't use ladders anymore, too dangerous and liability issues, so now you use a picker basket tool.

Sparky had fun trying to get the hang of it...

Eldo had no problems, he's two for one! 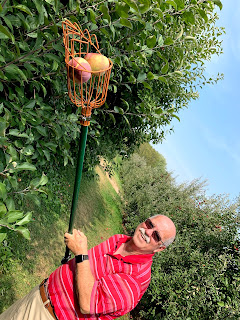 The cider is fabulous! And the apples were amazing! You forget how fresh they are, the leaves are still attached as they come off the trees. 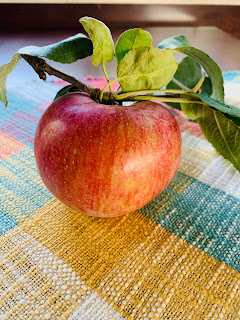 We didn't get a huge amount...Sparky does not bake, so we got just enough to get our eating apple fix, and we will go back again for another visit before we go. It was so much fun! Sparky wishes she could take her grandson apple picking, but he lives too far away.

After a week at Elkhart Campground, we switched over to a free week's stay (thanks to our membership) at Twin Mills Campground. Sites are a little more treed, and you have to be careful about where they put you. When you are a Thousand Trails member, you don't get to pick where they put you, but you can request a change once you get to your site. We are on site C-59 and it's a pull thru, which Eldy loves. Back ins are more challenging for us right now, because we are still new at pulling the fifth wheel. We've been on the road now for about eight weeks. We are lovin' it! 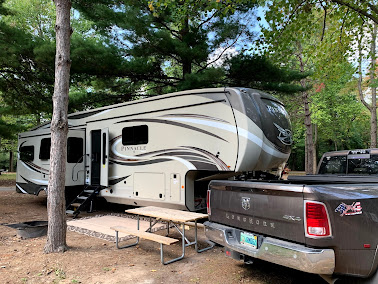 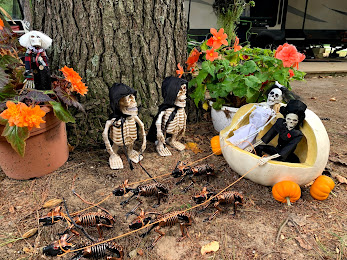 Twin Mills is getting into the Halloween spirit EARLY! It's not even October yet! The regulars here start decorating the last weekend of September, and then for another weekend,  the first weekend in October. They close October 31st, so we think they keep the celebrating earlier.

The regulars bring in trailers by the boatload, FULL of Halloween inflatables and decorations. 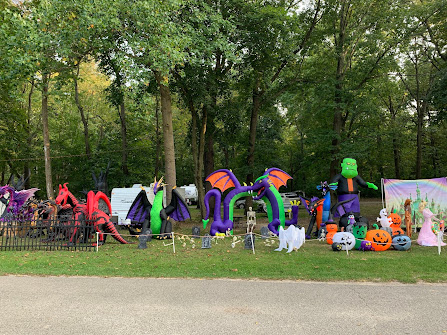 It was AMAZING the degree and extent of the decorating. The entire campground was decorated! This was a real antique truck brought in. 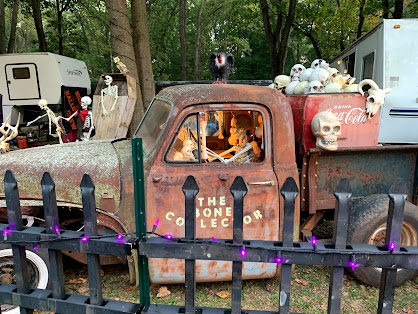 Some have been here every year decorating for kids for over 13 years. WOW! What a treat for the kids! The truck with the lighted skeletons was one of Sparky's faves in the campground. This particular display had about five sites in a row totally decorated like a neighborhood with clever street names and all kinds of skeletons and scenes. It's easy to just bring in a bunch of inflatables, but these people were so creative! Here is another one of Sparky's favorites: 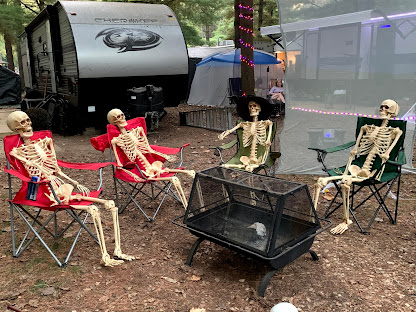 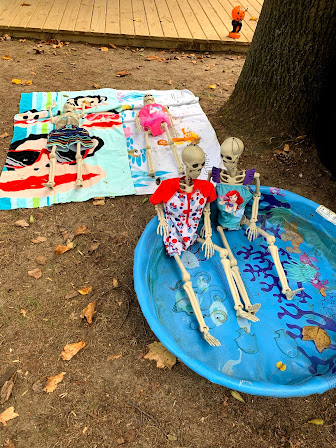 Sparky was thinking about saving this post till very close to Halloween, but wanted to keep the blog close to our real schedule, so here it is early. In Florida, in our area, people did not decorate for Halloween. Sparky LOVES Halloween, and fall, so it's great to see everybody get in the spirit of the season up here. Eldo loves it, too! Sparky's grandson, after seeing all the Halloween photos said,"Grandma, you better start decorating!" But we are only here a week, so Grandma is going to fall decorate a little later. She's got some fall sewing projects in mind, hopefully, she will get them done soon!And some promised felt ornaments for her brother....and baby blanket....and...you get the picture!   Until next time....

Posted by Jeannie and Eldy at 8:57 AM