Sparky decided to try the Mickelson Bike Trail one more time. This time, further south, where the snow was NOT still on the ground. Sparky got a map, which seemed like a good one. She wanted a little bit of a challenge...a little bit of a climb. On the map, it looks like a little climb, in reality it was a steady big climb for about 4-6 miles. Sparky started in Edgemont, and decided to go all the way to the Mystic trailhead.  #4 is Edgemont Trailhead, and Mystic is #7. 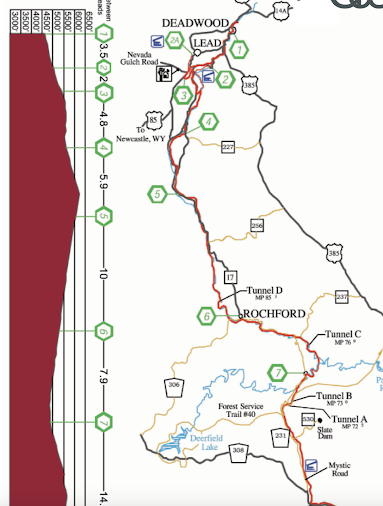 Here's the problem...actually, there were a couple of problems. 1. There is no cellphone coverage on 98% of the trail. (Sparky's estimate but it's pretty accurate) 2. The map is accurate for hikers. For drivers supporting the hikers or bikers, the map sucks. (Ask me how I know, says a disgruntled Eldo). We decided that Sparky would get through the rough elevation first, and see how she felt, (not knowing it was 4-5miles steep climb at the time.) Eldo would meet her at the next trailhead in the truck and we would decide if Sparky would continue on or not. Eldo was waiting at the parking lot at #5. Sparky had cellphone coverage thru that far and was appraising Eldo how she felt. (EXHAUSTED,  but exhilarated.) Just when she thought, well, the elevation was a bit too much, she hit the downhill portion of the trail. PIECE OF CAKE! It was decided that she would keep going. After all, it was downhill just about the entire rest of the way. 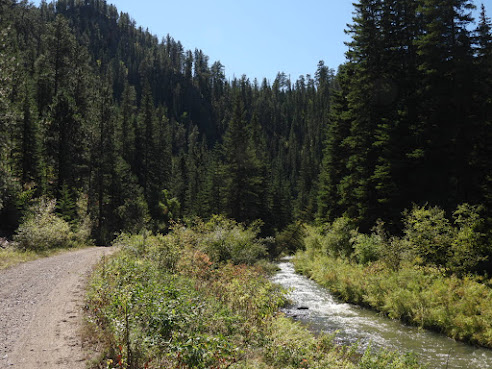 There was discussion about meeting at the Rochford OR the Mystic trailhead just to be sure that she was comfortable going the rest of the way, about twenty-five plus miles total. But after getting back on the trail, Sparky kinda forgot whether she said she would stop at Rochford trail head, or keep going. (Key point, pay attention, readers!) 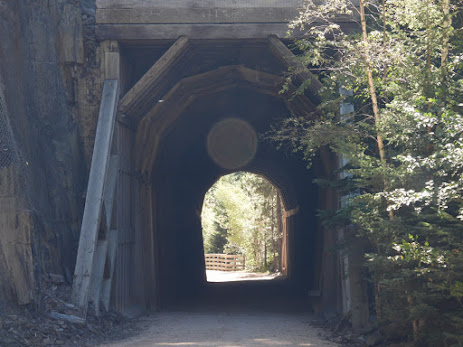 In the meantime, unbeknownst to Sparky, Eldo proceeded to try and follow the sketchy map provided to try and get to the Rochford Trailhead. That was supposed to be the first meetup after a long period of radio/cellphone silence. Eldo started having problems. Now, he has a fantastic sense of direction, but the map was NOT CORRECT. While Sparky was whizzing downhill, Eldo was encountering gravel road after washboardy gravel roads. At one point, cattle were blocking his ability to move forward! (South Dakota is a free range state in many places. If you get off the beaten path, you are going to encounter cattle right in front of you). If Sparky remembers right, from her last travels, if you hit and kill or maim a steer or cow, you are responsible for reimbursing the rancher any and all FUTURE breeding costs! 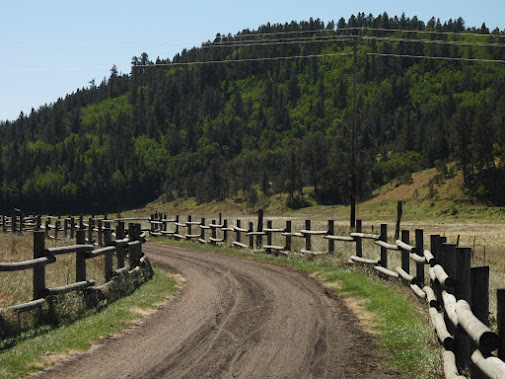 Unaware of all this, Sparky gets to Rochford trailhead. Uh-oh...no Eldo. Sparky waits 20 minutes. Still no Eldo. Did he say he would meet her at Rochford or Mystic? Then she decides to ask a rider heading to the next trailhead, Mystic, if he would look for a Dodge Ram 3500 truck with a baldheaded driver and tell him, Sparky is at Rochford Trailhead, waiting. At this point, Sparky is going to be like a lost child, and sit still. (SPARKY, SIT STILL????   HAHAHAHAHA, laughs Eldo.) She didn't. After another five minutes, Sparky decides to head to Mystic. Wait a second! If she doesn't catch the guy she told to watch for Eldo, she will be riding to Mystic, and Eldo will pass by going the other way, headed back to Rochford Trailhead. Better pedal fast, Sparky! So she did. Dangerously fast, flying downhill at 16-17 mph. (That's fast on a gravel packed trail.) She didn't even notice the scenery. 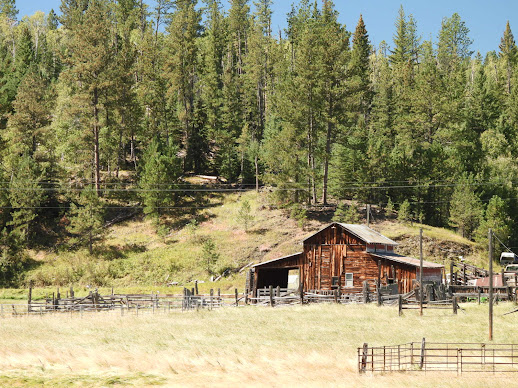 Up ahead, she spots a guy on a bike. Could that be.....the guy she told to tell Eldo to meet her back at Rochford?? YES!!!!!! She says, "Are you the guy I told to look for the Dodge Ram 3500?"  He says, "Yes. I guess you are not back there, then." Haha...nope! And, WHEW! and on she rode, as fast as she could. Because if she didn't, maybe Eldo had beat her there, didn't see her, and thought he should drive back to Rochford. Are you still with us?
Sparky gets to Mystic, a total of 23.8 miles bike ride. No Eldo...oh, no! Did he go back to Rochford? Where is he? (You don't want to know, mutters Eldo.) Sparky contemplated riding back to Rochford trailhead. Nope, uphill all 7.9. miles. What if she left to go back to the last trailhead, and Eldo had just left there to come to where she was now? She will stay put. Fifteen minutes later, in rolls Eldo, and he is madder than a hornet. Not at Sparky, but at the map. He asked three people for directions how to get back to the trail the best way, because the map was NOT accurate, and got three different sets of directions. But he made it! He had been driving for almost four hours straight, in and out of three counties, just to be able to get Sparky on the trail and let her ride to her heart's content, which she did, and then some! He was so frustrated with the map, frustrated that we could't communicate by way of cellphone, and a little scared that he would not be able to find Sparky! Truth be told, Sparky was a little nervous about Eldo not being able to connect back with her, too! But it all worked out. What a guy, eh? 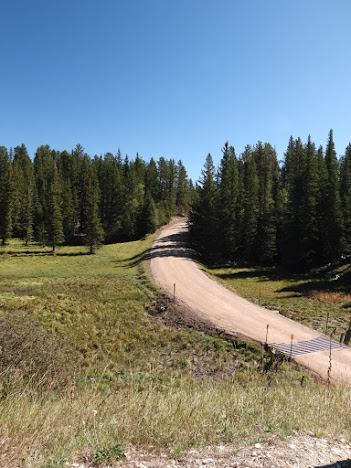 And what a ride! Beautiful mountain stream along the way, forest after forest, farms, tunnels, bridges, and scenery to take your breath away....
Until next time....we head to the Badlands!
Posted by Jeannie and Eldy at 2:00 PM