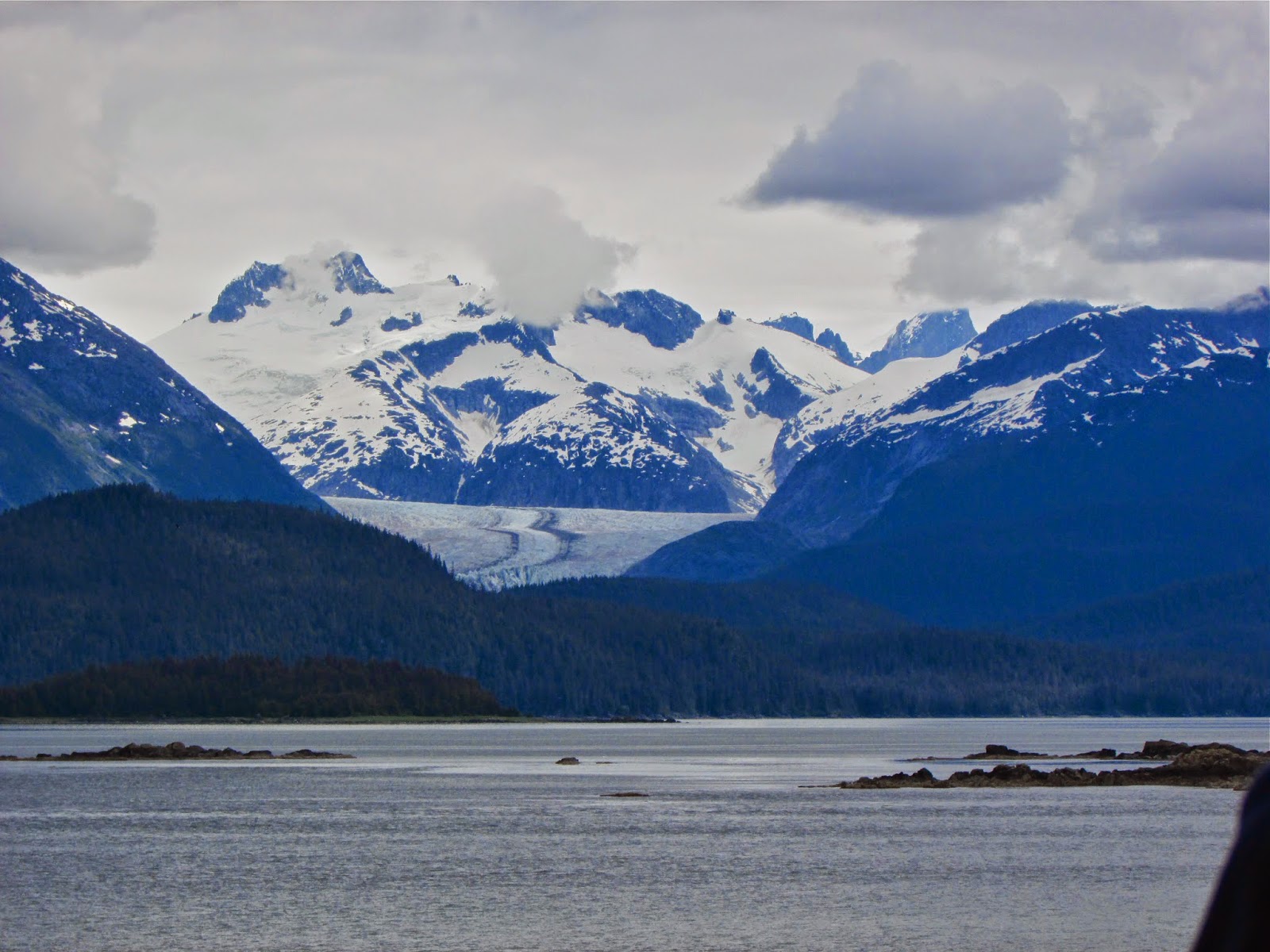 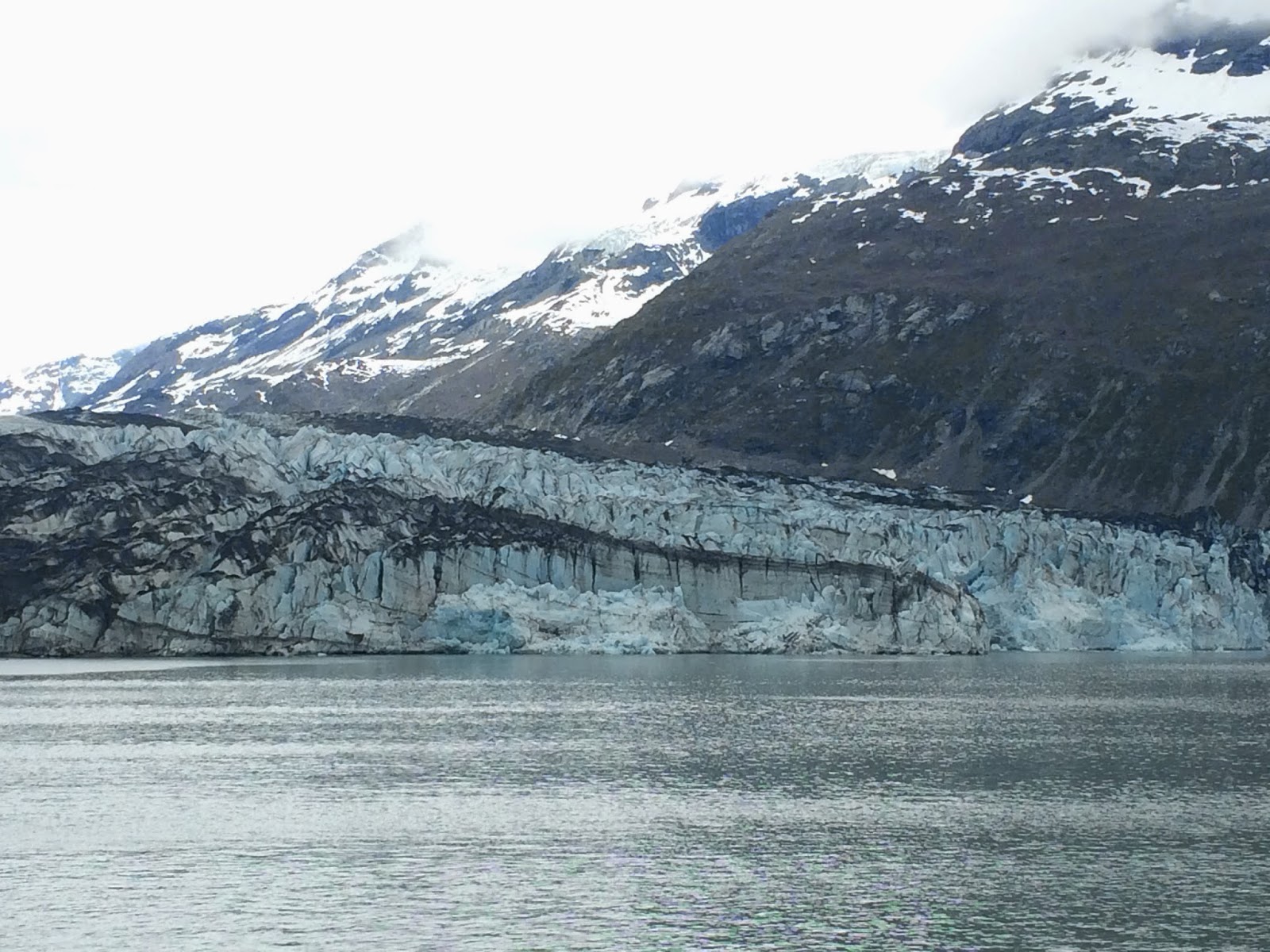 Our final stop wasn't a city, it was Glacier Bay...home of the Majorie Glacier located in Glacier Bay National Park. This area is also a United Nations biosphere reserve. Just 250 years ago, this was all glacier and no bay. Along the way there, we saw lots of glaciers or ice fields...Some were very dark, and some were very white..Most were a combination of rock debris and ice so that makes them look dirty. The glaciers also had a lot of blue in them, something to do with the light waves hitting them.

Here's a view of the Marjorie Glacier from a seaplane, courtesy of the internet. 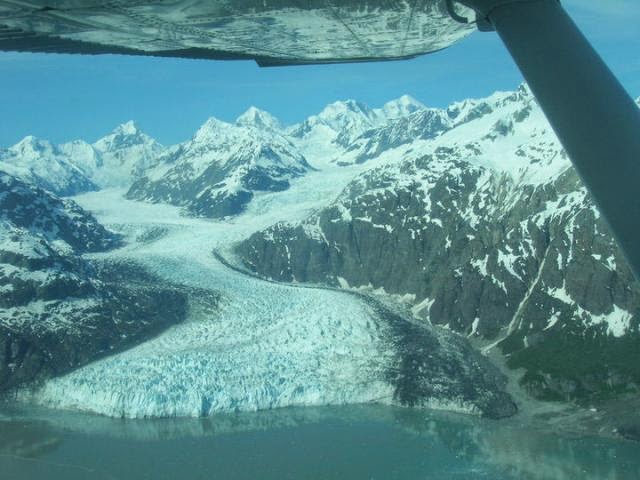 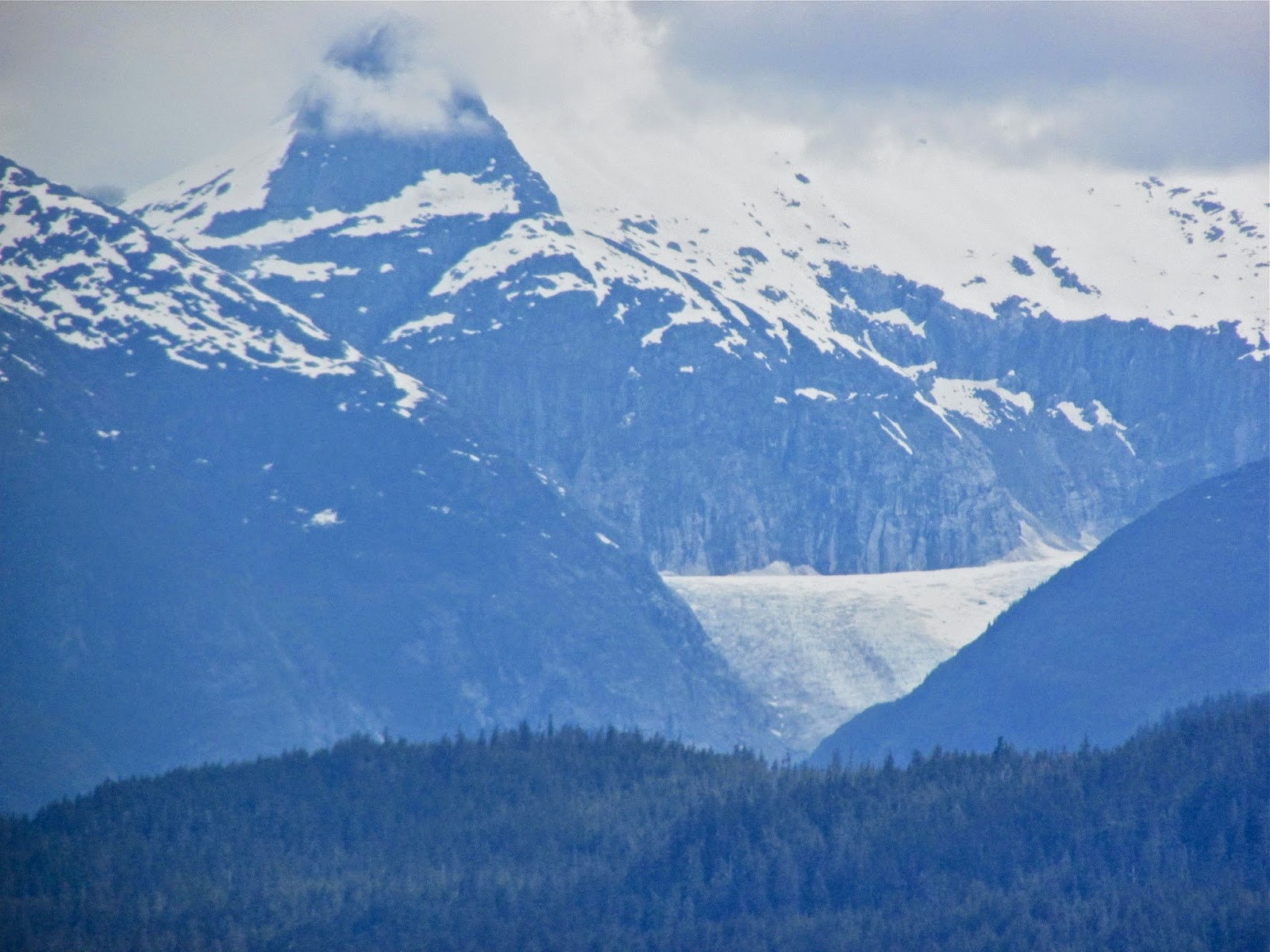 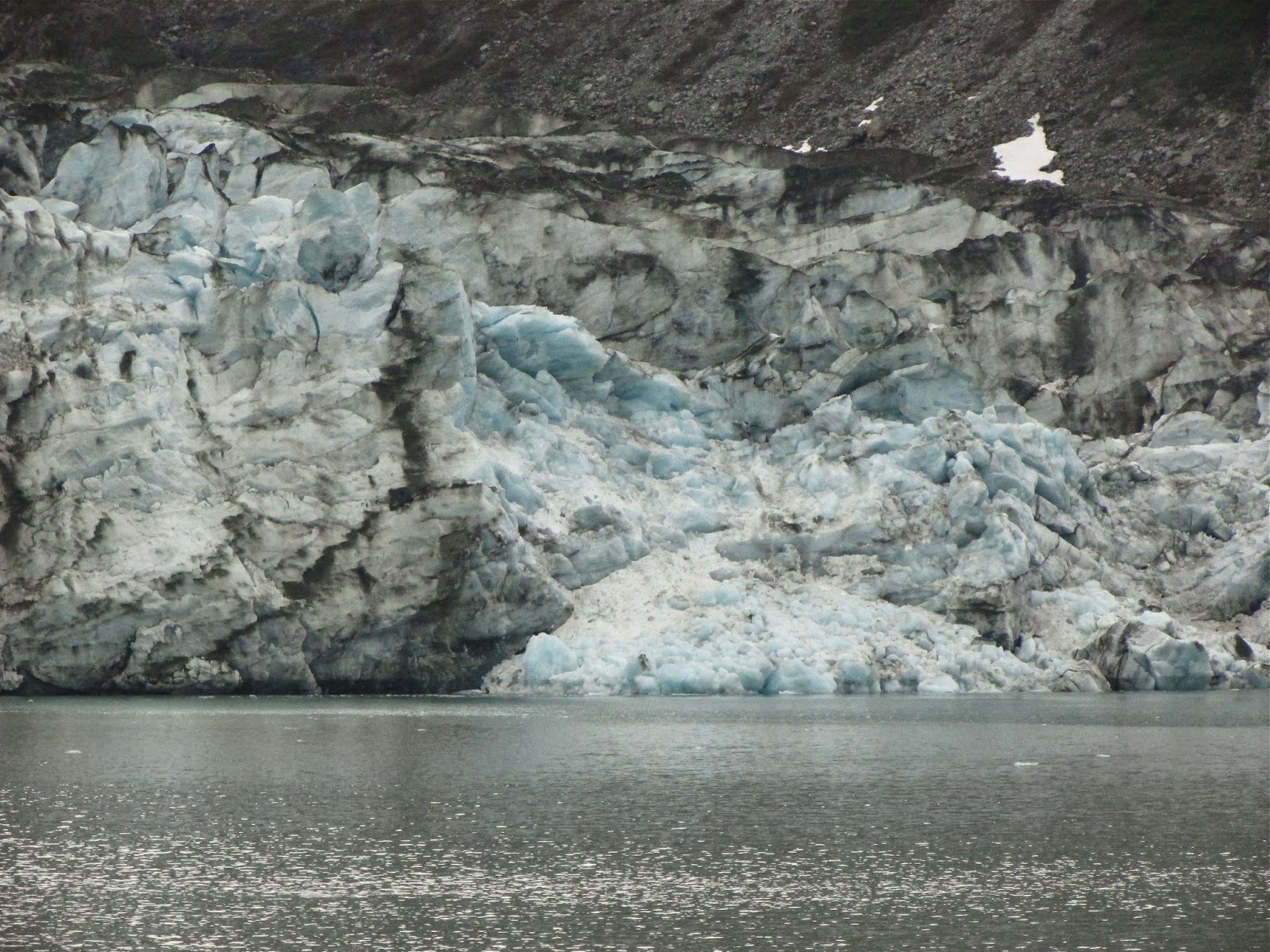 Majorie Glacier extends for 21 miles long upstream and is about a mile wide...It's 250 feet high above the water, and extends another 100 feet below the water. It's total height makes it higher than the Statue of Liberty. The cruise ship was able to come in close to the glacier so we could get some photos. It stayed in the area for about an hour so we could watch for any action from the glacier. It is supposedly one of the most active glaciers for calving, which means a splitting and breaking off of large sections of ice. While we were stopped, Sparky heard the BOOM and CRACK from an explosion of one section of ice breaking off, but didn't see the piece fall. THEN, she DID see a HUGE portion of ice fall and crash into the ocean. The ice piece that fell off was as big as a house, and as it hit the water, a huge wave radiated outward towards the ship. It looked like a miniature atomic bomb hitting the water. The resulting wave was so big, it rocked the cruise ship!  WOW! That was a really exciting thing to see and feel! 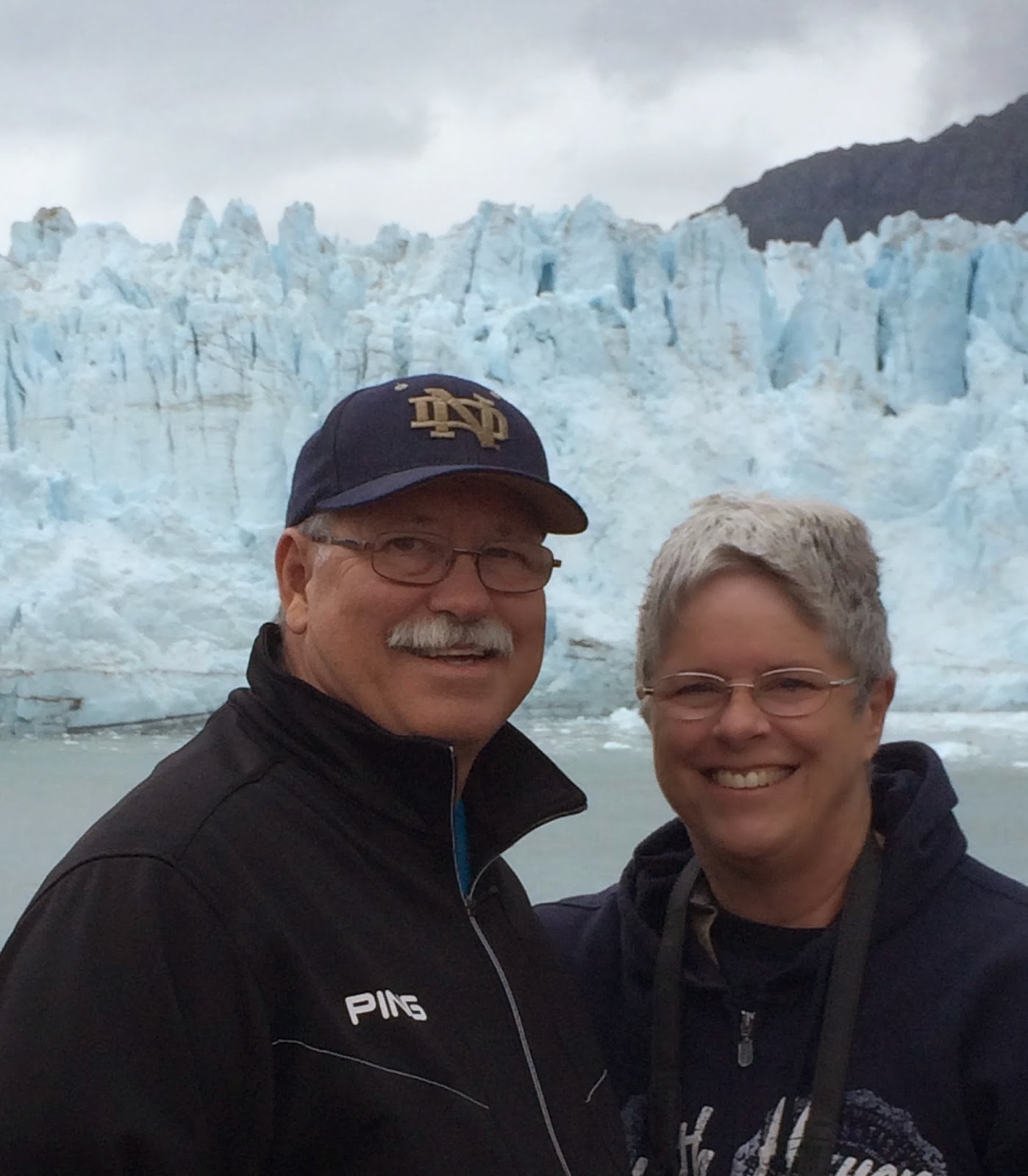 We were on the top deck of the ship, so it's hard to get an idea of how high this glacier really is. It's as tall as about a 25 story building, they say. 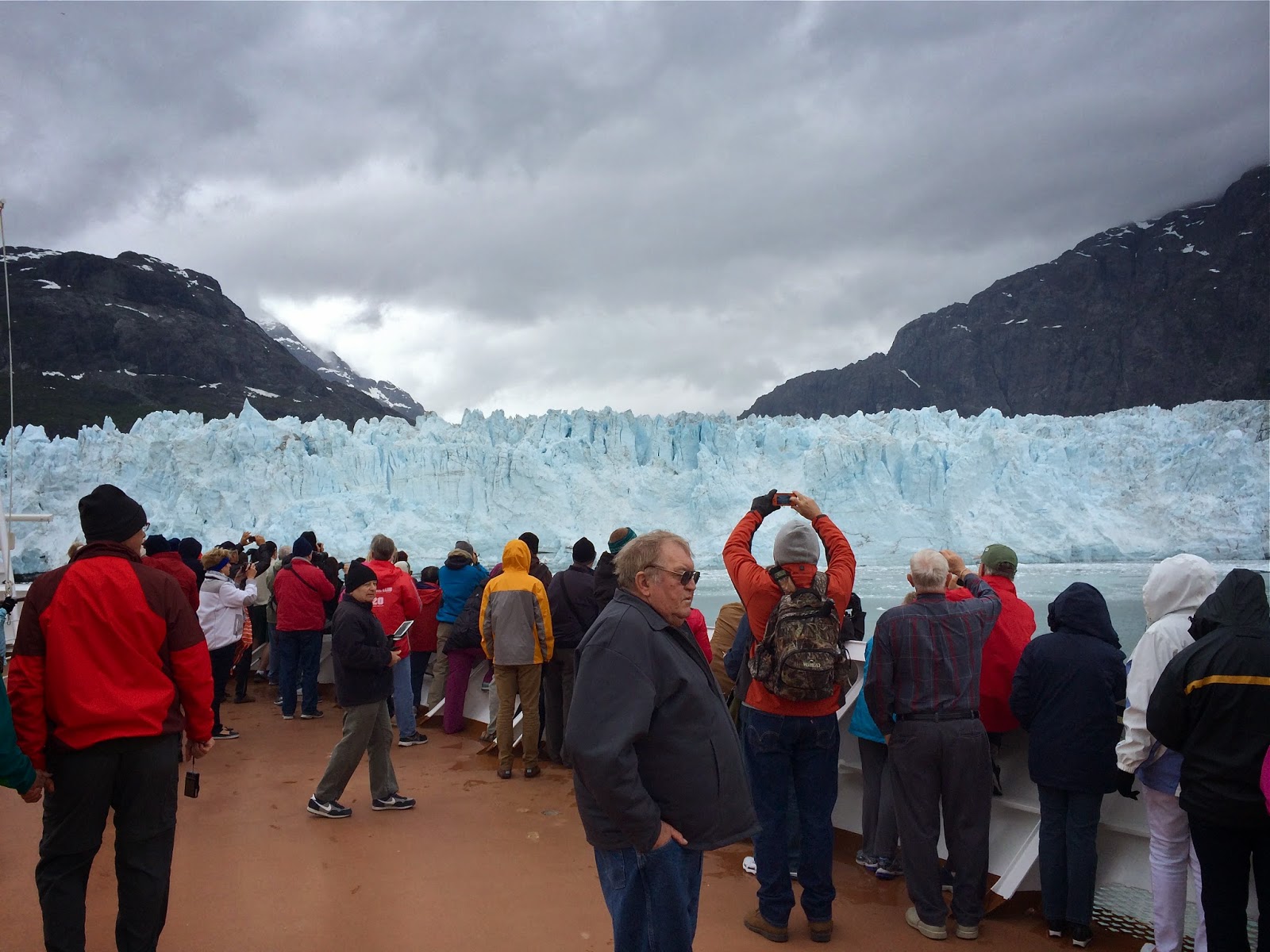 But at the top of one of the glacier's highest pointy peaks, in flew a bald eagle. He landed on one of the highest ice peaks of the glacier. He stayed there for a long time. Sparky didn't have a powerful enough zoom to be able to capture him, but some people did. So here's a photo with a little arrow to show you where he was. And we were VERY close to the glacier, so it give you just a little perspective on how high this glacier really is! 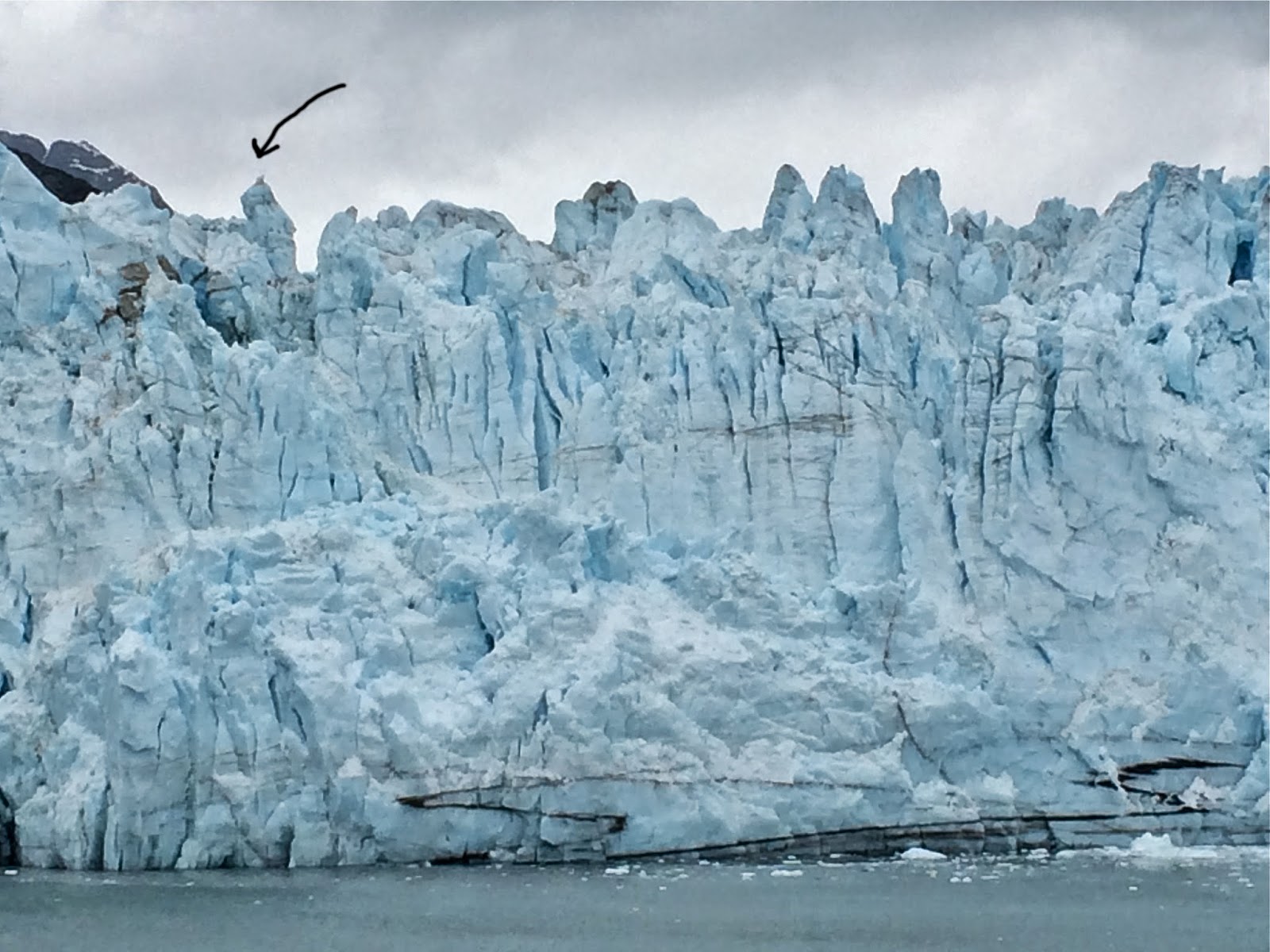 After an hour, it was time to leave the bay and head for a day's sailing on the open seas. This was an AMAZING experience today and Sparky was extremely grateful and felt very blessed that we got to do this. It was a dream of a lifetime, and thanks to Eldy, Sparky got to experience this. Eldy had seen all this before, pre Sparky. He had done the seaplane trip to the fjords, and some other excursions quite a few years ago, and so this time we concentrated on just the main aspects of the cruise, due to budgetary constraints. Sparky didn't mind missing some of these other things, especially since they were so expensive! Both of us regretted not being able to visit Denali Park, but it just wasn't possible this time. We had to get back soon to get ready for a trip to visit Sparky's daughter, Kelly, who is being deployed overseas, and we didn't want to miss that.

It was time for the ship to leave Glacier Bay, to start heading past the inside passage for Seward and Anchorage, where we would be ending our cruise. Out to the open seas we went....Stay tuned for one more day with us in Alaska, it was pretty cool, too!