Up the inside passage we went....Juneau was our next port stop.....the capital of Alaska with no dome, just an ordinary looking office building. The area of Juneau is almost as large as the states of Delaware and Rhode Island, yet the population is small for the area, about 32,000 people. Steep mountains 3500-4000 feet high surround Juneau. At the top of the mountains is an ice field and 30 glaciers flow from this ice field. Yep, THIRTY glaciers! The Mendenhall Glacier is here, one of the more well known glaciers that the rest of the world is familiar with.

We took an excursion tour at this port--a whale watch....The bus ride out and back was really fun with a funny driver from Hawaii (!) who cracked a lot of jokes and made the ride extra enjoyable. He told us a lot of eagle facts and tidbits which we had not heard of before. Like the male eagle's talons lock when they catch prey. If the prey, like a salmon, is heavier than what the eagle thought he could handle, he literally sinks like a rock to the water and has to swim with his prey to where he can manage it. Guess sometimes the eagle drowns. The driver also had a story to tell about a woman naturalist who was rescuing a bald eagle and she had to transport it in her car. The eagle went crazy in the back of her car, ended up in the front and dug his talons into her leg while she was driving. She couldn't get the eagle's talons to release. She had to drive herself to the vet/ hospital to get the bird released and get treatment. Painful, for sure! She made it, but the eagle didn't. The driver told us more interesting facts about the eagles.

They have polarized eye lens. They can see a mile away and extremely far down into the water. They also have a 270 degree field of vision. Those poor little turtles, ducks, or whatever the eagles are eating, don't stand much of a chance! Especially since bald eagles can dive up to 100 m.p.h.!  Females are larger and stronger than the males--that's something different in the usual species traits. Their nests are HUGE--about 13 feet deep (!) and about 8 feet wide, and over a TON in weight. WOW! A group of eagles is called a kettle.  And, eagles mate for life....Gotta share the juvenile eagle photo once more time in case you missed it the first time.... 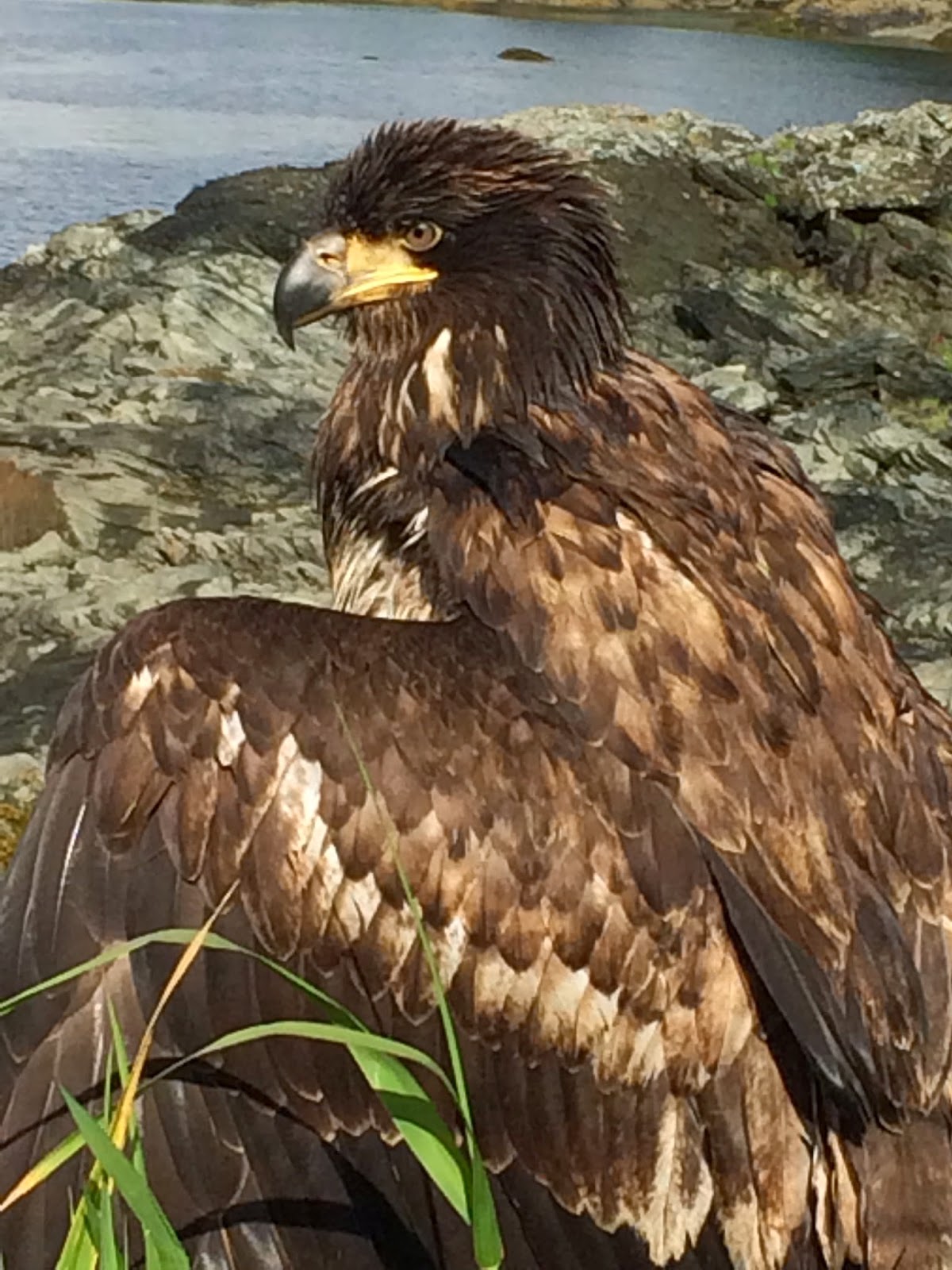 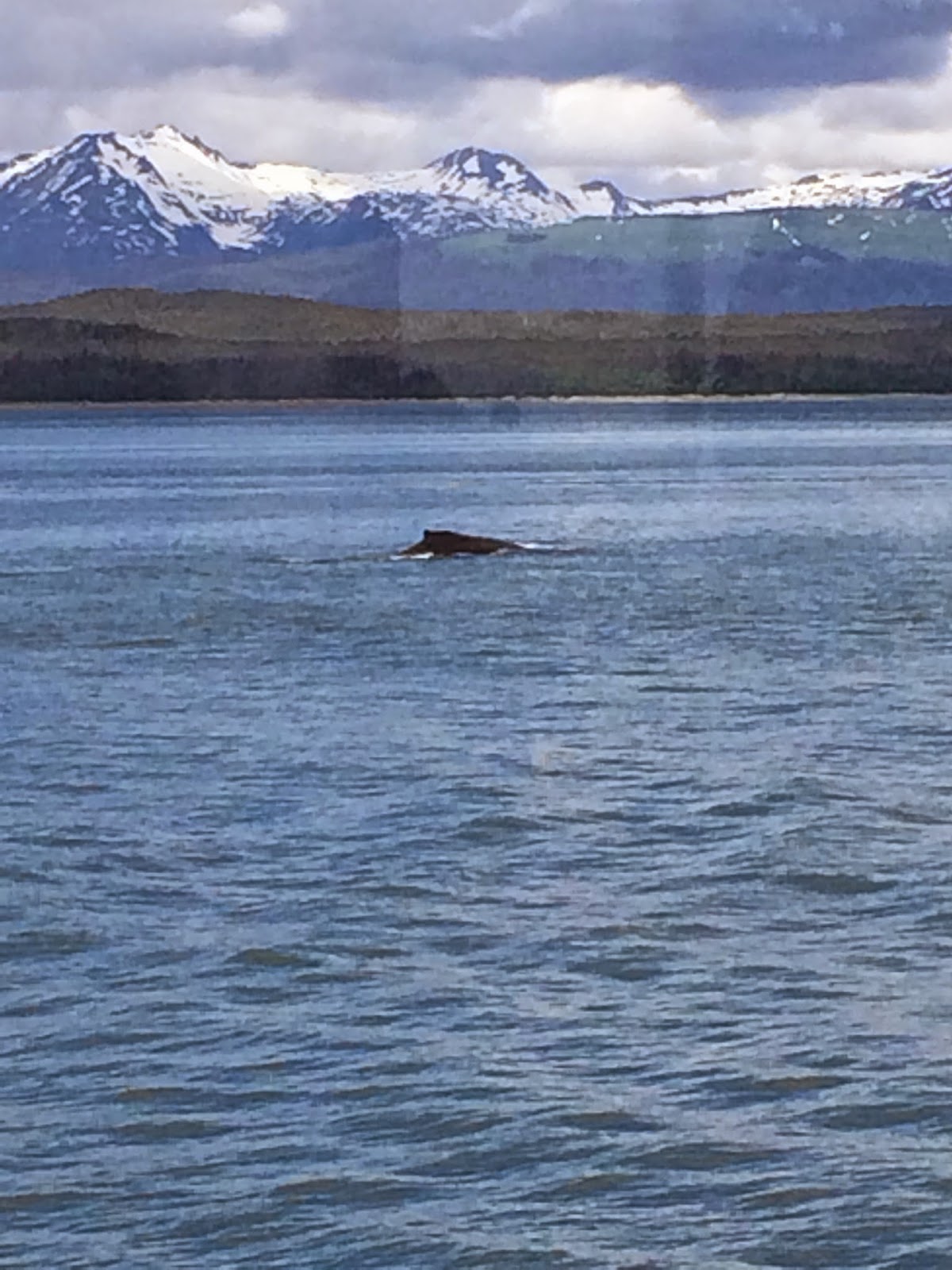 (Hey, Sparky, what about the whale watch?) reminds Eldo.  Well...we didn't see a whole lot, but we did learn a few things. The humpback whale, the most common whale in Alaska, has a throat the size of a grapefruit. When they are feeding, they eat 1500 pounds of fish a DAY, and they feed for 23 hours straight!

They are just beginning to return from their long migration from Hawaii back to Alaska starting in June and through July. They mate and have their babies in Hawaii.  Stored blubber from eating in Alaska allows them to nurse their calves for about 8 weeks in the warm Hawaiian waters. The babies gain 7 pounds per HOUR while nursing! Then, when the humpbacks are ready to migrate back, they do it WITHOUT EATING all the way back to Alaska. Alaskan waters have the perfect environment with all the plankton, plant life and long sunlit days for optimal feeding for the whales. So the whales are starving when they get here, and all they care about doing is eating and gaining weight. They don't play early in the season, they are not showing off--no breeches, no playful fin slaps, just a gentle curve of their backs and down they go again. We saw two on the trip....We are thinking that this is really not the best place but more importantly, NOT the right time of year to be seeing any great whale action out there on the water. 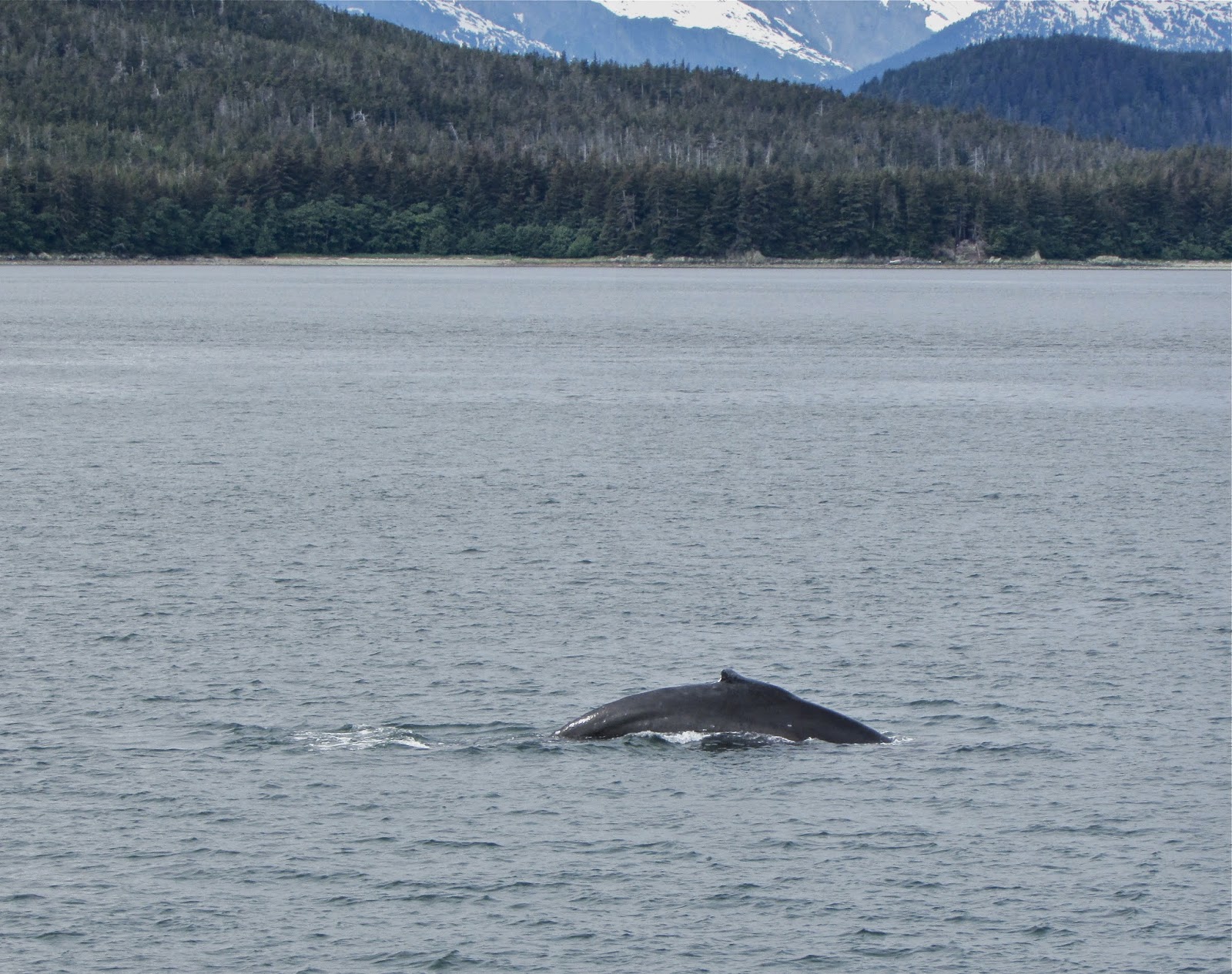 Downtown Juneau is basically a one main street deal....The same in Skagway, the same in Ketchikan. Walk up and down the main street a few blocks and you've seen the town. LOTS of jewelry shops--guess they think you will fall for Alaska being the gem state (it's not, it's Idaho,) or that you associate Alaska with gold and great jewelry prices. Actually, the gem stores in all these towns hope you'll buy from them from the time cruise ships start arriving in May and stop coming around September, and then they close their storefronts, pack up and head to the Caribbean to sell down there when the cruise ships change their sailing patterns. The prices of tourist items in the ports really wasn't bad at all, but we didn't check jewelry prices. There really were some great deals on stuff like tee shirts and other things. Sparky did however, buy a cool scarf that had the look of native American Tlingit artwork on it and a tee shirt for a tee shirt quilt she's going to make from all the shirts from the national parks and travels we did as RVers. Sparky was also tempted to buy this bikini, but NOT for herself...as a gift, maybe? (Well, phooey! says a disappointed E.) She didn't see how much it was. 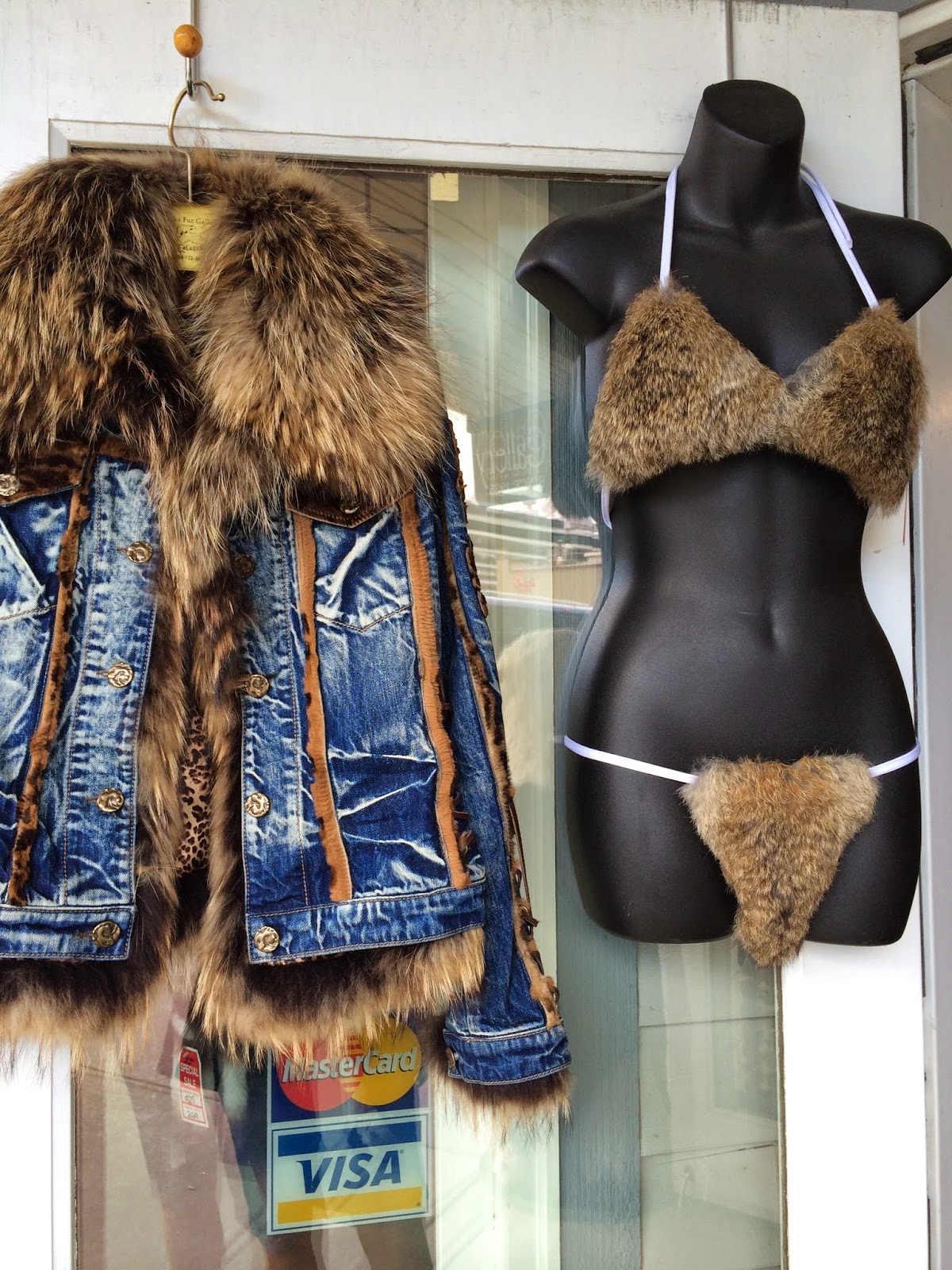 She DID, however, have a close encounter with a bear.... 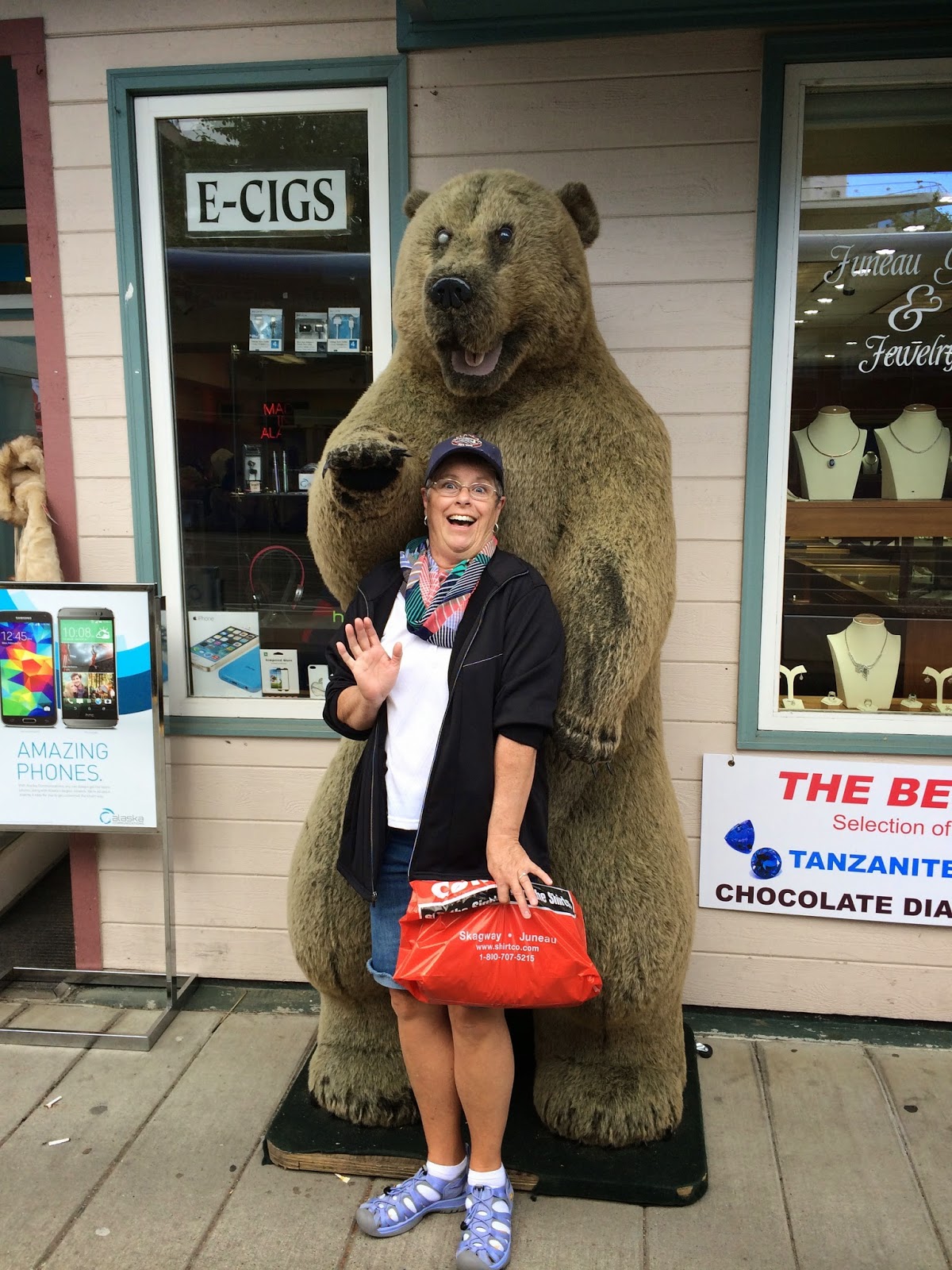 We decided to check out the Red Dog Saloon, supposedly a famous saloon back in the day. It's been redone, of course. But it looked just like an old bar/saloon from the gold rush era and just like the ones you see on old western shows---girls dressed in off the shoulder "madam" outfits, deer heads and antlers all over the place, lots of funky junky stuff on the walls, etc. etc. The staff was a really fun bunch and appeared to enjoy their jobs and interacting with the public.  Eldy liked the beer here.....He said it was one of the best beers he's ever had. 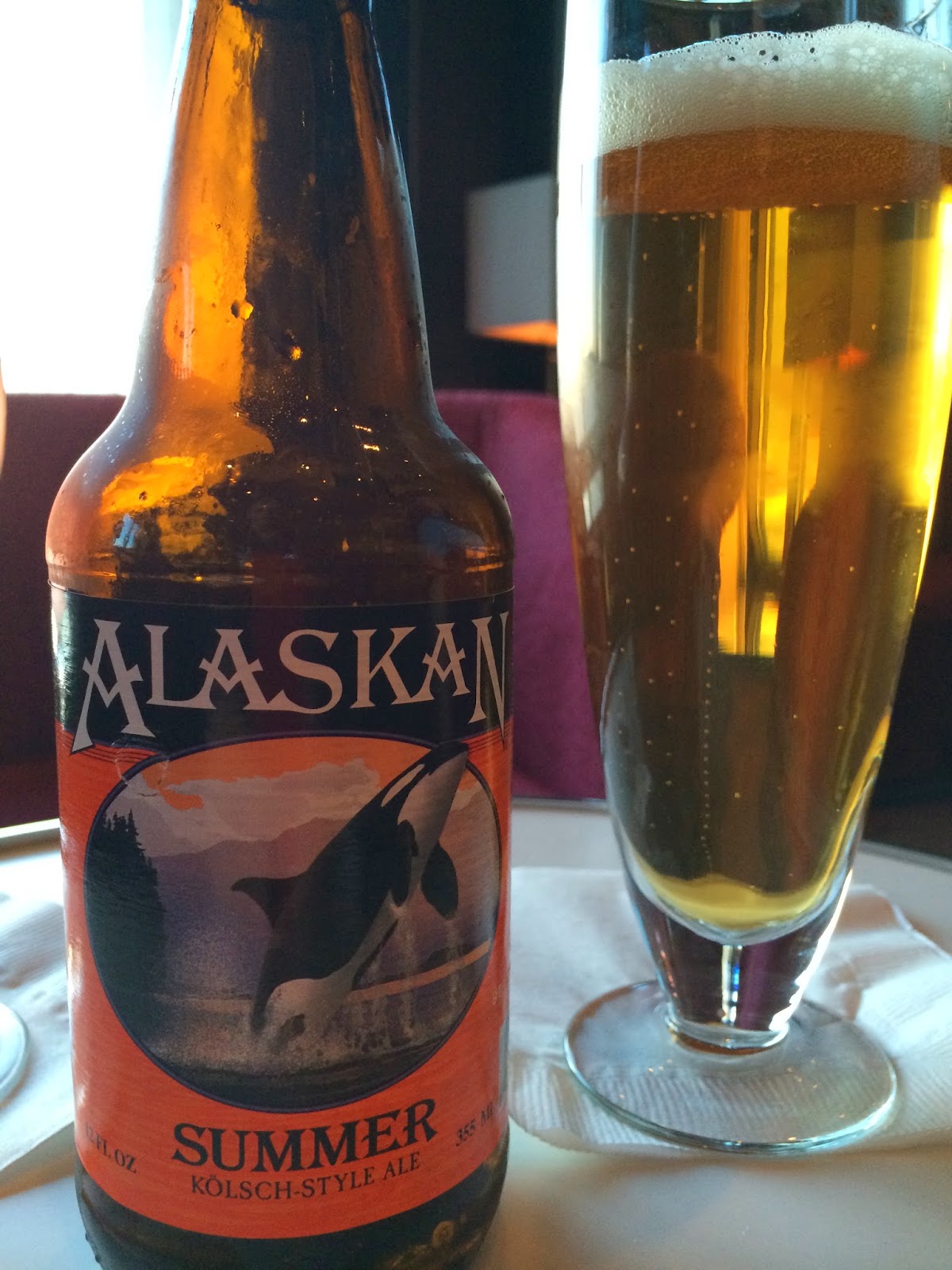 The menu was amusing.... 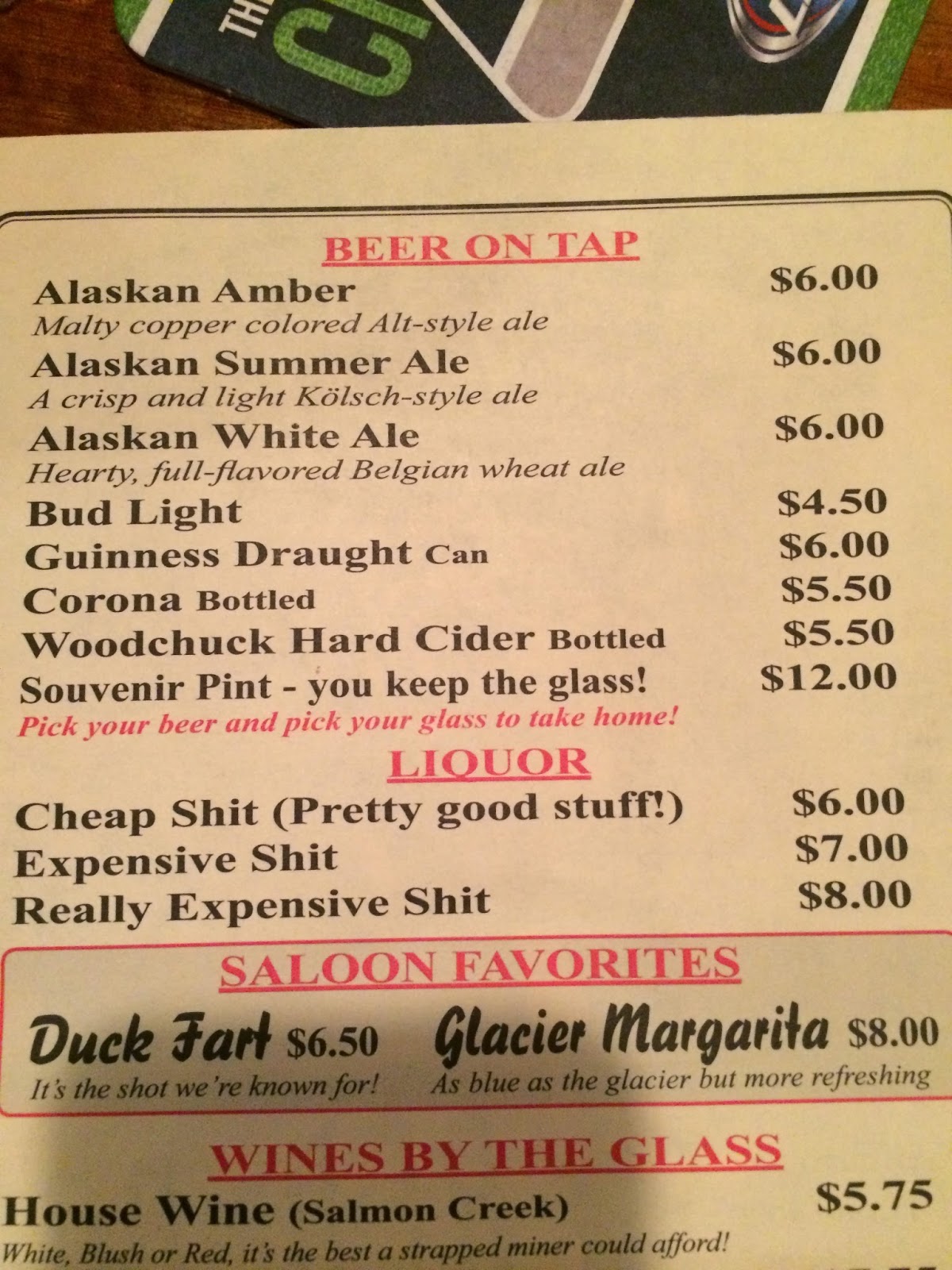 And so was the entertainment...The Great Baldini....about 80+ years old and he still could sing! Every time someone walked into the bar, he'd yell..."WELL, LOOK WHO'S HERE!" Then, "WHERE YOU FROM?" The crowd yelled, "WHO CARES?"  He'd say, "Where you goin'?" The crowd yelled again..."WHO CARES?" He says, "Who's buyin'?" The crowd yelled one final time, "YOU ARE!"
The scenery was getting more and more amazing. It was so wonderful to have a veranda cabin where we could step outside and watch the mountains go by....and the temps were now down to about 58 degrees during the day. It felt so refreshing! 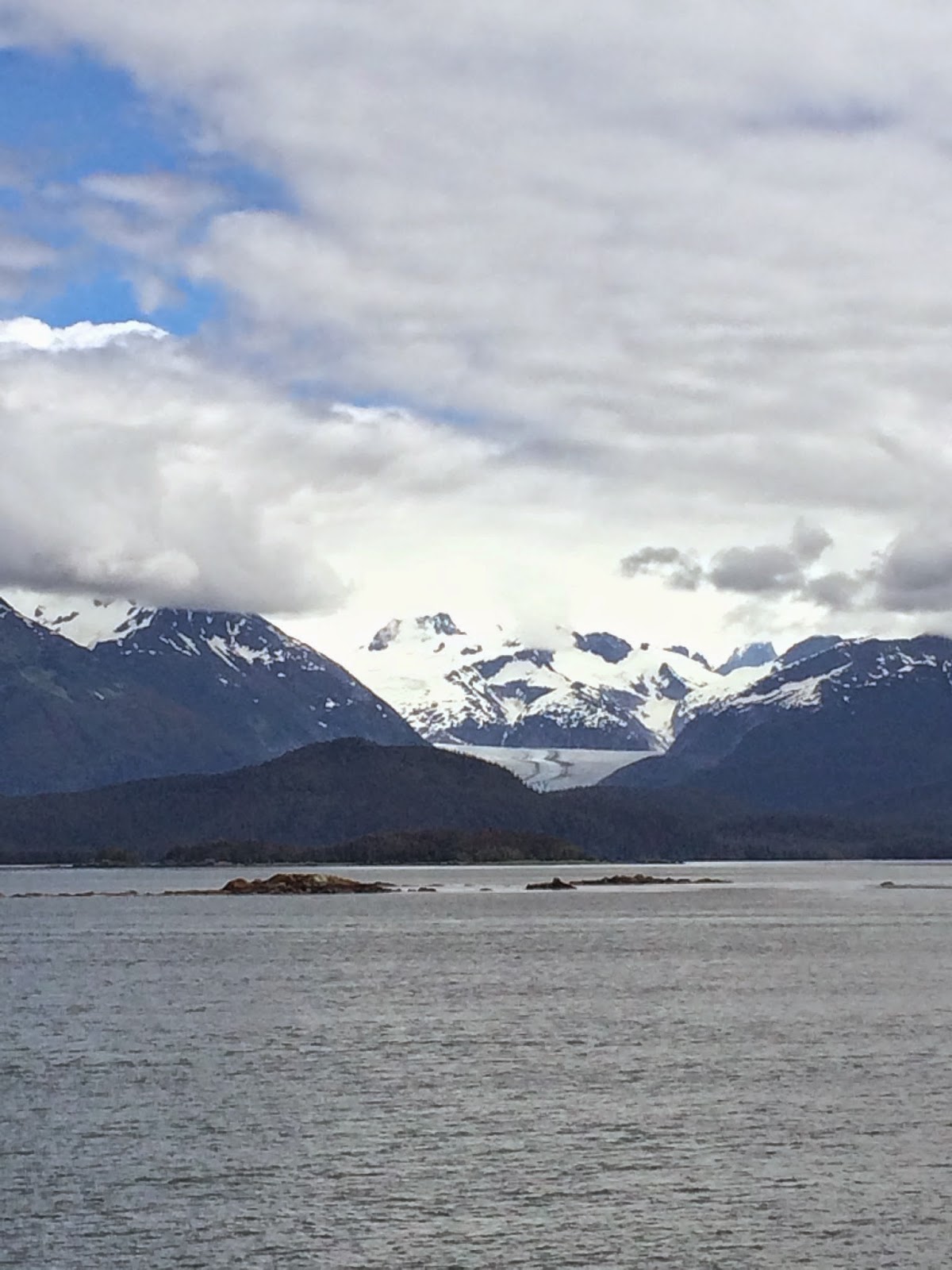 We have two more stops, and they are Sparky's favorites....because a HIKE and a raft float were on the ticket and the final port, a glacier....See you in Skagway!