We were home just two days when we had to scurry to Virginia Beach. Sparky's daughter, Kelly was deploying overseas and the ceremony was to take place in four days. We flew to see Kelly and then were going to drive her car back to keep it for her while she's away.

Kelly booked a stay for us at the Virginia Beach KOA campground, in a deluxe cabin, just minutes away from her work at the Virginia Army national guard, and a trolley ride away from the boardwalk, aquarium, restaurants and other wonderful places there. While she was at work, we could hop on the trolley (1.00 for seniors one way) and be at the boardwalk in about 15 minutes. The trolley makes stops at the other campgrounds and the aquarium on its way to downtown Virginia Beach. How convenient! And, we could revisit what it was like to stay in a campground instead of a hotel, which Sparky just loves and truly misses--(she means the camping explains E.)
The KOA at Virginia Beach is a great place to stay for families, (although it's not cheap). This one was exceptionally nice.....It had a beautiful big main pool, a smaller pool with a water slide for kids, at least two bounce pads for kids, a great camp store, a nice laundromat, a playground, a big sand pile play area and beautiful forested grounds. 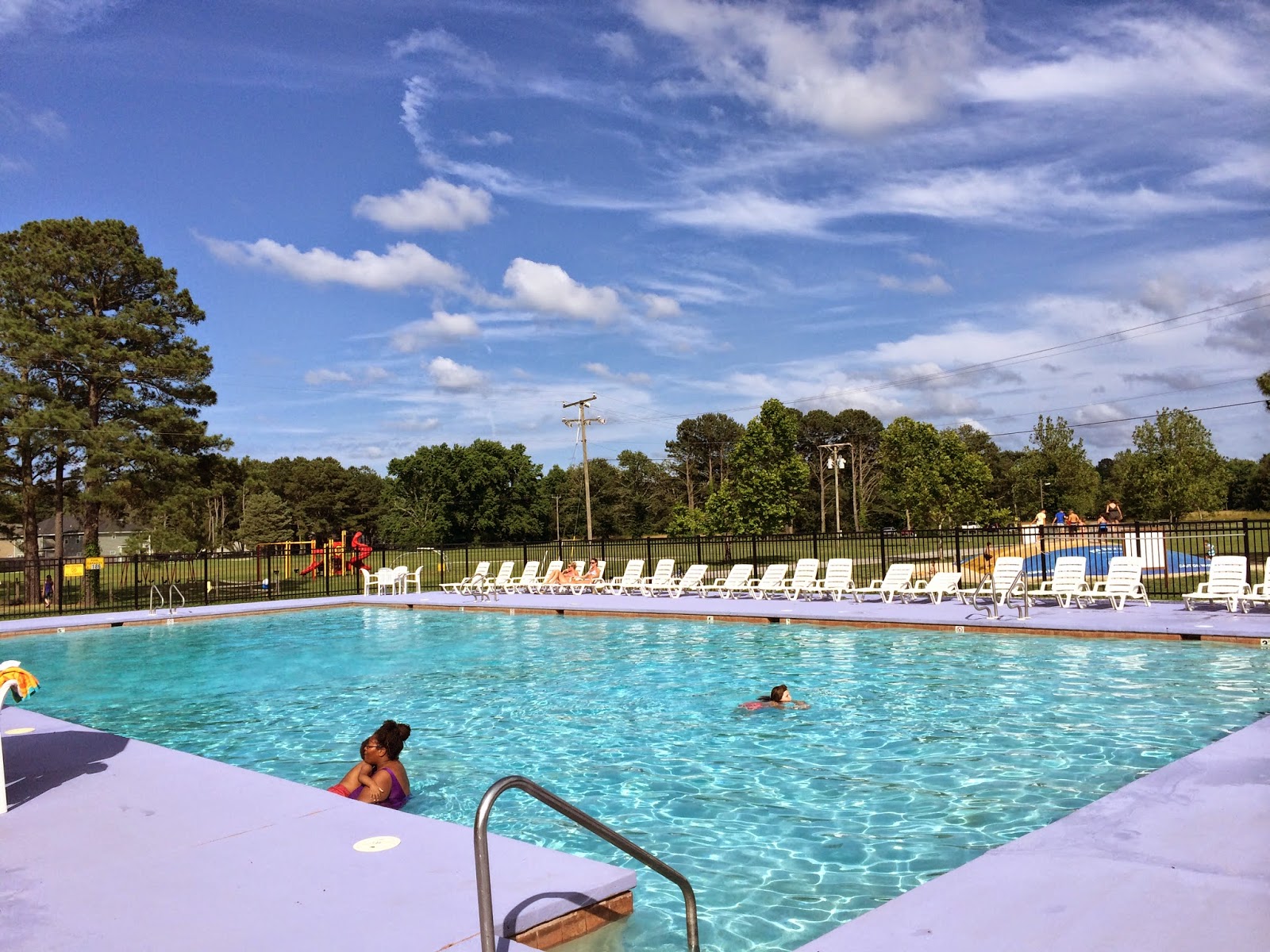 The deluxe cabins were really great...a queen size bed in the master bedroom, bunk beds in another bedroom, and one of those partially coil/innerspring inflatable beds in the living room. We had one of those in the motorhome, and it was VERY comfortable.  Here is the front view. The deluxe cabins were kind of in a circle, like a little neighborhood, so you could see other "campers" as well but they were not too close, so that was nice...a little "neighborhood" space..... 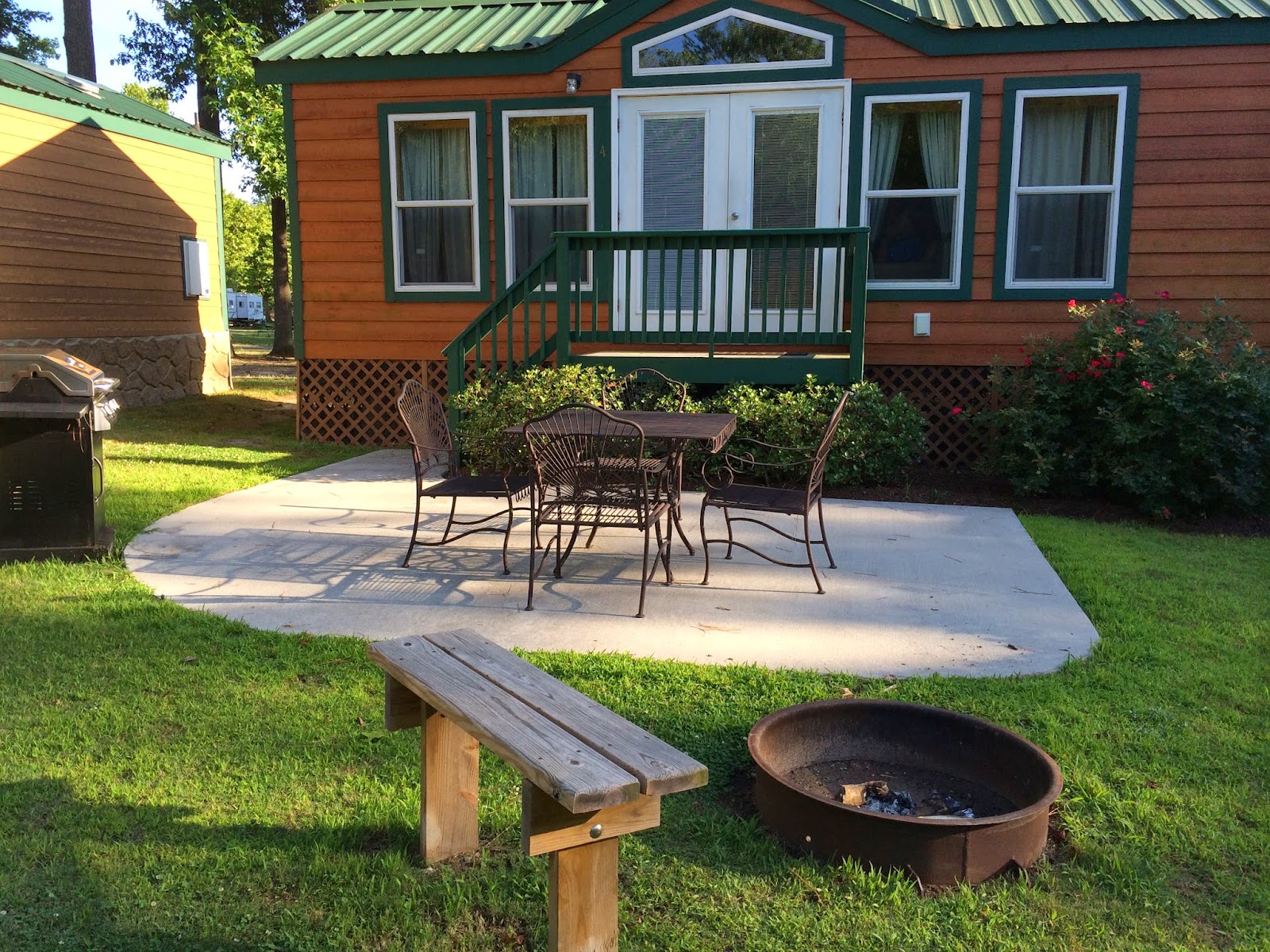 The whole cabin was paneled in knotty pine, and it was cozy! Microwave, coffee pot, little fridge. We were set! 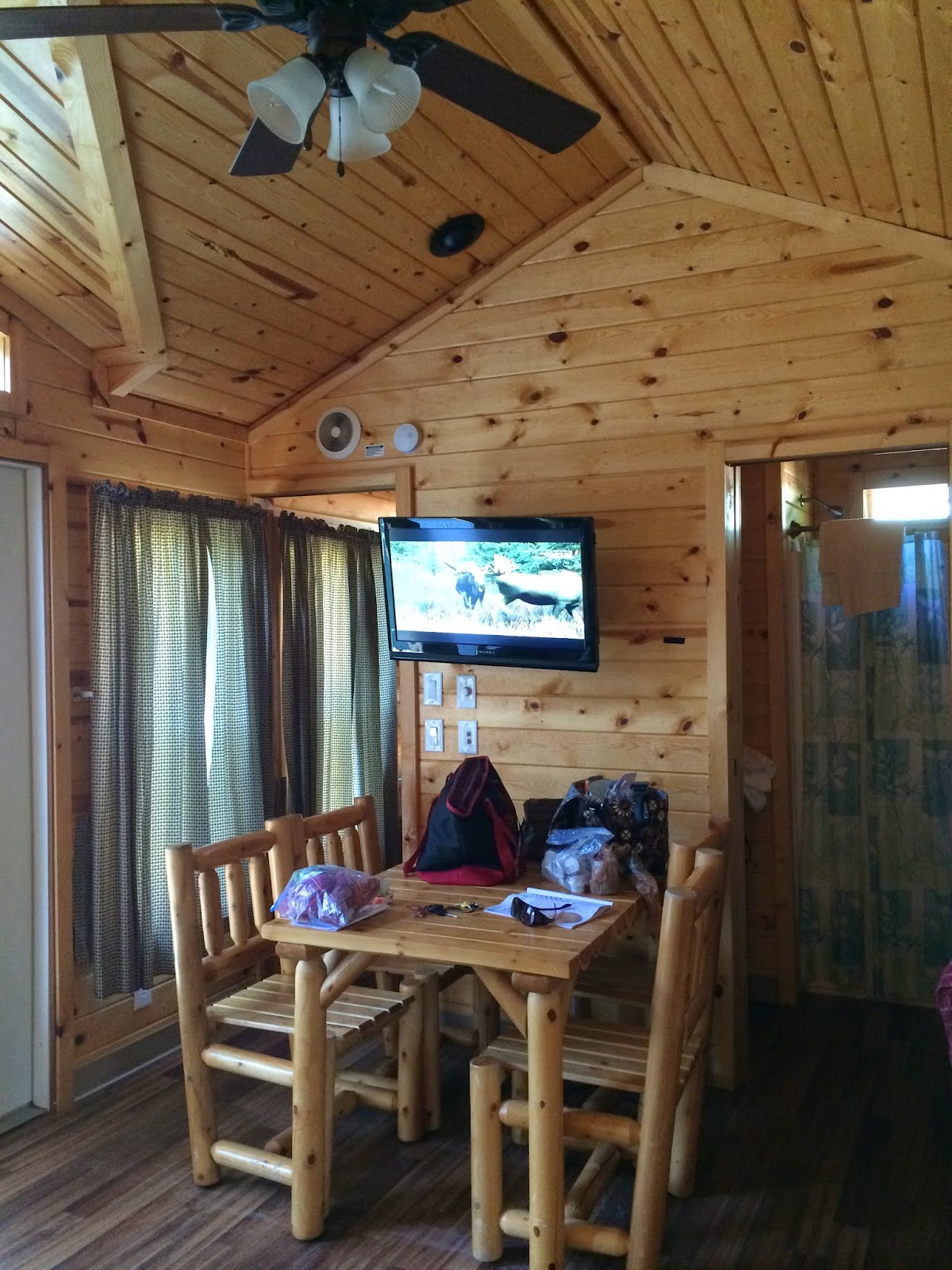 Not only did we have cozy accommodations inside, our cabin had a nice big concrete patio, a fire ring, and a little gas BBQ grill! AND air conditioning! Whew! Sparky DEFINITELY is going to have a campfire while we are here, even if it IS hot! 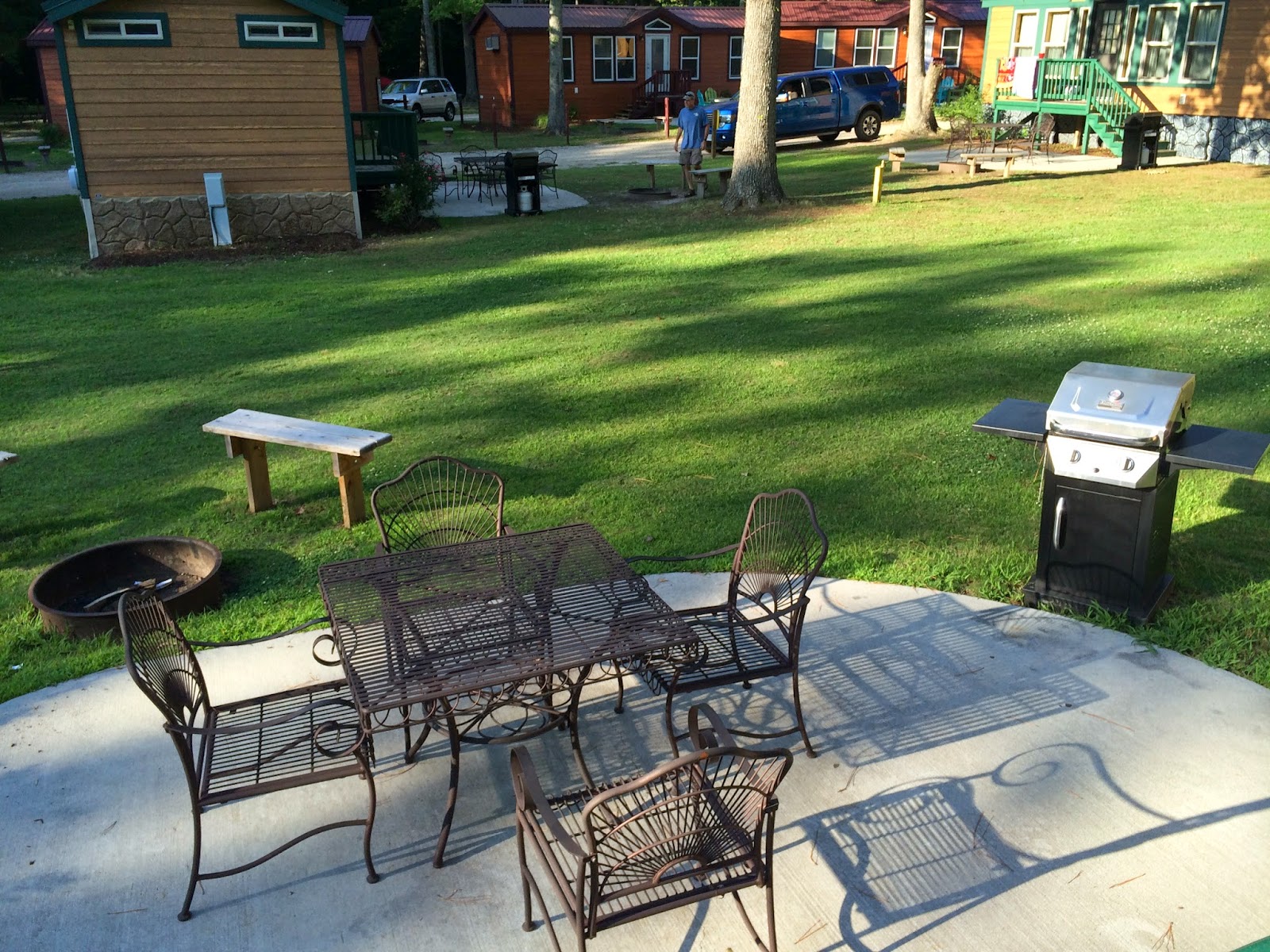 Sparky tried to get out and walk a few times around the park...The roads weren't so hot--potholes and gravel, not paved....She thought about a big rig getting around the park, and yes, there were big rigs in there, but a lot of the sites were not level and a little on the tight side in some parts of the campground. The smaller cabins do not have bathroom facilities so you have to use the main shower room instead....Of course, RVers have their own facilities! 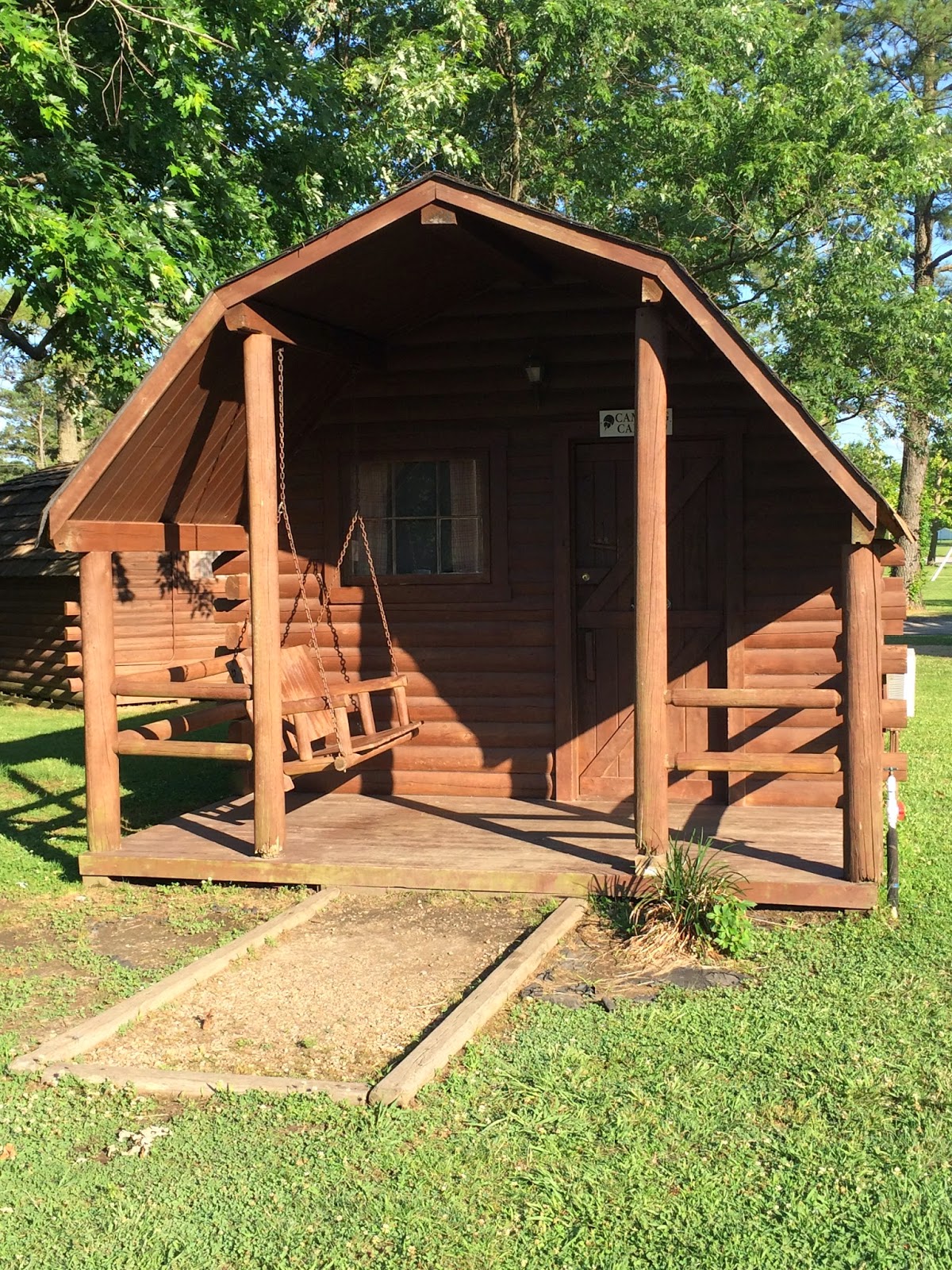 There was a big mix of RVers in the park, from tenters, to travel trailers to some class A's and lots of 5th wheelers. Luckily, there were cabins available for us to be close to her work and her departing ceremony. The only negative we could see, and that really wasn't a problem for us, was due to the proximity to the Norfolk naval station, navy jets flew over the campground on a regular basis. We were actually thrilled to see them and Sparky tried to get a photo but couldn't. Not as many fly overhead at night, so we didn't have any problems sleeping.

Sparky and Eldy are really glad to be here so Sparky can see her daughter and be present for the ceremony. Kelly and Sparky, and Kerry, too, have many fond memories of our camping days when the girls were little. Sparky was really happy to be "glamping" again.....(Glamping means camping with all the comforts of home..."glamorous camping" they call it.)
Time to explore Virginia Beach tomorrow! It's a fun place! See you there!

Posted by Jeannie and Eldy at 8:05 PM