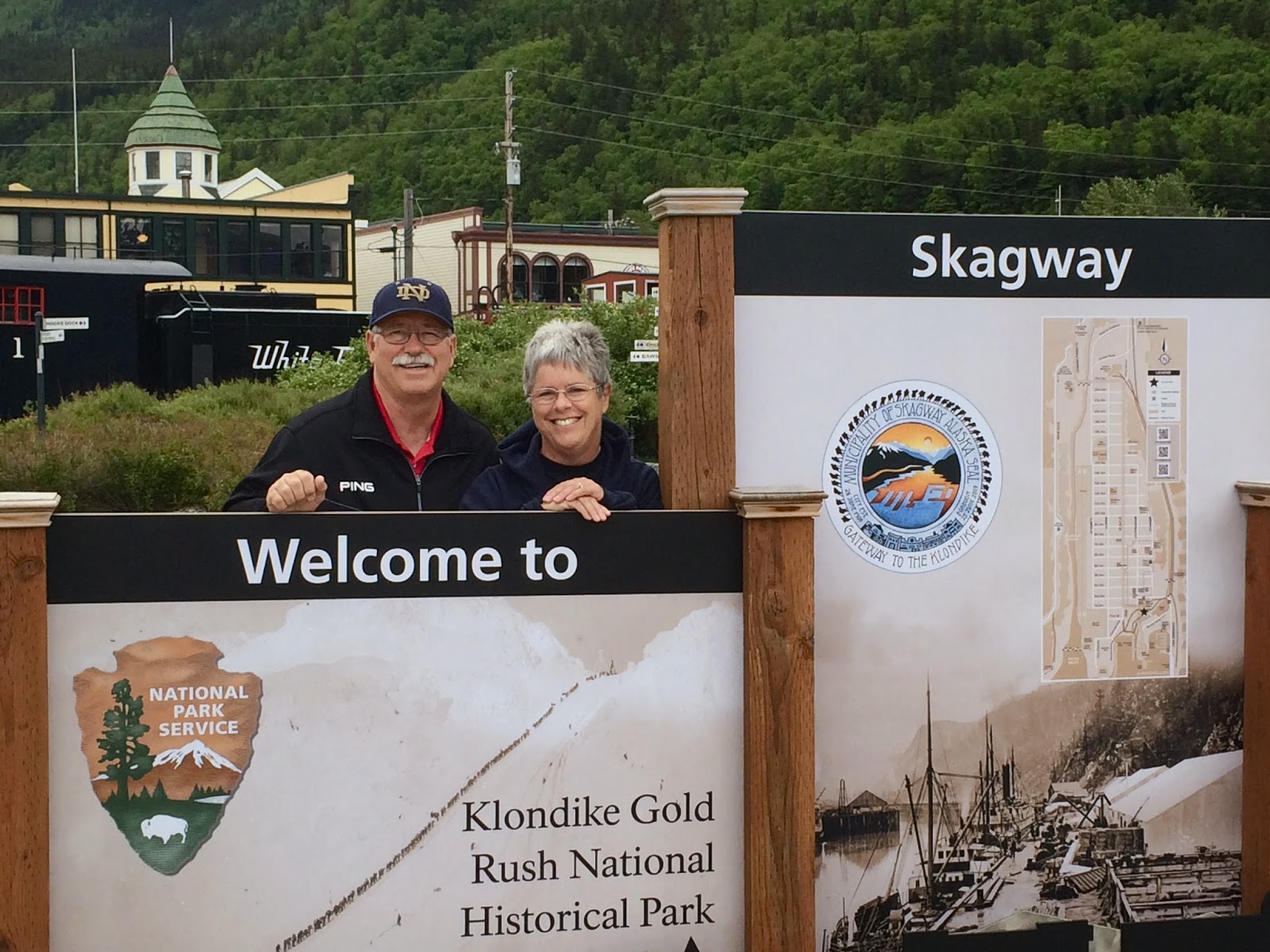 Here comes Skagway....Sparky sees an excursion for a hike on the Chilkoot Trail combined with a river float ending with hot chocolate and cookies...The Chilkoot Trail was the trail blazed by the Gold Rush stampeders to the Klondike in 1897 and 1898. Two mile hike? Piece of cake (er, cookie!). She really really wanted to do the hike, but Eldy was not up to it. So bless his heart, he says, "You go on ahead and do it! I know you will like it." Sparky reads the description--a two mile hike (some of it on uneven ground, they said)  ending with a river float downstream w/cookies and hot chocolate waiting for you," to the tune of about 116.00 a person. COOKIES!? Sparky gets a food reward for her efforts?Awesome! Sign her up! So she went.... 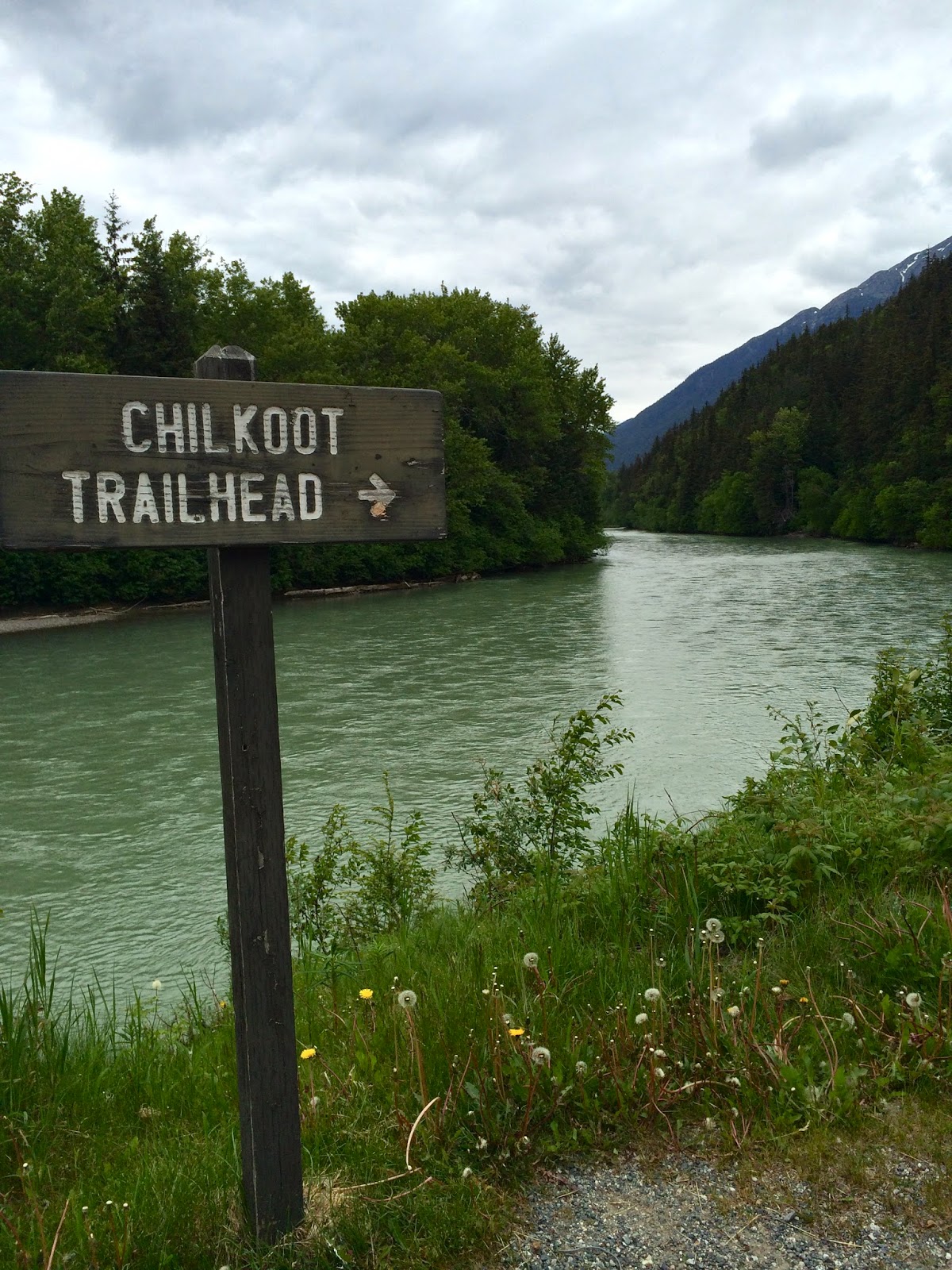 And it was terrific! The first mile or more of the hike was STRENUOUS! Sparky felt this was downplayed in the trail description. It might have been preferable to state something about being fit in there somewhere. Definitely uneven ground, and strenuous because of the steady elevation climb. Lots of roots, narrow places to twist an ankle, and Sparky realized very quickly how out of shape she was. She hadn't hiked in over a year. The trail was a lot alike the ones in Acadia National Park that we USED to do. Sparky's heartbeat was going faster than it ever had pumped before. But the guide stopped often, as the group was collectively no spring chickens in the bunch.
Sparky did her best to appear NOT winded, and was careful not to talk to anybody while she waited for her heartbeat to come back down, as if she did this all the time. Well, heck! She used to! But boy, oh, boy, that was a wakeup call to try and get back into better shape. Riding a bike 10-15 miles a couple times of week is NOTHING in the way of aerobic compared to hiking. And besides that, it's been too hot lately in Florida so Sparky hasn't been riding. However, the legs were no problem, the breath was!

But the hike was amazing...the forest was amazing, so beautiful....We learned some interesting things from Chris, our guide who was relatively new to the area. Did you know sphagnum moss has the same PH as the human body and native Americans used it for women's personal hygiene needs and also for diapers for their babies?  Along the way, we saw evidence of a bear marking his territory by HUGE claw marks on the bark of a tree.....They rake their claws on the bark to keep other bears away....At least that's what the guide said! 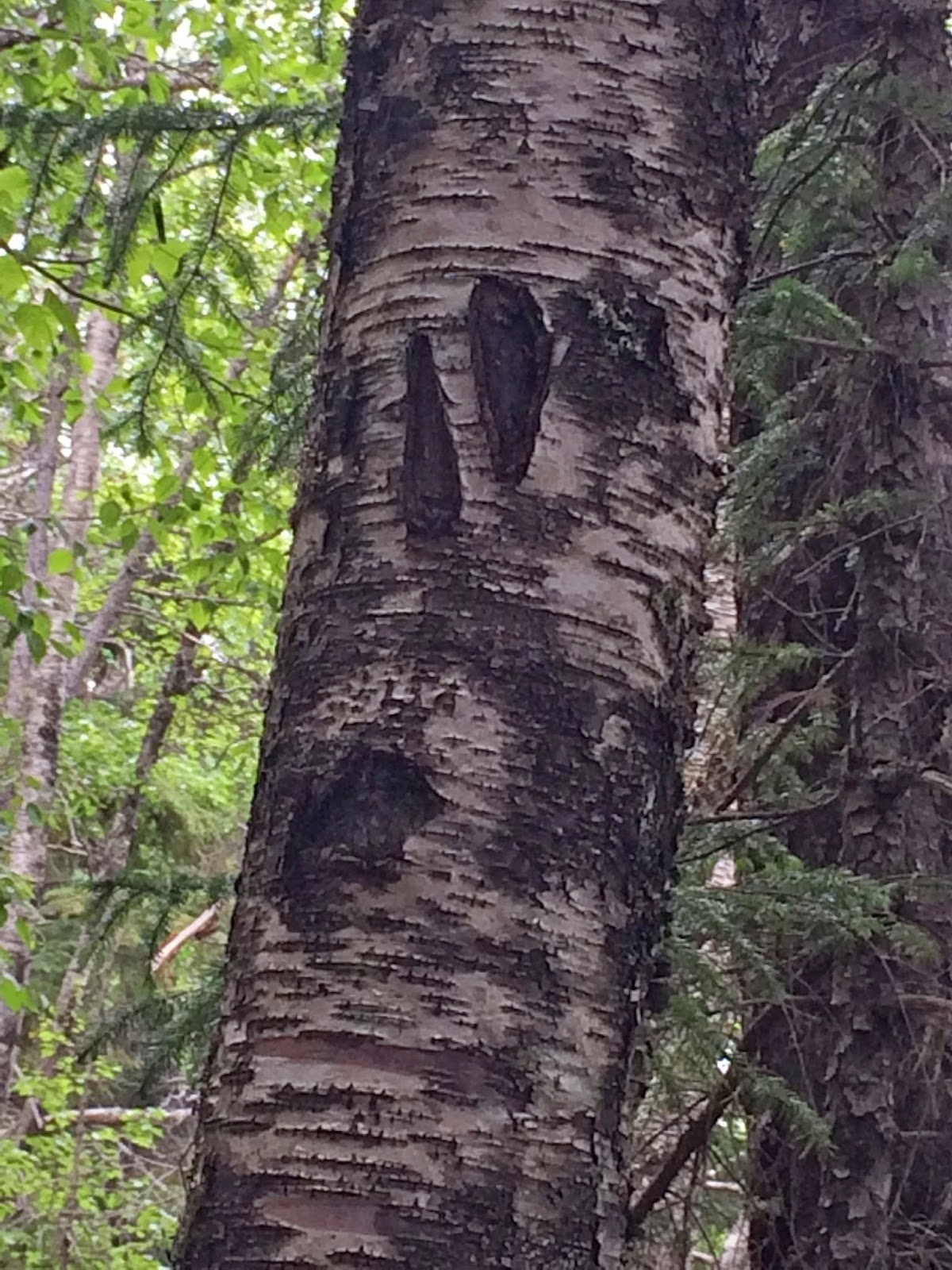 Speaking of our guide, check out his feet. He was hiking in Teva sandals. 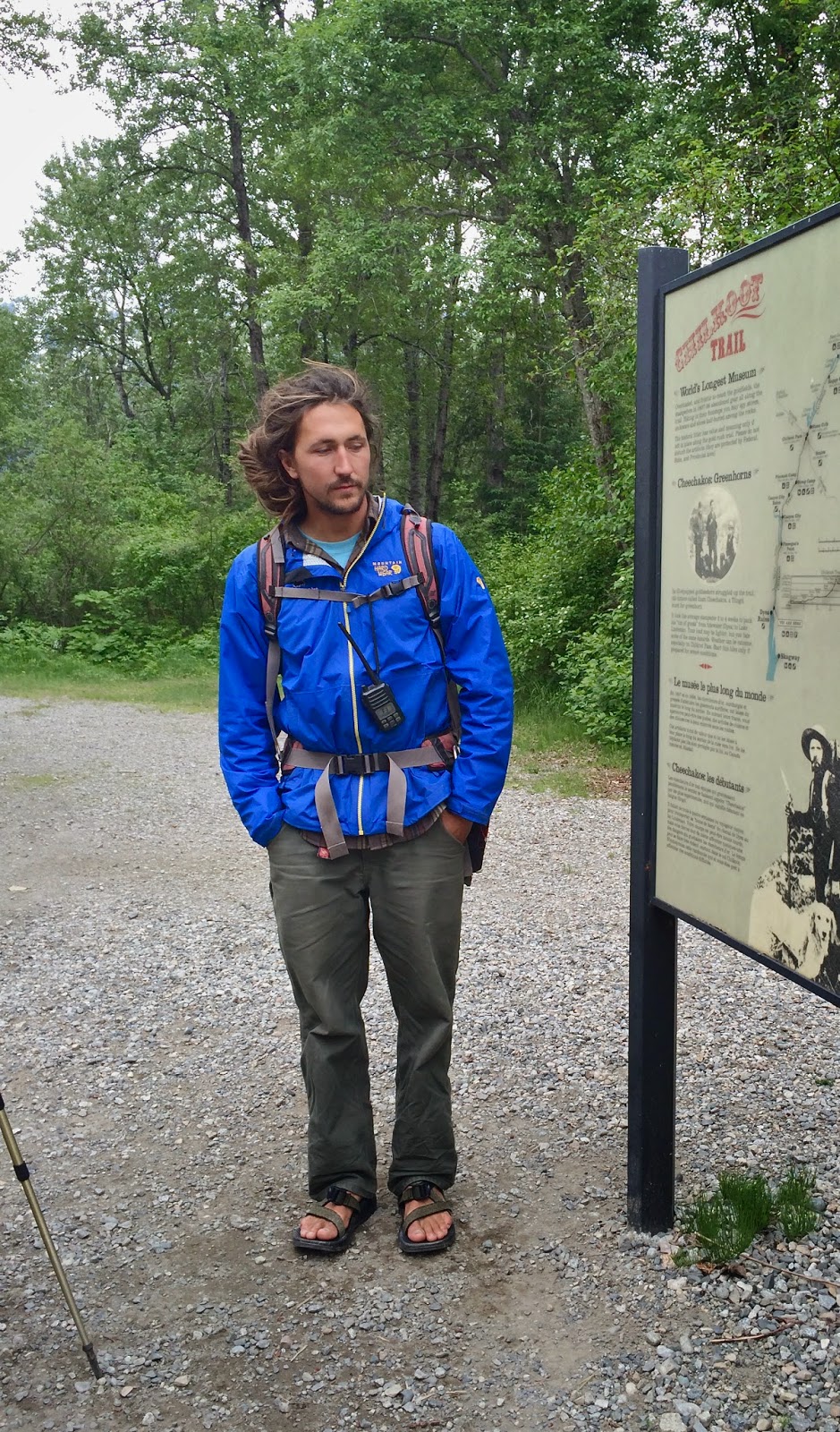 We saw a tree that had been drilled with a bunch of holes by red breasted sapsucker woodpeckers. We could hear the little baby birds inside the tree fussing for food. We stopped for a moment, and here comes the mama to feed her babies. In and out she went for several trips. That was cool!
After climbing the elevated part of the hike, finally, it smoothed out and we hiked about another mile to the river's edge where we were given rubber boots, a life vest and down the river we went. There wasn't really any whitewater, just some little rapids now and then. Sparky happened to mention that she really likes to row. The guide says..."Wanna row for awhile?"  Sparky said, "SURE!" 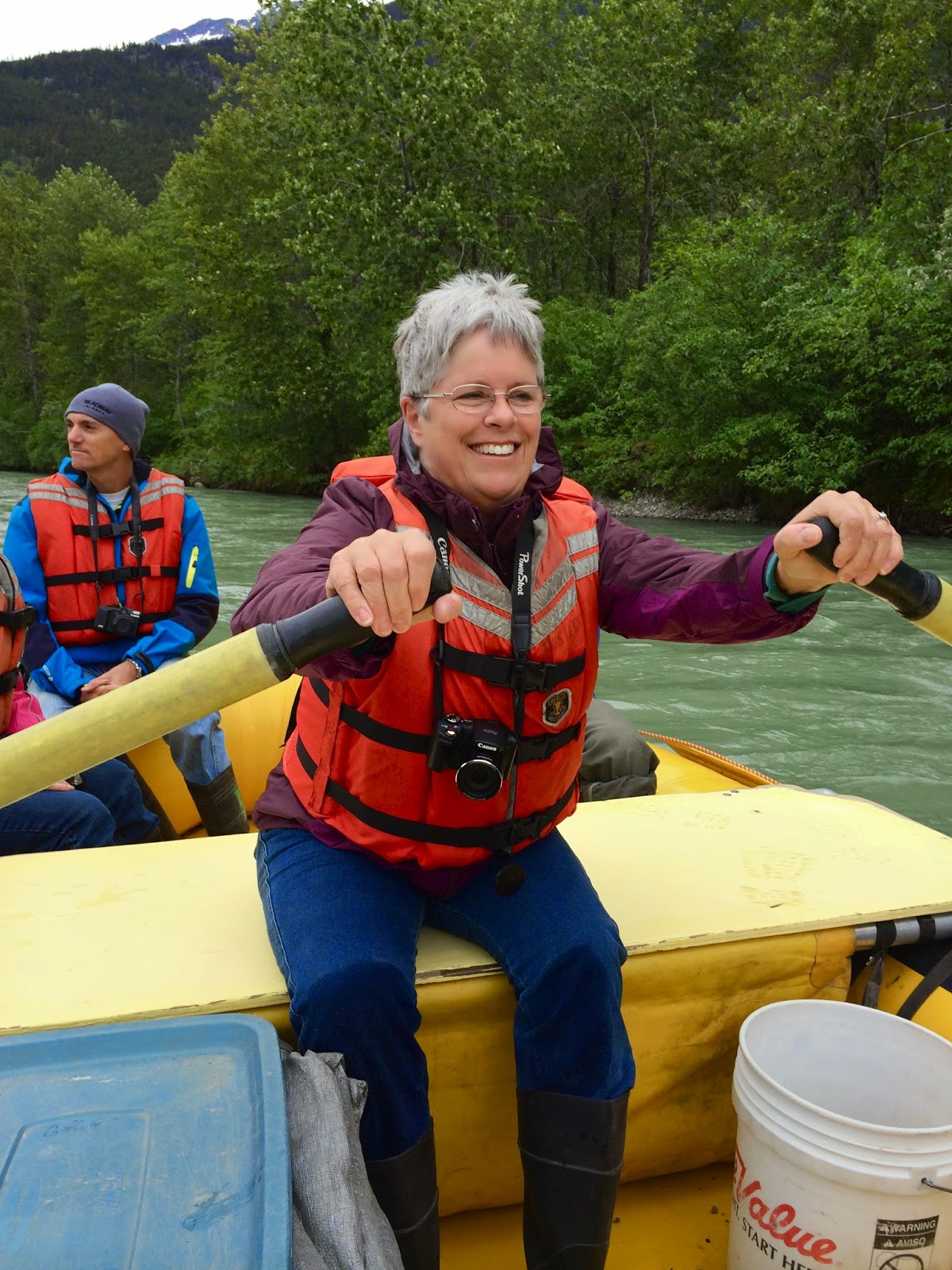 You should have seen the look on the faces of some of the people in the boat. They were like, "WHOA! This is not good." Some guy actually said, in a half joking sort of way, "I don't recall signing anything in the waiver about somebody other than the guide piloting this boat!" But Sparky rowed, sort of, and guided the boat downstream for about ten minutes, having the time of her life.  Cool! 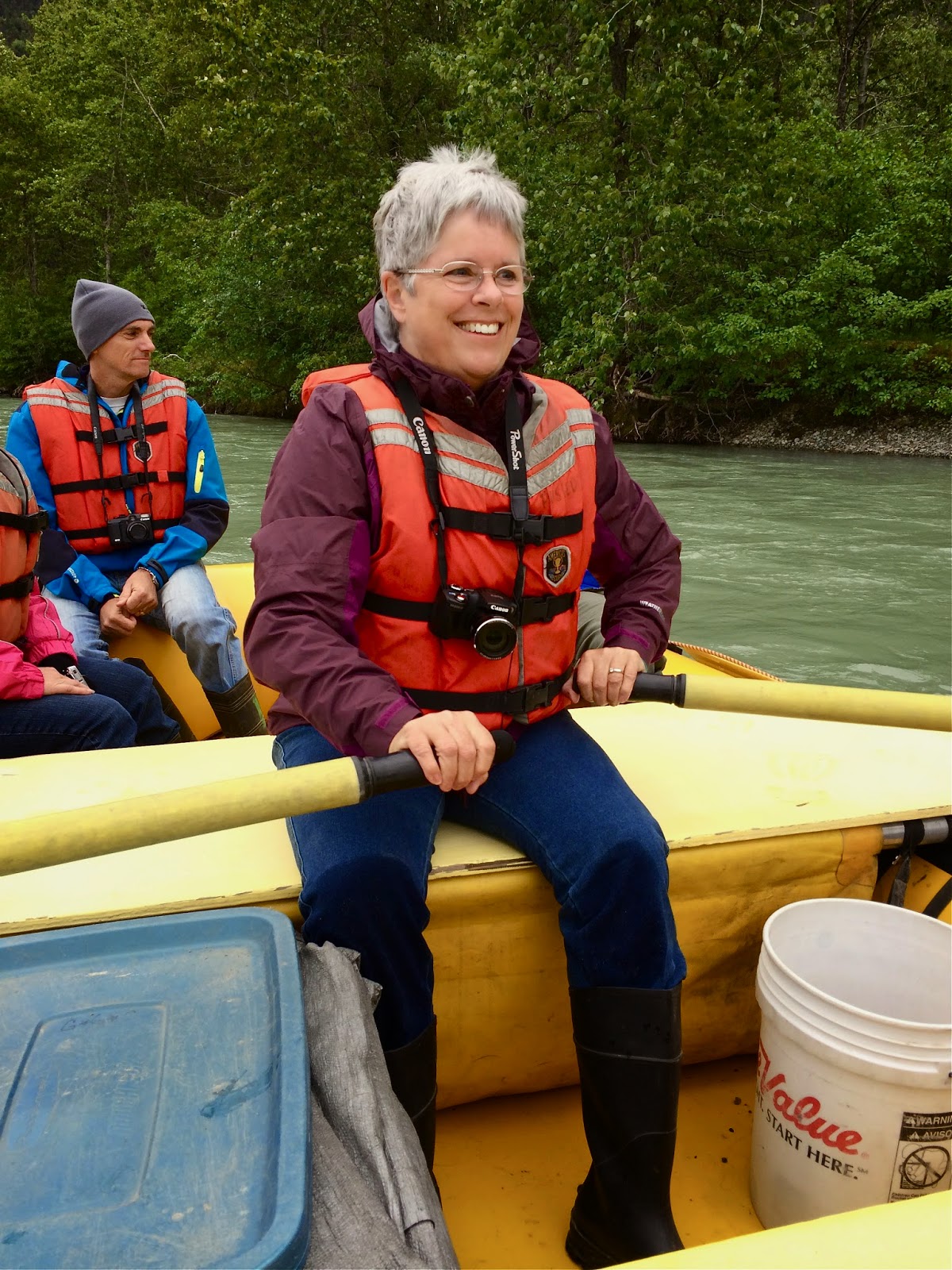 The scenery was gorgeous. Sparky highly recommends the Chilkoot Trail and raft ride back. And the chocolate chip cookies were AWESOME! 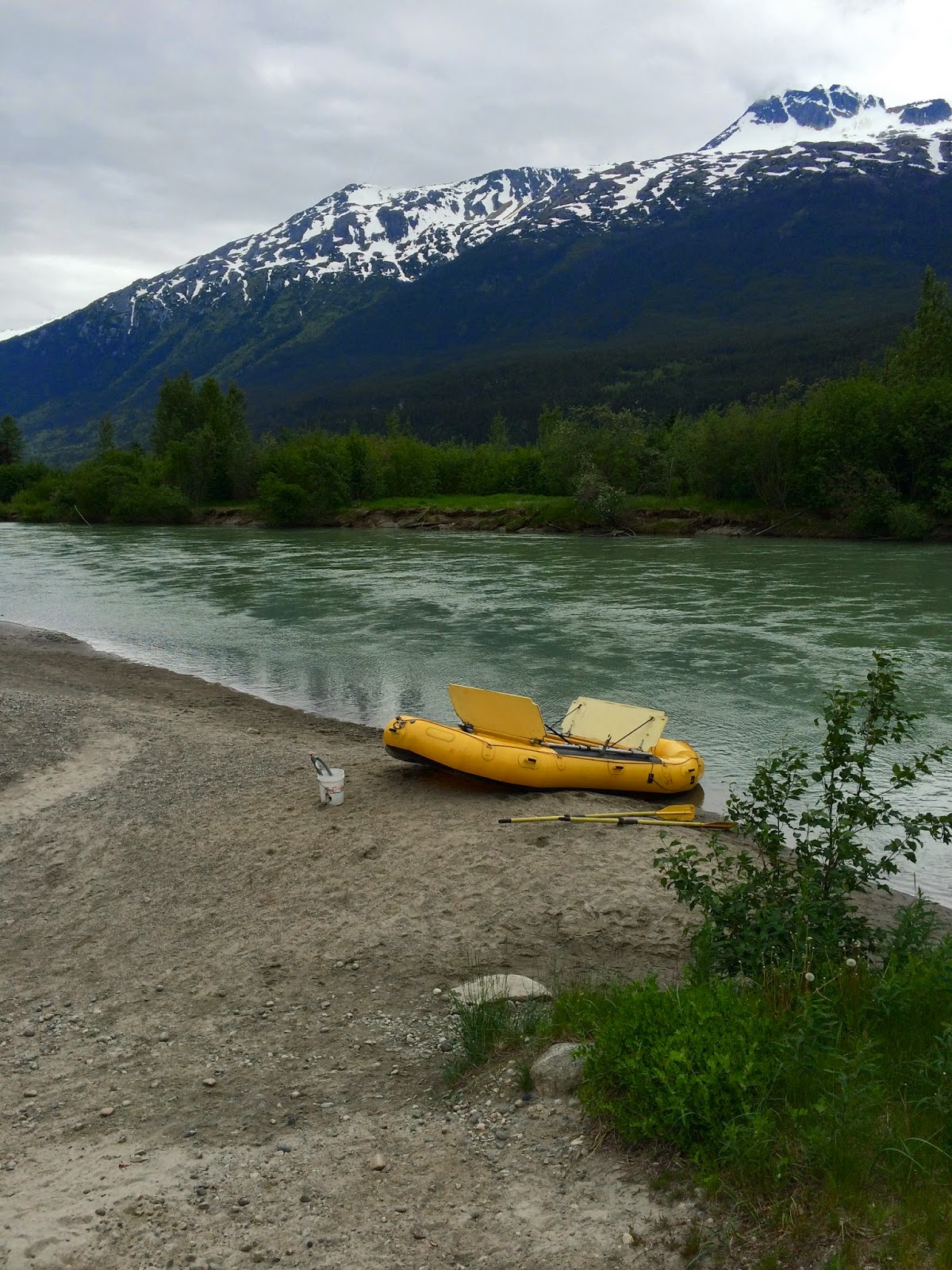 On the drive back to the dock, we stopped at a funky little homestead, no longer occupied. It sure cemented Sparky's opinion that some people who choose to live in Alaska all year round are a little on the quirky side.... 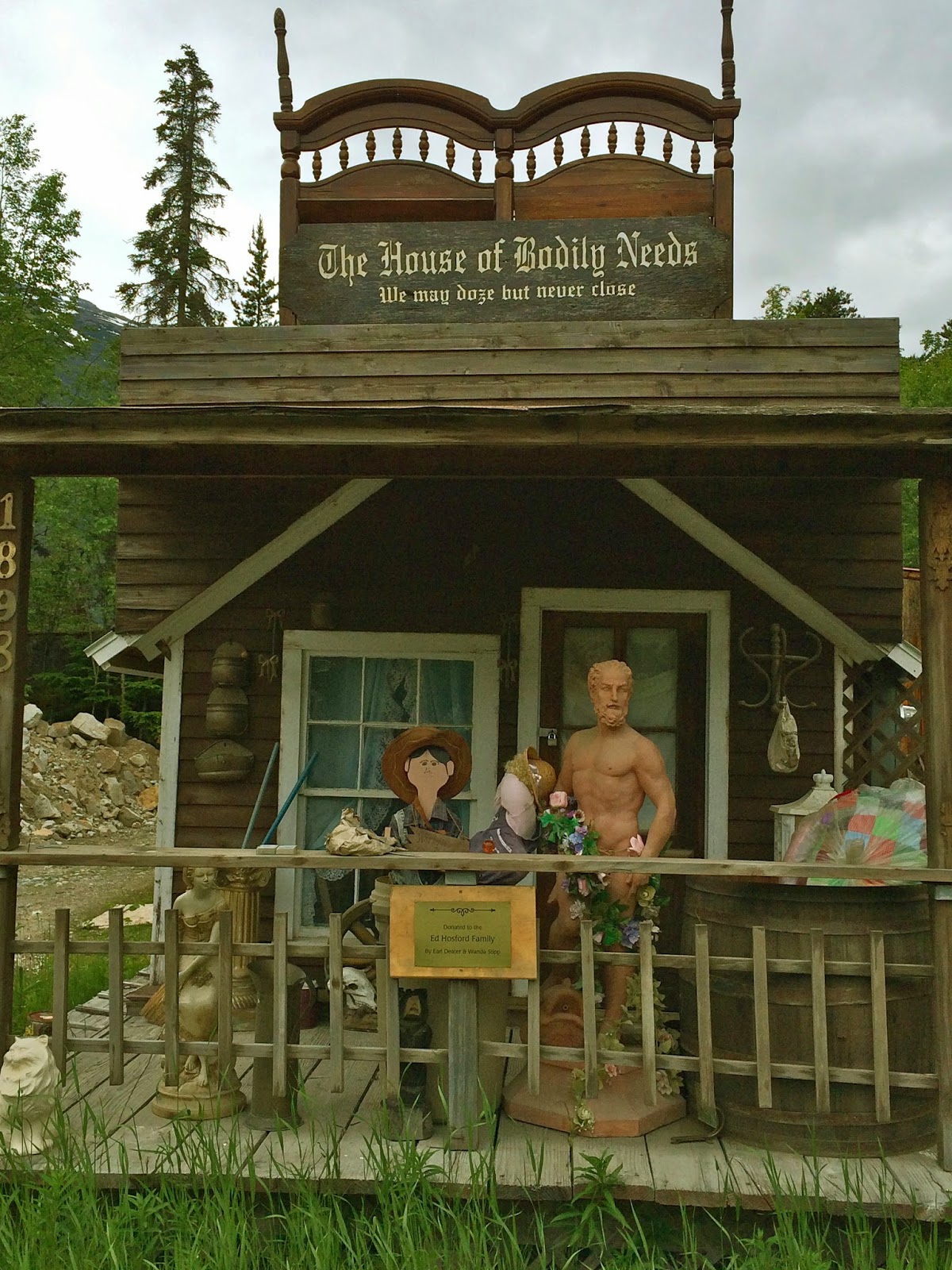 And finally,  we checked out the view from an outlook landing on the drive back. Here is Skagway from higher up, with two cruise ships in the harbor..... 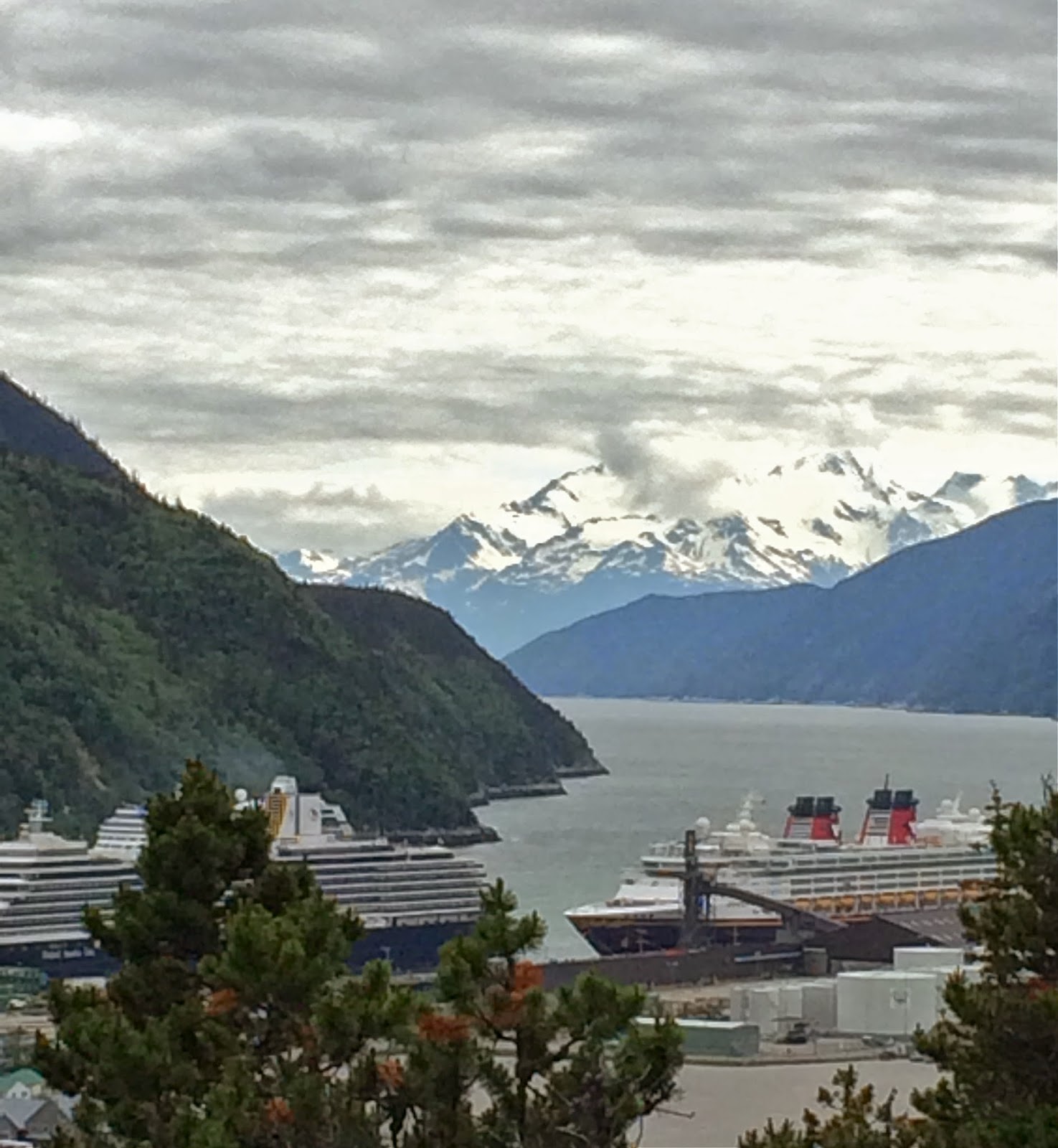 And before getting back on the ship, Eldy met up with Sparky and we explored the little town of Skagway briefly. There's a national historic park called the Klondike Gold Rush Historical Park run by the National Park Service. It's got some nice trails and terrific history to explore if you have the time.

We checked out this rotary snowplow that was used to clear the rail lines in Alaska in the early to mid 1900's. 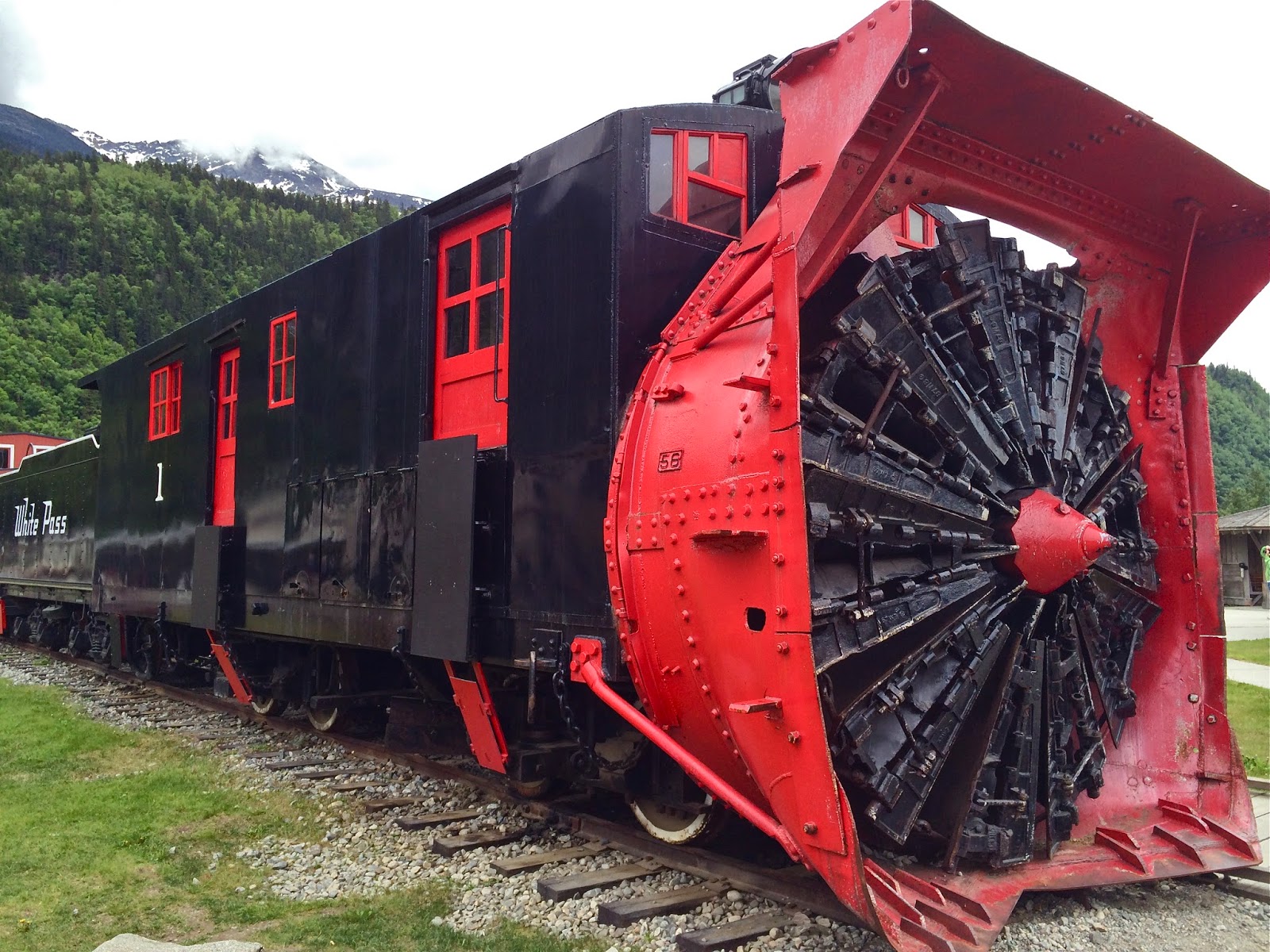