The House Gets a Haircut

Well....one of the dilemmas of a new homeowner is where do the initial outlay of dollars go? Why out the window, of course! And that's OUT the window, not FOR windows. :-) But we decided that after painting, maybe the house trees could use a little trim. There's a right way and a wrong way to trim a tree, and Sparky has probably done most of her tree trimming (the smaller ones) the wrong way. You know, pull out a scraggly branch as tall as you can reach and drag it down and chop- it- off- kinda trimming so we had an expert, an arborist do the trimming for us. The "before"....... 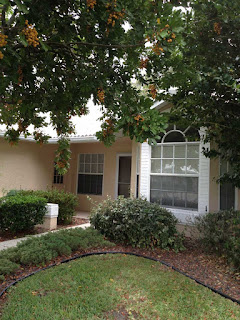 The tree on the left is a carrotwood tree. Sparky thought it was very cool when she first saw it, with all the berries on it. 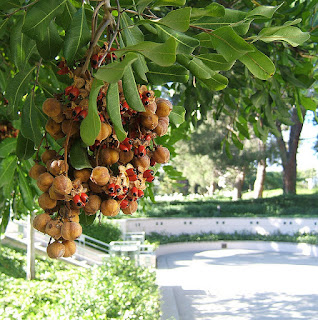 Oh, good! Birds love berries, maybe we'll have some interesting birds to look at! The downside...It's a very "dirty" tree...It throws down lots of junky exploded "pods" and dead berries. Sparky's been sweeping the sidewalk twice a day ever since we moved in and it just keeps raining berries. So far the only birds we've seen are blackbirds noshing on the berries. 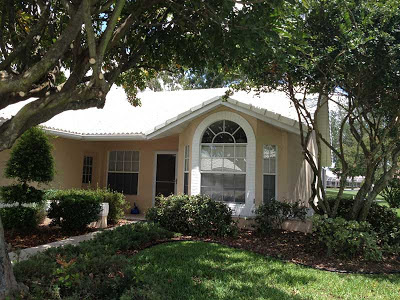 We had the locks changed on the house....It took Eldy awhile to find a good locksmith. LOTS of horror stories out there on reviews and alarming reports of people being taken on that type of service, price gouging, etc. The fellow that came out did a fantastic job, and boy, was he a fountain of knowledge about a whole lot of other stuff that he felt would be beneficial to share to new Florida residents. He has rental properties so he had LOTS to share about everything related to home ownership...Sparky thinks he might have been a little ADD, he was yacking a mile a minute about all kinds of stuff! Pest control--when to spray, how to spray, the scoop on St. Augustine grass--how to fertilize and water it, what height it should be cut, how people take advantage of new homeowners moving to Florida, what kind of locks he recommends...By the way, think a dowel rod in a patio door is going to add some security? Nope! That only holds one door secure. There are better ways to secure a patio door and at reasonable prices. Check out your local home improvement store for more information.

We were glad to learn about some of this stuff! Whew! Kind of forgot how much there is to do when owning a house! But Sparky really loves doing anything in the way of making a house a home and really doesn't mind cleaning. Now, toilets, that's another story! Sparky is gonna have to clean tile floors OFTEN. Certainly gonna take more than the 30 minutes to clean house as it did in the motorhome, lol! ....The bedrooms have carpet so that's nice.

Sparky's mind is always going a million miles an hour making it hard to sleep sometimes. Two 'o'clock this morning, she couldn't sleep, so she got up, and went Etsy browsing for ideas for decor for the house. (ooo-o-o-oh, not good, sighs Eldy.) She saw a wooden silhouette of a mermaid on Etsy...covered in sea shells, selling well over $200.00. She thinks she can make the very same thing for a whole lot less. That would look cool along the long entry hallway, she thinks. It would take a TON of different kinds of shells....We'll see...Eldy is just waiting to see what happens...This is one of those things where you just love it, or you think, "What is she THINKING!!????" Eldy is quietly waiting to see when Sparky is going to change her  mind. It's very possible there WON'T be a mermaid in the hallway, but a copper turtle or some other Floridian decor....NOT a manatee, though, so don't worry.....

Well, gotta run, lots to do.....Sparky's lovin' all the planning and organizing (which is a surprise, sort of, 'cuz she's a little DISORGANIZED in some ways, as you might be able to tell, explains E.) But that's because it gives her a focus every day and things to do, which makes her less likely to get antsy and head out to a craft store or a yarn shop or a bead store, which gets her into trouble!