Well, you know how we said Sparky was feeling better? Not so much....that was a temporary lull...Sparky started feeling feverish again yesterday afternoon, REALLY feverish. Cheapy thermometer said 99.9, but Sparky felt a lot worse than that. Off to an Urgent Care Center, affiliated with Sarasota Memorial Hospital.

Wholly Moley! 102.7 degrees! No wonder Sparky felt bad! She has not had a fever in YEARS...Seriously!  Talked to a terrific doctor, he went through all kinds of checks, but no blood work. He thinks it's either the flu, (did Sparky get a flu shot this year? Nope..."they make her sick"...) OR West Nile virus....Sparky had been bit twice a few weeks ago in the back of the head/neck area. The doctor put her on prednisone for a few days, then a provisional antibiotic IF she doesn't feel better in two days. We both felt that it wasn't necessary to test for West Nile. Sparky is gonna feel better anyway with some kind of treatment.

The doctor said just about everybody living in Florida would test positive for the West Nile virus if they checked them. The West Nile virus has very similar symptoms compared to a flu....And before Sparky could start panicking, the doctor said MOST people don't have signs or symptoms when they've been infected. Twenty percent will go on to develop an infection called the West Nile fever. The symptoms are:
* fever
* headache
* body aches
* back pain
* eye pain (occasionally)
* swollen lymph nodes
* skin rash (occasionally)

Sparky had every one of these except the skin rash.....


In 1% of cases, the West Nile gets more serious...this is the one you read about in the papers, where the infection gets into the brain...This is from the Mayo Clinic:

And this is where people end up in the hospital....As the doctor said, you don't read about the 9,999 cases where people got over it just fine, you only read about the alarming, slim statistics that affect less than 1% of the population who get West Nile virus. At any rate, Sparky is rapidly improving and back to unpacking and moving stuff from the rig to the house. (Sparky is very stubborn. Believe me, I'm trying to get her to SLOW DOWN and TAKE IT EASY! but it's not working, says a frustrated Eldy.)
Sparky wants to get as much done as possible before we head to Red Bay....

Today, the painter started working on the bathroom. With the very very high ceilings, we hired someone. Sparky and Eldo do NOT wish to fall from a ladder trying to save some money. Besides, we don't have a ladder tall enough to reach adequately. (Hmmmm...I might see a Little Giant Ladder in my future, says E. I've been wanting one of those for a LONG time! Now that I'm a house owner once again, I think I'm gonna need one soon!) Boy, talk about a mess. There was old old old wallpaper on the walls, which peeled off and left the paper behind, even after steaming. The guy scraped and scraped. It took all day..... 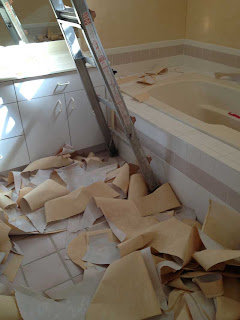 He did a GREAT job priming, sanding, and repairing some damaged areas....
After all that, Sparky thinks she picked the wrong color. Eldo was NOT happy to hear that! We'll live with it, then we can always change our minds. (You mean, Sparky will change HER mind! reminds E. I'm just gonna go with the flow.) Sparky can be a little impulsive when it comes to making decisions.
(A LITTLE????? clarifies E.) We-l-l-l-l-l...guilty as charged. Sparky will just have to be patient and wait a LONG time before changing the color....The colored tile messed her up along with the lighting... 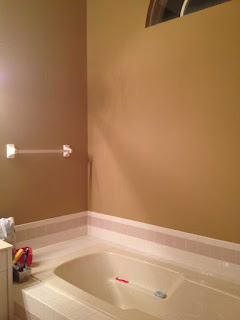 Sparky is going for strong colors this time around. She's had white walls in every single house she's ever owned. Eldy is being VERY flexible on this, thank goodness! He digs in his heels on other stuff (which hasn't done me a whole lotta good, fusses E.) But Sparky is going to let him have full rein on the "Man Cave Room", so cheer up, sweetie!  :-)  Actually, he likes the colors so far...  Whew!

P.S. Sparky will be getting a flu shot this fall....