All Over the Place

Warning: This blog is all over the place...(that's because Sparky is A.D.D.--she has attention deficit disorder, we're pretty sure. Never officially diagnosed, but boy, does she have an attention problem BIG TIME! explains E.)

Ummmmmm...what did we do today? We went to a craft fair in downtown Venice...a rather small one. But Sparky enjoyed herself. She loves talking to vendors, finding out more about their crafts....She talked to Marisa Lugar at Divine Designs, who makes wind chimes out of beads, antique glasses, driftwood, all kinds of stuff. (E. says you can see why Sparky might like this kind of thing, it's a hodge podge of stuff, just like her craft corner in the RV!) Many vendors say no photos, understandably so, so people don't go home and copy it and sell it on the internet the next day. But these folks let Sparky take a quick photo with her iphone, having forgot her camera today. Phooey! 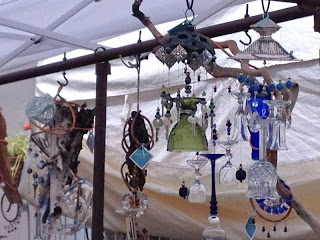 Check out this booth that was getting a LOT of attention--Sewing All....Velcro and fabric doggie harnesses with matching sunglasses for your pooch,  a bazillion of them! Step in harnesses, leashes, collars and carriers were all over the place. 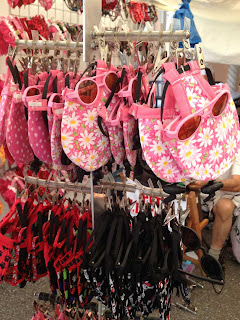 Venice is that quaint artsy, fartsy touristy downtown with all the dolphin and turtle statues. You can find them all over town. 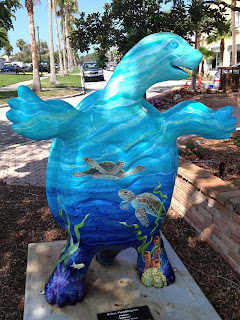 Speaking of turtles, which Sparky is into lately, she saw this metal turtle sculpture. She loves it! But didn't buy it. No place to hang it..... 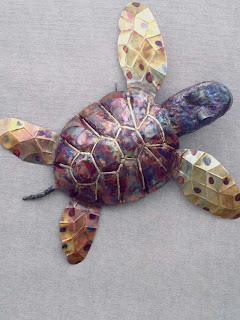 There were the usual organic pet treats, lots of jewelry booths, leather, paintings and photographs. We had seen coin carvers before at the Cortez fishing festival, and there was a guy here today doing the same thing, he might have been the same one. He takes coins of all denominations, many of them foreign currency, and with a special hacksaw blade, carves out sections of the coin and makes cool jewelry from it. 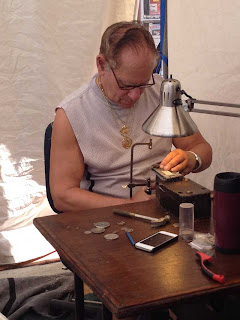 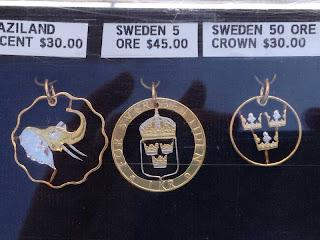 Then it was a trip over to Ellenton Mall to look for some duds for Eldy, as in clothes. He hasn't bought himself anything in a LONG time!  He didn't find anything...We'll have to go on another shopping expedition again soon. Sparky likes to check out kitchen stores, in case they have samples....SCORE! The Gourmet Chef had dipping sauces and pretzels, about 7 different kinds. YUM! This crazy lady was serving some kind of barbecue sauce with a peach flavor on kielbasa. Boy, that was good! 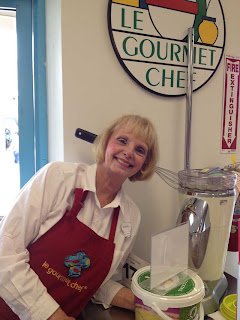 A trip to Costco's to get some cute jammies for Sparky's little grandson, and check out the food samples (uh, that would be Sparky AGAIN, and yes, I make sure she gets three squares a day, laughs E. That girl likes to eat regularly or she can get cranky! Me, I can go with two meals a day and be fine.)

The finale was a trip to Anna Maria Oyster Bar in Sarasota on Tamiami Trail. They have three locations! They have fantastic all-you-can-eat fish for 6.95 from 2:00 PM -3:00 PM, and 7.95 from 3:00-4:00 PM. Fantastic fish, fantastic hush puppies and a great house salad with romaine, spring lettuce blends, strawberries, blue cheese crumbles and almonds.

All that shopping wore Sparky out...Neither one of us really likes to shop, but it was something to do to keep cool today....Time for Sparky to call it a day.....We'll see you later......Now that wasn't too disjointed a blog, was it?  :-) Sparky was going to throw in the latest about Nik Wallenda and his mother joining him on the practice wire today, but will save it for another time maybe.... :-)   Bye....
Posted by Jeannie and Eldy at 8:01 PM