FINALLY! The call came in. Our awnings came in! We were in Ohio, just a few hours away, hoping that they would call before we headed south and it worked out that they did! 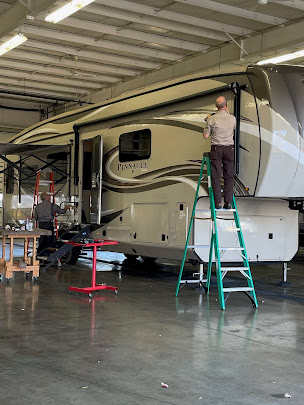 We'd like to give a shout out to RV Connections in Middlebury, IN, and to two technicians, Randy and Brian, who worked for HOURS on our coach. What should have been a two hour job, ended up being an all day job, because the technician we hired in Alabama to take our ripped and torn awnings off after a heavy tree limb took them both out, had to cut the wires due to damage. He zip tied them and did his best to make everything usable for the repairs to come after we had moved on and were waiting for them to come in, but unfortunately, then the awnings had to be rewired and Jayco consulted because the wires were difficult to reconstruct with the new awnings.

We'd like to give Jayco a shout out as well, because instead of talking to the techs over the phone, the newer versions of the awnings presented some additional problems, so Jayco sent THEIR techs over to RVConnections. One of the Jayco techs was Amish, and since they don't drive, two guys showed up from Jayco, (one had to be the driver for the Amish guy!) When we arrived towards the end of the day, we talked a little bit to RV Connection techs, and one guy told Sparky the breaker to the rig shut off sometime during the night. Uh-oh! (When you have a residential fridge in an RV, that's hard on the batteries, it could drain them if the rig is not plugged in and has electric.)

We had tested the connection before leaving the rig the night before, with our surge protector. We didn't want to leave the the big surge protector (about a 400.00 value) unattended at the RV repair place outside the gate where it was to be parked for the night. We were going to stay the night in it, but it was next to a factory and we had second thoughts about getting enough sleep. (She REALLY wanted to stay in a motel so she could have a BATH, explains E.) Busted! By the way, Sparky was SO-O-O disappointed that the water was not very hot at the motel, so there went the hot bath at the Farmstead Inn in Shipshewanna. Oddly enough, the hot water was SUPER hot at the faucet in the bathroom sink. Guess they don't want anybody to scald themselves in the tub. Sparky briefly entertained the idea of using the coffee pot to heat some water and throw that in the tub, but it was a one cup coffemaker. (Eldo is rolling on the floor laughing).

So-o-o-o...back to the RV. We tested the electric current at the source, it checked out ok, we took out the surge protector and then plugged the electrical cord back in. The power went off sometime during the night. Everything checked out ok in the morning. Things were still cold, so we figured it hadn't been off for very long. We were grateful that the tech let us know. He could have chosen not to say anything.

The other great thing that impressed us, was we got a call the next morning from RV Connections saying that the technician had forgotten to plug two holes with caulk, so they wanted to send him out TO OUR CAMPSITE, at least 40 minutes away from the shop, to finish that detail! Again, they could have just not said anything, but that attention to detail and desire to make things right was really terrific, in our opinion. We highly recommend RV Connections if you need repair work done in Elkhart/Middlebury, IN area......and stay at the Elkhart Campground. It's wonderful, and our favorite place to stay when we are in Elkhart. 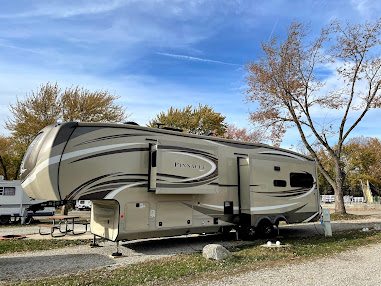 Off we went for a short drive today to stay at the Indianapolis KOA campground. KOA's are on the expensive side, but there are many positive things about them. Usually, they have easy pull thru sites, some being very spacious. 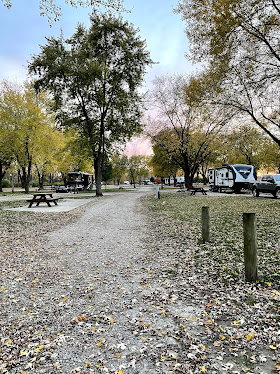 They have a variety of price points and sites for the discriminating traveler. The cheapest rate is usually around 55.00 and that's what we got. The KOA's are usually close to the interstates, fuel, and stores, plus they deliver pizza and ice cream to your site, at least at this one!

In the Indy location, Mt. Comfort RV is within walking distance for RV supplies and repairs, a big truck stop is nearby, and it's easy to get in and out of this KOA and many of them. We are here for one night, then off to Louisville, KY.   Goodnite, all....thanks for reading! 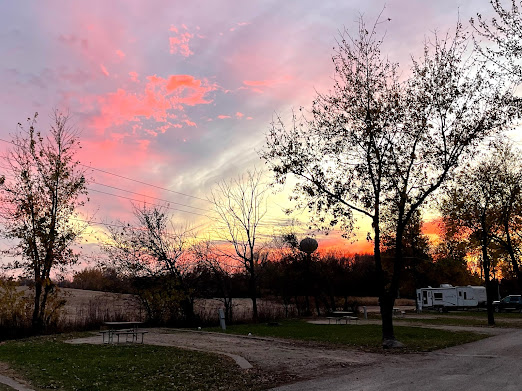 Posted by Jeannie and Eldy at 7:15 PM