Some of the Thousand Trails parks are near good sized towns, often times they are not. Arley, AL was one of THE smallest towns we have ever stayed in, where the Hidden Cove RV resort was. This is the observation deck that overlooks Smith Lake, where the park is located. 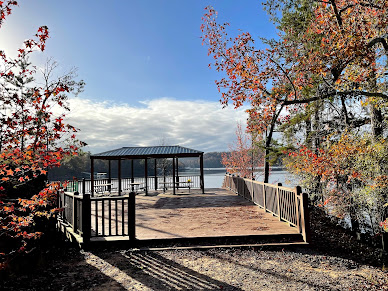 The population is 340. So if you are looking for shopping nearby, even for the basics, you are going to have to drive a bit...25-35 miles to get to something more than a mom and pop grocery store. We didn't mind, we like small towns. This northwest corner little burg has suffered through some hard times, and the county is very rural. We saw a lot of impoverished homes and it's a little sad to see these small towns struggle so much to keep going. 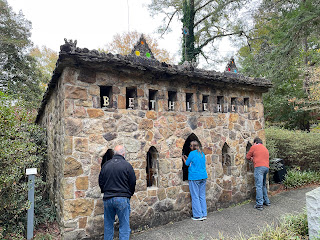 When you check in to Hidden Cove RV resort, they give you a list of nearby activities, so we decided to check a couple of them out. There's the Ave Maria Grotto in Cullman, AL, 32 miles from Hidden Cove. It's a four acre park that provides a natural setting for  125 miniature reproductions of some historic and famous buildings in the world, all constructed by Brother Joseph Zoettl, a Benedictine monk who came from Bavaria to America to become a monk of St. Bernard Abbey. What started as a hobby, took him his entire lifetime to construct some of the most famous religious buildings in the world. 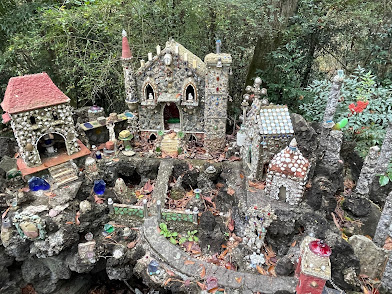 He used bits and pieces of recycled materials, shells from Florida beaches, whatever he could find...one of the buildings has Pond's Cold Cream jars in the towers! He reconstructed most of these buildings from photos, drawings and notes, as he was not able to visit these edifices in person. From Montesurrat to St. Peter's Basilica, he labored all his life to leave this marvelous legacy behind for future generations. 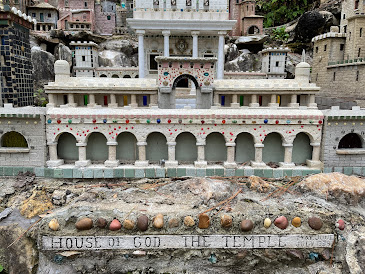 We were a little saddened to see the many buildings overrun with weeds, leaves and dirt. Maybe it was visiting this site in late fall that made the exhibits seem tired, dreary and dirty, but it also seemed as though the grounds were neglected. The admission fee was 6.00 a person. For the uniqueness of this monk's handiwork and the beautiful big gift shop with many religious items and beautiful music playing, we do recommend going to see it.

Our second choice of a road trip was to see the Natural Bridge Park, in Natural Bridge, AL., a 36 mile drive from the Hidden Cove RV park. Sparky loves geological formations and this one was really cool! If you look carefully, you can see Eldy making his way down the stone steps inside a cave with the bridge above his head. 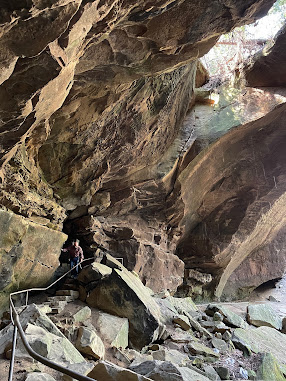 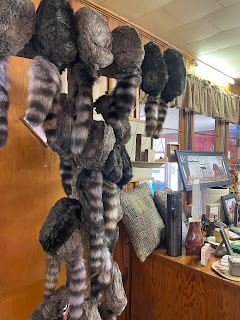 The park is VERY dated...Coming into it, you pass through an old security gate where one can imagine lots of people coming to see this ancient geological wonder years ago. There's a little gift shop where you pay to see the bridge. Admission was 3.50 per person. They are selling local pottery and coonskin caps, too! (Ohhhh, Sparky, you are SO OLD! says Eldo.) But he remembers those, too. haha

Now, other highways take the people elsewhere, and we think this little park is not as well known or visited as much as it must have been years ago. 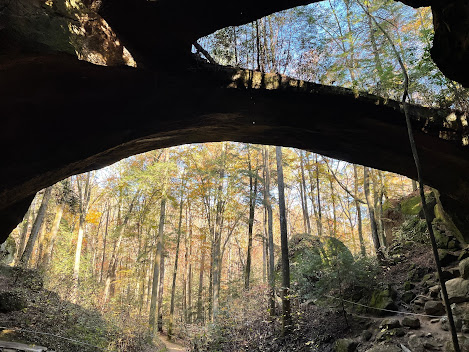 "WOW!"  "This is SO COOL!" "This is REALLY cool!" "Look at this!" (That's Sparky getting really excited about the 148 foot sandstone bridge above her head, explains Eldo.) That little bit of red is Sparky looking up at this amazing wonderful piece of Mother Nature's construction. 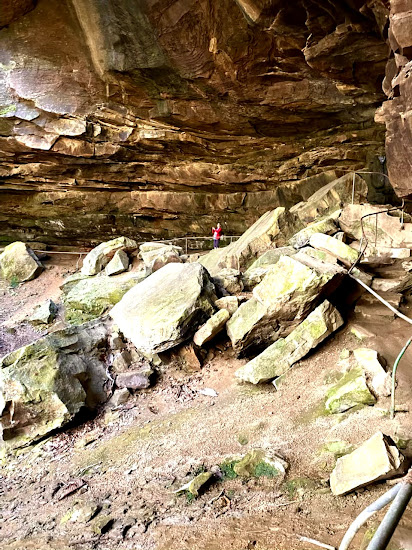 There are two ways to get to the bridge...One is a little trail that winds around, the other is a more direct but little bit rocky path to the bridge. If you have bad knees, it's a little tougher going up and down the steps in the cavern with the bridge overhead. It is NOT handicapped accessible in any way that we could see. Worth the drive? Oh, YES! 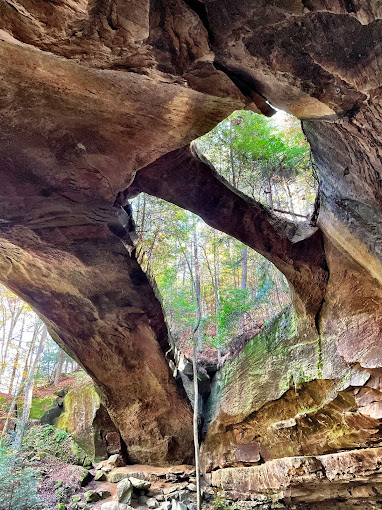 Oh, yes...One more thing. The park advertises an Indian rock face..Can you see it? They say it looks like an Indian head nickel. Uh, OK...maybe....yes. 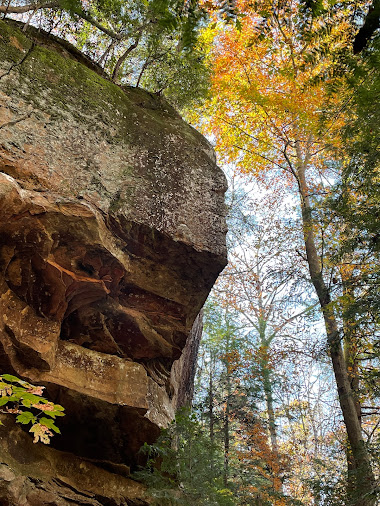 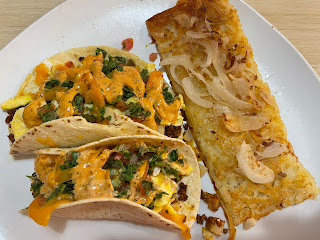 A couple more recommendations for this area, if you come to Arley, AL to stay at Hidden Cove Thousand Trails RV park...Jasper is the closest biggest town where you can find lots of chains and good shopping if you need to get stuff. Jimmy's Egg in Jasper has REALLY good breakfasts and lunches. Sparky LOVES their breakfast tacos, even if they set her mouth on fire with the chipotle crema sauce. Another great restaurant in Jasper is Jim 'n Nick's BBQ..cheddar biscuits better than Red Lobster's? YES and YUM!

The Bankhead National Forest in Double Springs, AL, is 22 miles away from the RV park. Lots of hiking, limestone bluffs and hiking (for next time, Sparky says)....Dismals Canyon, 57miles away..with unique insects that emit a bright blue-green light at night to attract food and mates. Also home to two waterfalls and SIX natural bridges....(dang, missed that one, too! NEXT TIME, ok, Eldo?) He's nodding, sure!....he's such a good guy. The US Space and Rocket Center is in Huntsville, AL, 77 miles away. Might as well make that a day trip away from the campground! And, the Barber Motor Speedway Museum, the largest motorcycle museum in the world. It has over 1,450 vintage and modern motorcycles and racing cars.

And....The Crooked Creek Civil War Museum..Vinemont, 22 miles away...WITH the Clarkson Covered Bridge also in Vinemont...a 250 foot bridge with lattice truss construction over 4 spans. COVERED BRIDGE???? Sparky missed a covered bridge????? Maybe Eldo was still tuckered out from the 13 covered bridges we hit in Ohio when we drove all over the county to find them. Next time, OK, Eldo? (He's nodding his head wearily.) Did Sparky say he was such a good guy? He sure is, he will drive Sparky just about anywhere, all over kingdom come for the right photo and the right hiking or biking trail with nary a complaint.

And with all that, we are headed to another Alabama park this weekend, the one where the tree limb fell on our---SPARKY!!! SHHHHHH....(Eldo is superstitious.) But it still is one of our favorite parks to land, a COE park a little further south. We will be there for two days, then FLORIDA here we come for three weeks. See you later!

Posted by Jeannie and Eldy at 8:07 PM