(Note: Sparky's post about the owls departing and the Run or Dye race was written AFTER this post, so it's a little out of sequence, but she still wanted to share these owl photos and have them posted.)

Sparky went on a LO-O-O-O-N-G bike ride today….19 miles…Nothing really spectacular to report. Sparky is usually looking for a payoff in the middle of such a long bike ride, like a nice restaurant or something. The other day, Sparky headed out for a six mile one way bike ride to Panera Bread for breakfast while Eldy was in Tamp volunteering at the Valspar Golf Championship. But the neighbor apparently left out an important detail, (or Sparky just possibly missed her turn on her own, smiles E., which happens a LOT if you know Sparky like I do), like where to make the turn to get to Panera Bread. At any rate, after ten miles, Sparky was all the way from Bradenton, down to University Drive, which is ten miles on the interstate, down one exit from our exit. No Panera Bread anywhere to be found. PHOOEY! So back she went, another ten miles, then decided what the heck?! Why not have lunch at Wasabi Steak House on I-70, a fabulous spot to have a hibachi lunch?! It was only another couple of miles or so, and sidewalk all the way, so Sparky stopped at Wasabi and wondered why the wait staff gave her a wide berth as she came in. (You didn't stop off at the house to shower? asks a surprised Eldo.) Heck no! Sparky was ticked off at not having found Panera Bread so she was bound and determined and going to reward herself with a nice lunch--the heck with a shower! So she went straight there….Once she cooled freshened up in the restroom and cooled down a bit, all was well…….And she tipped the waitress extra for having to serve an odorous customer. Sparky would not do that again as far as not showering and changing clothes…But she was HUNGRY that day!

Where was this story going? Oh, yes….on that long bike ride today…nothing spectacular, until Sparky stopped off at Jiggs Landing where the great horned owl's nest with the three babies are…high up in a pine tree….The babies have FLEDGED! Which means they have briefly left the nest and FLOWN! To another branch. The three inch rain we had yesterday with 30 mph. winds has just about decimated their nest and probably encouraged them to get going and get out for a bit….
Two were seen today….this is the biggest one Sparky calls Big Brother…He's always at the forefront of the nest and had been peering out most of the time in the past couple of weeks. 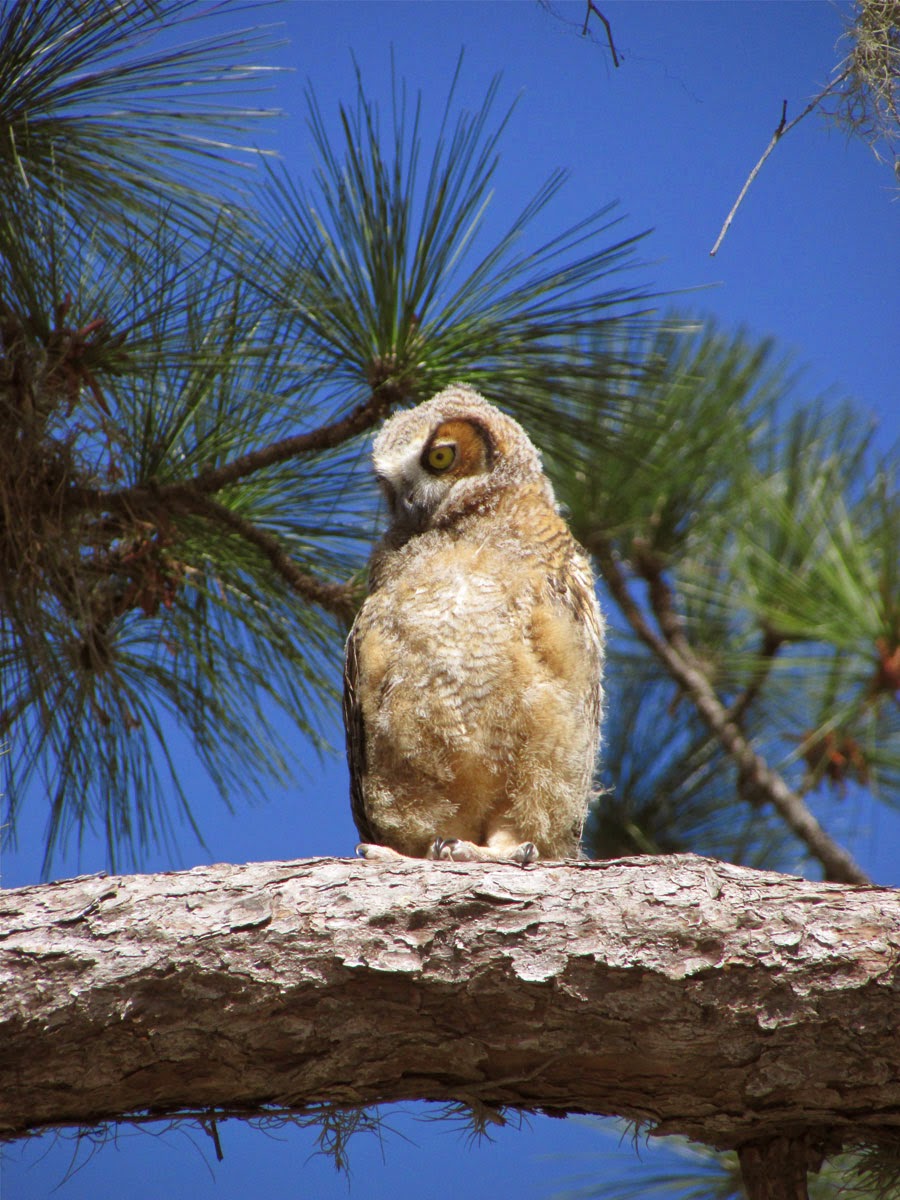 The local newspaper has been announcing that this nest is here, and that people are to be careful about noise, and not using ridiculous things to assist them in photographing the birds, like a forklift (yes, some lady really paid a guy 200.00 to lift her up to eye level to get shots of the owls), and drones, remote control aircraft, etc. Really? Yes, really. Times have changed, haven't they? 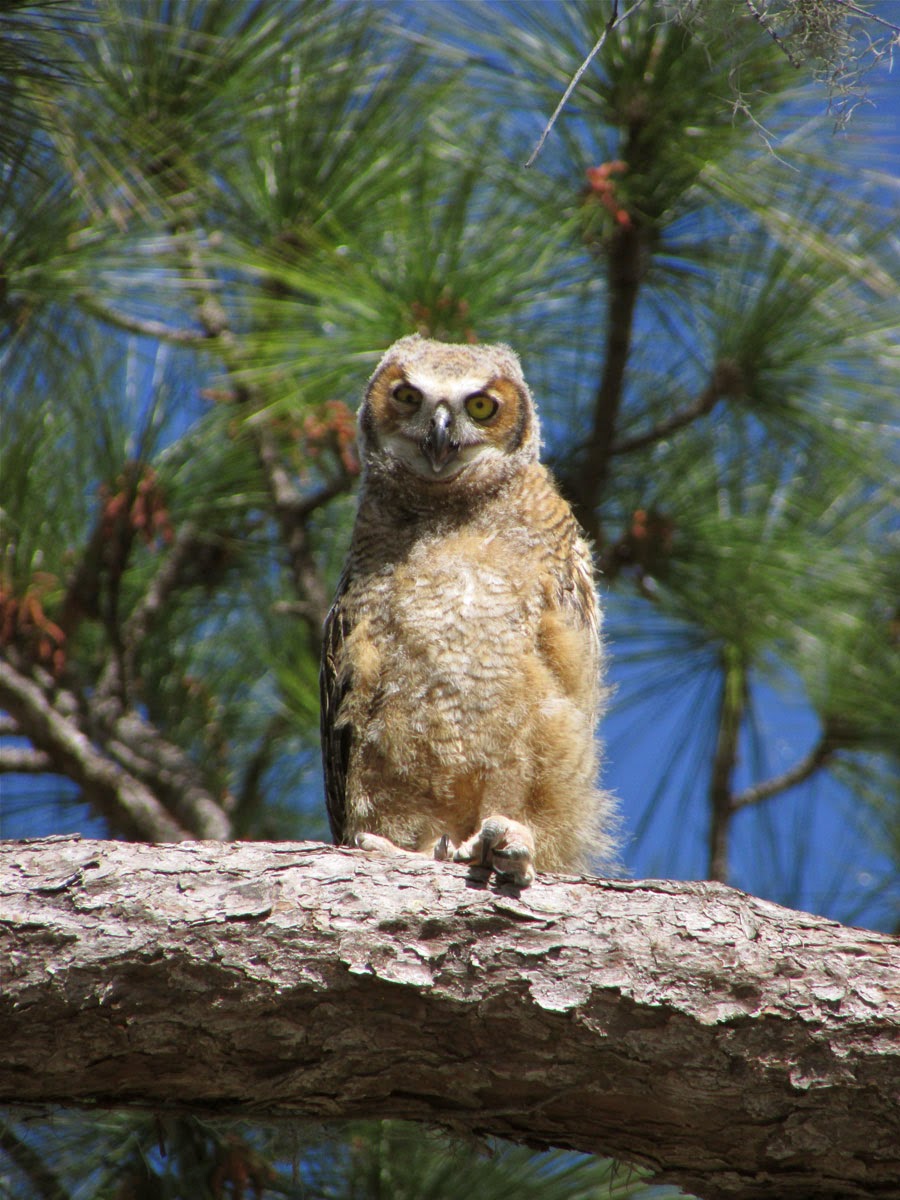 Lots of things have happened to the owls this past week. Last Saturday, one of the smaller of the three owls fell out of the nest. Somebody called wildlife protection services or a ranger, not sure which, and he donned protective gear, put on spikes and climbed the pine tree to put the baby back in the nest! TADA!
Just today, one of the babies flew out of the nest and got caught in the moss/lichens that heavily drape the pines around here. He was hanging part way upside down and in distress. Again, ranger or wildlife protection services to the rescue! He put on full head gear once again, and protective gloves. He got the youngster (owlet?) out of the moss, and at that point, the owlet assumed battle stance, making menacing big wing flutterings, and making all kinds of noises, crying for its mama, who luckily was not around at the moment. The ranger/wildlife guy got him back into the nest, or at least back into the tree, we're not sure of the exact story, but there were people there who saw the events unfold….. 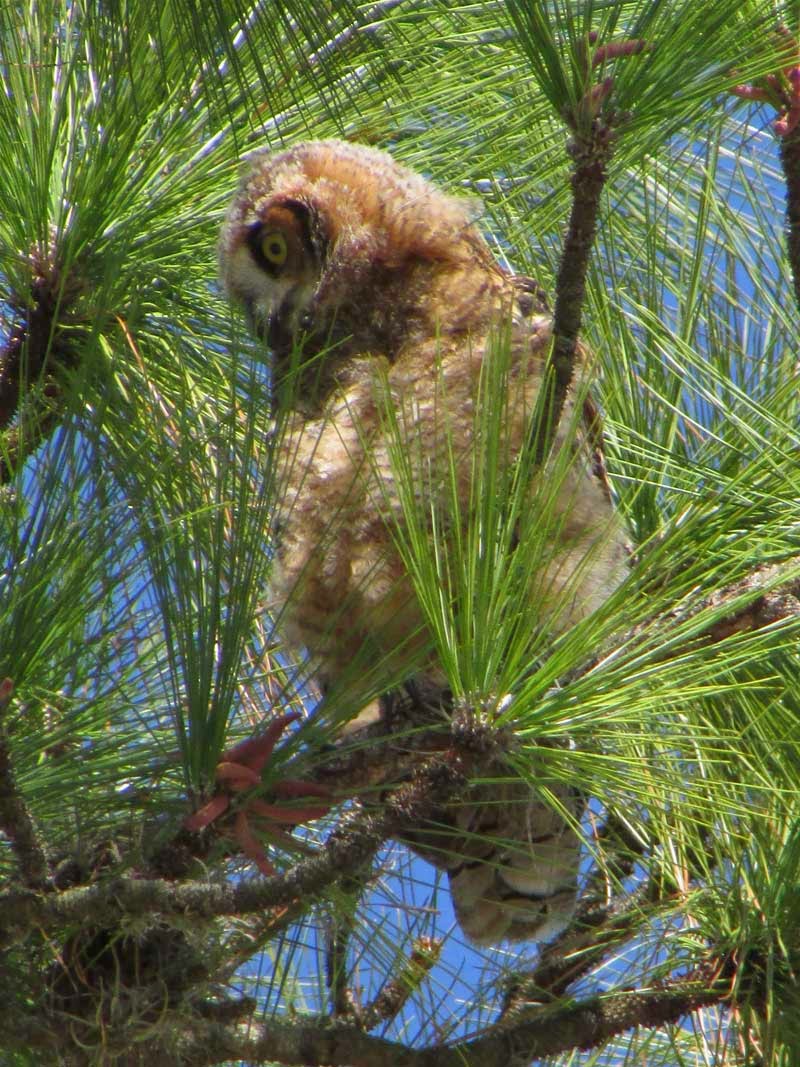 It's been so cool to watch these babies grow and develop these past three weeks or so…We are so lucky to live in an environmentally rich area, with lots of different kinds of birds and things to see. A photographer who was standing there gave us a tip for seeing a barred owl nest with parents feeding the babies in the Amish area of Sarasota, Pinecraft, where the owl's nest is in a neighborhood park. We might go check that out!

Thanks for stopping by…...