Bike riding all around town…Sparky has found some more picturesque places to ride…lots prettier than the Legacy Trail in some cases….Honore Avenue has plenty of wide sidewalks and some street bike paths, but Sparky prefers riding on the sidewalk. She boogies when nobody's around, then slows down for pedestrians. Photos coming later….

The baby owls have fledged and departed, and look at this---the stolen nest which was taken out from under the ospreys has been reclaimed! The osprey is back in it! Wonder if she's going to be having babies soon? But maybe it's a "he"…..

We were out driving around this morning over by University Mall in Sarasota, at Benderson Park, home of a pretty amazing rowing/athletic facility under construction and darned if there wasn't a "Run or Dye Race there in addition to a rowing competition. The rowers were having difficulty paying attention to their coxswain while this race was going on. No wonder! 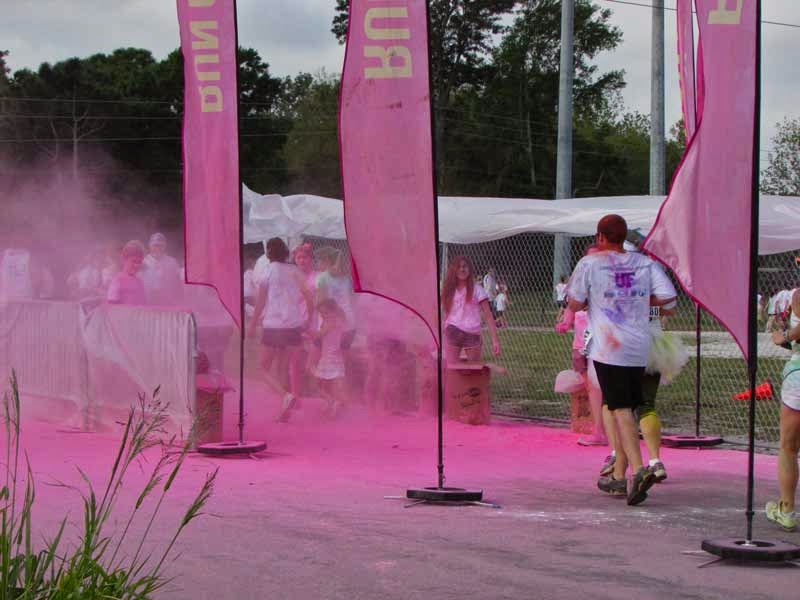 Ever see one of these or participate in one? It looks like a LOT of fun! It's very informal…No time is kept…Dress up in a crazy style….the crazier the better! One of the ladies today got a wedding gown from Goodwill and she and her family/friends dressed in bridal party wear. Tutus were VERY popular! 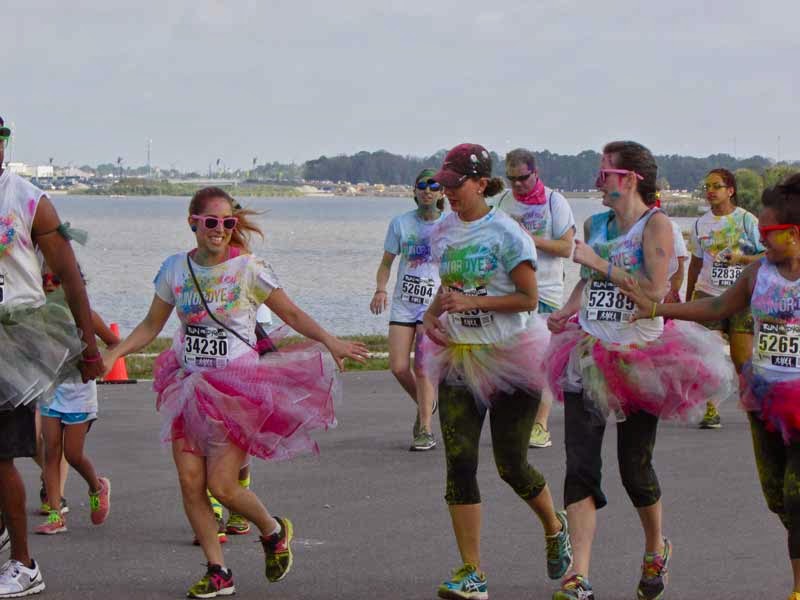 It'a a 5K and you can run or walk…nobody cares, come out and just do it!  The fifty-seven dollar entry fee didn't deter the 4500 participants today. The fee from the race is used partly for local charities and for the huge vats of dyed cornstarch powder that envelop the runners and walkers in CLOUDS of riotous color! There are different colored stations around the track and the volunteers have just as much fun as the runners and walkers trying to REALLY douse the participants in clouds and clouds of color. It was hard to tell if they just threw the colors at the runners or sprayed it at them. 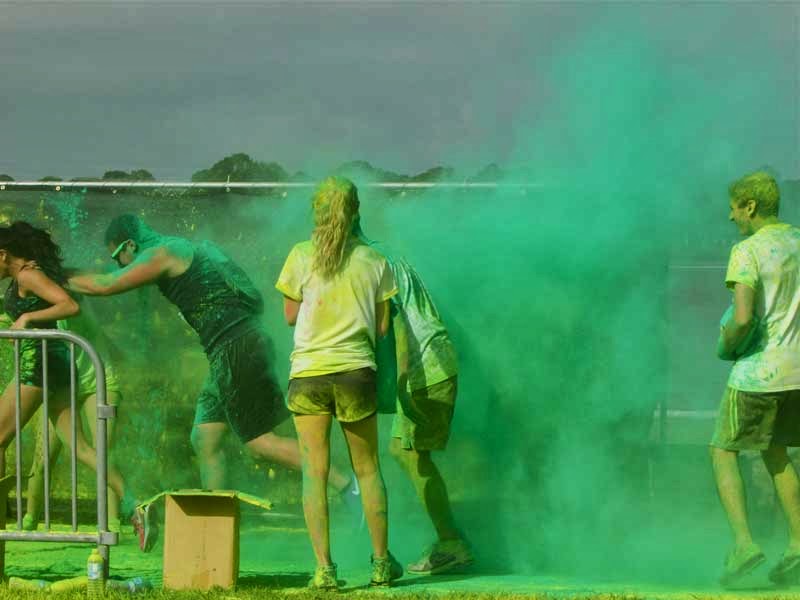 Check out the guy on the far left in this photo above. He started at the other end pushing his girlfriend through the colored vapor, hiding his head behind her shoulders, making her get the brunt of it! Coward! But it looks like he got just as much as she did when he came out the other end!

It looks like this little girl is definitely NOT sure about her mom's and sister's colorful outfits. 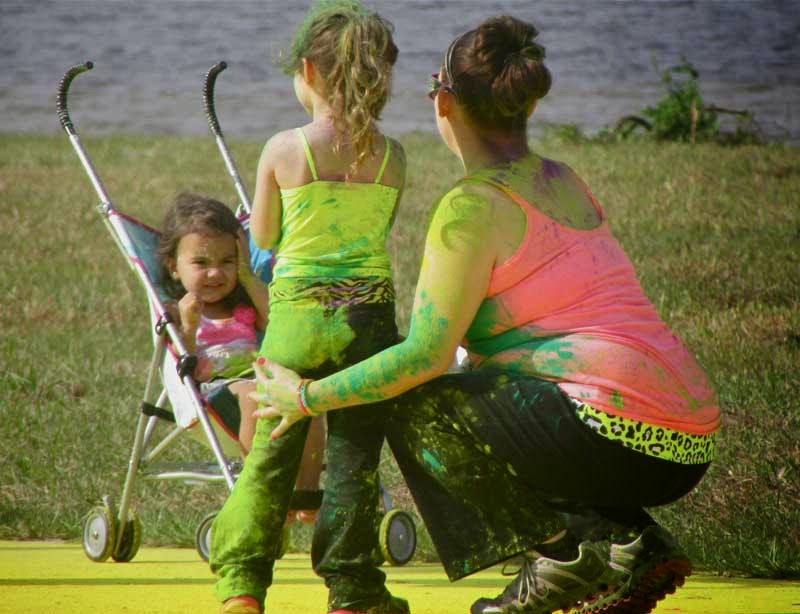 Sparky thinks there is some kind of celebratory explosion of multiple colors at the end, but she's not totally sure about that, we didn't see the finish line….How cool! Everybody appeared to be having a marvelous time. Sunglasses are a big help in keeping the clouds of cornstarch out of your eyes so you can see where you are going! 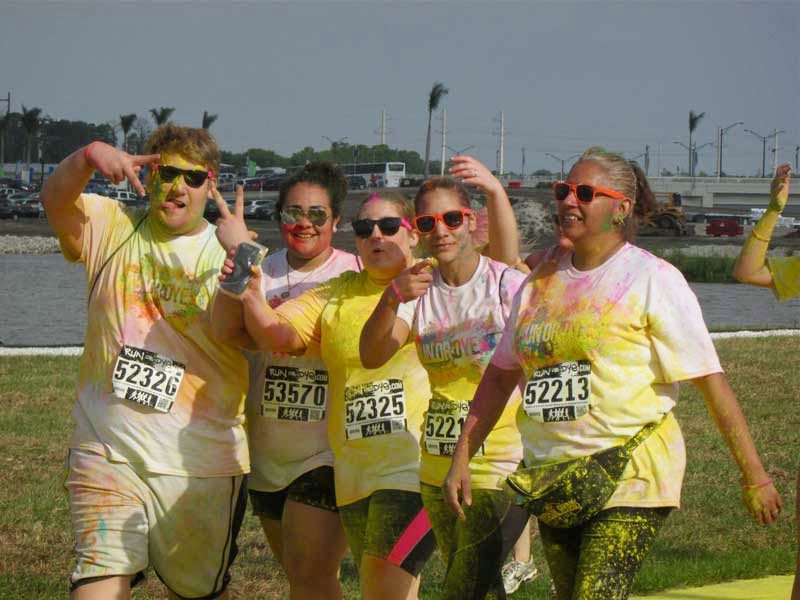 It was looked like lots of fun and that's the whole idea…Come out, get off the couch, have fun and get hit in the face with color from total strangers. Take lots of photos if you can keep the cornstarch from blowing all over your camera. The whole shebang is one big social event. Bet lots of photos got posted on Facebook today! 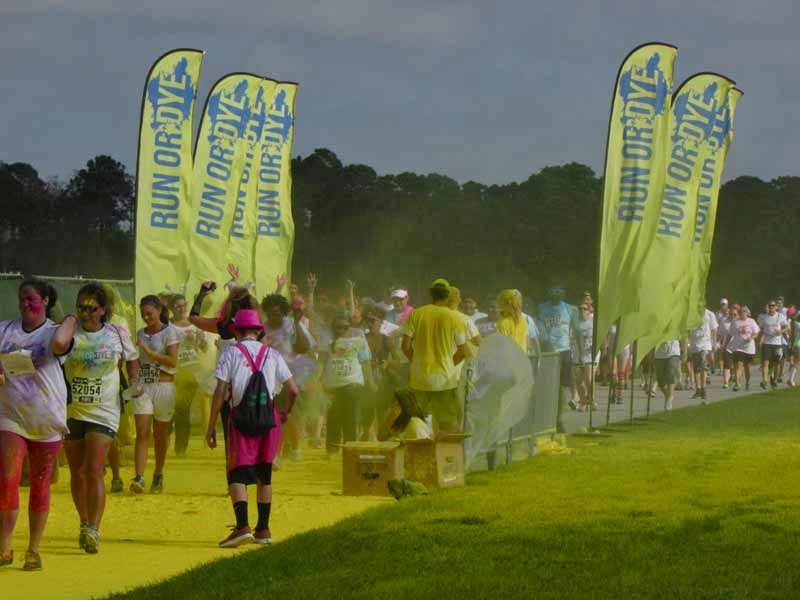 Sparky is going to definitely think about entering the next local Color Run/Run or Dye event if she can walk it…haha……Not going to start running seriously at this stage in her life, although lots of people do…..But she definitely would walk it! (And I'll just take photos, says E.…SOMEBODY is gonna have to document this!)

Posted by Jeannie and Eldy at 9:06 PM