A Mish Mash of Stuff and the Mote

Sparky is going to be all over the map today, not as in traveling the U.S., but as in catching up with all things Sarasota and Manatee….She's been subbing a LOT lately….Heartwarming experiences, funny tales, and frustrating experiences at times, but always rewarding with many hugs received each day she subs….

Kindergarten several times….A little boy studied Sparky intently one day, checking out her glasses and her ears. "Do you wear a hearing aide?" he asked. "No, why, do you think I need one?" Sparky replied.  At which point, the little boy mouthed the words, "Can you hear me?"  And Sparky, ever on the ball said, "Of COURSE I can hear you!" His mouth dropped open, and he said incredulously, "How did you do that?"  And Sparky, not wanting to give away any teacher secrets, just smiled slyly and moved on with her lesson.

Had lunch with an ornery bunch of second graders today….Sparky's class asked if she would eat lunch with them. Knowing this class was a little on the ornery side, Sparky said, sure! But they had to have a good morning….and they did…So Sparky ate lunch with them. A little girl with dreadlocks asked, "Would you be my mom?"  Sparky was a little taken aback. "You have a mom, don't you?"  "Un-hunh," she replied, "but I still want you to be my mom." Sparky had a feeling that maybe her mom wasn't in the picture. Hard to tell what prompted that request….

"How old are you?" is a popular question. "How old do you think I am?" is the usual response. And then the fun begins…"Twenty-five."   Kid, you win the most popular kid of the class contest, hands down, and an A++.  "Aw, she's not twenty-five, she's fifty-five." That kid gets second prize for sure! And one more kid goes, "I think she's seventy." That one gets the booby prize. For the record, Sparky is going to be 64 in July.

A comment heard from a little kindergarten girl…"I'm just really rockin' it today!" That little one has some self-confidence. You go, girl!

When Sparky's sister and brother-in-law were visiting, we headed to the Mote Marine Aquarium and Research Center once again. The Mote never fails to deliver an interesting and informative experience no matter how many times you go. There's always something new going on, or something you missed the last time you went. This time it was the "Extreme Survivors" exhibit in a new wing of the aquarium. Very cool unusual animals who protect themselves from predators and who are VERY dangerous to come in contact with….like the bumblebee dart frog…Poisonous toxins are secreted from their skin and  paralyze respiratory muscles causing death to their predators. 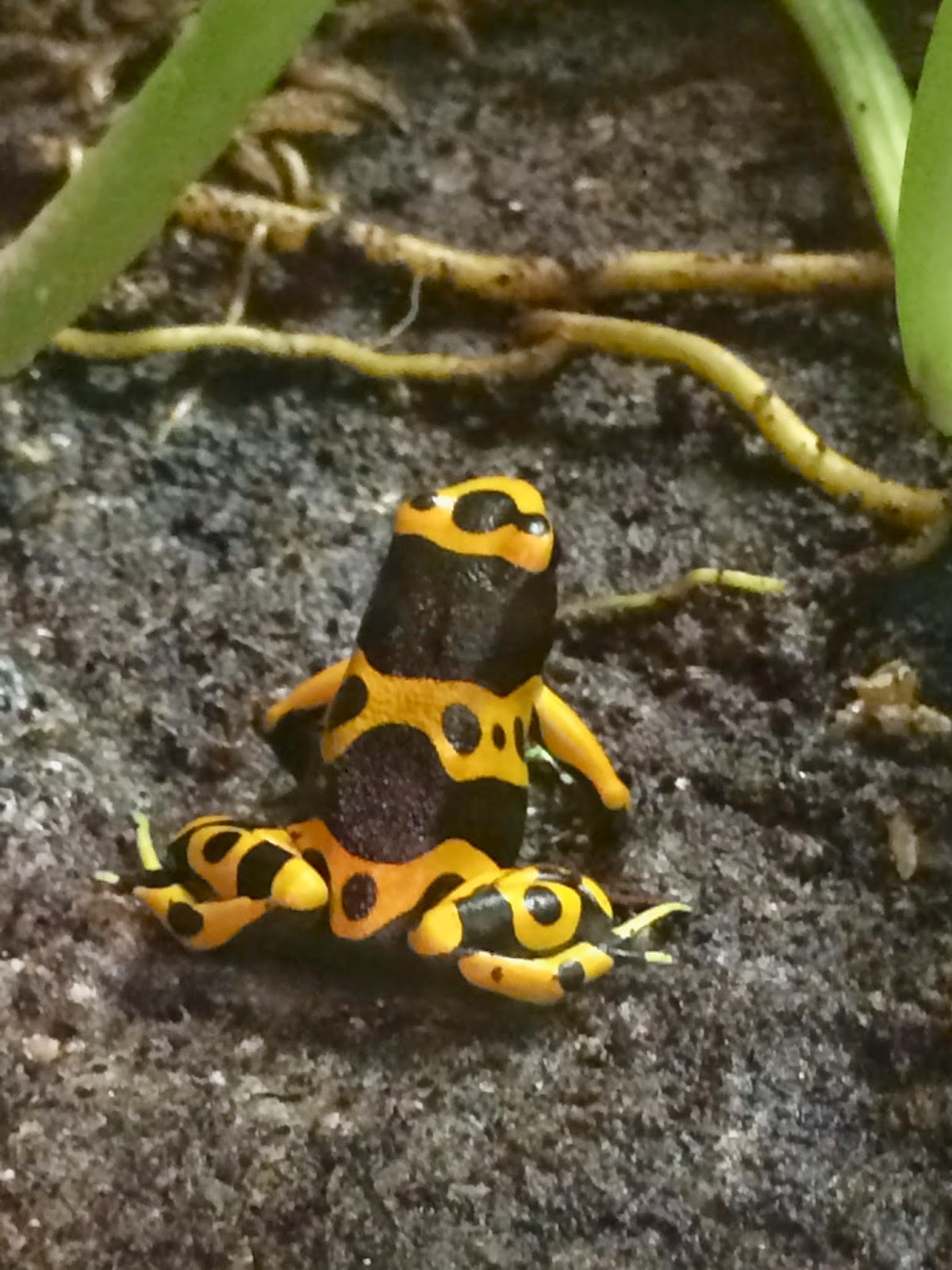 Here is the blue ringed octopus. When it is calm, it's grey. When it gets riled up, it shows rings of blue, then watch out!  It is one of the most venomous animals on the planet. 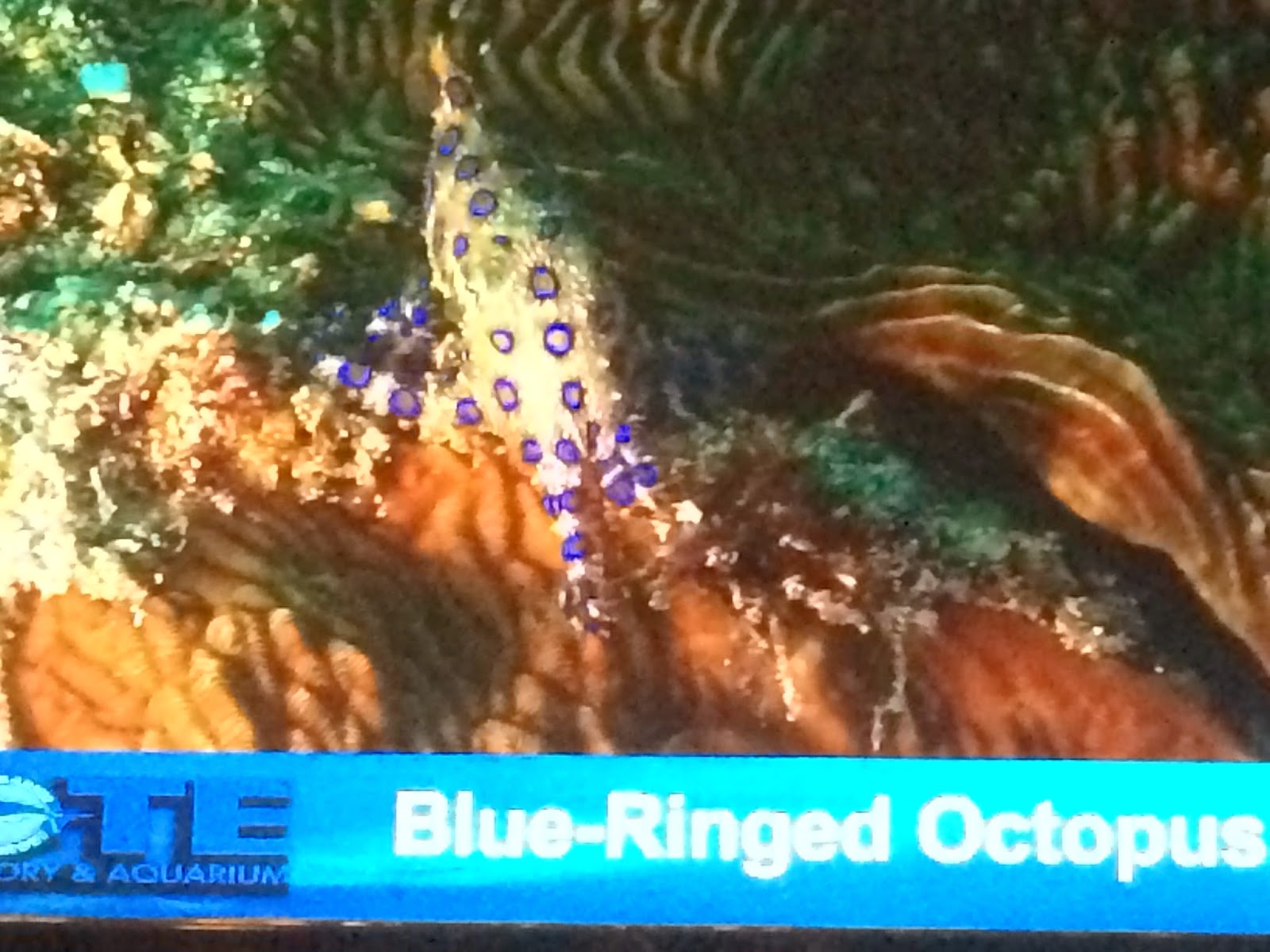 Their bite contains tetrodotoxin venom and just ONE MILLIGRAM can kill a human. They are not aggressive, but people have been bitten and killed through their carelessness.

The peacock mantis shrimp, sometimes known as the "thumb splitter", has some amazing qualities. Its claws can deliver a blow that has 200 pounds of force! Its punch is the fastest on record, at 50 mph. It can shatter glass and splinter crab shells. Their claws are so hard, scientists are studying them because they can deliver 50,000 blows between molts and not get cracked. Scientists are interested in applying this knowledge to the study of body armor. 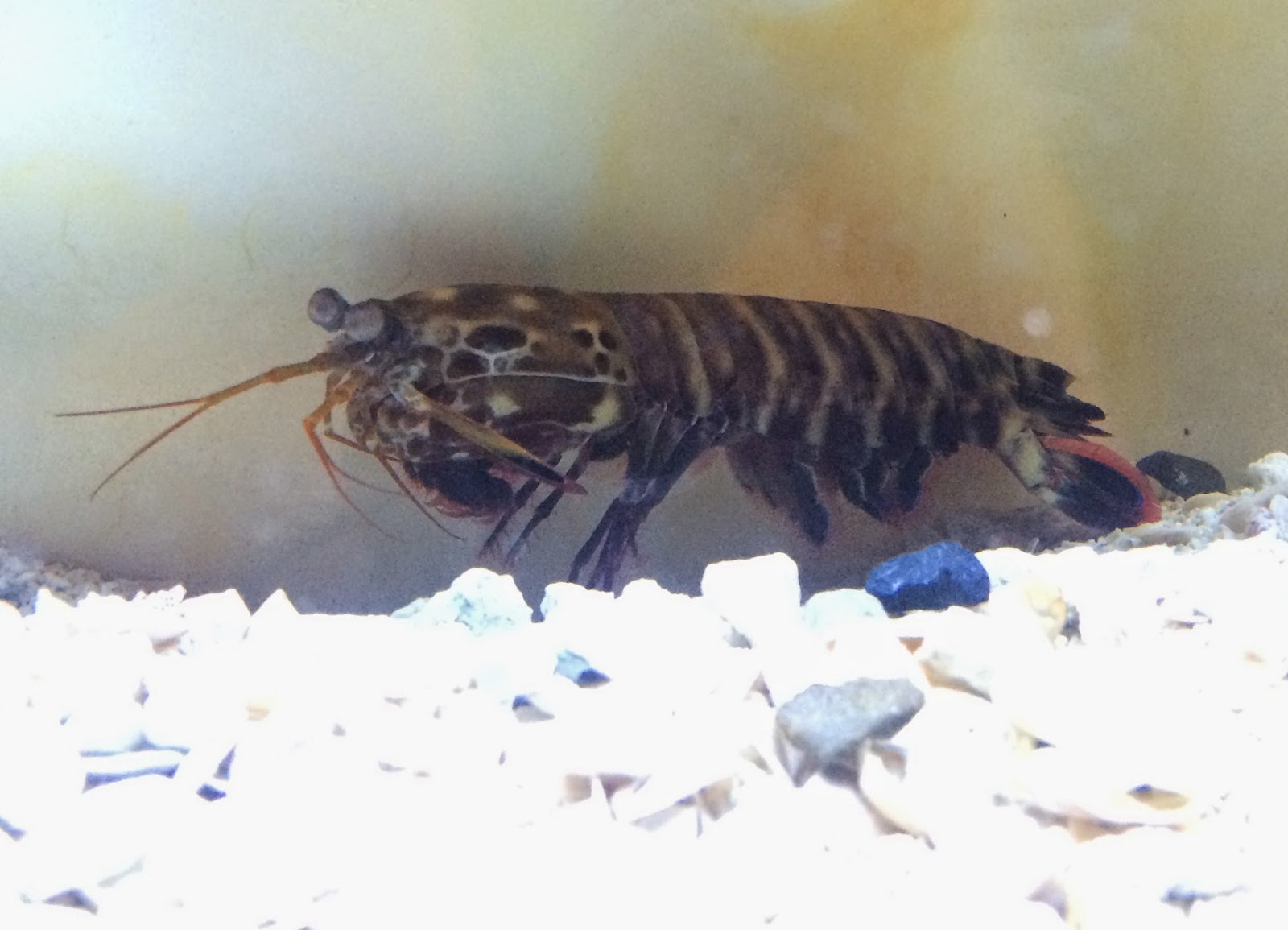 "How about them sea apples?" Sea apples not only secrete a foul tasting toxin, causing problems and killing some species, but they also can expel their internal organs, giving their predators a meal, and allowing them to make a getaway. EWWWWW!  ---But interesting...The internal parts grow back within a few days….They are very beautiful, aren't they? Sparky loves the viewing tank where the turtles are. There's a lower viewing window at kid level so you can watch them up close. Or they can watch you. And they do….. 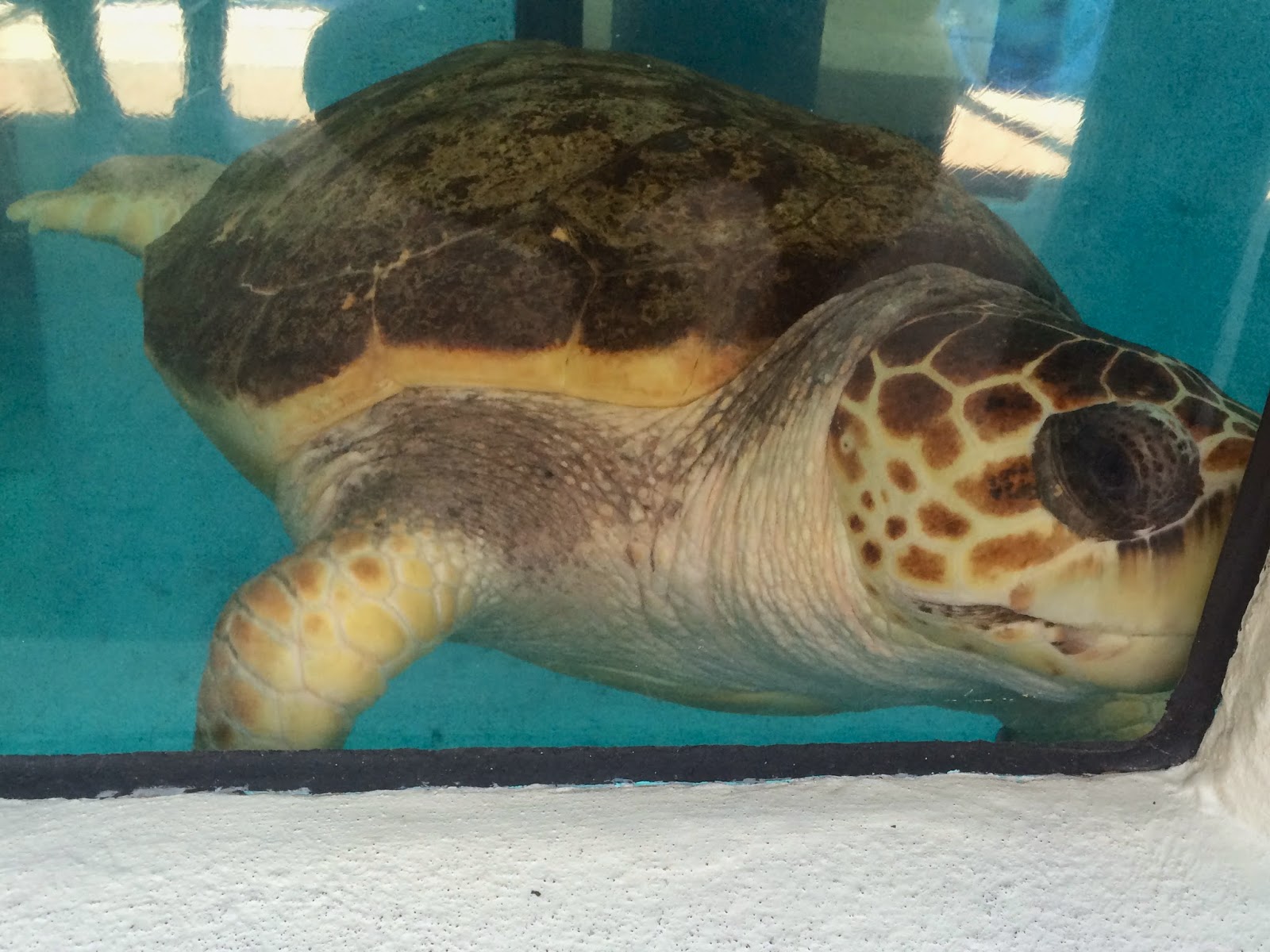 Did you know they now track some sea turtles with satellite tracking devices? Some turtles have a transmitter epoxied to their shells and when they surface to breathe, up pops the little antennae, and a signal transmits to a satellite which bounces back their location to Mote Marine Laboratory. Amazing! 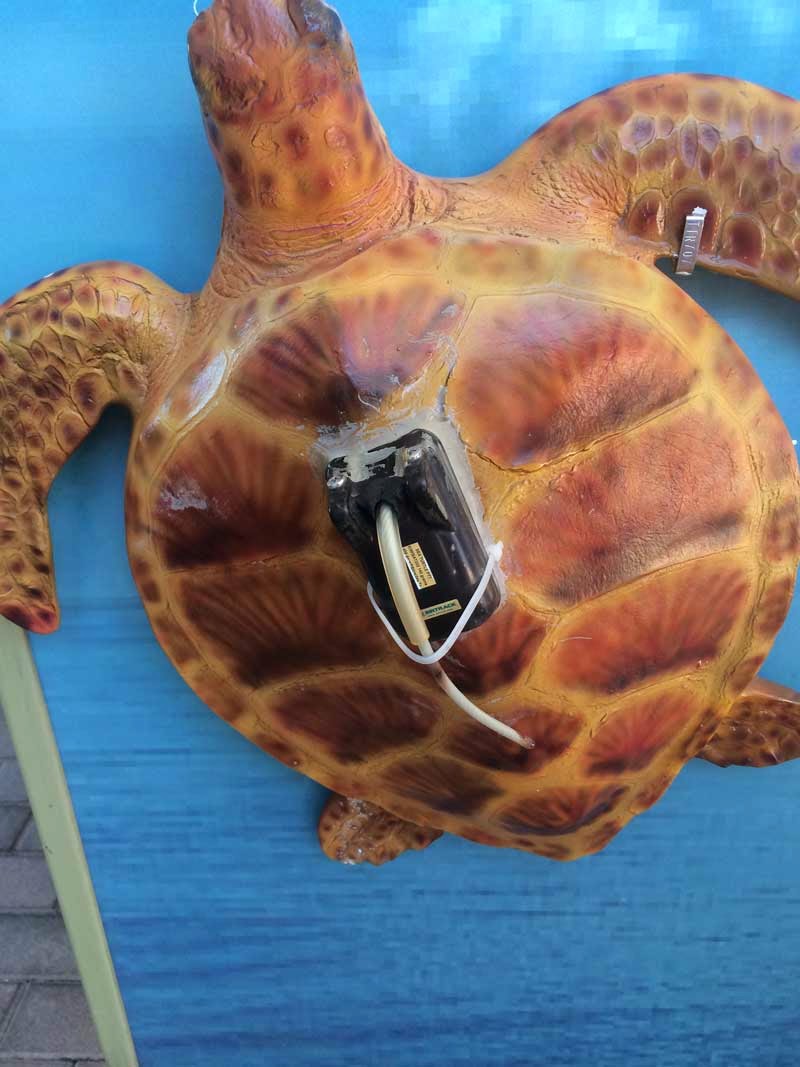 And that's the latest news from the Mote….All good things must come to an end…Sparky's sister is headed to Matlache, another wonderful, quirky little artist colony village/town south of Bradenton…or is it north?….(Eldo is sleeping or he'd set Sparky straight)…Nite every one….Till next time….
Posted by Jeannie and Eldy at 11:00 PM