Sparky is NOT a Fuddy Duddy Grandma!

But then, nobody ever said she was! Sparky just wants to go on record as she is still moving to keep from getting "stove up" as Indiana Hoosiers say, and probably a bunch of other folks around the country use that expression, too? She just wanted some proof that she is still moving at the age of 63 going on 64, so her pickle ball playing friends at Sun 'n' Fun took some photos to prove it. Suzette, thank you…At first Suzette had nothing but butt shots---the angle was all wrong. "NO MORE BUTT SHOTS, PLEASE!" begged Sparky. So here's Sparky, playing her favorite game….. 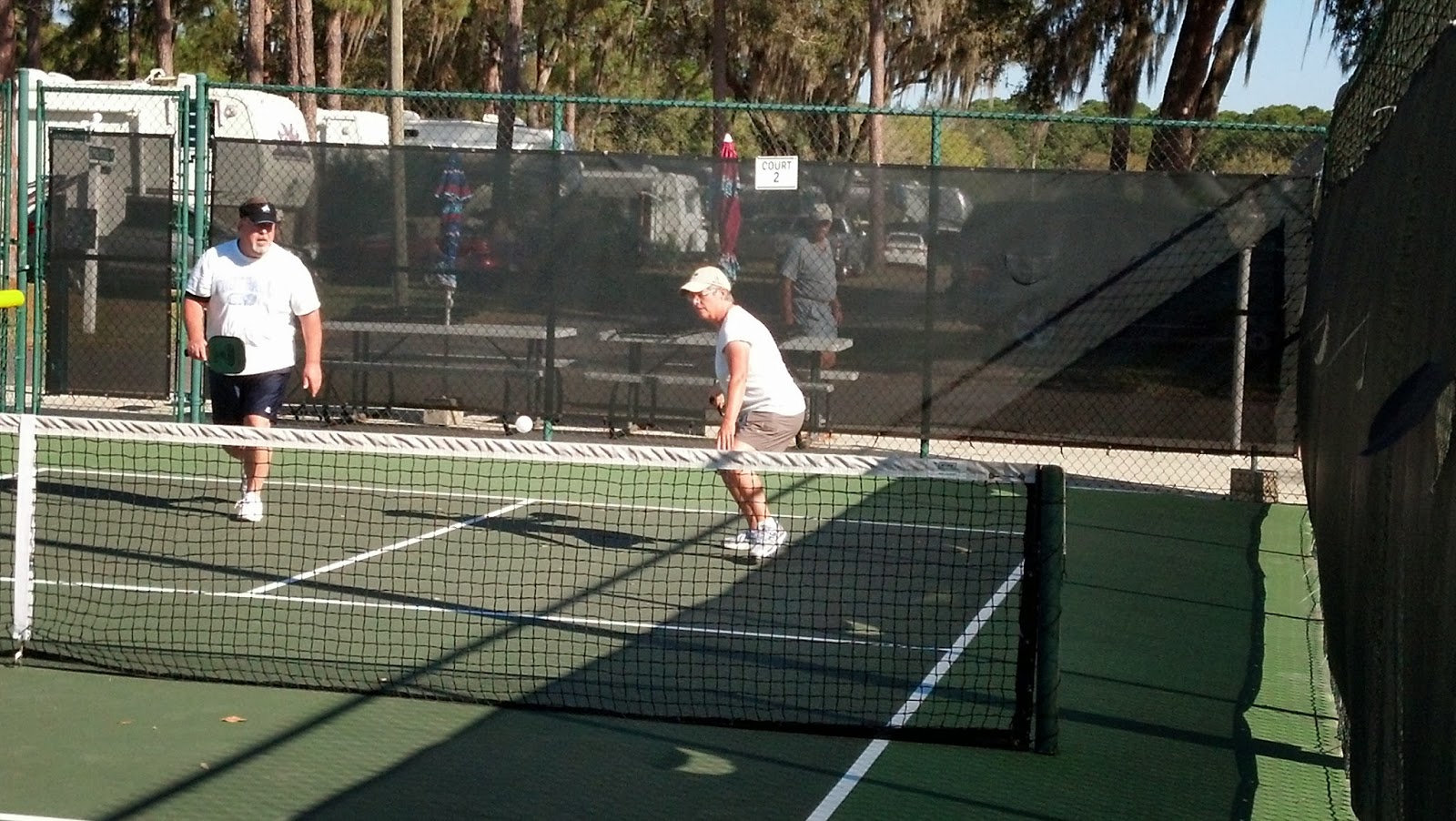 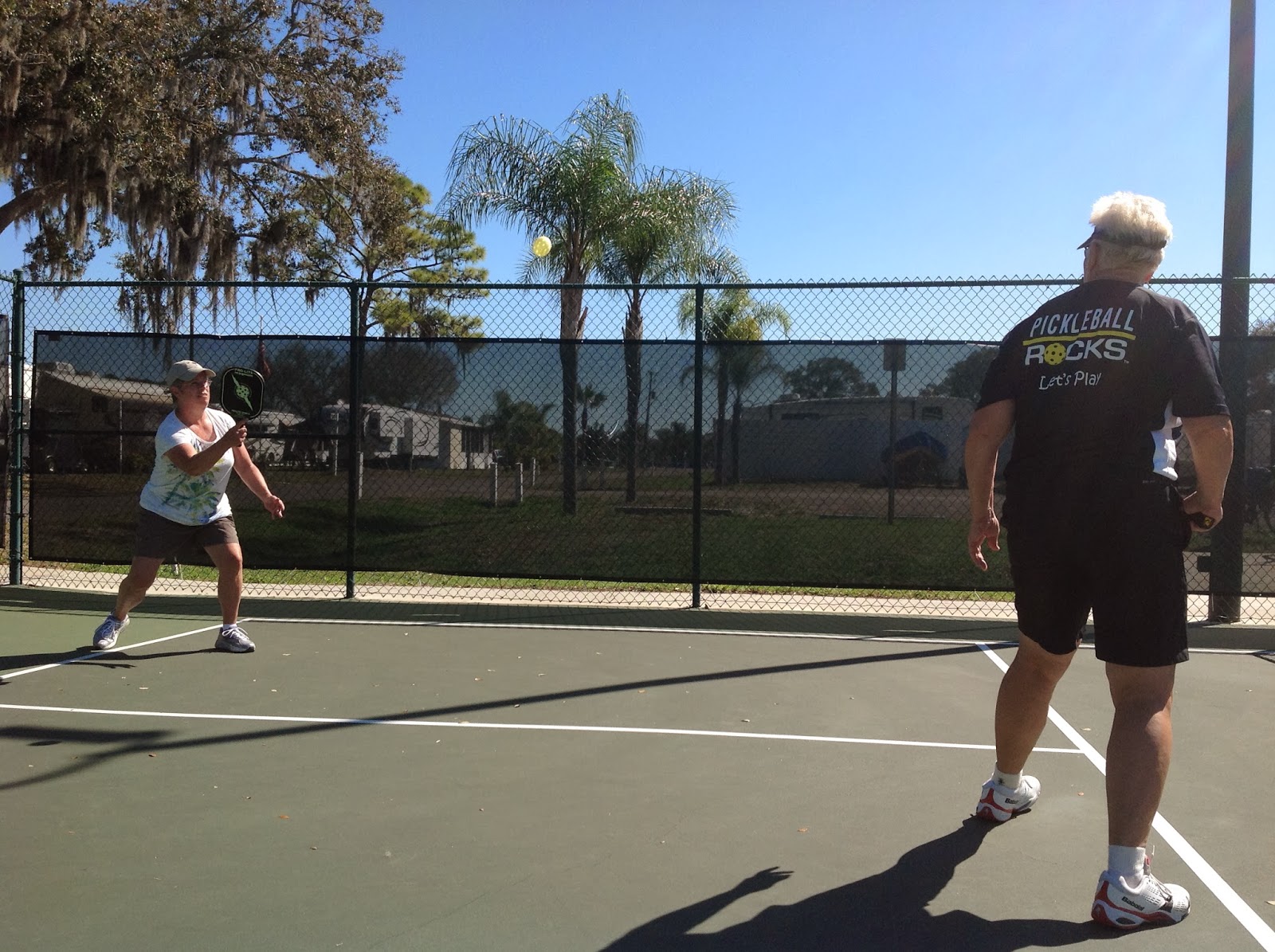 What else is new? We found another cool place to eat on the beach, The Beach House!  They have a terrific fish dip there, one of the best we've ever had. Sparky had the BIGGEST peel and eat shrimp in her life there and Eldo had a grouper dinner which he said was delicious. 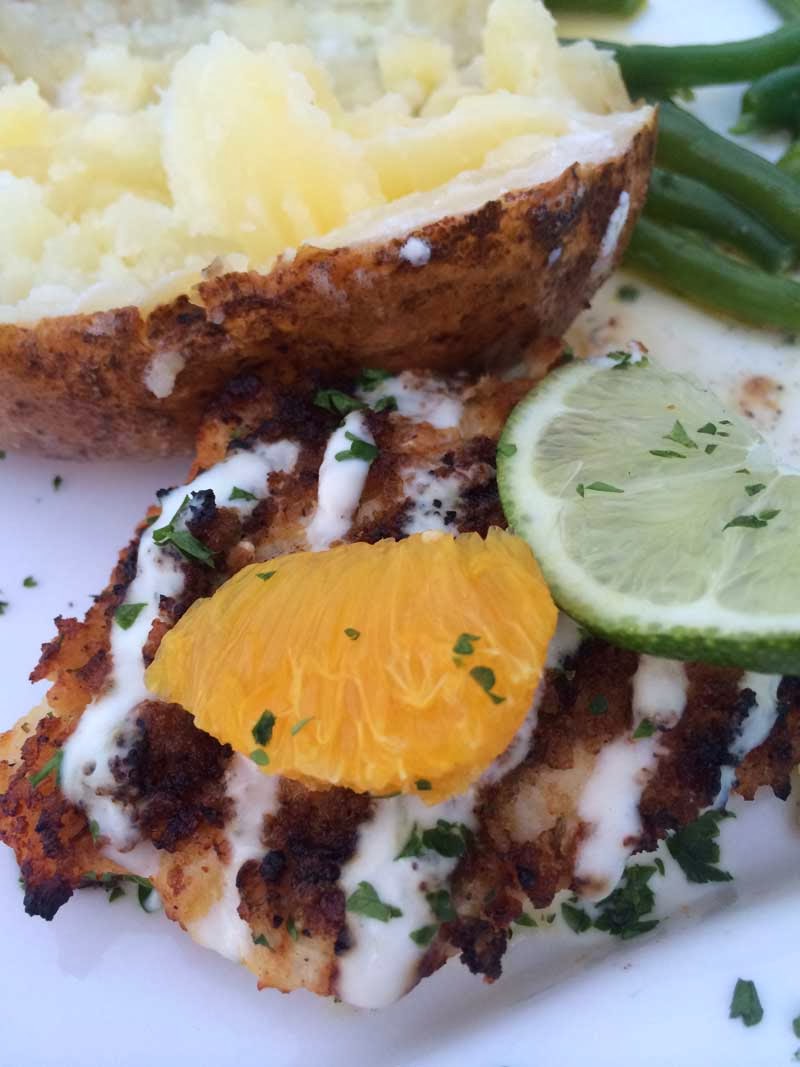 The restaurant has recently been renovated, and it looked really pretty although it isn't quite done yet. They will be finished with renovations by the end of this month somebody said. We plan on going back…. 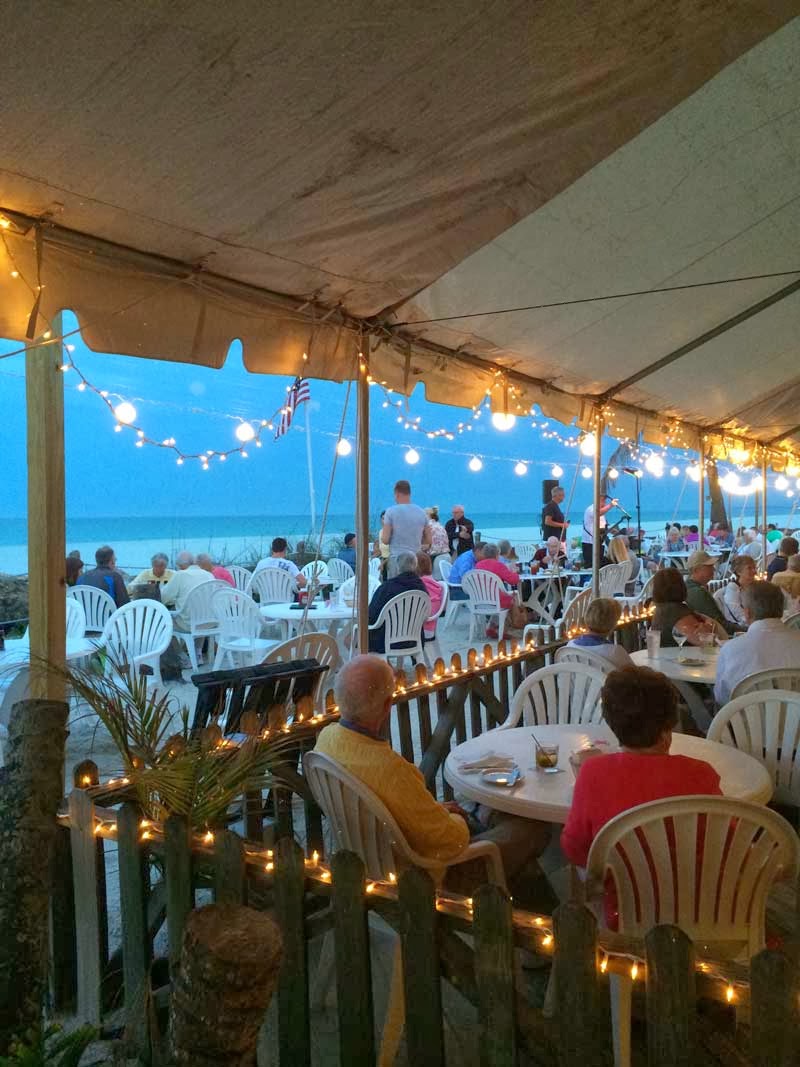 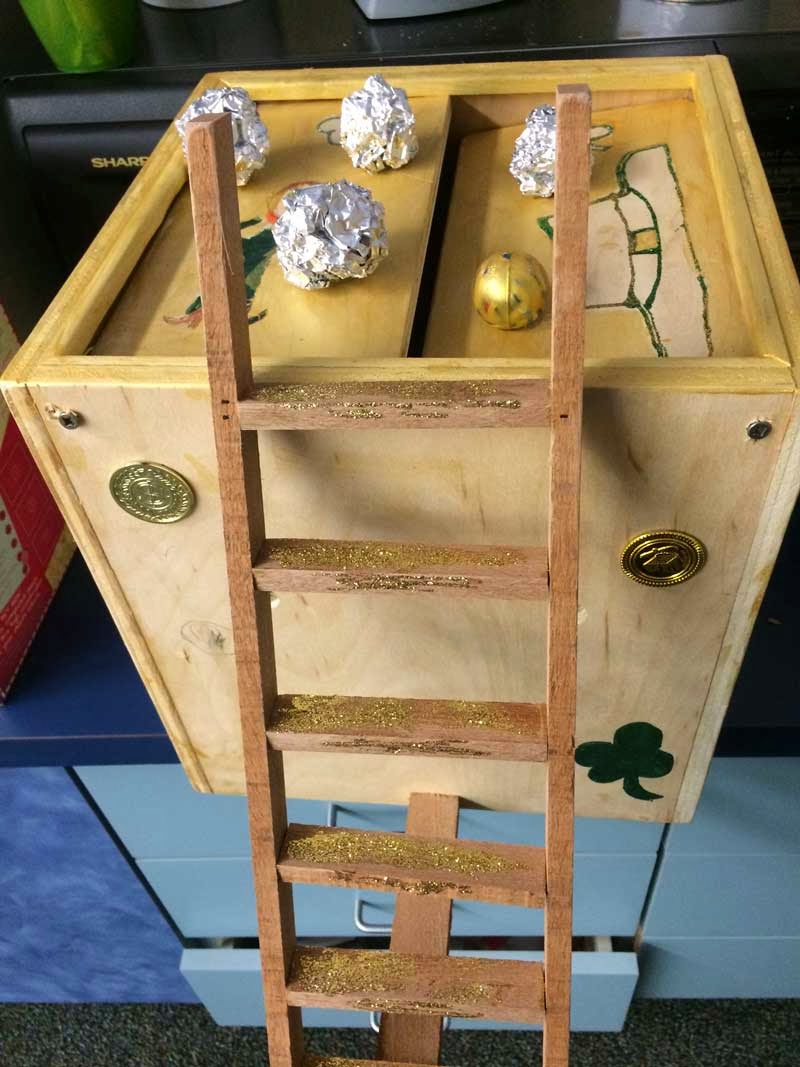 Sparky is subbing regularly at her favorite school. This past week, the kids were priming themselves for St. Patrick's Day. Sparky was in kindergarten again, and the student teacher assisting the absent classroom teacher, was helping the kids try and catch a leprechaun this week. It's almost spring break…They were bonkers on Thursday, with one more day to go. But the teachers are coping by having some fun stuff for the kids to look forward to…The leprechaun was very mischevious! He knocked over some chairs in the room, got into her M & M's, (AHEM! Maybe SPARKY got into the M & M's, says E.) Nope! Sparky doesn't care for regular M & M's. Now, PEANUT M & M's, that's another story! At any rate, a trail of green and gold glitter showed the leprechaun making an exit out the back door so the kids just missed him. They were SO EXCITED that he'd been there. The culmination on Friday, was the kids were going to put their traps they had made during the past two weeks out to see if they could catch themselves a leprechaun. Here are a couple of whiz bang traps they made…..Awesome! Even if they did have a little help from mom or dad. 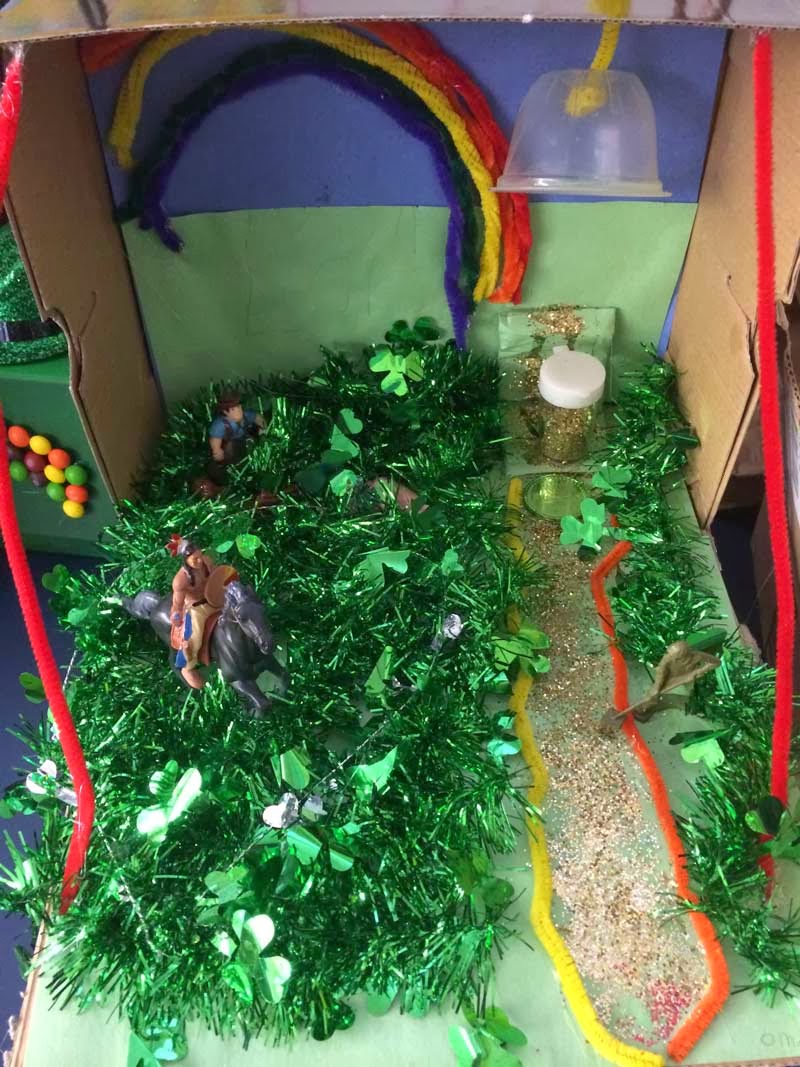 Sparky almost blew it after reading a story about leprechauns and discussing whether is was fiction or non-fiction (yep, learning this in kindergarten), when helping the kids come to the conclusion that the story was made up or fiction, had a little boy ask with a VERY solemn face, "Mrs. Sparkles, are leprechauns real?"  Mrs. Sparkles, a.k.a. Mrs. Sparks said, "Hm-m-m-m-m…what do you think?" And then quickly changed the subject…… 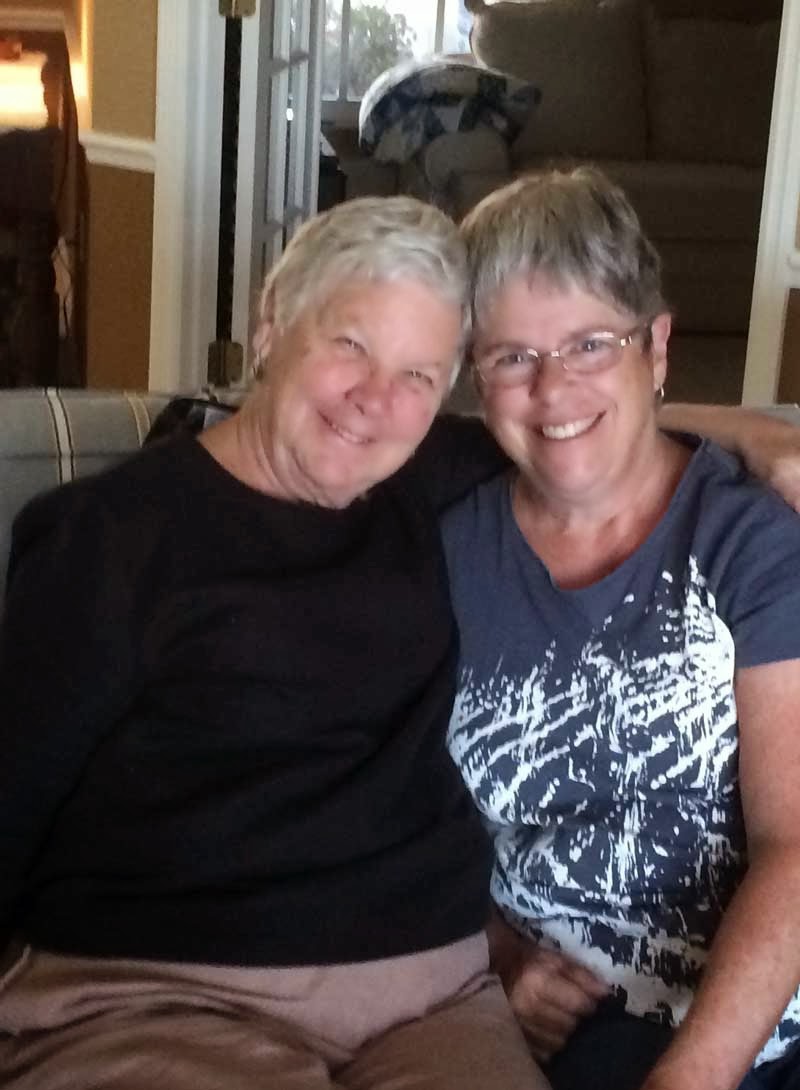 Sparky had a visit from her sister, who's had it with winter in Michigan. She and her husband, came just for a day and night visit. Too quick, but we'll return the visit to them soon in Matlache, a quirky little town further south from us, near Pine Island…Wonderful little shops there, great kayaking, and my sister has already seen 1) two dolphins jump totally out of the water while she was standing on the dock, and 2) a sting ray fling itself out of the water, a BIG one! Hope we get to see something!