It Was a GRAND Thanksgiving

Eldy's son Brian and his family came for a few days at Thanksgiving…He has two children, Trevor and Cate. They had their first plane ride to come and see us, and they were so excited! It was a good thing the winds which had been quite strong until right before they came, settled down..Otherwise it might have been the last time they wanted to get on a plane to come see us!

Trevor's first thought was to hit our little pool…never mind the water temp was under 80 degrees, he jumped right in and had fun.

A big Thanksgiving dinner cooked by Sparky went off without a hitch…which was pretty amazing since Sparky hasn't cooked a big family dinner in YEARS..Of course, she had a little help from Sister Schubert--her yeast dinner rolls (the frozen kind but which are delicious!) and a ready made pumpkin pie. (Sparky only bakes cookies now and then…) We did the turkey in a simple electric turkey roaster which made it really moist and delicious.

A trip to Busch Gardens…Sparky's first….Guess it used to be quite the alternative animal kingdom to Disney's comparable park, but now it's much more amusement rides than animals…It seemed a little dated, but still you could see efforts to keep it fresh and interesting….Sparky LOVED the flamingoes! 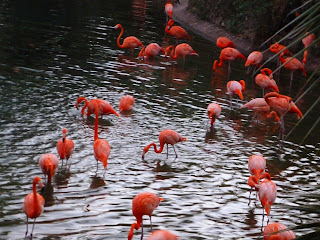 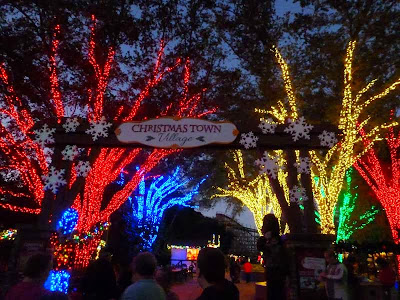 The kids LOVED the rides…Busch Gardens had a special going. If you come during the week, it's 50.00 a person instead of 90.00, AND they had a "Christmas Town" special--It's November 29th -December 23rd, a separate ticketed event…come at 6:00 PM when the park closes, pay the same 50.00 price as the day time special, and take advantage of the park rides with little to no wait, from 6:00 PM to 11:00 PM. The park was decorated with LOTS of colorful, lit up Christmas trees and lights. Coca Cola had a snow park for the kids, complete with an area to roll around in the snow and indoor tubing run…What fun for kids who have never seen snow! 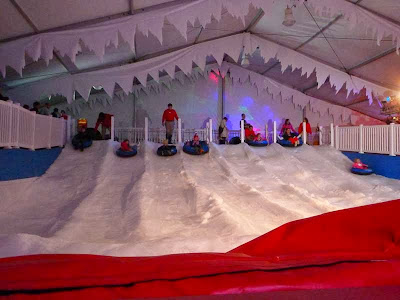 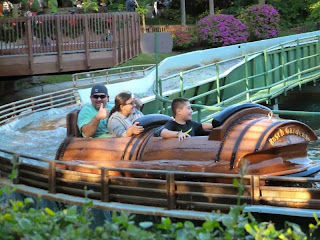 The kids rode and rode the roller coasters and rides, but Sparky and Eldo declined…Sparky NEVER rides roller coasters, and Eldo not as much as he used to, after getting jerked around and feeling discombobulated with some ear problems and vertigo after the last roller coaster ride awhile back. Brian and Lori bought our tickets to the park for us as a Christmas present, so that was very sweet. This was a GREAT time to go to the park. We had seen hour waits earlier in the day, but once the bulk of the crowd went home, there was NO WAITING in lines to get on the rides. Five minutes or less…YAHOO! said Trevor and Cate. "Let's go on the coaster again, Dad!" 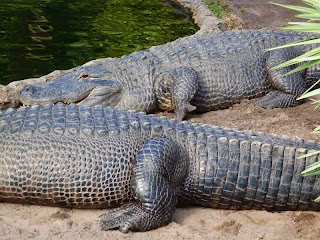 Of course, there are gators at Busch Gardens…Great big FAT ones, the biggest ones we have ever seen. And they had been fed regularly during the summer months while they were active. The gator guy said that they weren't going to feed them again until March or April as they didn't need to be fed. He's not worried about the gators, is he? (There was a second guy armed with a big stick waiting and watching, just to be sure.) We got to see an unusual tussling biting match for a few seconds between two big ones where one seemed perturbed that the other one was in his space. That was cool and caught the attention of the gator guy. He said that was VERY unusual to see from these zoo gators. 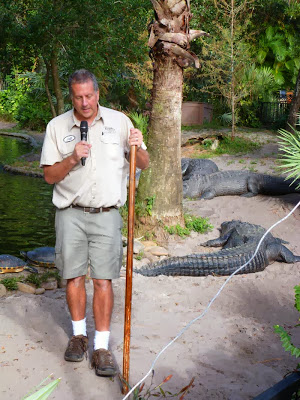 Sparky loved the pavilion Christmas house display that was wired for an electronic light show, sort of like the Gangnam style light show that has shown up on Facebook this last year or two. Incredible Christmas light show timed to a classic Christmas carol music medley….She watched that while the kids rode the coasters. 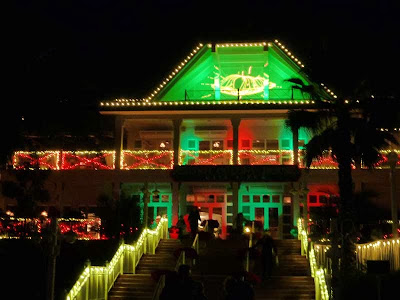 Hmmmm…what else did we like about Busch Gardens? These two boys with rain slickers on who sat under the roller coaster ride that sprayed a HUGE rooster tail water SWOOSH as it came through the last turn. Anybody standing under the coaster ride got wet, a nice touch on a very hot day. But it was VERY cool today, as the evening came on, so we stood clear. But not these two guys! They had a ball! We kept hearing, "This is AWESOME, man!" every time they thoroughly got soaked. The little redhead would crouch down in that "duck and cover" school position we always had the kids assume when it was tornado drill practice, and he waited for the big SPLASH of water to come crashing down on him. The other kid just stood there and soaked it up each time. 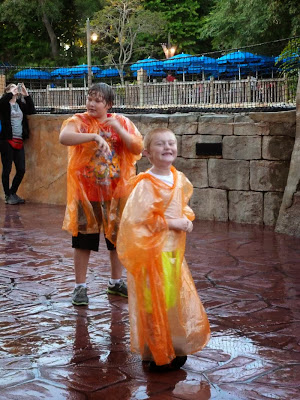 This angel statue was beautiful. As we were walking by, a lady went up to have her photo taken right next to the angel. All of a sudden, the angel came alive! She put her arms gently around the lady, and everyone gasped. She had been so still and was so perfectly painted white you could not tell she was alive. Then as the lady decided she was ready to move on, she started to duck from out under the angel's arms. The angel gently moved and enfolded her arms to hold her close so she couldn't get away. By this time, a crowd had gathered and we all laughed. As she finally let go, the angel arranged herself once again into a motionless upright statue.  Very cool!

We had a wonderful time today at Busch Gardens, Tampa…..One more day with the family, and they have to leave to head back home to Indiana, the home of cold and snow….Sparky is starting to feel just the tiniest feeling to be glad where it's warm and not icy. (WHA-A-A-T???? Did I just hear correctly? What did she just say? asks an astonished Eldo.)  :-)    What's he talking about? I didn't say anything. I still LOVE cold and snow…..Just not ice and sleet….shhhhhhhhh…….hehehheh…..