What have Sparky and Eldo been up to lately?

A boat parade in Sarasota….Always hard to get a good photo at night, but there were a lot of wonderful light displays on a wide variety of boats from little ones to big yachts. It's been an annual tradition for the past 28 years…. 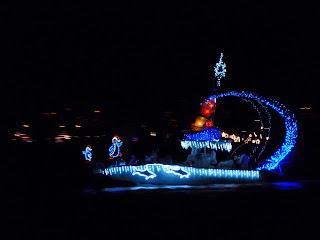 Sparky has been subbing in the schools a couple days a week…The most fun last week was first grade, with a heated discussion that popped up as we were writing letters to Santa. One little guy started a tempest with the comment, "Santa Claus isn't real." WHOA, little buddy! Not so fast! Sparky didn't even get a chance to deliver her "defense of Santa" speech before the rest of the class pounced, hollering, "Yes, he is!" All Ms. Sparks, a.k.a. "Miss Sparkles" (as some little ones call her) could do was quickly change the subject and try to get the class moving in a different direction. She did…. Whew!

The farmer's market in Sarasota on Saturday mornings…..There's always a LOT of entertainment going on…You never know what you might see at the market. This week we saw a guy playing the Australian instrument, the didgeridoo….The sound this instrument makes is VERY cool! 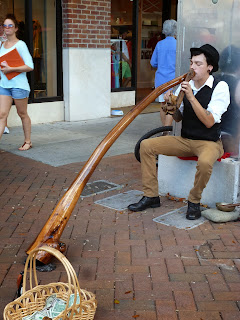 Sparky always likes to see the big Java coffee truck station. Even though she doesn't drink Java (Coke is her morning beverage), she really likes the smell of coffee!

There is so much organic produce and amazing products and stuff to eat for serious foodies (like Sparky), that we never get tired of going to the market. Crepes, Italian bakery delights, teas and coffees, plants, hormone and antibiotic free meats, crafts, and lots of other stuff are there for everyone's enjoyment. Eldy has bought a Vitamix for us and we are starting to make veggie/fruit smoothies, something new for us and a little more of a healthy breakfast than what we normally eat. So we'll be visiting the Saturday morning market more often now….

We visited a Total Wine store for the first time…Interesting place! The colors and shapes of the bottles captivated Sparky along with the names. 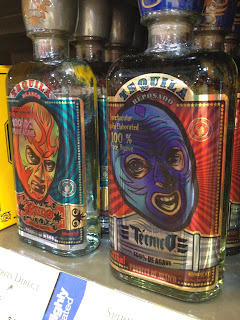 We met up with Vick and Pam Matthews, of Travelin' in the Big EZ….They are in Cortez for the winter, so we hope to see them several times! Always great fun, and we met them at one of our favorite  music venues, Ocean Blues, to see a great powerhouse female vocalist, whose name Sparky has temporarily forgotten at the moment. 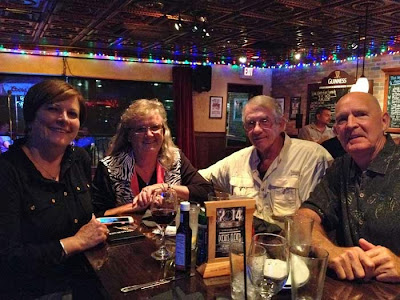 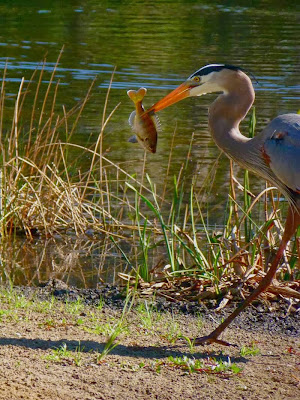 Sparky's been riding her bike at least a couple times a week averaging about ten miles each time in the neighborhood which might as well be considered a bird sanctuary with the number of birds that fish in each residential pond and marsh. There are a lot of buffering wetlands between the housing developments so that really ensures good bird watching just about every time. Sparky got off her bike on the latest ride to watch a snowy egret, an ibis, and a great blue heron fish. She sat down and snapped a few. Nothing too special happening, so she decided to get back on her bike. All of a sudden, the blue heron snapped up a fish, spread its wings and headed towards Sparky! WHOA! Sparky grabbed the camera and managed to get a couple of shots in as the heron landed practically at her feet with the feet and proceeded to gulp it down! Awesome! Patience paid off! And luck, as the action happened so fast, Sparky wasn't sure she even captured anything on camera. It was truly just a "point and shoot" moment and she got lucky! 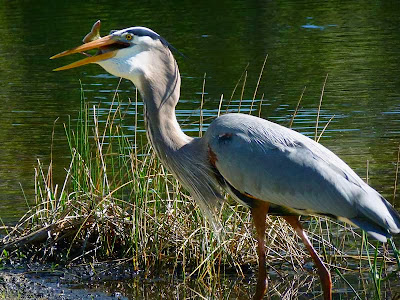 And that's it for now…See you later…Eldo has a big surprise for Sparky for Christmas this year…The next time you read us, you'll hear all about it!