Siesta Key Beach is one of the most beautiful beaches in Sarasota. It was voted the #1 beach in 2011 here in Florida….It's wide, expansive, clean beautiful white sand, and soft on the feet. Lots of cool stuff happens at Siesta Key Beach…the drum circles on Sundays, the sand castle building festivals…the national sand volleyball tournaments…and sometimes just some quirky art stuff… 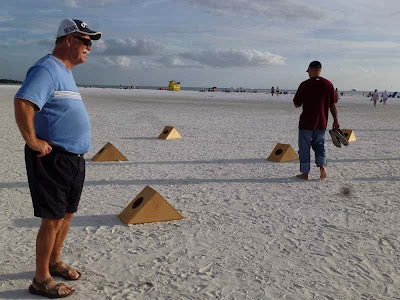 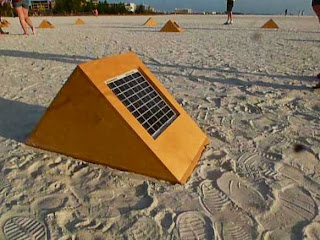 Sparky read about something called the "Sun Boxes" recently….So she dragged Eldo to the beach to check it out. An artist by the name of Craig Colorusso, designed some solar boxes to play music…He set up 20 speakers operating independently, each powered by the sun. The boxes sound a guitar note continuously in a loop. Together they make a Bb cord. The loops are different lengths, so once the piece begins, they keep overlapping and the music changes over a period of time. The music sounds like a spa record, or something you would hear during a yoga session. It's VERY relaxing and soothing….These sun boxes have been set up in different locations, moving around Sarasota this week and one of the last places they were set up today was Siesta Key Beach.
They were so cool! The music was beautiful…Many people were stopping by and walking in and around the boxes, which changed the loop length as they interrupted  the power to the solar panels by their shadows. 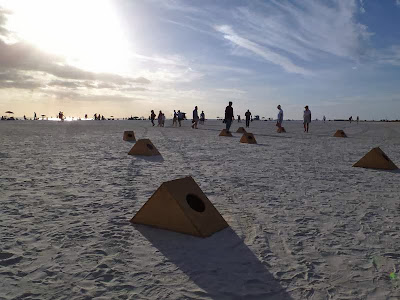 That made the dynamics of the music be ever changing in the nature of the sounds. And as the sun peeked in and out of the clouds, that variable made the music change. It was great…..This little guy came up to explore one of the boxes, and when he saw Sparky with her camera, he just flashed the cutest little grin and posed for a photo by the box. Adorable! 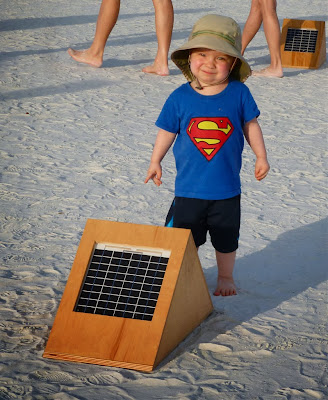 Stay tuned for some marvelous festivals coming up. The season is heating up! The temperatures are cooling down….The snowbirds are on their way….A Renaissance festival, a blues and brews festival, and Sparky's daughter Kelly, is coming for a visit!  See you later!