We are "mooch docking" at Eldy's son's house for three days....getting a little breather before heading for a busy final end to summer up in Michigan, where we will be moving around every 3-4 days at private campgrounds, exploring some old haunts. We are going to Sault St. Marie, Grand Marais, and Munising, home of 17 waterfalls. You know what Sparky will be doing!

So, in the meantime, Sparky decided a little lawn work was in order, to help Brian and Lori catch up with the lawn mowing. They are super busy professionals, and they just don't have the time with their multiple jobs to keep up with some things, so Sparky offered to mow their lawn. We-l-l-l-l....They use a zero turn lawn mower. Sparky had never used one of those, but Brian was willing to teach her, he's a really patient guy. So, with a few instructions, Brian asked if Sparky if she understood how the controls worked. Of course she did! It looked super easy. He says, well, OK, we will just watch you take a turn around first before we head out for Trevor's tennis match. (That's Eldy's grandson.)

And off she went! Wish we had a video or photos. We have neither. Picture this in your mind, it will be a good exercise in visualization if Sparky tells it right. Sparky quickly forgot how to slow down, which is pull the dual handles BACK towards you. The natural instinct is to push forward like you are pushing a regular lawn mower, (DON'T DO THAT!) and Sparky shot forward like a rabbit. She was pushing and pulling handles to make the lawn mower turn as lawn objects were looming dangerously in her way. CRUNCH! She gave the portable basketball hoop a good thump before she reversed herself and shot backwards. Then she crazily wove back and forth across the grass, throttle open, FULL SPEED AHEAD! Eldy is having a coronary right there on the spot, especially after Sparky hit the basketball hoop. He thought she was going to knock it over onto the RV which is parked right next to the lawn. On the first round, Sparky's phone fell out of her pocket onto the grass so as she came around the second time, she's hollering about her phone, afraid she is going to run it over, Eldy and Brian are hollering, "SLOW DOWN, SLOW DOWN!!!!" and making wild gesturing motions with their hands, Sparky is going, "WTH????" realizing later that they were showing her how to pull back the handles to slow down, but Sparky is laughing manically like a crazy mad woman because she is secretly terrified at how fast she is going and how out of control she was with the lawn mower. 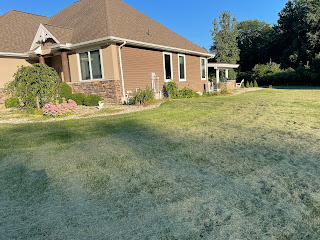 BUT---after two times around, she was getting the hang of it. Hey, this is actually pretty fun! Brian said maybe go a certain way one way in rows, and then a certain way another way with a different directional set of rows, but heck! Sparky is a retired special ed teacher so she just went round and round for awhile, and then when she got tired of that, she started making crop circles. But hey, the lawn got mowed. It all turned out ok......Brian and Lori were super happy the job got done. Hey, Sparky might be interested in more mowing jobs or landscaping in the future, guys, haha....Here she is safe and sound back in the garage. And the lawn mower is safe and sound, too. haha. 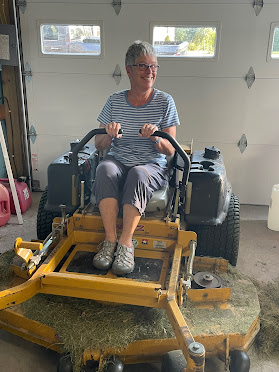 One last ride on the Pumpkinvine Bike Trail. Sparky did 30 miles today--a new record! Nothing too special to report on the trail except that Sparky discovered that she prefers to ride Eldy's Trek bike over her Cannondale Quick 4. The "rare species" cactus that was reported last time growing just on a hillside above the trail has disappeared. You don't see cactus growing much in IN, but it was there for awhile and doing quite well! This big boy came over to say hello as Sparky stopped for a breather. Wonder what kind of cattle he is? Those are some FAT horns!!!! 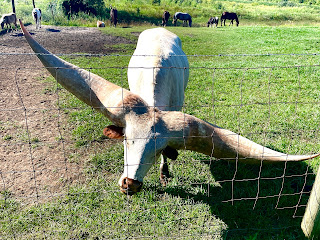 And with those fun adventures out of the way, we will see you later in Michigan! Bye for now.....

Posted by Jeannie and Eldy at 7:20 PM