We booked this park in May, having never seen it before, but it had good reviews. We've had to book VERY far ahead for both private and membership Thousand Trails parks because of all the people out on the roads now, many newbies and the already seasoned travelers out in full force. So far, we have been doing pretty well with our reservations. It's not easy picking out campgrounds and making travel plans that far in advance but Eldo does a whiz bang job of it. He uses RV Parky, the app, and also Trip Wizard to figure out how far from one destination to the next and spends a LOT of time working out all the details. (Sparky is too ADD to do the research, unless it's a craft project, haha.) 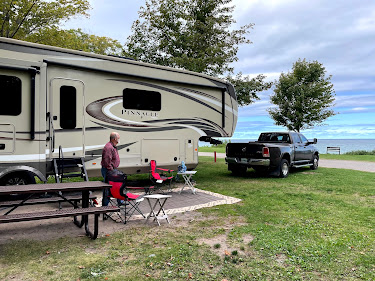 So here we are in the Woodland RV Park in Grand Marais. It's a city owned park, it's beautiful, AND we scored a lakefront site with a terrific view of Lake Superior! 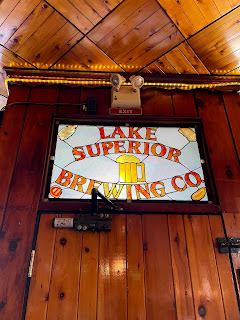 Grand Marais is a VERY small town that has been hit hard by the fallout from Covid. There is a very small grocery store in town (which is excellent for its size) and a couple of small taverns and that's about it. We ate a simple meal at the Dunes Saloon, the Lake Superior Brewing Company. It was just ok, (Just ok? asks E. Yep, just ok.) But it had a cool vibe inside. Check out that ceiling just above the sign!

No restaurants that serve breakfast, one of our favorite things to do on a Sunday, but Sparky has discovered a couple of food trucks that have breakfast burritos, so she's ok with that! No hiking or biking trails, but hey--there's Lake Superior and the beach right outside your front door. Gotta love walking the beach here with these cool structures people have built out of the existing driftwood. 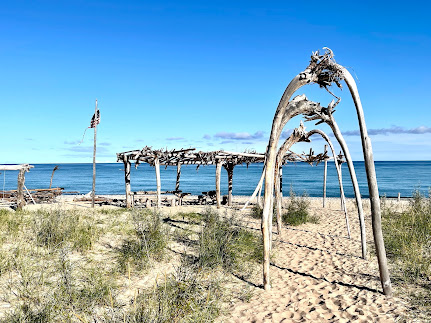 The beach is VERY rocky right at the park's front edge. It's not easy to walk the beach. The sand shifts constantly...it's loose, not packed. If you are a rock hound, THIS IS THE PLACE TO BE! People assume the rockhound stance, and can be found zealously searching for Petosky stones and agates all along the water's edge. Sparky saw a lot of butts and buckets today, haha. Too hard for her aching back. Besides, she wouldn't have a clue what to look for, other than a "pretty rock" souvenir. (Whew! We absolutely do NOT need any more weight in the rig! says a relieved Eldo.) 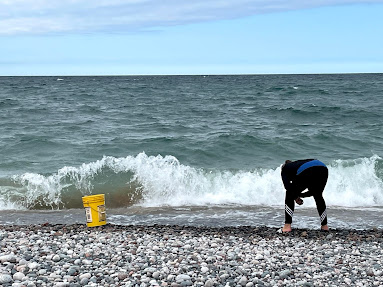 BUT--Sparky could become a rock hound easily if she had more time to learn about it. (Uh-oh! Sparky, we have a weight limit in the rig, and we are already exceeding it due to--your crafts supplies? warns E.) Geesh, she was only thinking about it....haha. 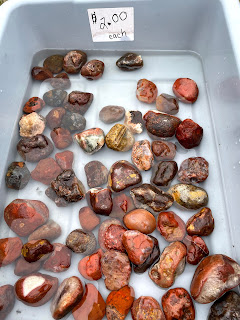 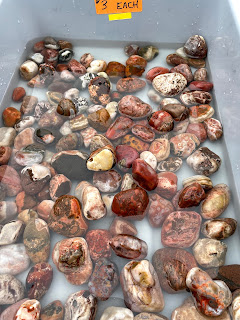 Sparky went to a rock hound show next door this weekend, and it was really interesting. To the novice, it just looks like a bunch of rocks. Can you really tell the difference between a 2.00 rock and a 3.00 rock? A rockhound aficionado can! 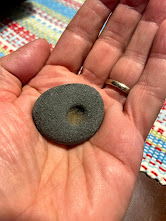 Sparky learned that this is an Omar...a rock with an indentation made from another rock which was previously embedded in it. A vendor gave her a little souvenir of one from the show for free!

It was very interesting to see all the different locations around the world and variations of agates and rocks that had been collected at the show. There was something called a pudding rock, vendors were describing how the rocks were formed and the differences between them. It was just a completely foreign world to Sparky! She just can't get her head wrapped around paying 3.00 on up for rocks that you can find at the beach up here in the U.P.! They ARE beautiful in the water when they are wet. 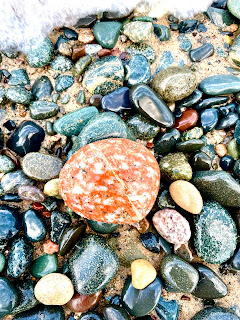 The birches and/or aspens that had fallen into the sand and water were still beautiful..... 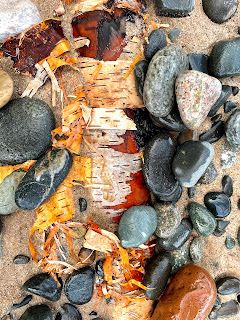 People love to stack rocks and make fake cairns....Cairns are supposed to be indicators or landmarks on a hiking trail, but at the beach, people are just enjoying the childlike side of themselves by stacking rocks. 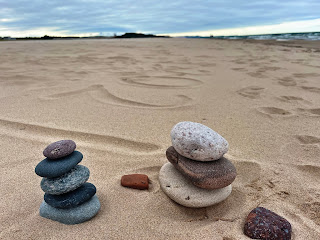 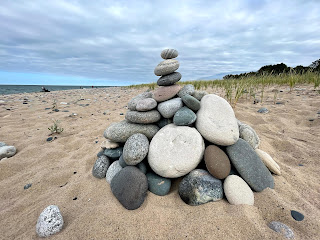 And here is some of Mother Nature's artwork..... 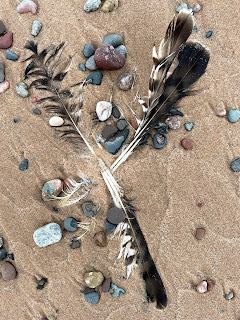 This is part of the shoreline...VERY unstable walking and many more rocks than what is shown here, but there is a nice beach with a lot more sand down the road just a bit. 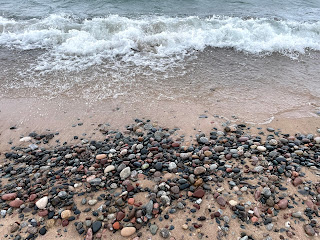 Here is a better view of all the rocks.... 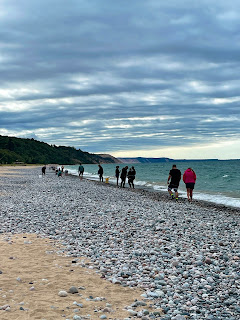 Even if you dig a tunnel down into the sand, the rocks are still there! 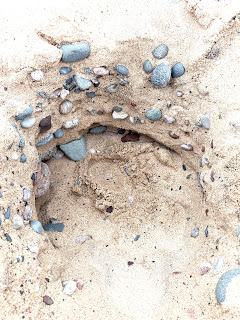 Watch out for sharks! NOT! 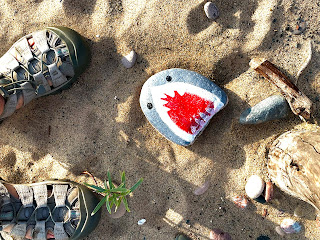 We really enjoyed our short stay here in Grand Marais....We hope to come back again some day...the temps were Sparky's idea of terrific! Sixties during the day, fifties at night...She is in 7th heaven.....Bye for now! 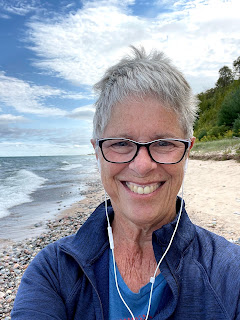 Posted by Jeannie and Eldy at 6:59 PM