We've had an amazing 4.5 days here at this campground that sits on the St. Mary's River, just minutes away from the Soo Locks. The average price for a night's stay here is 32.00, which is very reasonable, as campgrounds are now increasing their rates all over the place to make up for revenue loss last year. The campground has water and electric,  but no sewer. They do have a dumping station, so dump when you come, or before you come in. The sites are roomy and big rig friendly, almost no trees. Many of the sites have a view of the river even if you are not a waterfront site. The freighters are so big you can see them anywhere on the grounds, passing by! 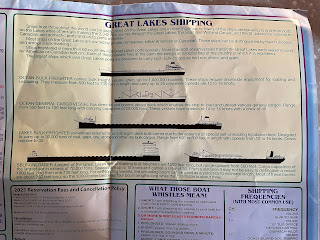 When you check in, the campground map has a diagram of the freighters you'll be seeing, and what the horn blasts mean. It's a great place to freighter watch, that's for sure. The big boys (the 1,000+ footer freighters), there are thirteen of them, pass by within yards of the campground, well, maybe a little bit more than that. There's a couple of parks right next to the campground, Rotary Park for one, that gives you an even closer "drive by" view of the freighters as they come around the bend in the river, coming even closer to shore.

Eldy downloaded an app called "Marine Traffic". It's full of information, but you have to pay extra if you want to know what kind of load the freighter is carrying. It's funny, everybody must be using some sort of app, because everybody comes pouring out of their RVs when one is scheduled to pass by within minutes of the campground, and they all stand by the river's edge, even in the rain with their umbrellas, to see the freighters go by. The app shows the location of the vessel, shows the speed and estimated time of arrival to the locks.

We remember some of the freighters from our stay over ten years ago, and they are still in operation, of course. Many of them launched in the seventies and eighties, so they are aging, just like we are! One of our favorites is the Paul Tregurtha, the "Queen of the Lakers"...Sparky's brother, Rich, shared that the Tregurtha actually got grounded in the St. Mary's River, August 12, 2012. The stern pivoted and grounded on the opposite side of the river, completely blocking the channel. It took two tugs to move the stern of the ship back into the channel. Then the salvage experts raised the bow by filling the empty stern parts of the vessel, re-floating it and setting it free. That would have happened very close to the campground if we understand the location correctly! This episode sounds a LOT like the Ever Given, which blocked the Suez Canal for five days! 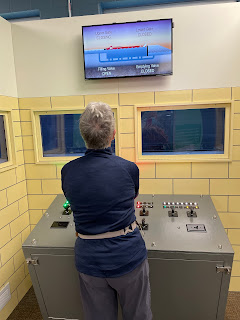 We spent one day at the locks and saw two freighters pass thru the locks. You can find all kinds of information all over the internet about the locks and at the viewing station in Sault St. Marie. Sparky says it's really fun and there are cool exhibits at the viewing station. One is a simulator where you pretend to be operating the lock switches as you get commands. In front of you is a series of panels showing the freighter in the locks moving as you dial the controls and the water "fills" the locks then drains.

Sparky has chosen to share some highlights from "walking the bow to the stern" portion of the viewing platform. They have placards on the viewing platform to equate the distance of a typical 1,000 foot freighter. Sparky read all of them but the last three which were fenced off due to some construction. One thousand feet is a LONG distance and really helps you get the idea of how massively long these freighters are! 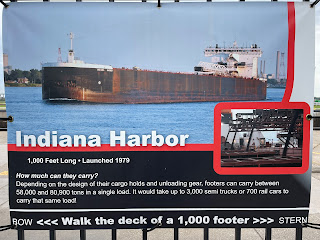 Some great information on these placards...Do the freighters rub the walls of the locks? Sparky can say unequivocally yes! Judging from the severe scrapes of the sides of some of the vessels! The Poe lock is 110 feet wide. The freighters are all 105 feet wide. You do the math..there is not much room for error! The captains like to come in tight to the north wall to allow as much room on the other side for water to flow past. The Ojibway has had its share of close encounters, don't you think? 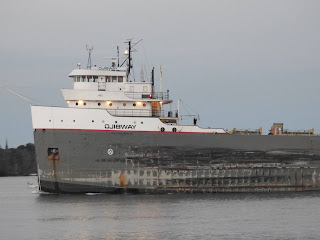 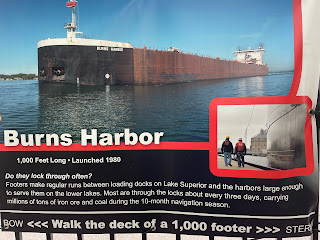 The freighters cycle thru the locks about every three days. We started to see some repeaters during our stay. We never got tired of watching them come through and hearing their awesome horn blasts.

Sparky's favorite (one of several) was a Canadian ship with beautiful graphics on the pilot house. 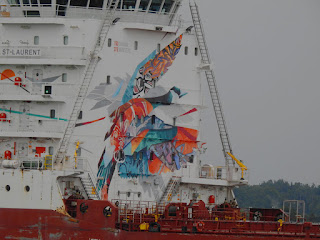 The freighters carry as much cargo as 3,000 semis or 700 rail cars, so it's a much cheaper way to move cargo and amounts to huge savings every year for industries. 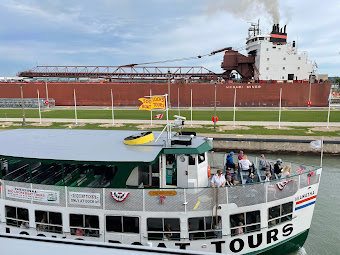 The Mesabi Miner passed by our campground and went into the locks, one of about 20 freighters (some of the same making the return journey) during our 4 day stay at the campground. How many crew members work these ships? About 15-22....mostly men, but more women are coming on board...The crew get great meals, a private cabin for each member, have air conditioning and access to exercise equipment and wi-fi, barring the occasional dead spots out on the Great Lakes, just like we encounter sometimes while traveling!

Some more miscellaneous facts: it takes 22 million gallons of water to lift a ship. They are building a new lock which won't be in service till approximately 2030 and deepening the old locks. The locks close on January 15th, the ships head to ports for maintenance, and they reopen on March 25. During this time, the crew goes ashore and spends time with family.

We thoroughly enjoyed our stay here at Aune Osborn Campground and the Soo Locks. 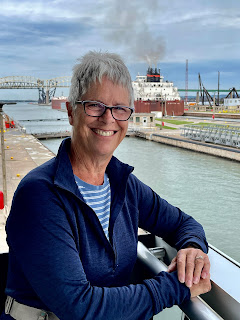 We are headed next to Tahquamenon Falls State Park for a few days. Hey, Sparky spelled that without spell check! Not bad.....(That took a few tries, laughs Eldo.) Oh! Almost forgot--a couple of recommended eating spots in Sault St. Marie--The Antlers for the decor...and a good steak. And Penny's Kitchen for breakfast and a neat cafe vibe....Bye for now!

Posted by Jeannie and Eldy at 8:33 PM