This and That About the Mammoth Cave Area

We have two more days here at Diamond Caverns RV Park. We had to extend our stay one more day by paying the daily fee for the first time since we got here for this park--44.00 in order to wait for parts for our truck to come in. Darn truck is still leaking oil--something about a gasket or seal that was not replaced two weeks ago because the part wasn't available and they used the existing part or something like that! It's not a bad leak, but when you pull a behemoth RV that's loaded at about 16,000 pounds, you better have your tow vehicle in tip top shape!

It's raining all day here in Park City. We will run errands, finish up laundry (usually 2.50 to wash for each load, and 2.50 to dry), clean house, the normal household stuff you do when it rains. But Sparky, clean house? What's there to clean in an RV? PLENTY! You wouldn't believe how much dust there is that circulates from outside air and through the vents. Even though we have mats outside and a wipe your feet mat inside the door, there is an amazing amount of dust that accumulates on the surfaces in just a day or two. With all the hard water that is at the campgrounds, there is buildup on the fixtures and in the shower and sinks, too. Some people have big honkin' water filtration systems attached to their camper or campground water supply but we don't. So today is also cleaning day....

Our rig has a built in vac system which is kinda cool. Just hook up the hose at the kick plate vent, and it turns on. Sparky doesn't like it much because the plastic hose is so long even though it's stretchy, (in order to reach from one end of the coach to the other), it is unwieldy and it's like trying to wrestle a slippery boa constrictor, to work her way to the back of the rig and around corners. The hose is always trying to shrink and jump back while using. Most of the time, she just gets a little dustpan and broom and uses that.

OK, here's the odds and ends...Places to eat--it's not the hot area for local eateries, this is cave country! BUT--There's a good Mexican restaurant called El Mazatlan at the Glasgow exit, one exit north of the park. Good street tacos--steak, cilantro, onions with pico de gallo.

There is also a Walmart and a Cracker Barrel, a Long John Silver's/A &W--they are all at the Glasgow exit--about 15 miles driving distance. People like the Amish bakery, Farmwald's Dutch Bakery and Deli, but we experienced a bad breakfast there. However, the mini donuts were wonderful! You'll have to form your own opinion on that one, as people do for all restaurants. There is an R & S Salvage Groceries in Horse Cave city which has Amish deli meats, donuts, and sandwiches on homemade breads and a bunch of salvage stuff. We didn't try that one but it gets very good reviews. There are very good Dollar General stores in the area that stock groceries for your basics. The one in Park City is very good. We found one pizza place called Turtellinis which had decent pizza. We didn't try the Cave Pizza place in Cave City. They had limited hours but good reviews. Yelp is our go-to app for places to check out, so we recommend that.  Other than that, we didn't check out any other restaurants. Bowling Green is 22 miles from Park City, and ALL the chains and major shopping stores are there if you want a nice dinner out or need to go to Best Buy, or Hobby Lobby (haha), or Michaels. (Sparky hasn't been to Hobby Lobby in WEEKS, will miracles never cease!? exclaims Eldo.) Sparky is trying to downsize, haha.

Sparky FINALLY did the one and only offered cave tour at Mammoth Cave. It's self-guided at this time. You attend a briefing at the shelter area first before heading down to the main entrance. Mask wearing is mandatory at all federal facilities and Mammoth Cave is  mask on, mask up time as well. Neighbors said a lady went on a cave tour at Diamond Caverns yesterday and ended up having an asthma attack IN THE CAVE. She passed out, and they had to initiate a "rescue" from inside the cave. She was ok, we later found out. 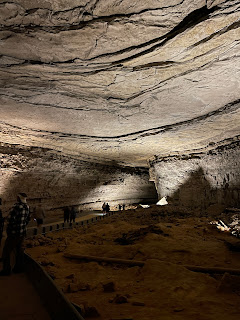 At any rate, what was the self-guided tour like? It was ok....it's 23.00 WITHOUT the senior pass,  and half price if you DO have your senior pass. You basically are walking a very shortened version of one of their several use-to-be-offered tours. There is no ranger leading the tour, but they do have several rangers stationed at a couple of places in the cave for questions and answers. The only tour offered right now (April 2021) is called the "Extended Historical Tour". As soon as you get into the main part of the cave, the Rotunda, you are directed to go right or left as they try to disperse the touring group more evenly. The right fork is a short trip on slightly worn down uneven ground, and it's very disconcerting to not be able to see your feet, if you have aging eyes with beginning cataracts like Sparky does. The blue paper mask kept fogging up Sparky's glasses BIG time as the cave was so cool and damp, so that was an additional hazard.You can't tell if you are going up or down until you "feel " it with your feet, and it's bumpy. You are not allowed to use flashlights unless your source light is pointed at your feet at all times. So you need to be careful and carry a small light source for your feet if dimness might be a problem. Sparky saw a little girl with a mini flashlight on a lanyard pointing down, and it was perfect! You are not allowed to use flash photography, either. There are a couple of lit up exhibits of cave formations with can spotlights, but nothing spectacular, so the walkway is dimly lit. The fork to the left is far more interesting and about four times as long. 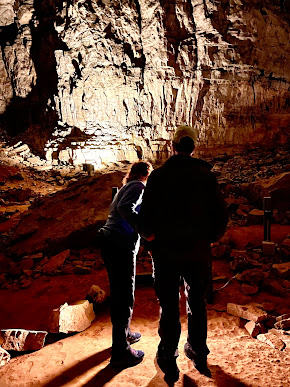 Sparky saw discarded mining equipment, an area that was used for church services at the time, some great rock formations, and the tuberculosis huts. The walkway for this part was mostly stone pavers and level. The TB huts were very interesting. There were about 14 of them constructed down below, and only two stone ones remain today. Tuberculosis was the leading cause of death in the 19th and early 20th century and was called the "white plague".
Back in the early 1900's, doctors thought cave therapy might be a good place for a sanitarium for people suffering from TB.  After all, miners and visitors reported feeling remarkably better after visiting the cave. It was thought that "cave air" was better than ground level air. So an experimental "hospital"/sanitarium was established in the cave, by Doctor Croghan, a man suffering from TB himself. He invited 16 people to take up residence in the cave in 1842. If you had a lot of money, you "rented" out a stone hut and stayed down in the cave for weeks. Four people stayed in one of these little stone buildings. Those of lesser fortunes stayed in wooden "huts". Some of your meals were brought down to you by enslaved attendants from a bustling hotel up on the earth's surface. The attendants emptied the chamber pots and tended to the needs of the patients, who usually ended up dying because the moist, damp cool air was NOT beneficial to a TB patient. The experiment lasted five months. Five patients died and their bodies laid out on what's now known as "Corpse Rock". Dr. Croghan returned to the surface with the remaining patients. He died later from his TB, his experiment a failure.

Sparky liked the "Methodist Church" section of the cave. Church services were held in this portion. The minister would climb higher up in the caverns and with lit torches above him, preach the sermon from a rock cliff. 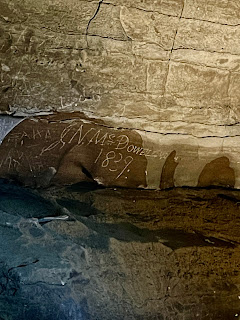 There was also an interesting geological feature called the "Giant's Coffin". There is some authentic graffiti on the "coffin" and then some that is not....As is always the case with features in the national parks. Wish people didn't feel like they had to deface federal property just to leave something of themselves behind!

If you like caves and don't get claustrophobic, this is an amazing cave to explore, especially when they get back to offering more tours. Mammoth Cave National Park has great trails, great caves and offers a great learning experience for families. The one take away Sparky got from this tour was the immensity of the cave system. "Cavers" are still exploring it, mapping it, but it's getting harder and harder the farther they get away from the existing entrances and pathways, to find new passageways and to continue to map the cave system. It's difficult to get financing for exploration as well, as this kind of exploration is not as popular as it used to be. 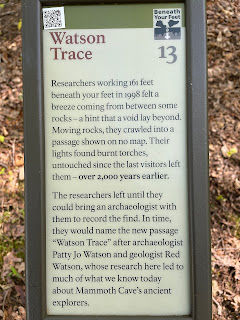 There is one more tour here that you can do and it's called "Beneath Your Feet". It's an ABOVE walking/hiking tour (free!) that tells you the various parts of the cave that are far below your feet. There are little signs along the trails that explain the cave's geological features underground as you hike above on the trails. Very cool!
Very interesting history here, that's for sure! We highly recommend a visit....And that's it for Kentucky for Sparky and Eldo....Hope you enjoyed visiting the area with us...

We are off to southern Indiana tomorrow....two weeks at a Thousand Trails park, then a little more north to the Shipshewanna, IN area for two weeks, then Alaska here we come! Bye for now....