Sparky has been lovin' the trails at Mammoth Cave National Park. There are a couple in particular, that she has frequented several times now because they are so pretty and are considered "moderate" instead of "easy". Easy is nice when you are out for a stroll, moderate is great when you are hoping to get the heart rate up and use a few more muscles!

When you get a trails map at the information center at the Mammoth Cave Visitors Center, you get a variety of ELEVEN looped trails that if you start one, feed into another one, then pick up another one, you can EASILY get 5 miles and more. The map is called the Front Country Area Trails, and has the most commonly used ones at the park that are all close to the visitors center. The front side has the map, the back side has the name of the trails, how long they are, and how they are rated. You can backpack and day hike more serious trails further into the park, but the front trails are plenty challenging for Sparky for now. The back country trails have a lot of horse trails, horse poop, ticks and litter according to some reviews on the All Trails app. Well, that's not good. Having had one tick bite already in Texas, Sparky is not up for dealing with more ticks, so she's going to stick to the recommended front trails. Besides, the front trails are blooming with wildflowers, at their peak right now. 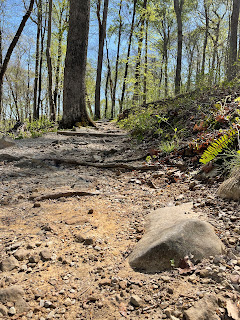 The Green River Bluffs Trail is one of the longest trails close to the center of the heart of the park, it is 1.3 miles long. If you hike it from the start at one end, then double back, you get 2.6 miles of lots of elevation changes, rugged terrain (rocks and tree roots) in spots, and beautiful views, albeit occasionally, of the Green River alongside of you as you hike. And if you are REALLY lucky, you might see some wildlife, as Sparky did today. Wildlife can be anything from deer to snakes--copperheads and rattlesnakes are in the park. You are not allowed to kill snakes in the park. Well, that's not good! The only good copperhead snake or rattlesnake is a dead one, Sparky thinks. So far, Sparky has only seen a black racer, a BIG long one cross her path. Ugh! 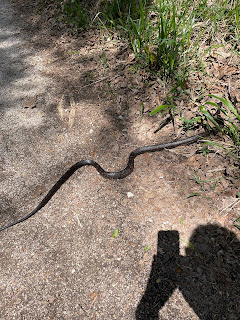 Sparky is starting to make some videos of the hikes and going to put them on Youtube in a couple of weeks or less. Right now, cellular signal is terrible at Diamond Caves RV park, so she can't upload for awhile yet. So she was out walking the Green River Bluff trail today, recording the hike, and lamenting that she hadn't see but one deer in the several long bike and hike rides she's done so far all this week. She just got done talking about only seeing one deer yesterday that came running by her by the visitors center, when she rounded a bluff, and SIX deer were grazing at the top of the bluff, Sparky downwind on the trail a couple of feet below, but the deer were 15 feet or less away from her. (It wasn't much of a bluff.) They continued to munch and chomp on the plantings on the hillside and then meandered one by one in front of her and behind her, crossing the trail and heading downhill!  You can HEAR them eating on the video! Sparky was really really excited to be so close.  And although deer are commonplace in Indiana where Sparky and Eldo used to live, it's still cool to see them in the wild, up close and personal when you are NOT in your car! Sparky captured ONE shot of the last one headed down the hillside. 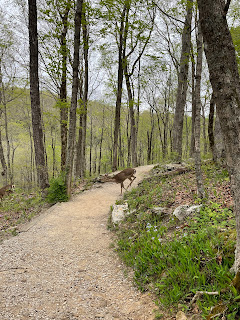 Sparky was so excited, she called Eldo. "Eldy---Guess what I just saw?" He pauses and says, "A bobcat?" That's what Sparky encountered on a hike back at the Estero Llano Grande State Park near Harlingen, SE Texas, a couple of weeks ago and she called Eldo then...Hard to top that! "Nah, just a bunch of deer right on the trail, eating in front of me! But THEY ARE SO CLOSE!" They just couldn't smell Sparky because she was downwind (and used deodorant this morning?) No, she didn't, haha. It was just a special experience to be that close and see their fur and some detailed spot coloring. So stay tuned, and when Sparky manages to get a couple of hikes uploaded to Youtube, she will let you know. 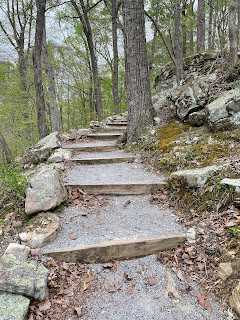 Another trail that is a heart beater is the River Styx Spring Trail. It's a .4 mile trail, but that four tenths is a doozy! Lots of elevation if you are at the bottom, and a knee killer if you are headed down. After a relatively easy ascent at the beginning, then the steps begin, and there are a LOT of steps on this switchback trail to get back up to the top of the ridge. The steps are not your usual stair steps. They are big lumber pieces to keep the gravel from washing away downhill when it rains. So you are "highstepping" it and lifting those legs high and far in front to climb them. It's rated as "moderate" and it is a heart pumper upper and a knee workout going up for sure! This trail goes to the River Styx Spring, which is where an underground river is exiting the cave to go into the Green River.The third trail Sparky has enjoyed is the Dixon Cave Trail. Again, it is only 0.5 miles long, but it is also rated "moderate". You get to see a scenic pretty view of the entrance, the cave is closed to the public. It's closed because hibernating bats use it and Kentucky is worried about the spread of white-nose syndrome, which is killing bats. Dixon Cave is a winter haven for Indiana bats, an endangered species. More and more caves are becoming unsuitable for bat habitation due to human interaction. People can harm hibernating bats by entering caves and waking them up. That causes them to use up their fat reserves before winter is up. This cave has a bat friendly gate that keeps people out and bats can come and go. It's not much to look at, but the history is interesting. 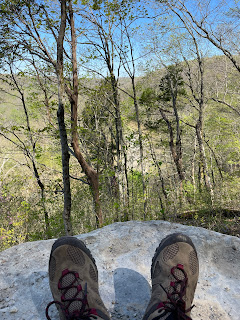 By picking up connecting trails, you can add to your hike and walk all day long if you wanted to! By the way, "moderate", in Sparky's humble opinion, means elevation changes, some rough terrain such as rocks and tree routes, having to carefully pick your spots to place your feet, (usually while ascending or descending), and sometimes very narrow trail to navigate. No big boulders to clamber over nor tight fits to squeeze through nor extreme elevation climbs-- that would be Sparky's definition of "hard". Sparky recommends a hiking pole or two for seniors. (Sparky wished she would remember to take her hiking poles, next time for sure!)

For the most part, the trails are marked well, but some of the signs are so aged that you can't see the directional arrows, and many of the trail connector roads are not matched to the direction that the arrow might be pointing. Got that? Sometimes there won't be a sign telling you the name of the third trail between two other trails, and so you just get on it and hope it eventually connects to another better marked trail or back to the VC (visitors center). It does.  If Sparky can't get lost, then NOBODY can get lost on the front country trails. (Now, wait a sec, cautions Eldy. She COULD have gotten lost in the past three days and just not told me). True, true, very true. (AHA!!!! I knew it! Eldo gloats.) Well, not for very long. Sparky took one of those unmarked middle trail paths and it took awhile to get back to the main loops again.

SO-o-o-o...that's it for now...peak  wildflower season is here this week, and there are a couple more hikes in the works to see more wildflowers, shorter hikes....We'll keep you posted and we've got lots more time (2 more weeks) to take advantage of a cave tour or two. Although we have already done those, and COVID is making it harder to explore and tour, we will do what we can do and are allowed to do to enjoy our stay here at the Mammoth Cave National Park in Kentucky and share that with you. Thanks for stopping by....See you next time!