Cedar Sink Trail and Turnhole Bend Trail, And Sparky Gets Bit by Ticks

Sparky LOVES hiking the trails at Mammoth Cave National Park. Don't worry, the Mammoth Cave Tour is on the agenda for the next day or so. There's only one cave tour available right now, and it's self-guided. So Sparky is exploring all the trails but one on the ranger map sheet guide, there are 11 trails listed. 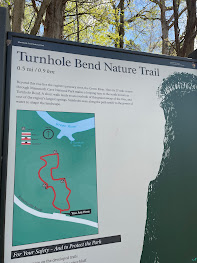 The Turnhole Bend Trail- 0.5 mile loop trail. Listed as moderate because of a few stairs. Sparky would say this trail is more towards the easy side than moderate. Two sinkhole views and a pretty overlook of one of the largest springs of the Green River. You access this trail along Brownsville Road, before you get to the visitors center at the park.
It's a quick little trail, with a little bit of elevation and a packed gravel path all the way. The sinkholes are interesting but not spectacular. On a spring day is a wonderful time to see Kentucky wildflowers. Sparky learned about some new ones--Fire Pinks (the red ones) and Jacob's Ladder (the purply blue ones).
The other trail that Sparky went to in the same day was the Cedar Sink Trail. The Cedar Sink Trail is far more interesting! It's a one mile trail with a massive sinkhole at the bottom of the trail. There are several sets of stairs that take you down to the sinkhole and then back out and up again. Talk about a major heart and leg workout! Sparky counted 107 steps in the one stair metal step section, and about 65 wood beamed stair steps in the other section, but there are actually more steps than that! The scenery is wonderful! You walk a flat level trail for awhile, then take the .5 mile loop around for additional elevation change and stairs, follow the steps down and you are in a different world from the forest you just came from! 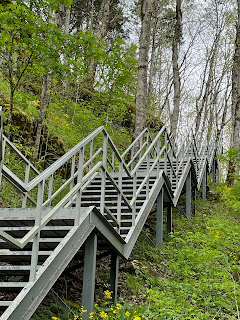 The trail takes you into a deep rock shelf section overlook, where the immense cliff rock is immediately over your head and you look out over the beautiful forest floor down below. 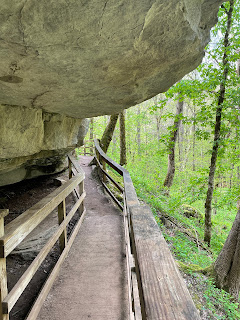 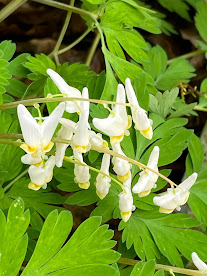 There are beautiful wildflowers Sparky has never seen before, like these Dutchman's breeches. You have to look carefully as you traverse the trail to find these little gems. They are only in one little spot on the side of a cliff down near the bottom! These were nestled in a rock cranny just before the cliff overhang.
You reverse your steps and come back onto the trail to continue down to the immense sinkhole. It's a mess of log jams and mud slides, but it's still cool to see nature at work all around you. Sparky loves geological features and loves to learn how they are formed. There is great signage on the trail that explains sinkhole formation with photos and explanations. Very cool! 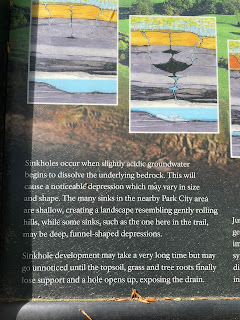 Back to some beautiful wildflowers....trillium everywhere down at the bottom of the ravine and sinkhole....The leaves for these beautiful flowers are HUGE. 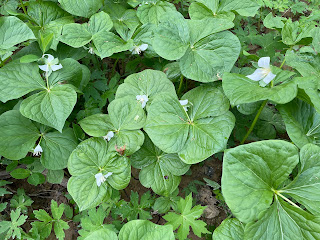 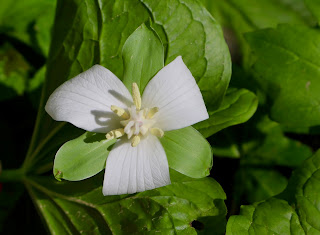 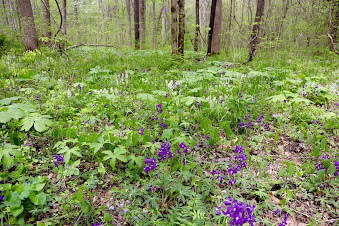 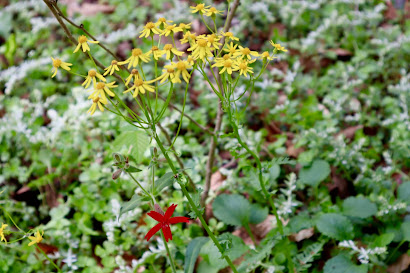 Sparky's favorite is the Pussytoes! Don't they look like little kitten paws?
Well, enough of the wildflowers for now...Sparky will say, if you are out and about and want to learn the names of the plants and flowers, check out the app "Seek". It's really cool. You just open the app, hold your camera phone in front of your screen, and the Seek app tells you immediately what you are looking at, then takes a photo of it with the plant name. You can build your own little species library of what you are looking at in the area you are in. There are built in challenges of finding a certain number of species of plants/flowers/trees and little motivating badges. That's how Sparky found out that this plant (below) is another type of trillium, the toadshade--or a trillium sessile. Sparky even learned a new vocabulary word--endemic--a species that pertains only to a certain area. The toadshade is specific to this area in Kentucky. (Sparky has a pretty big vocabulary, explains E. but she is still learning!) 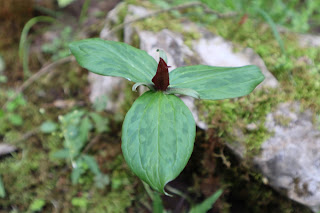 Sparky has learned these wildflowers are in and on the Kentucky Mammoth Cave trails thanks to SEEK--perfoliate bellwort, star chickweed, Virginia Spring Beauty, American Jumpseed, wild geranium, and more. Sparky also learned on her hike today from talking to a park ranger that garlic mustard is an invasive species and all the debris on the trails where plants have been pulled up and thrown on the side of the trail is not from deer foraging for roots or food, but the rangers pulling out the invasive plants and then letting them naturally decay at the side of the trail. That's to prevent the garlic mustard seeds from developing and spreading the invasive plant! Well, how about that? So much to learn, so little time!
Uh, Sparky, what's that green stuff hanging out of your coat pocket? wonders Eldo. Ummmm...oh, THAT? 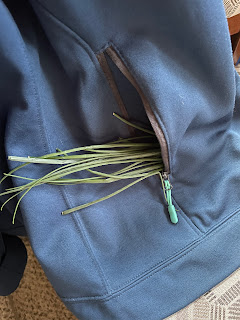 It's wild chives! They are growing all over the place at the campground and all around the grasses and picnic areas at Mammoth Cave National Park. (Hmmmm...maybe that's where she got bit by the tick, thinks E.) Sparky LOVES chives on a baked potato....and sour cream....and butter.....and cheese.....
We have less than a week to go, so Sparky better hurry up and get that cave tour in soon! We'll see you later.....
WAIT A SEC! SPARKY GOT BIT BY A TICK(S)? WE WANT TO HEAR ALL THE DETAILS! Nah, Sparky is sure you don't, but just in case....here's a fast rehash. Sparky has been bit by a two different ticks....one was a month ago in Texas, after a hiking a certain park regularly. She has been watching the spot very carefully. No reactions so far. Then two days ago, she got bit AGAIN. Both times, wearing long pants but short sox, untucked tee shirt...Somehow the first tick made it to the belly button area, the second time the tick only got as far as the calf of her leg. The first tick went bye-bye in the trash, Sparky was so grossed out. The second tick met his demise, death by freezer/tweezers. He is currently in the freezer morgue. Sparky is going to have a Lyme disease test soon to be sure nothing is going on. She has since bought a special tick specific spray to spray on her ankles and clothing, is now wearing long socks when hiking plus long sleeves, tucking in her shirt, and is thinking about duct taping her ankles, pants to the sox. Sparky never goes off trail not even to take photos but occasionally steps to the side of the trail for a photo. She really isn't sure how she picked up the tick, except that at the park in Texas where she used to walk every day, there were long grasses at the sides of the trail. Here in Kentucky, she thinks it was because she waited at the side of the road for a few minutes and it was in long grass. So-o-o-o-o...That's the latest about ticks. They are out there and it's tick season. A ranger said it depends on how long the tick was on you, the sooner you get it off, the better! He said if it's within a three to four hour window, I should be ok. The DOCTOR seems to think how long the tick is on you does NOT make a difference....They start sucking your blood right away. Sigh. Yuck. So check yourself regularly when hiking or even just walking the local trails, and CHECK YOUR PETS as well. Use some kind of prevention bug/tick spray/repellent.
And that's all the news for today....Really! Bye for now.....

Posted by Jeannie and Eldy at 7:25 PM