More Things to do in Harlingen, Texas Area

We were driving around town one day running errands and saw a HUGE flock of birds/ducks at a local park, Pendleton Park in Harlingen. Sparky got all excited..."ELDY!! We have to stop at this park! Look at all those birds/ducks/wildlife!" He gamely pulls over into the park and prepares to sit for awhile so Sparky can capture some photos.

It was one of the largest flocks of  black bellied whistling ducks Sparky had ever seen. This is their hangout here in Harlingen. (How'd you like all that alliteration?! The teacher in me can't help myself) There must have been almost a hundred, and they were whistling to beat the band, haha! It sounds just like a whole bunch of bad whistlers, lol....Not sure if they were looking for a mate, taking a migratory break, or if they are here all the time, but they were all around the pond in droves at Pendleton Park. They are a cool looking species. They rest on one leg. These each have a leg tucked up under their feathers. You'd think they'd get really tired just standing on one leg! 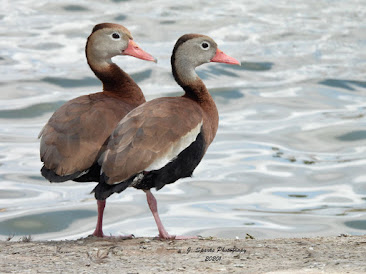 Another cool species we saw at the same park was the Muscovy duck. It's the only domestic duck not descended from mallards. These strange, warty faced male ducks are the largest duck in North America. When they are young, they are considered good eating! They've been around for a very long time. The Aztec rulers wore cloaks made from their feathers. You can see why in the photo below. 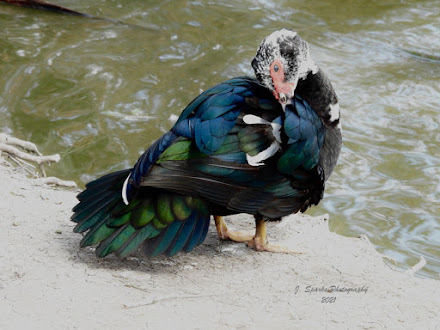 A mother's got to love this face, right? 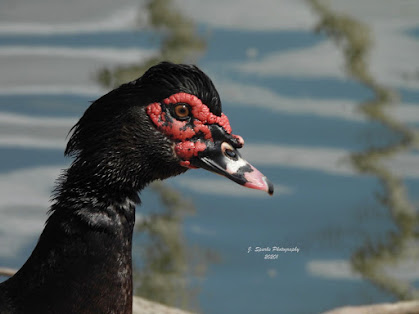 On another day, we headed out to Bentsen Palms State Park, in Mission, TX. It was about an hour's drive. We just wanted to check it out and as we got there later in the afternoon, we saw that there was a 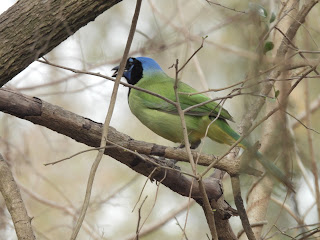 lot more to explore than in just a day. There are nice trails there of short duration, anywhere from under a mile to a couple of miles. There are bird blinds and trails that seem to attract certain species. We saw a green jay just a few minutes after paying our 5.00 entry fee! What a gorgeous SW Texas bird! Sparky is having all kinds of problems with the focus on her Nikon Coolpix point and shoot 950 camera. It won't focus despite lots of different efforts to fix the problem and beyond the obvious ones like make sure it's on autofocus, or do a factory reset and try all kinds of different settings. It's still under warranty, so it's going back to the factory. The first five months, it worked great! Sparky managed to catch the cardinal before we headed over to another part of the park. 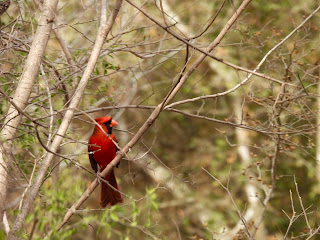 We are going to head back with our bikes soon. There's a butterfly center just down the road from the park as well. We will report back on that soon. We'd like to say we have all our ducks in a row, but when you are RVing, there's always something else that is going to pop up to change your plans. 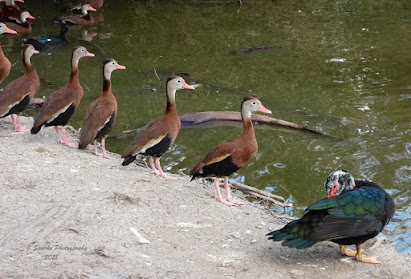 One of those things was we got to get our vaccinations so now we will be spending an extra week added onto our three week stay here in Harlingen.

Eldy had been watching and registering us everywhere he could think of, and we were beginning to think we were in RV No Man's Land for a vaccination--not a Texas resident but here for the winter in Texas, Florida resident but not in Florida. UNTIL---he got a news article on his phone saying that a pop up clinic was opening up in Harlingen yesterday. It started at 8:00 AM. You had to come in and get a wristband. There were 1,000 allotted. You get a wristband, you get to get vaccinated THE NEXT DAY. It was about 2:30 when he saw the news article. No way, there's probably not going to be any left. BUT--Eldo doesn't give up that easily. He called the city health department THREE times to find out if they had any left. He got through on the third try. They had a few left, they said. We boogied over there, got in line, and they shut down the line RIGHT AFTER US. Sparky was #999, Eldo was #1,000. We were able to be vaccinated with the Moderna vaccine. Four weeks from now, we go back. So-o-o-o...with all this extra time in the valley, we should know the area pretty well by the time we get ready to leave in late March...Stick around, there'll be more to share! We love having you along for the ride, wherever we go....Thank you for reading!

Posted by Jeannie and Eldy at 7:40 PM