Things to do in Harlingen, TX

We always stop at a the visitor's center to get info wherever we go. We talk to others at our park and find out local eating places, places of interest, and then make a list of things we'd like to do. We stopped at the visitors' center in Harlingen, and Sparky scooped up bags of info on different areas in Texas. (Eldo heaves a big sigh here....it's a lot of brochures and heavy paper!) Here's the first stop on our list, lots more things to do coming soon in the blog.

Hugh Ramsey Nature Park. A fellow park resident told us he saw javelinas (have-a-leen-as) and there are bird blinds and feeders there. We hit the jackpot within two minutes of arriving there and starting down the first path...a bird blind right away, a half a dozen javelinas, AND tons of birds flitting and flying around.

A javelina is similar to a wild boar, and NOT a pig, although they resemble one. They are also known as a collard peccary, you can see why! They weigh 40-60 pounds and stand about 20" tall. They have poor eyesight but a good sense of smell. They have scent glands on their backs and rub against each other resulting in a "herd" smell, so they can identify their social group. They are usually in groups of 6-12. People say you can often smell them before you see them as they have a strong musky smell. (We didn't smell anything!) They can be aggressive if babies are near, so be careful if you see them! 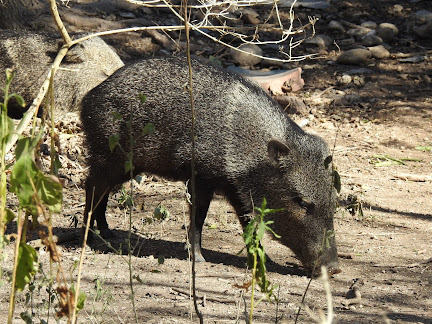 The bird feeders were exceptionally active the day we visited.

We saw cardinals, hummingbirds, sparrows, and we think warblers....This little guy landed on the hummingbird feeder, but didn't partake. 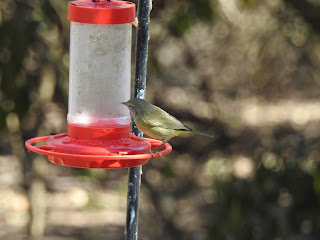 We also saw a large bird that we found out was a chachalaca. It's a tropical, long tailed chicken-like bird. They are common in this area, love thickets and brush, and walk along the branches of trees. They are a tree loving bird rather than a ground bird. They can make quite the ruckus, too! They are kind of a weather predictor, they kick up a fuss when the weather is going to change or a storm is approaching. 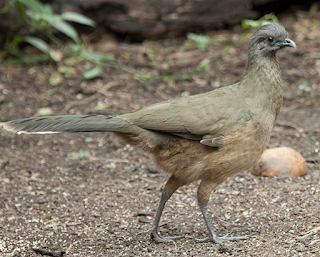 (The name of this bird makes Sparky think of the "Scoop, there it is! Scoop, there it is, shakalaka, shakalaka" chocolate chip cookie dough/insurance commercial. What the heck does ice cream have to do with insurance? Sparky doesn't get it.

Sparky went back a day later, and NADA. NOTHING. No birds at the. feeders, no javelinas. But it IS a really nice park to explore with uneven paths and LOTS of different kinds of cactus that got hit hard by the three day freeze. Dang, those spines are hard and SHARP! 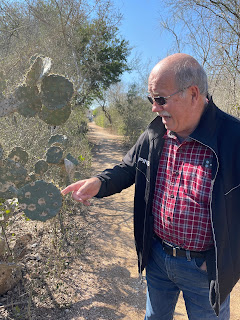 Sparky is in explorer mode. For those of you who read the blog the first time around when we traveled in a motorhome, when Sparky would see something that would catch her eye while traveling, she would yell out, "Eldy--STOP THE CAR! I want to take a photo of__________". Eldo always stops if it's safe to do so, so today, Sparky saw some different ducks in a pond on South Padre Island while we were driving around today. "ELDY! YOU GOTTA STOP THE TRUCK. I SEE SOME COOL DUCKS!" Eldy just rolls his eyes, (No, I don't! he says) but he finds the quickest, safe place to pull over. Isn't he sweet? Sparky had to get a photo of this duck....It's a redheaded duck--that's it. That's the name of it. 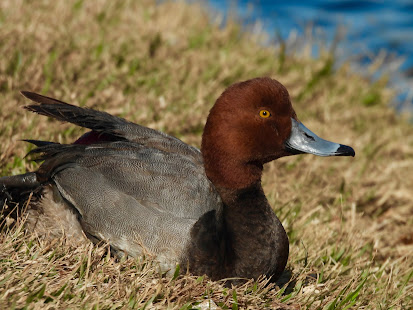 The Rio Grand Valley is world renown for birding, we hope to see many more species of birds as we spend more time in the area. It's almost the time of year for spring migration for birds to be returning to the north.  There are several really cool wildlife refuges in the area, we will check them out and get back to you. See you later!

Posted by Jeannie and Eldy at 9:48 PM