Add These to Your Harlingen, TX List of Things to Do

You gotta visit Hugh Ramsey Nature Park more than one time while in Harlingen, TX. It's not the prettiest park. But it is a nature park with bird blinds, water, ponds, and narrative signage. Unfortunately, everything looks dead and dreary in it right now, except for the colorful birds flying around. It has a lot of trash along the river, the cactus suffered greatly in the 2021 freeze last week and a lot of them died. There are a LOT of big piles of dead branches/brush everywhere, and a couple of the bird blinds are in very bad shape. The park is struggling to keep up with maintenance, but every time Sparky goes, there are a lot of families there, so it's a much used and loved park with birders. Best time to go is during the week and early in the day. Look what Sparky saw this time!  A beautiful red cardinal, a yucca plant blooming, a rufous hummingbird, and a green jay. 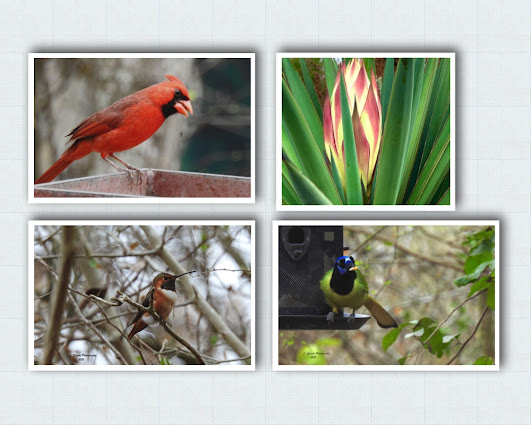 Oh! Almost forgot! Some chachalacas, a common Texas bird, (Sparky just loves to say that bird species name!) plus more javelinas! (see previous post for photos of the chachalacas and javelinas.)
Be sure to see South Padre Island. This year, the island hosted an art trail with art galleries AND the Turtle Trail and the Sandcastle Trail. You get a map at the visitor's center on the island, and if you find all the turtle sculptures (10?) on the island and report back to the visitor's center with photos of each one and post on social media, they will give you a free tee shirt (if they haven't run out yet). So, off we went to see the turtle sculptures and a few sandcastles along the way. It was a really cool and windy day today, so we didn't stay long on the island. It started out in the low seventies, and by the time we got to the island, the temperature had dropped to 57 degrees! Yesterday, it was 87 for the high! 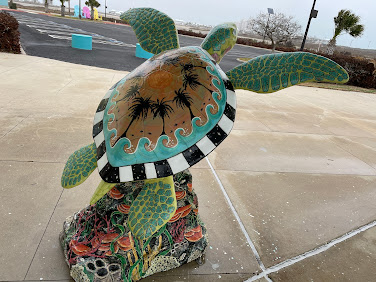 Once you've located the turtles with their cool stories about their names, the theme the artist was going for and the sandcastles, then be sure to stop by and see the wonderful Wyland's Whaling Wall at the South Padre Island Convention Center. (shown in the center photo). It's 4 miles north of the causeway. This is the Detroit artist Robert Wyland's #53 (out of 100), "Orcas off the Gulf of Mexico", and is the only one by this artist in the area. It takes up three sides of the convention center's walls, is 153 feet long and 23 feet high. Wyland paints enormous outdoor murals to draw attention to the dangers marine mammals face in the wild. This particular mural has a lot of species on it--the Orca, Yellowfin Tuna, Tarpon, Loggerhead Sea Turtle, King Mackerel, Red Snapper, Atlantic bottlenose dolphin, Kemps Ridley Sea Turtle, brown pelicans, and more.
After living in SW Florida for seven years and experiencing the white crystal sands of Siesta Key and local area beaches, the brown sand here was a little bit of a letdown. BUT--clever smaller sand sculptures all over town made a dreary March day much more fun as we drove around trying to find the turtles and the sandcastles. 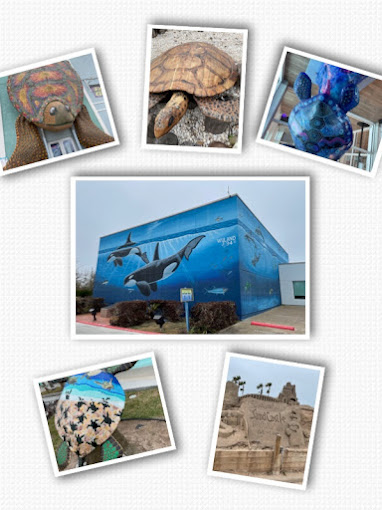 Sparky was tempted to try and get Eldo to stop at Kelly's Irish Pub, it's almost St. Patty's Day, you know, but we will save that for another time... 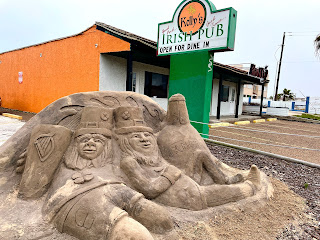 We will be exploring more refuges in the near future...Stick around if you like that sort of thing! If you're a foodie, Sparky has got you covered, too. We are sampling some of the local cuisine before we report on that. (Uh-oh...there goes the food budget, worries E.) But hey, that's part of the fun traveling and using a camping membership. You can try a few more eateries in the process of saving money at campgrounds! (Sigh...Sparky's logical process needs a little fine tuning, thinks Eldo.). Bye for now!