Today was moving day....Key word, "WAS"...we went to pull in the slides, and the BIG one, the big wall slide with the heavy residential fridge didn't budge. No sound, no power, nada, nothing. It's an RVer's worst nightmare. Slide problems are notoriously difficult to solve. The other slides work fine, so that says something about power not making it to the big one. First, we tried unhooking the power cord from the power pedestal, flipping the battery disconnect switch to shut off all power from the batteries to the rig, then reversing the steps and turning everything back on. Nope, nada, nothing.

Next step--get on the phone to Jayco. They tell us there is a power module in the main bathroom that has a reset button and you push that button six times, then on the seventh time you hold it and the other person tries to bring in the slide by pushing the button. We thought the main bathroom meant the big bathroom upstairs. An hour later, after Sparky had removed every single thing from every single cabinet, (And that included all her craft stuff, explains Eldo), there was no switch box to be found. Well, maybe it was outside. Another call to the RV place that is a Jayco dealer in Indiana. They said it should be on the driver's side in the bay, behind an access panel, (maybe).

For the next hour, we removed stuff from the bay, moved it around and looked for the switch box. FOUND IT! 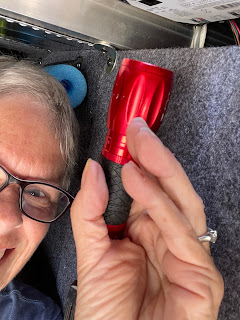 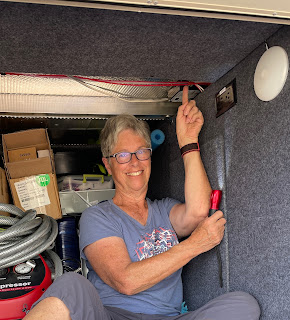 Wrong switch module...that was for the bedroom slide. It works great. Keep looking. Another call back to Jayco. They sent a schematic diagram to Eldy. We look at it. Ever tried to read one of those? Jayco says it's 56" from the floor and they insist it's in the main bathroom. They keep saying it's "above the shelf". Sparky says, "You mean the bathroom with the double sinks and double vanity cabinets, right?" No, it's the bathroom that is in front of the front door. OOOOOOHHHHHHH...that's not the main bathroom, that's the HALF bathroom. Sparky goes looking again. She swears there is no module box and shines a flashlight in the cabinet. The schematic says there is one. 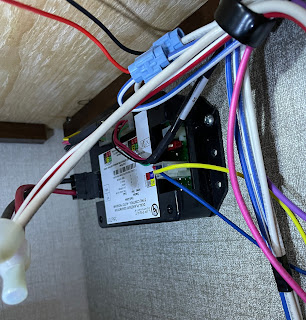 THEN......she got WAY down, almost upside down herself and peered UP into the dark cabinet corner. AHA! There it was. Thirty-one inches from the floor. It was
installed UPSIDE DOWN, jammed into the right corner of the lower cabinet and with bifocals, impossible to see the entire box, to locate a teeny weensie reset button that takes a paper clip or pencil point to push it. Sparky took a photo to email the techs. The manufacturer put it in a narrow, 5.75" shelf corner, so narrow you can't stick your head in there to get a good look at it. They COULD have put it in the lower bottom cabinet which is 16" tall and Sparky COULD have had a fighting chance to find the reset switch. NOW WHAT?????

We call in reinforcements. There are NOT a lot of RV repair places in Harlingen that work with slide problems, but we got a guy who seems to know his stuff, and is a Lippert dealer (the company that makes our slide motors/modules.) The company is Fair Mobile RV Repair and Inspection. He started at 12:30 and 4.5 hours later, he had tested the batteries thoroughly, was able to read the error codes on the upside down slide module in the bathroom (he said that's how they are all installed for the big living room slides on our Jayco model!) and said that it was probably a bad motor. (There are two motors for the big living room side). If he gets the one motor off, then we can use the power from the second motor to move one side of the slide and with the guys pushing in on the other side, (the one with the motor out), and that way we will get the slide in.

The motor was THE WORST to try and get it removed from the slide. Someone who doesn't RV asked for clarification about what a slide is. It's the extensions of the rig that slide out when you push a button to extend your living space. Here are two of our 3 slides, the other one is on the other side: 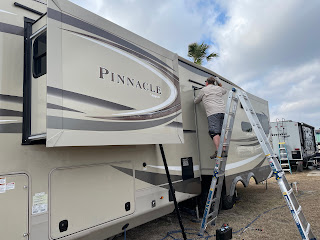 We were frustrated, he was frustrated, and on the phone a lot to Lippert. Finally, it was free and clear after several hours of ominous banging, pounding and sawing. We were nervous wrecks. That should have taken care of the error codes because there was a second motor that operates the slide and it should be ok. Right? WRONG! The error code was still there and exhibiting the same errors. Sigh....By the way....Sparky was not seeing things or missing things when she tried to read the slide module upside down in the 5" deep shelf space. There was NO RESET button as Jayco had said there would be. Apparently, Jayco's customer support reps are not aware that the particular slide mechanism model we have for the living room slide is NOT the same slide model they have specs for at the help center. So no reset button. Geez, Louise...hope they get THAT straightened out soon. Sparky is going to read them the riot act tomorrow. (Now, Sparky, simmer down, cautions Eldo.)

At this point, we all called it a day....The repair guy is coming back tomorrow with fresh information from Lippert (the slide/jacks mechanism company), he's going to study the diagrams and schematics again, talk to Lippert and see if there is anything else we can do to get that slide in. We may be looking at TWO new motors for the slide. Stay tuned for part 2......

Posted by Jeannie and Eldy at 9:14 PM