We've been here three nights in E. Moline, IL...technically, Hampton, IL. at a US Army Corps of Engineer park called Fisherman's Corner (north). We've enjoyed our stay but we are ready to move on. The bike trail portion of the Great River Trail was a little disappointing after such an amazing trail we left behind in Shipshewanna, IN. The roads on this section of the Great River Trail as it's known, wind back and forth between being right along the roadway on a wide sidewalk, to some rural streets along the Mississippi River, thru a city park, and then through an industrial area while you are biking on a levee. The total distance of this trail is about 63 miles, so this is just a small portion around the Hampton area. Sparky has ridden about ten miles of it several times now. There has been a lot of wind damage from a previous storm before we came here, so it probably was a lot prettier in this area before the storm  came. BUT--the trail streets are rough in spots, and they need to work on some maintenance of the trail roads. Sparky really had to watch the rough roads and ingrained worn tire tracks to avoid sidelining her bike.

Sparky discovered that there is the Illiniwek Forest Preserve on a portion of the side of the trail in Hampton, and a TON of prairie grasses and wildflowers growing with short little nature paths to walk thru in that preserve. The state is trying to preserve the natural beauty of the grasses during the time of the European settlements back in the 1800's. If you were a birder, (Sparky is, sort of,) you could spend some time observing and see lots of different species of birds. In this evening's short walk (the paths are but yards in distance), Sparky saw at least a half dozen goldfinches. Her wonderful Nikon Coolpix 900 with the awesome 85X zoom no longer is focusing, so the goldfinch is with an iPhone X. 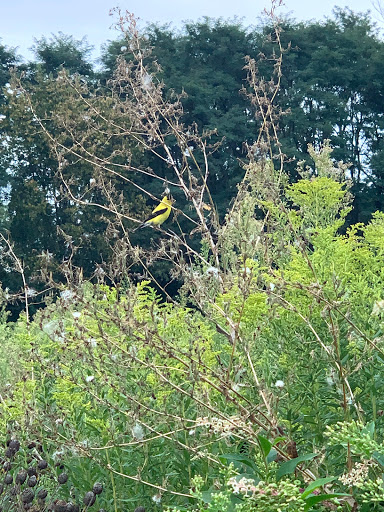 What else is there to see at this U.S. Army Corps of Engineer park? You can see tugs and barges navigating the locks in the distance. There are points of historical interest in the area and information can be gotten at the ticket office to the campground. (You can tell that historical things are not really Sparky's main interest when we go places, explains Eldo. At least, not the minor ones.) As anybody knows who has followed our blog the LAST time we full timed, Sparky's main interests are: 1. Where's the nearest Michaels/JoAnn's/Hobby Lobby? 2. What good restaurants do the locals frequent? 3. Can she hike or bike a trail while we are here?

The campground office has weird hours, by the way. If you come in during the afternoon during the week, the office doesn't open till 5 PM-8PM. Fridays and Saturdays they open for a few hours in the morning, then shut down again until later in the afternoon. Be prepared with knowing your campground site if you have reserved. If not, claim a site that doesn't have any tags on the post, then report to the office later. 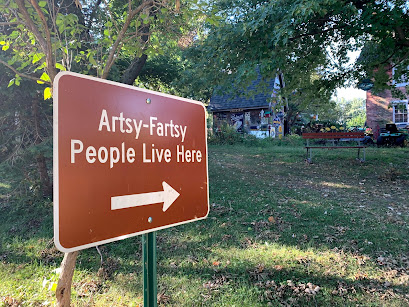 Sparky revisited the "Artsy Fartsy" signpost/house while on the trail again. It's a doozy. More yard art than you can shake a stick at. They live in a huge brick two story house that appears to be falling in major disrepair at the back, like a DIY remodeling project gone majorly wrong. But the yard art is really cool. Lots of bottle trees, garden ephemera, statutes, rusty antique garden equipment, a little whimsical garden vignette.....you get the idea.....Sparky would love to meet these people, they march to the tune of their own drummer, and the neighbors be damned...well, maybe.... 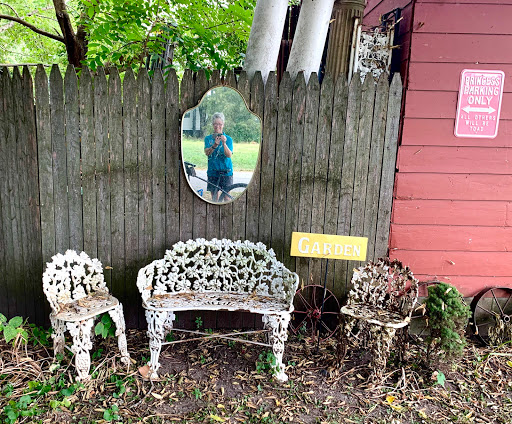 Anything else, Sparky? Hmmmm....Yes! The marsh right behind the Fisherman's Corner North campground on the Mississippi River, 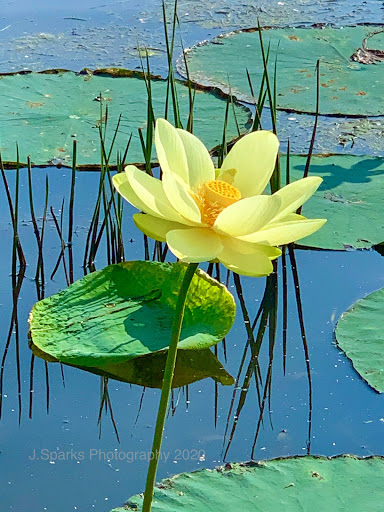 is loaded with lotus flowers. Prime viewing time was probably last month, (July) as the flowers are turning to pods right now. Sparky really likes this shot, taken with her iPhone X and the Camera +2 app.

Tomorrow, we leave for a one night stand in Iowa (all you jokers out there, you can just be quiet! You know who you are!)....Next stop after that is the Corn Palace in Mitchell, South Dakota. See you in a few days.....

Posted by Jeannie and Eldy at 9:42 PM