Before we left the Texas T campground, we decided to do the Jack Daniels Distillery tour in Lynchburg, TN. It was about a 30 mile drive one way from the campground to the distillery, but well worth the drive!

Beautiful Tennessee hills and valleys, so much greenery and trees after living in Florida which is beautiful in its own right, but this Indiana girl misses the forests and lush greenery. We got to Lynchburg right when Jack Daniels opened at 10:00 AM. They had just started the tours up again, the day before, so no crowds and we were the only ones on the tour! There are a couple of different tours, a tasting touring a walking tour. As we are not whiskey drinkers, we took the walking tour, which was 15.00 a person. Because of Covid, there were no inside the building walk throughs except for a couple of videos inside small rooms or walkways, and a trip inside the tasting room where lots and lots of barrels line the walls to the ceiling. 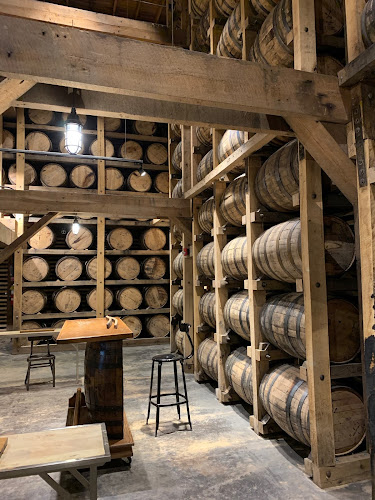 The tour was VERY interesting...some of the things Sparky remembers without taking notes were....Jack Daniels, a real person, was a rare individual for his time. He forged a strong friendship and partnership with an African American named Nathan "Nearest" Green. Nathan was the first African American master distiller. They remained friends and business partners for life.

Jack Daniels whiskey is distributed worldwide and the entire amount is made right there in Lynchburg, TN. which is a DRY county! The whiskey is made uniquely from a process of using their own charcoal made from sugar maple trees and a natural cave spring water, rye, barley, and corn, and a unique mellowing method. Every single bottle is made from the cave spring water. The recipe hasn't changed since Jack Daniels first started making it back in 1866. The whiskey is matured in uninsulated buildings. In summer, warm weather forces whiskey into the cracks into the barrels, and in winter, the whiskey contracts back into the barrel. This is how it gets the color and flavor. They wait FOUR YEARS. A TASTE tester checks the whiskey, if it's not ready, back it goes for more time. It gets tested again at ages 5 and 6 years. (Wouldn't you like to have THAT job? asks Eldo.) Maximum maturation time is 8 years. Before it is barreled, the whiskey is filtered through 10 FEET of sugar maple charcoal, kind of like a Brita water filter pitcher. The charcoal is made from pallets soaked in unaged whiskey and then burned to make the charcoal.

The barrels are very cool...cured sugar maple as we said, and an experienced barrel maker can make up to 250 barrels a day! Each barrel is used only one time, then recycled. You can buy a barrel of whiskey for $10,000 a pop. Anybody who buys their own barrel gets their name engraved in a special tasting room at the distillery. The biggest spenders? Members of the military.

It's the only distillery in the world that has its own fire department.

Jack died from kicking his safe with his foot. True story! He injured his foot when he got made because he couldn't remember the combination to his safe one morning. The toe got infected, and they had to amputate it. They couldn't get rid of the infection, so he then had his foot cut off. The infection continued to rage, and he lost his leg up to the hip. He died from complications of the last infection of blood poisoning at 61.

The tour guides are excellent, the visitors' center is beautiful, and so are the grounds. If you didn't want to take the tours, the visitor center alone gives you tons of information.....We highly recommend this tour!

The town of Lynchburg is a cute little town...just a little town square with lots of Jack Daniels memorabilia and cute little shops selling the usual variety of tee shirts, handicrafts, and ice cream. Hope you enjoyed this tour of the Jack Daniels Distillery. We found it fascinating.

Posted by Jeannie and Eldy at 6:07 PM