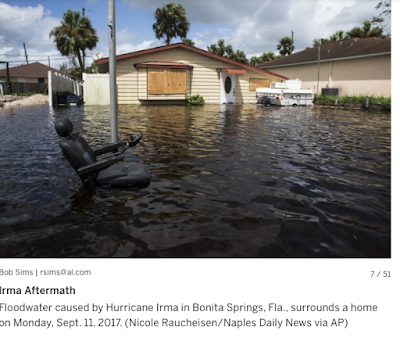 Monday morning.....we awoke....turned on the news and Irma was passed Bradenton...It had blown through, rather slowly at a less than category 1 storm...winds gusting from 45-90 mph. Sparky had a website called Next Door, where neighborhoods can set up a little private network of their own for neighbors to check on neighbors. You can request information about the best service people to use, what companies are good, and one of the best requests, "We are out of town, but how does our house look after the storm?" Because it's just your neighborhood and neighbors, it seems like a safe site to use. Sparky sent out a request, and a neighbor walking her dog was kind enough to report back, "Your pool cage has a branch through the screen, but it's just a small hole. Everything else looks ok!" Whew! Dodged a bullet there! It could have been really bad...the southern part got hit much harder than we did. 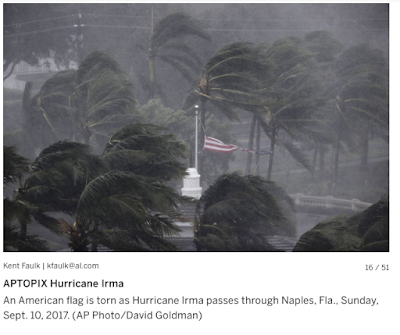 Sparky was anxious to get back home. Eldo, not so much. He was thinking, "Why not just stay here in Myrtle Beach, play a little golf, and wait for all the hubbub to die down?" But he knew how much Sparky missed school and the little kids, and how much she wanted to get back as soon as possible, just in case school resumed quickly. So we left late Monday morning. With no decision made on school other than it was closed Monday and Tuesday, Sparky was ready to go. There was just one slight problem. The outer bands of the hurricane were scheduled to pass through South Carolina close to the time we would be making our way back in the direction of Florida. Let's see what happened....

We drove and drove and drove....through bands of strong winds and heavy heavy rain. Just when we thought it was a bad idea to have headed home, the winds would calm down and the rain would completely stop. We kept going. Things started to get a little alarming once we got into Georgia. All the ramps were closed getting off I-95 through Georgia. We didn't know why....Apparently, the exits were closed due to the exodus of people leaving Florida, and the hurricane headed northwest tracking through Georgia and they hadn't opened back up yet. As the night deepened, the highway remained extremely dark. There were no overhead lamps illuminating the exits, there were no lights to be seen along the exits, where the gas stations, convenience stores and restaurants were. There were no gas stations open. There were no restaurants open. NOTHING was open. The area was without power. Uh-oh...we started worrying about gas, hearing that gas supplies were available. There was no electricity for miles and miles. We had kept our tank filled and topped off after having a terrible time getting gas once we were in the southern part of South Carolina. We started seeing lines and lines at the gas pumps and the gas pumps were closed off. We realized this was going to be a problem the rest of the way home.

Once we hit the border of Florida and Georgia, we were wiped out. It was about midnight. We pulled off the I-95 exit and interchange at I-75 in Wildwood, FL, deciding to see if we could find a place to spend the night and finish the drive the next morning. The most surreal scene greeted us. (Sorry for no photos, time of day and sheer exhaustion caused us to go into survival mode). Picture this...a major interchange with cars strewn all over the place in and around the gas stations....People sleeping in their cars in gas lines, lines of cars 25 or more deep, waiting for gas deliveries the stations said would be coming by morning. People sitting on the tops of their cars, parked willy-nilly all over in parking lots, on hillsides, like a demolition derby had just taken place and everyone had climbed out of their cars to wait the rest of the night out or choosing to sleep in them. People with children and babies trying to get some sleep, wondering where and when the gas would come. Others walking aimlessly around, talking to strangers. There was a motel right there, a Days Inn. A sign on the door said, "Sold Out" and it was locked. Sparky had to go to the bathroom, BAD! So she knocked on the door. The night clerk motioned to a little side window and Sparky explained her need. Sure, said the lady, and unlocked the door to let her in. After Sparky used the bathroom, she asked if she and Eldo could park the car in the back of the motel and just rest for a few hours. The lady took one look at Eldy, head down in the car and said, "Actually, we have a handicapped room still available. Would you like that one?" and Sparky WANTED  to say, "DOES A BEAR SHIT IN THE WOODS????" but she mustered up an effusive, "OH, YES! We WOULD! Bless you! Thank you SO MUCH" And we took it. Guess they were holding the room for anyone handicapped. At midnight, it had not been claimed, so we took it. They could have charged us an arm and a leg for it under the circumstances, but it was 116.00. That was all right. it was doable. Eldo climbed into bed and within 5 minutes was snoring logs. Sparky had her shower, and then she collapsed, too.

At 5:00 AM, we were back up and ready to roll. The thought of making it home on a low tank of gas was worrisome, but we had enough to make it. We headed for the highway entrance ramp for 75 south which had a line of 50+ cars in it at a dead stop. Nobody was moving. We couldn't figure out why until we saw a cop directing people AROUND the line of cars and it turned out the ramp was blocked because people were in a gas line that wrapped around the corner from the highway. We suspected that some people might have run out of gas in that line, but we didn't know for sure. We had to do a U-turn and come back the other way to get on the highway. As we got on I-75, there were cars after cars after cars on the shoulder. They had all run out of gas. We arrived home at 7:00 AM or so, and saw that the gas pumps were all out of gas in and around our exit as well....Unreal.....We have never experienced that nor seen anything like this ever!  We are old enough to remember gas rationing back in the early 70's but this was a lot worse....


And wouldn't you know....school was cancelled for the rest of the week! Sparky owes Eldo, BIG time! :-) As we recovered from our ordeal, many emotions hit us the first couple of days back from having evacuated. Sparky was very emotional and tried to figure out why....(she's normally calm as a cucumber and very little gets her upset). Having missed a terrible storm, seeing others be not as fortunate, makes you feel guilty a bit. The Florida Keys got hammered. We felt terrible at the losses some RVing friends suffered from the damages to the Keys. 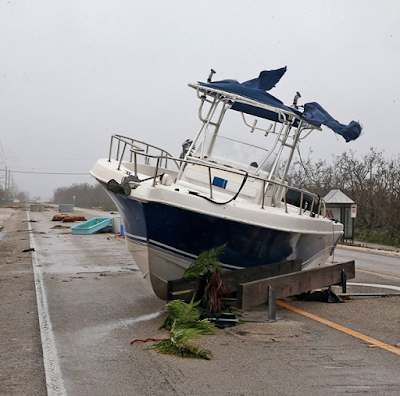 It was really really stressful....It took time to calm down and get back to normal, whatever that was and is...We learned some things about hurricanes in the process and being ready for the next one. We are not sure if we would stay or go the next time, but we do know how to prepare and how to be ready. We don't think we would stay in a shelter. There were some real horror stories about how people treated the shelter facilities in Sarasota. People left dirty diapers in children's desks in some of the schools that served as shelters. There was animal feces and other awful junk left behind. 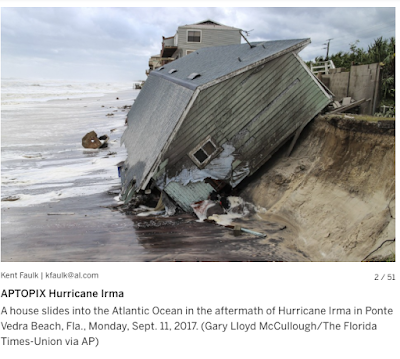 We aren't blasé any more. We have a much more personal connection now with the weather here in Florida. We will have better supplies on hand next time. We will keep a "go" bag ready and packed a few days prior to having to evacuate if we do. We saw the power of a tropical storm, almost hurricane force winds, and we have a greater respect for the power it does have. It's been a busy hurricane season this year, THREE in the Atlantic basin at one time, Katia, Jose and Irma, something our weatherman says he has never seen. However, we are blessed to be in a location that has VERY few hurricanes actually come into the area. We are not worried. BUT--we will think about some new windows and we really should think about a new roof!

Until next time.....(not hurricane time!)