What Floridians Do on a Balmy Night....

Well...some of us anyway...Sparky was at the store the other night picking up a few things, so she thought she'd call home and see if Eldo needed anything. She WAS going to get him ice cream from Culver's for a dessert treat and was on her way there.  "No, can't really think of---OH MY GOD! THERE'S AN ALLIGATOR WALKING THROUGH OUR BACKYARD!!! yells Eldy on the phone.

"GET A PICTURE, TAKE A PICTURE, GET YOUR PHONE OUT THERE AND TAKE A PICTURE!" Sparky hollers back and hangs up fast. And she boogies home as quickly and as safely as she can, damn the ice cream, a gator is walking through our backyard! 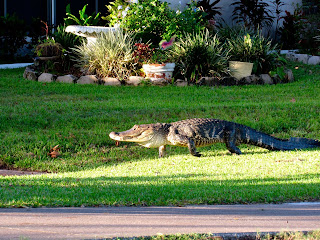 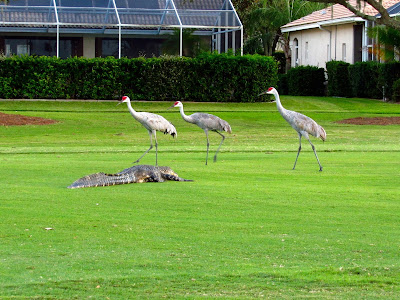 Now, alligators are common in our neighborhood. We see them all the time---in PONDS, with their heads above water...We see them on the pond riverbanks in the neighborhood occasionally. Most of the time if they see you coming, they skedaddle right back into the water. We have NEVER seen one walk through the back yard in the four and a half years we have lived in Bradenton. There is no pond that is very close to the house, although one pond is halfway down our street. So to see a good sized gator waltzing down the golf course fairway and sauntering through people's back yards is something new. This one was about 8 feet long and he had a company of three sandhill cranes with him. The cranes appeared to be protective of him. Sparky was at first walking towards the cranes and the gator, and they promptly went into a warning dance, jumping up and down, flapping their weeks and making a racket. They were close to the gator and he wasn't interested. He looked like he had had a recent big meal, his belly and throat were distended and full. She didn't know if they were warning to stay away from the gator, or they were just alarmed at Sparky being on the scene. The cranes  in our neighborhood are quite tame and will come up very close to you if they think you might have food. Sparky and Eldy quickly hopped on the golf cart and started following the gator. 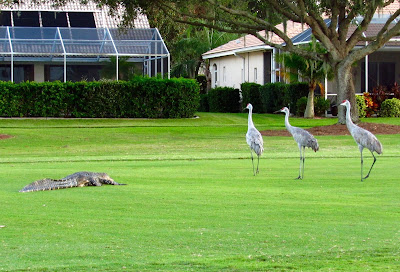 Sparky was texting a neighbor friend and told her about the gator. The neighbor was eager to see a gator, as she hadn't seen hardly any since she moved here earlier this year. Eldy graciously hopped off the cart so the neighbor could come along for the ride. Sparky went and picked her up on the golf cart. She was so excited! Sparky says, "Wanna get closer?" And game friend that she is, "SURE!" So we did. And then, "HE'S UP WALKING! OMG, OMG!"  She was SO excited to see this! 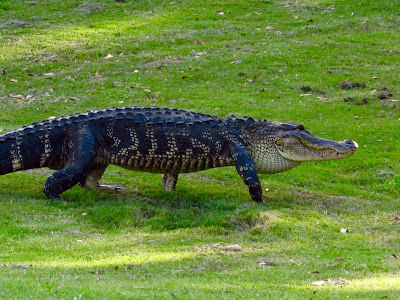 We picked up a second neighbor and continued to follow at a safe distance. The gator headed for the sand trap and then plunked down for a rest. 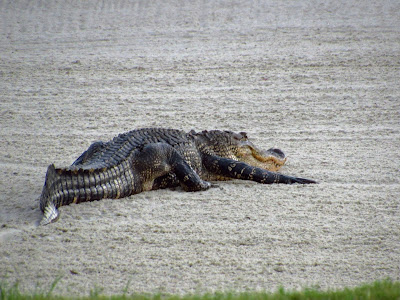 Can you imagine hitting your ball into a sand trap and then coming up over the crest of the hill to see the alligator in the trap?  Don't think anybody would go after their ball, do you? :-) With him deciding to take a rest, and it starting to get dark, we headed back to our house, just a few doors away...... 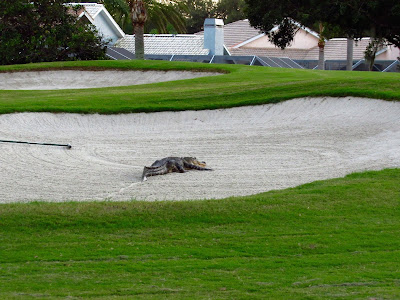 It was a fun way to end the day...and interesting to see the cranes' behavior and how close they stayed to the gator as he walked down the fairway.

Posted by Jeannie and Eldy at 2:19 PM

Email ThisBlogThis!Share to TwitterShare to FacebookShare to Pinterest
Labels: alligator at our house, alligator in Tara subdivision, gator on the golf course, gator watching