We arrived late last night, all we had time to do was grab a late supper at Route 66, a fun, 50's diner in downtown Bar Harbor. There is a TON of memorabilia in this restaurant, and it's really fun to look around while you wait for your food. 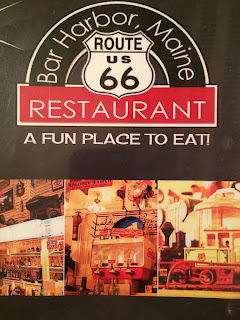 Sparky had a bowl of really good clam chowder...Eldy had a burger which was equally delicious. And  then we spent a little bit of time checking out the antiques on display in the restaurant. 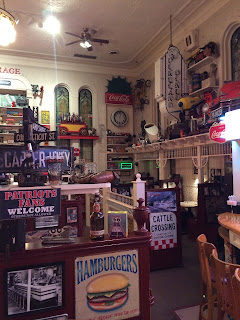 But, they were getting ready to close so we bundled ourselves up to go back into the rainy night back to our hotel....The temperatures for the week were looking like highs in the fifties to low sixties and rain was forecast for the next day...What to do on a rainy day in Bar Harbor? Drive the Park Loop Road to reacquaint ourselves with Acadia, one of Sparky's top national parks! The next morning, that's what we did....But first--had to eat breakfast at "Jeannie's Great Maine Breakfast"...Sparky really likes that restaurant, as their name is the same as her first name. She keeps hoping that they will offer her a discount for having the same name spelled the same way, but nope......Good food, a little more pricey for breakfast, there are cheaper places in town, but that's a tourist town for you. And the food is very good.

It was a slow steady rain, not too hard that Sparky couldn't get out and take some photos of the blooming lupines, most of which are purple in the park, but can be spotted in white and pink, sometimes, too....These were taken with an iPhone 5S. 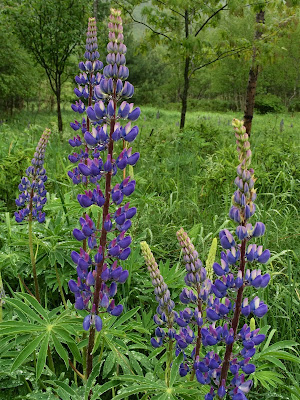 We stopped at Thunder Hole, which if you get there at 3/4 tide on the day of a threatening storm or just after, Sparky is not sure which, you could see a TERRIFIC display of saltwater spray and booming sound, as the water comes rushing into a very narrow channel with a cutout hole on the side which causes the boom sound-- very little of which was happening today..... 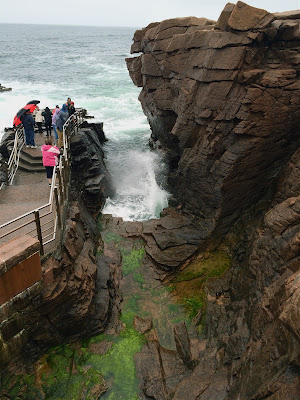 On to Cobblestone Beach.... A very cool little beach where there is no sand, just cobblestones, and the water makes a delightful tinkling, clattering sound as the waves rush in and roll out at the beach. Sparky did a little movie on her iPhone of the sound of the waves clattering over the stones, but it didn't transfer to the blog....Darn! 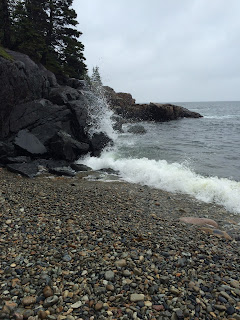 The rest of the day, we took it easy, the rain continued to come down all day, more of the same tomorrow, possibly...That's ok, it is SO refreshing! Everybody is wearing heavy jackets, hats, and even gloves! Sparky is really loving the cooler temps! But somebody wishes it would warm up just a little.....(Uh, that would be me, says E.) Tomorrow, if the rain eases up, Sparky is going to rent a bike and ride the carriage trails!  See you later......