Oh, the Places We Go! How About Alaska?

Sparky and Eldo were getting cabin fever....It's hot in Sarasota now, and the summer muggy season is here. Eldo especially was getting antsy.....He started looking....and looking, and looking..."How about a cruise?" he asks one day...."How about one? Are you finding some good deals?" responded Sparky.

"Yep...How would you like to go to Alaska?" was the million dollar question Eldo came up with.
"HOW WOULD I LIKE TO GO TO ALASKA?" shouted an excited Sparky. "OF COURSE I'd like to go to Alaska!!!!!" That's only been on her bucket list for years and years. Thought it was way too expensive and pretty much had chalked it up to reading about it in other people's blogs. WELL! Eldy, the master researcher, came up with airfare, a BALCONY cabin and all expenses paid there and back, for 1500.00 a person....THAT was terrific and doable! And a fantastic early birthday present for Sparky whose birthday is in July. Next question, "How soon can you be ready to leave?"   "Uh, how about in two days?" Sparky says excitedly. So, he booked it three days before the ship left....He booked through Holland America, on the "Oosterdam", (christened in 2003) and the trip was called the "Glacier Discovery Northbound". Here is our itinerary. 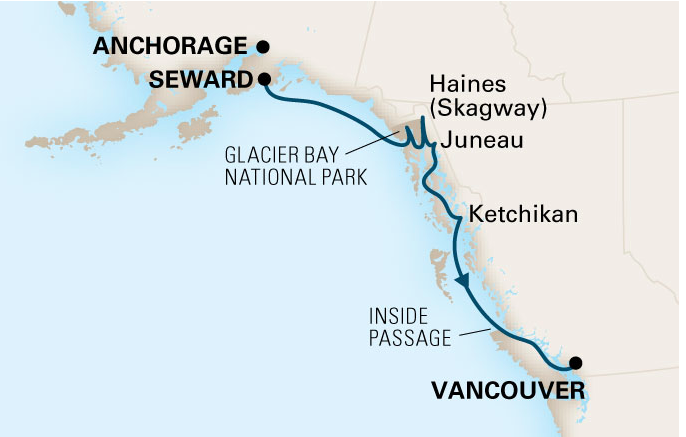 We were going to see three ports--Ketchikan, Skagway, and Juneau, and then a stop in Glacier Bay to see the glaciers! Sparky was SO EXCITED!  She was going to get to be in cooler weather! Woo hoo! We packed and were on our way! 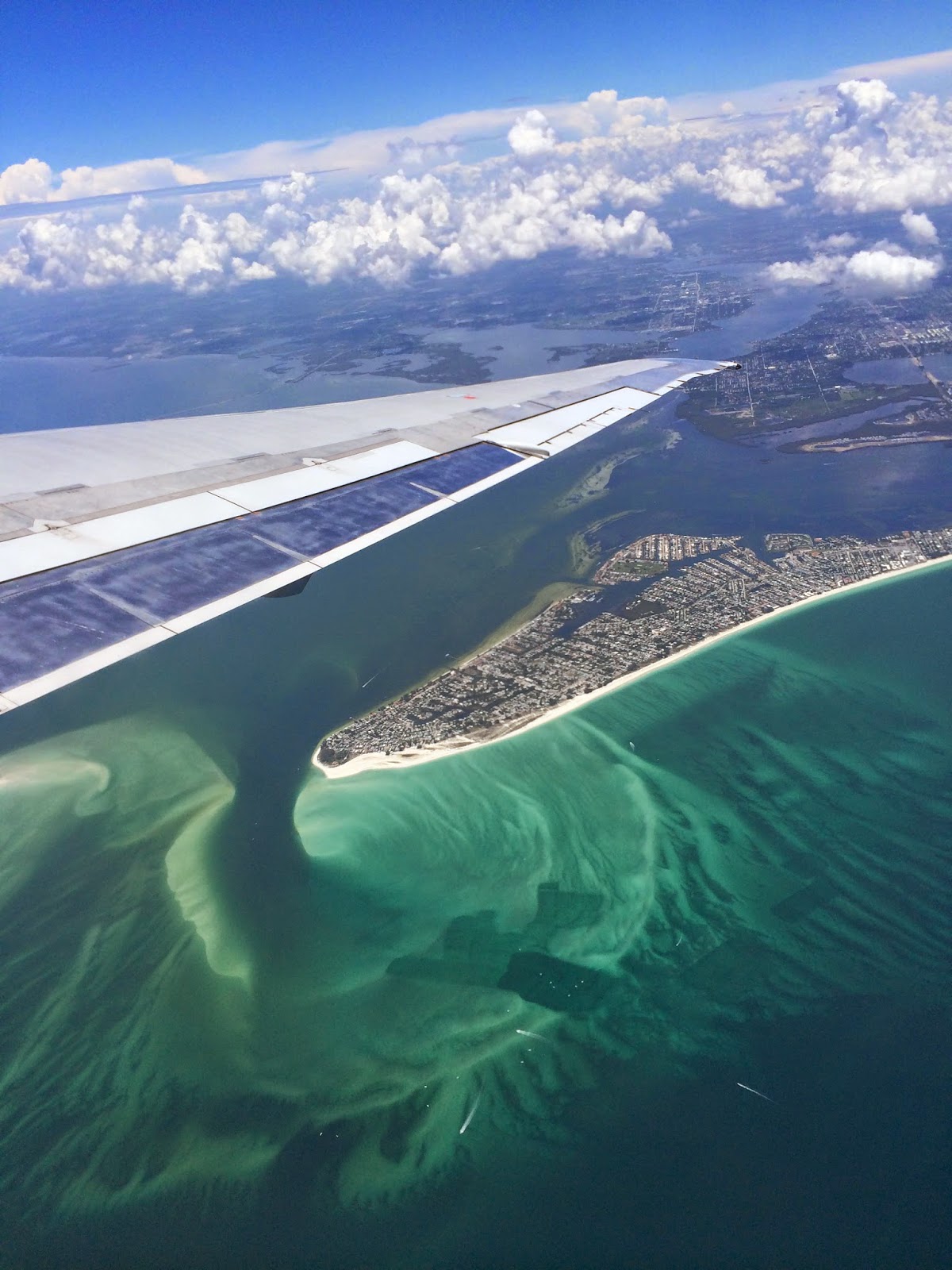 We flew from Tampa to Vancouver....Sparky loves looking out the window and seeing the changing landscapes as you fly over the country. The above photo is as we are leaving Florida. Isn't it gorgeous from above? And then, later, the mountains take your breath away.... 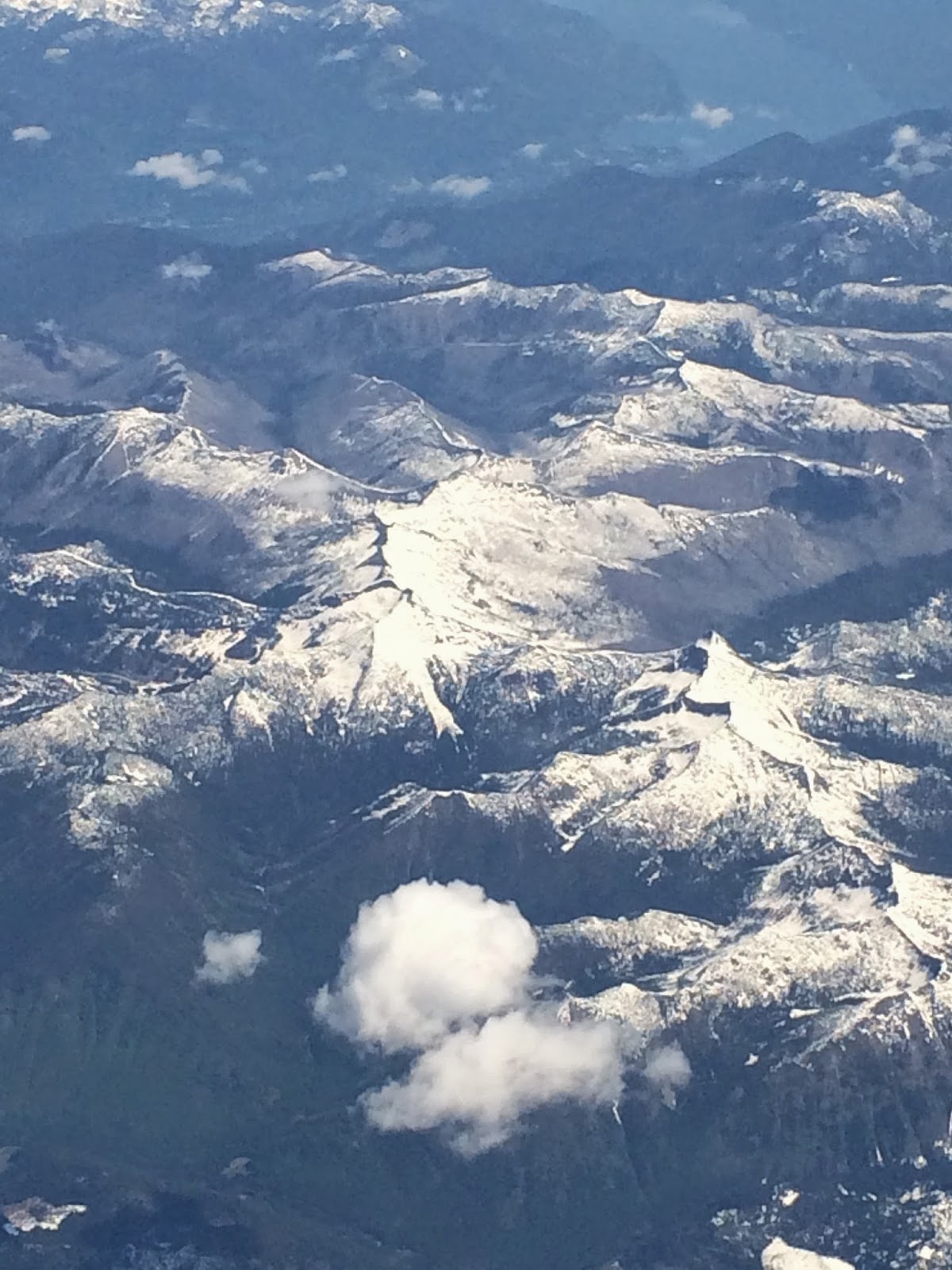 The cheapest flight Eldo found was a United flight to Tampa with a stop in Chicago, then Chicago to Vancouver...Sparky doesn't mind layovers at all, as long as they aren't the fast, get to the next gate in less than 10 minutes kind! She LOVES to people watch..... 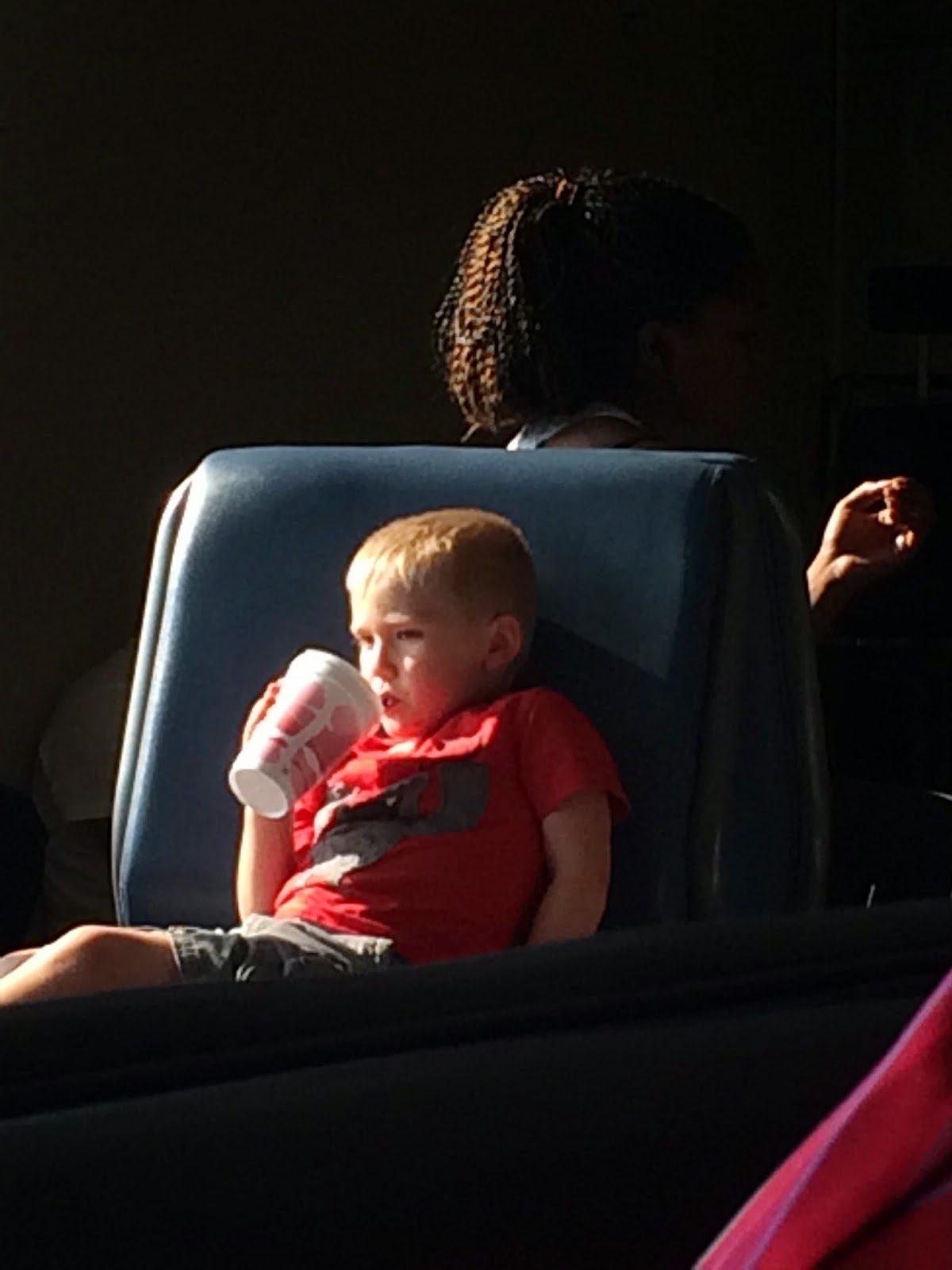 Once we got to Vancouver, the ship lines had taken our suitcases directly to the ship. All we needed to do was find transportation to the dock. We took a train from the airport right to Waterfront Station to the docks, which was a lot cheaper than taking a taxi. It was 6.75 each as opposed to $45.00 for a taxi. We boarded the "Oosterdam".

The Oosterdam was a nice ship, although it appeared to be a little dated and needed some fixing up...the patio door curtain was dirty, the toilet seat finish was coming off, and the shower curtain was threadbare at the bottom. Minor stuff...The ship had some beautiful areas to it--the atrium/bar area.... 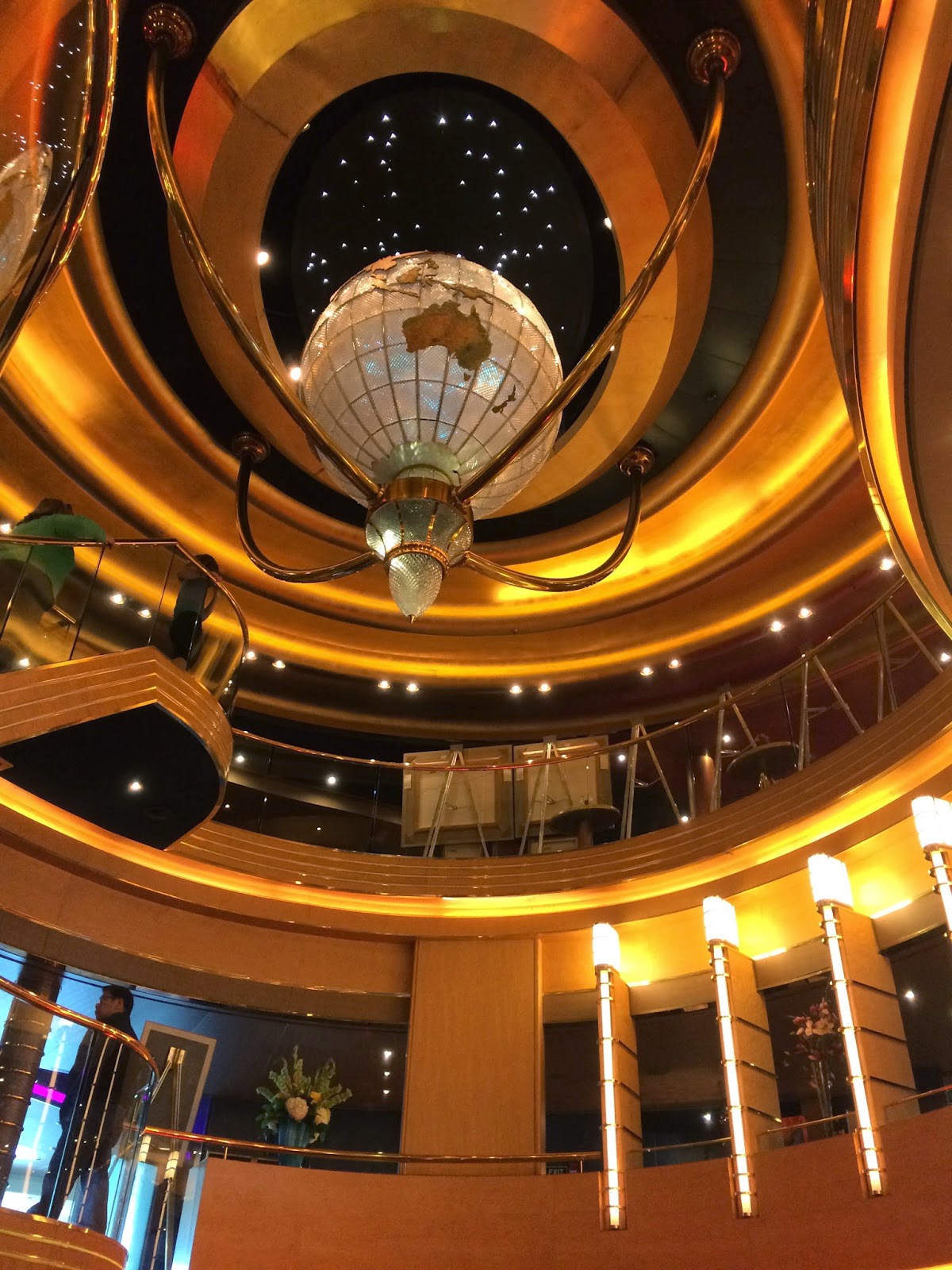 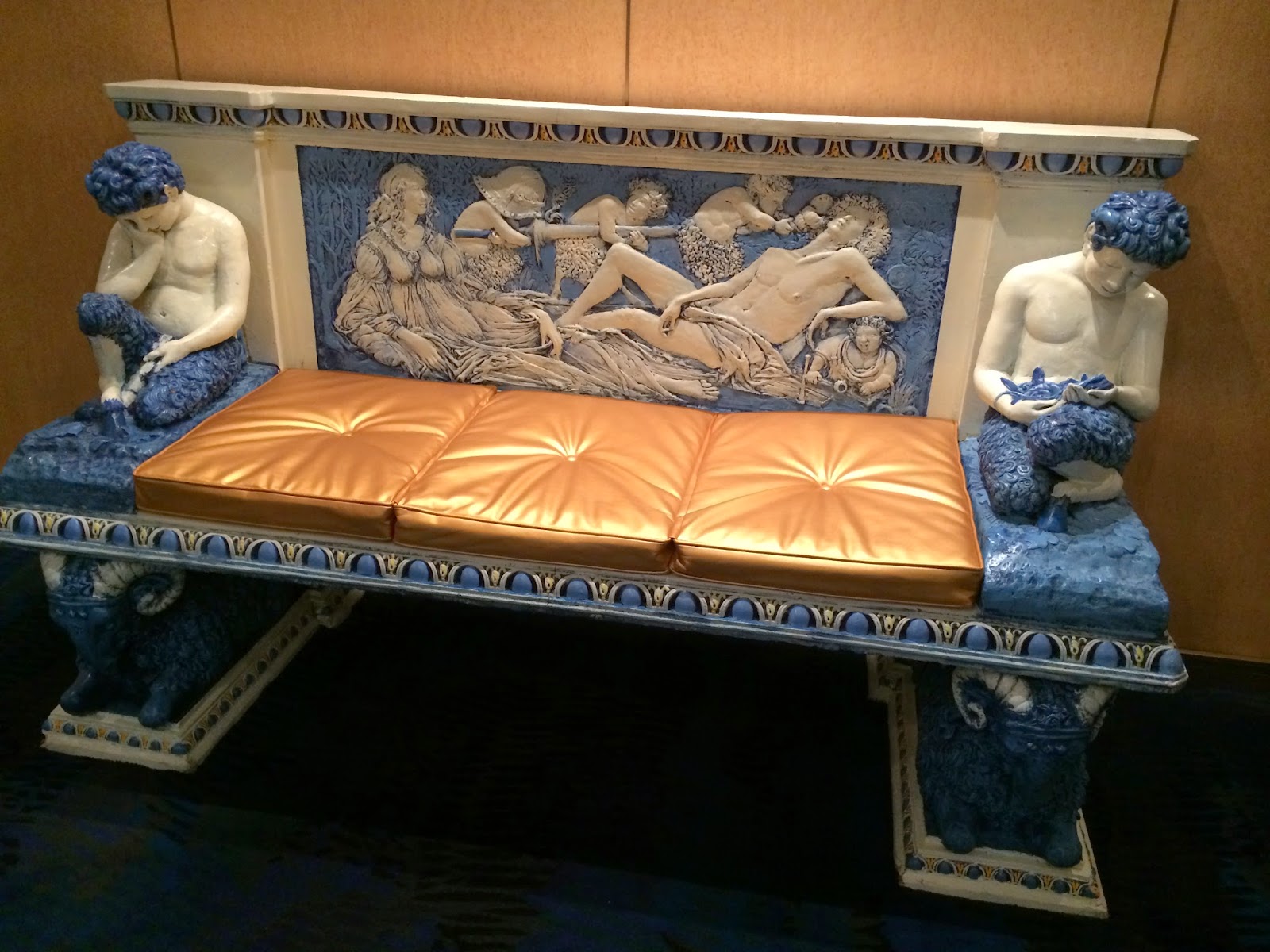 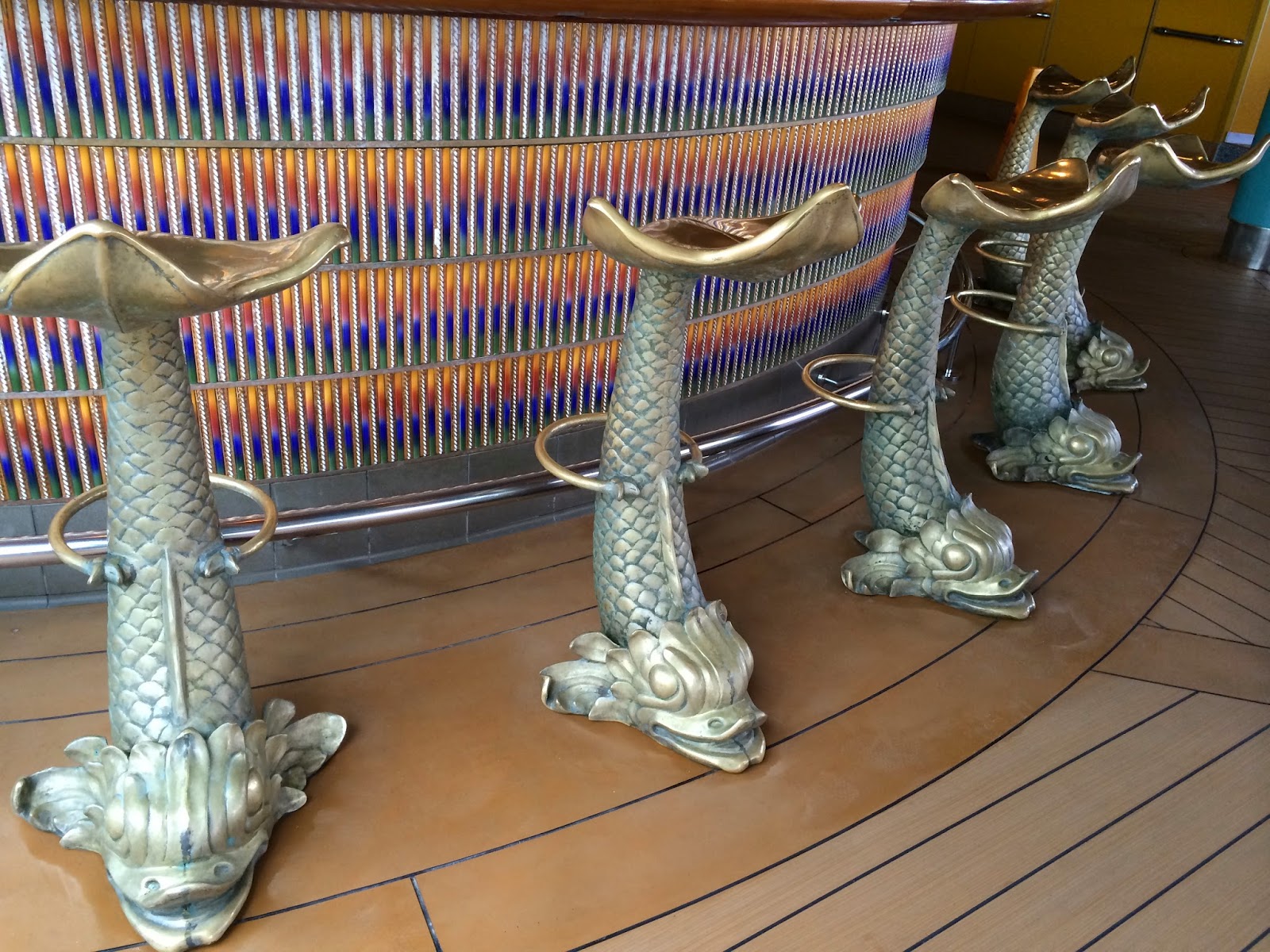 Nice outdoor pool and hot tub...As we traveled further north, these were not used as much. 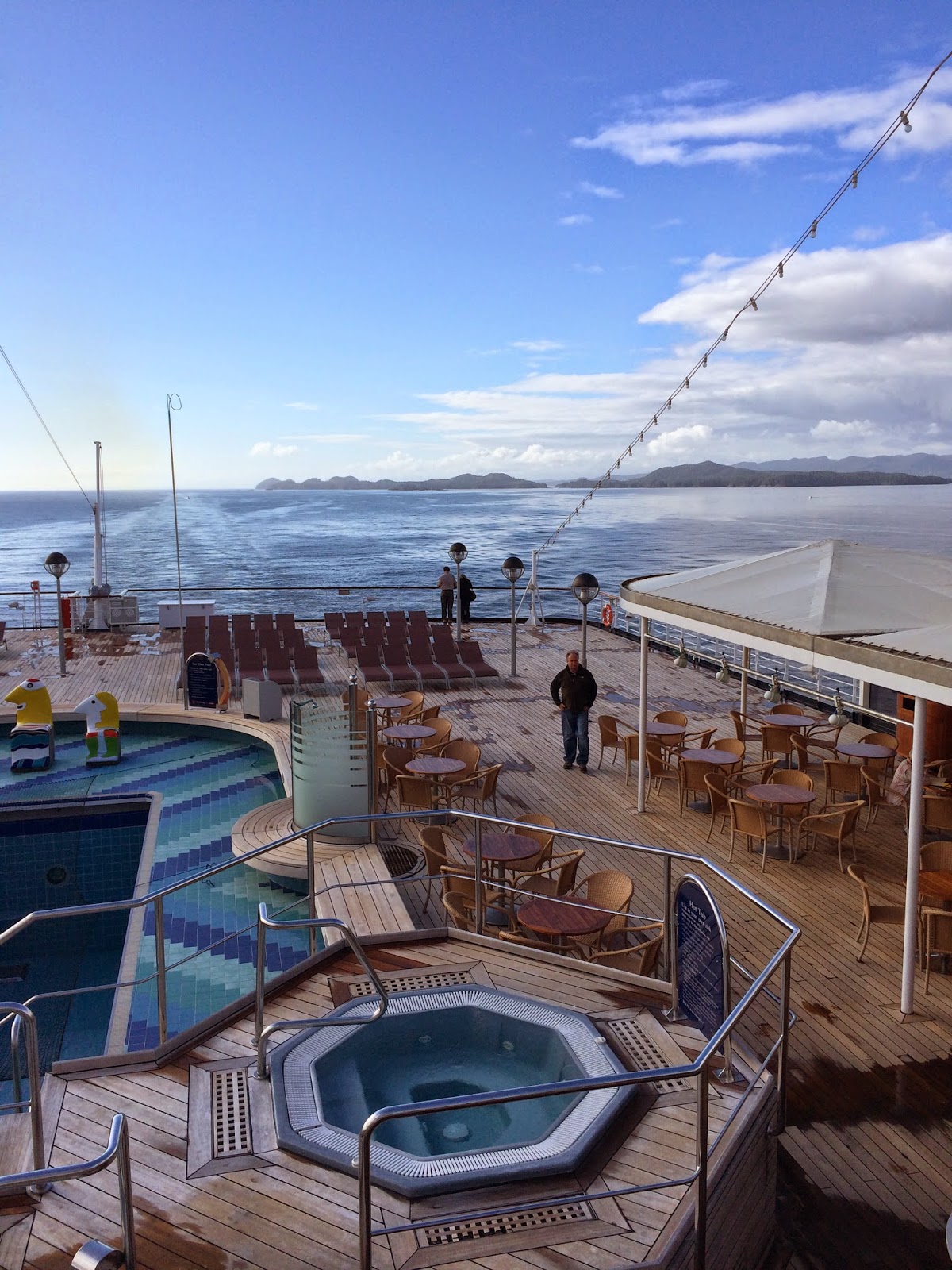 The indoor pool had a retractible cover to let in fresh air and sunshine or to keep out the cold and rain as we traveled further north. 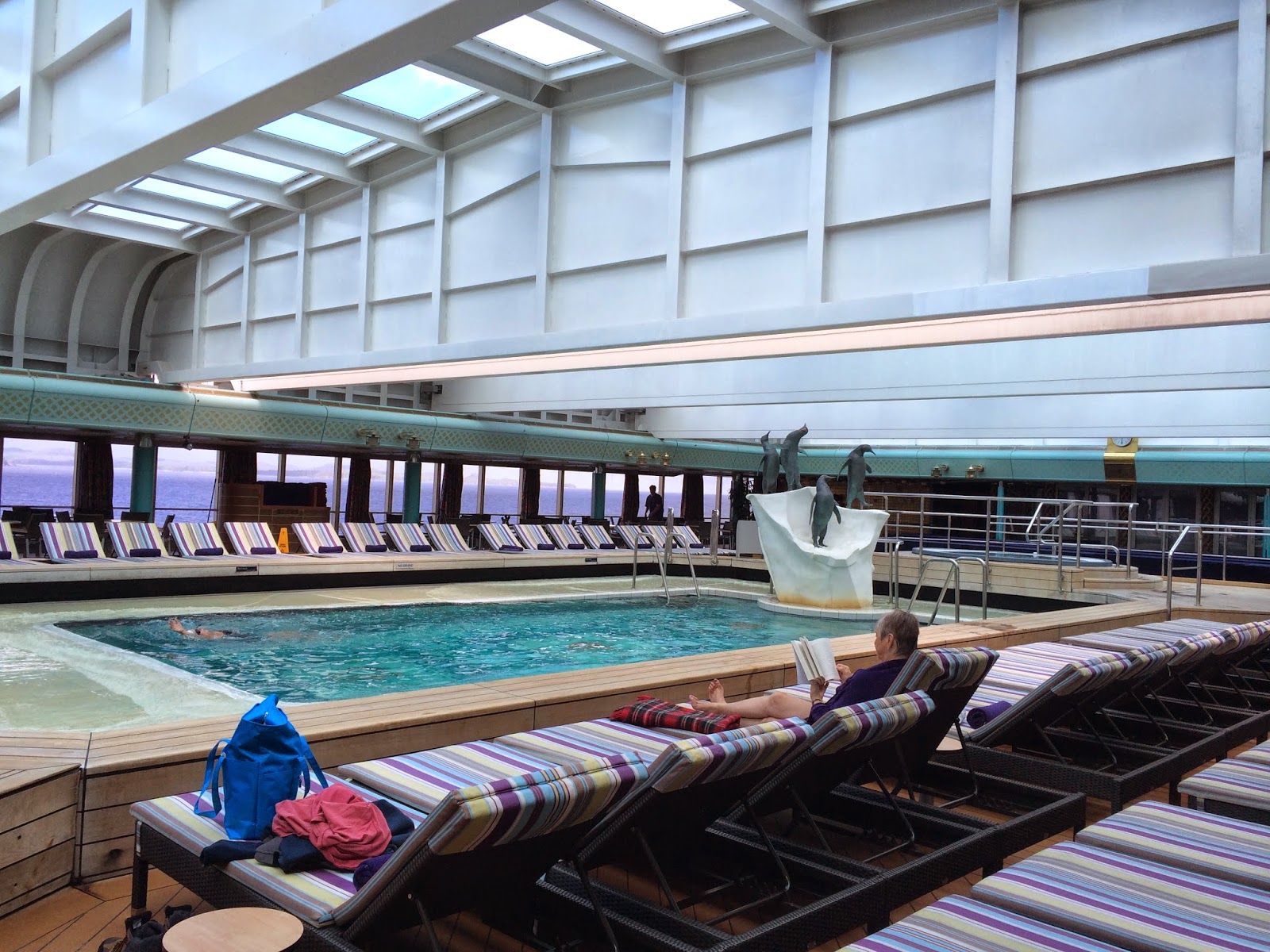 Even the elevators were something else! 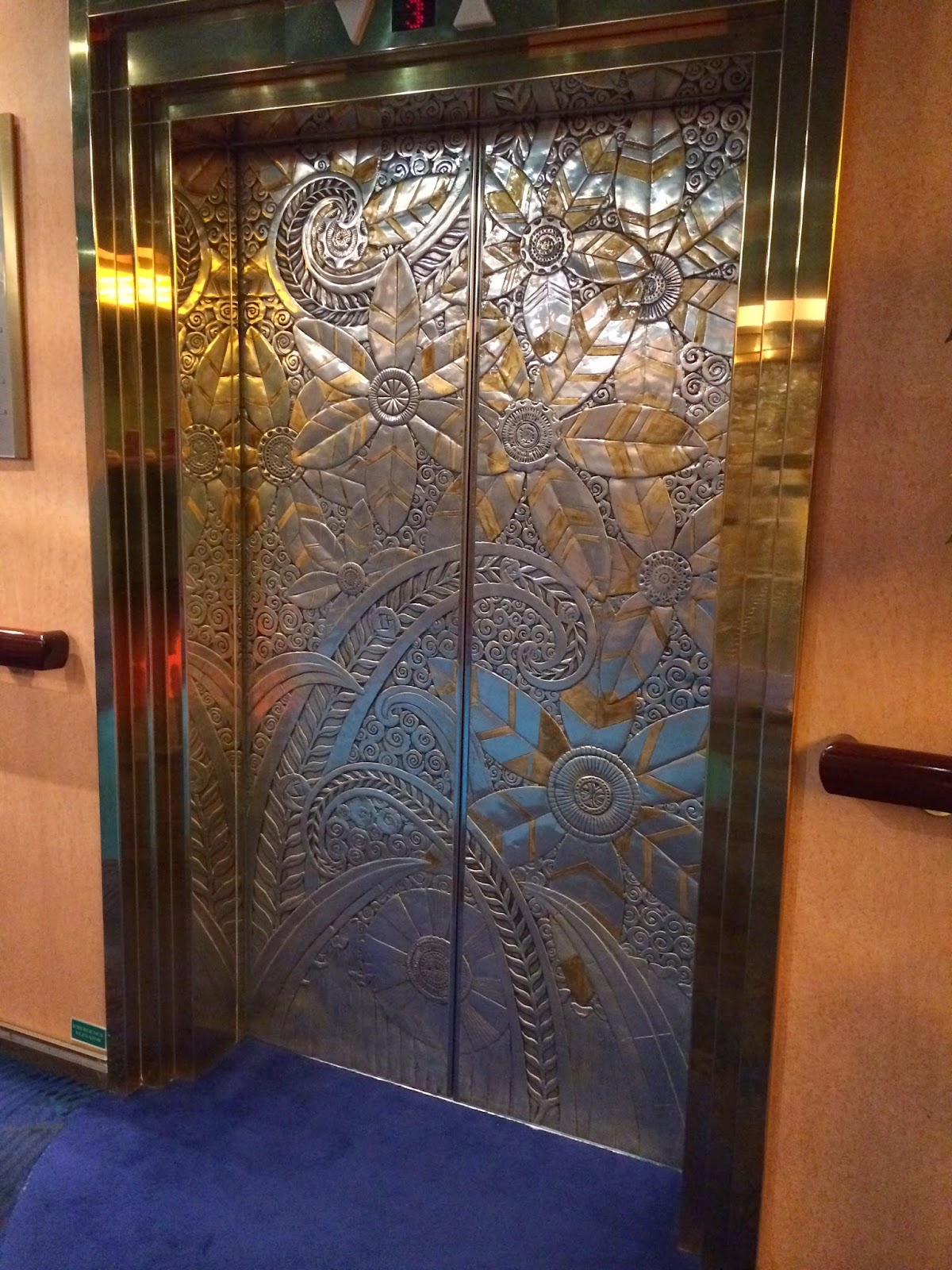 Beautiful floors....You hated to walk on them! 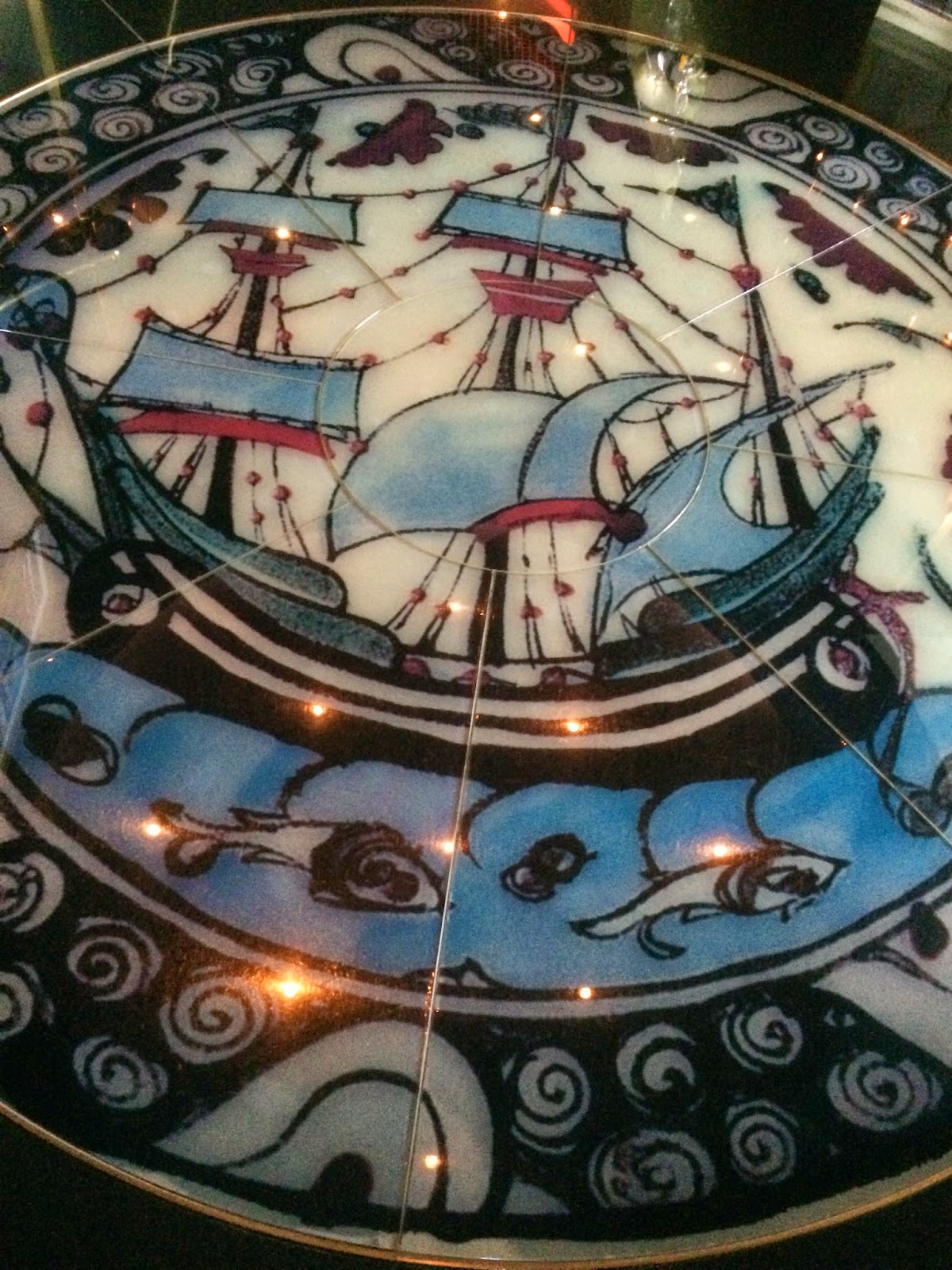 The staff was EXCEPTIONAL---very friendly, the service was amazing! And the best part? The food! Sparky is here to report that the food was----FABULOUS! It was EXCELLENT! Every day, it was wonderful!  Since we booked at the last minute, we did not have assigned seating like you do on some cruises. We could eat whenever we decided, whether we wanted to head to the buffet or the dining room. Every day the food was excellent.

One thing we noticed is that there weren't as many on board activities to choose from on this trip. The highlights of the ports and the glaciers perhaps took precedence over offering more onboard things to do. Exercise classes were expensive---12.00 per class, so Sparky abstained from doing any. She walked the ship decks a few times in the brisk air instead. Temperatures steadily dropped  as we traveled....Most of the time it stayed right around in the high fifties at sea, and low sixties in port. It sure felt great! 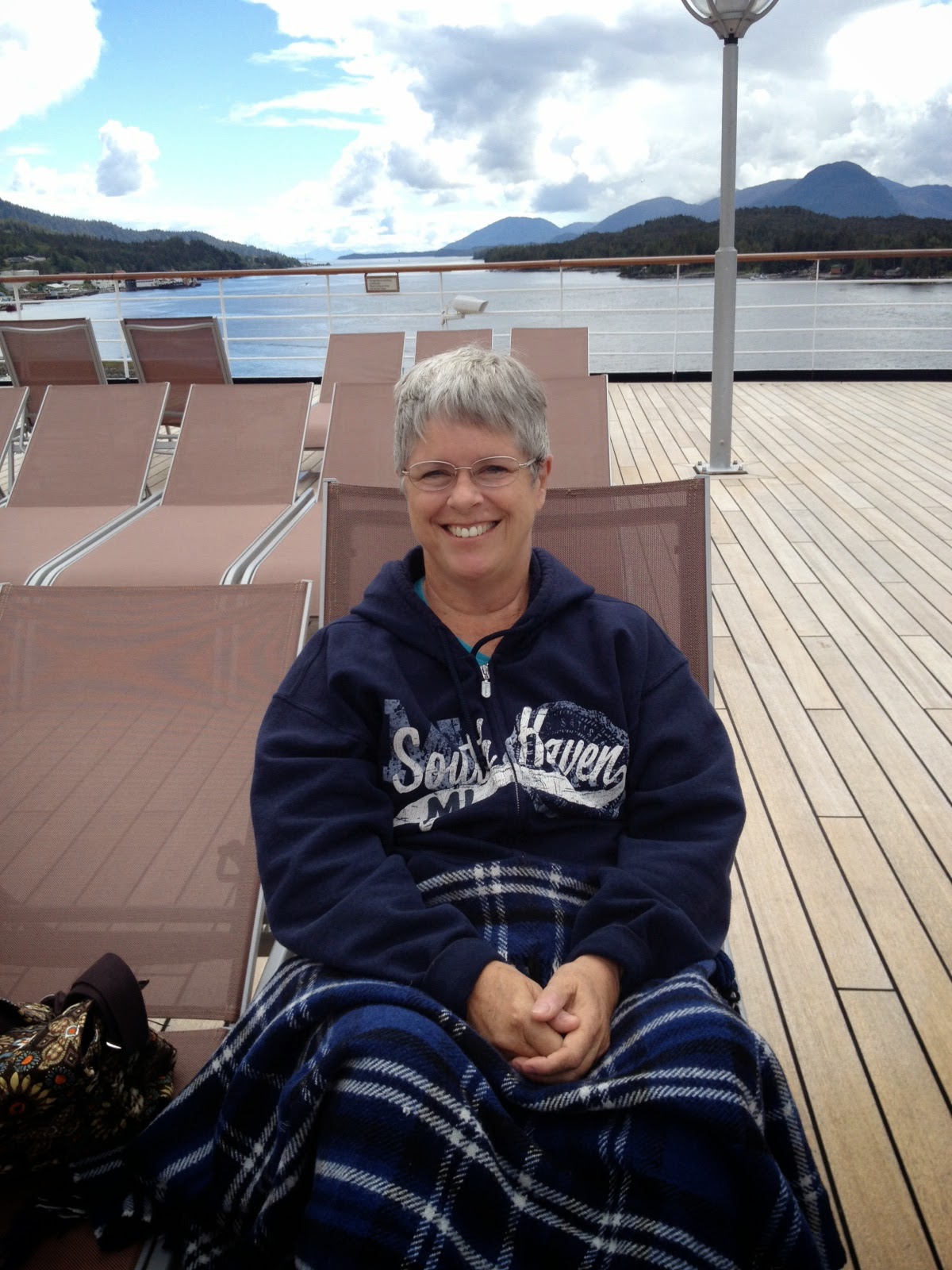 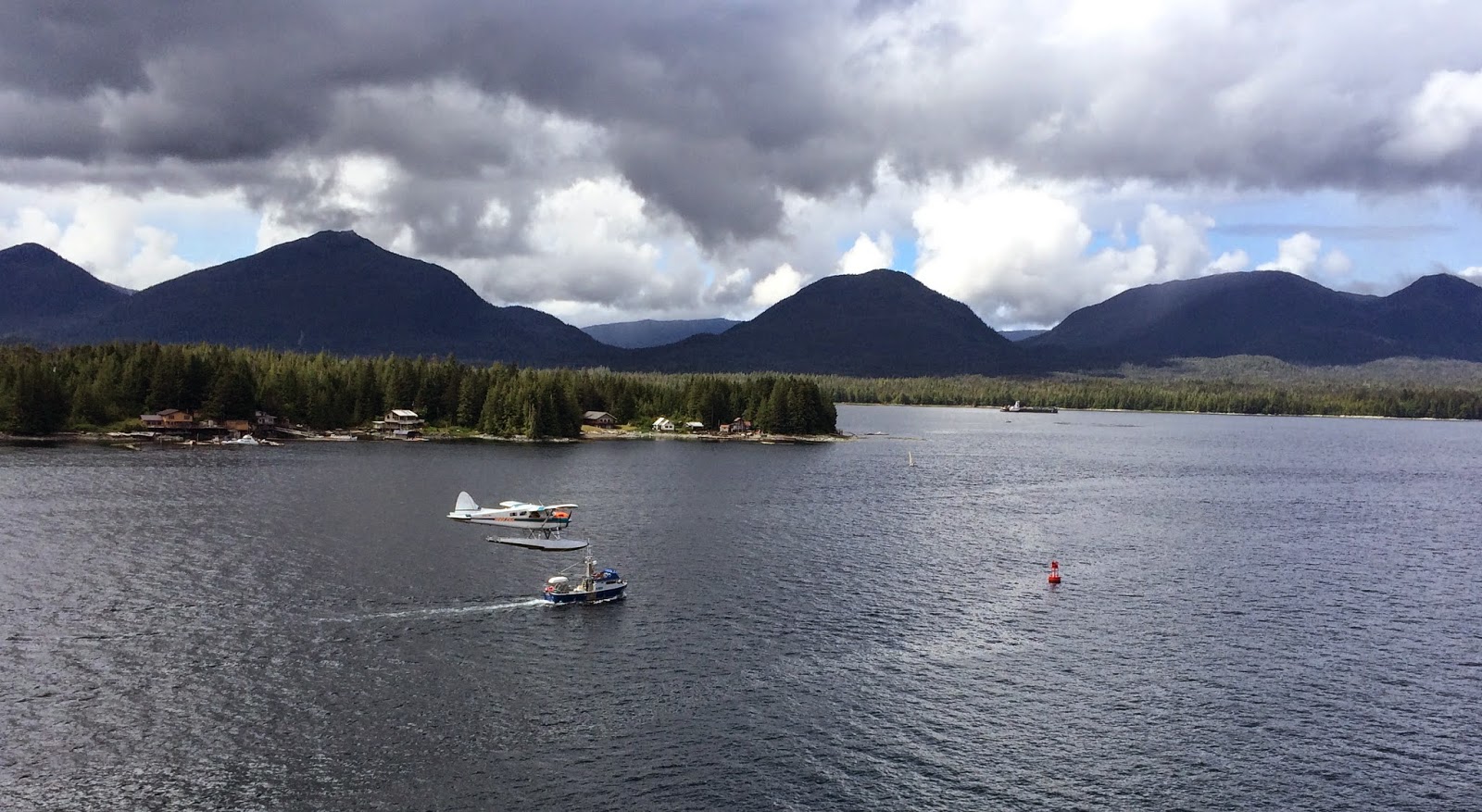 Lots of seaplanes, of course. Someone told us that 1 in 20 people living in Alaska need one to get around. We believe it!

See you in Ketchikan, our first port in a couple of days....Sparky is spreading out the Alaskan blog just a bit. It takes awhile to sum up the best parts and choose the best photos from a wonderful experience!

Posted by Jeannie and Eldy at 9:00 AM