A Shimmy Mob? Count Eldo In!

"Hey, El, did you see the shimmy mob/belly dancing event advertised in the paper for the Nokomis Beach drum circle Saturday night?"

So we went…It was not quite what we thought it would be. A large group of belly dancers, around 30 or more, wearing purple "Shimmy Mob" tee shirts showed up to perform, and the usual cast of characters at the Siesta Key drum circle showed up to promote World Belly Dancing Day. There was the "Jester", a retired school teacher…. 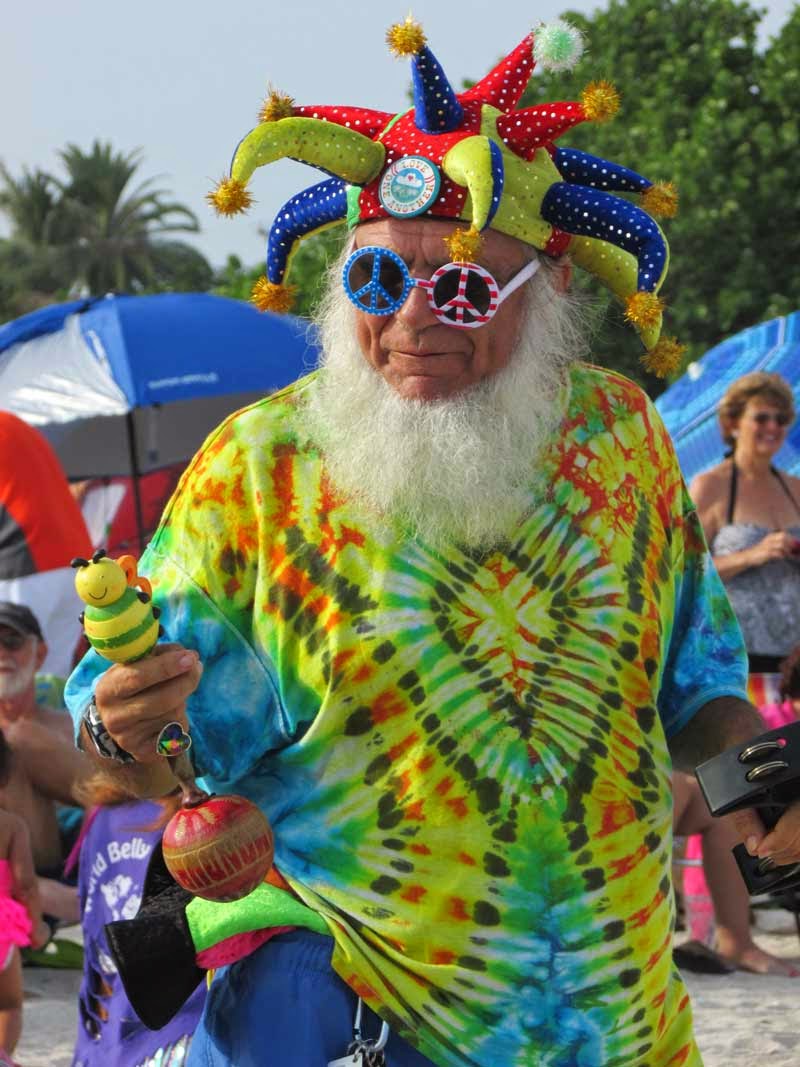 There was the "Shaman" as we like to call him, the guy with the cream colored bowler hat who has a terrific physique for his age who does the "blessing" ritual of getting the dancing circle ready….and the scarf lady, all previously showcased in previous drum circle blogs…Tonight, it had sort of a lackluster feel to it. The shaman didn't do nearly as much incantation as he normally does, and the jester removed himself to the outside of the circle entirely and watched the rest of the proceedings from up in the lifeguard tower after a brief exhortation to watch the sun set which doesn't really set, as he explained, moving around the circle attempting to educate the crowd.

There were PLENTY of people there all right…. 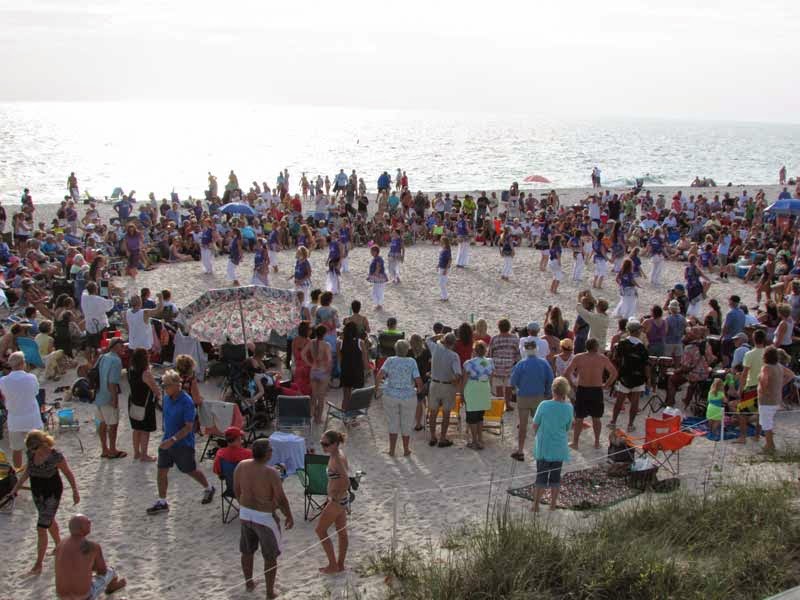 But the belly dancing was just ONE group dance, where the dancers were performing the same choreographed dance in 165 cities all over the country at the same time, 6:30 PM… The dancers were there to raise money for women's shelters, a wonderful cause. 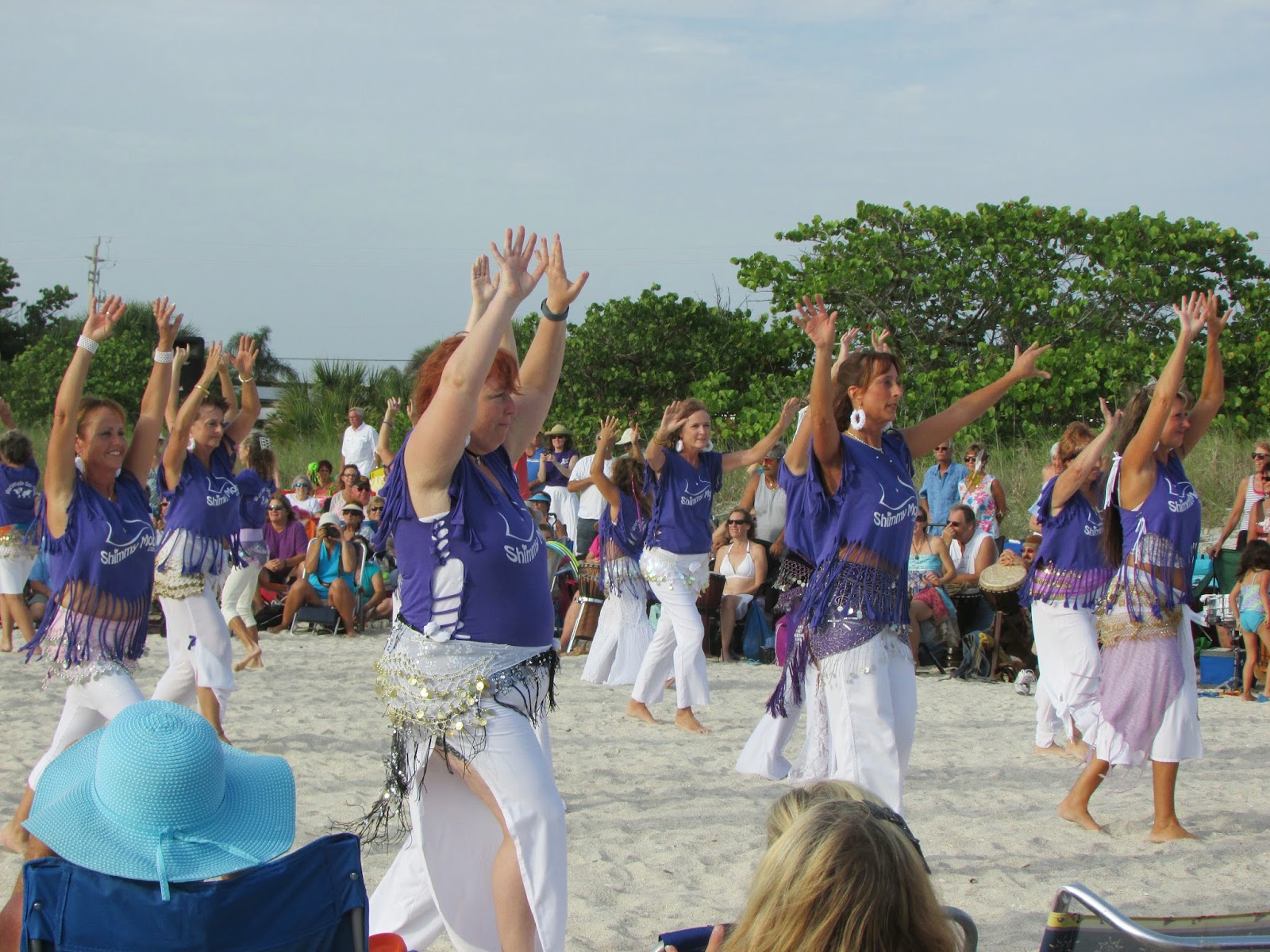 After they finished, they were done, and the usual throng of people clogged up the center circle standing around talking to each other and taking photos of the drummers. The wonderful hoop dancers that use to come last year and the year before were not there, and the people who love to dance in their exotic costumes and really get down to the beat weren't there. We feel lucky that we've seen some really really cool drum circles over the past couple of years. Guess the word has gotten out on how cool they were and although the throngs of people show up each time, the performers are few and far between now. Part of that we think is due to the lack of etiquette shown by the bystanders. There's a reason a large circle is drawn. Bystanders are supposed to stay on the outside of the circle and let the performers do their thing on the inside of the circle. There's no room for them to do their hoop magic, for the scarf/sword lady to do her dancing to the beat, so the really interesting skilled performers seem to be staying away for now…..

Sparky went down to the water's edge for a little while to watch the skimboard surfers do their thing in the good waves curling into the beach. One of the guys did a 360 degree turnarounds on their board in these little waves. They were quite good and fun to watch! 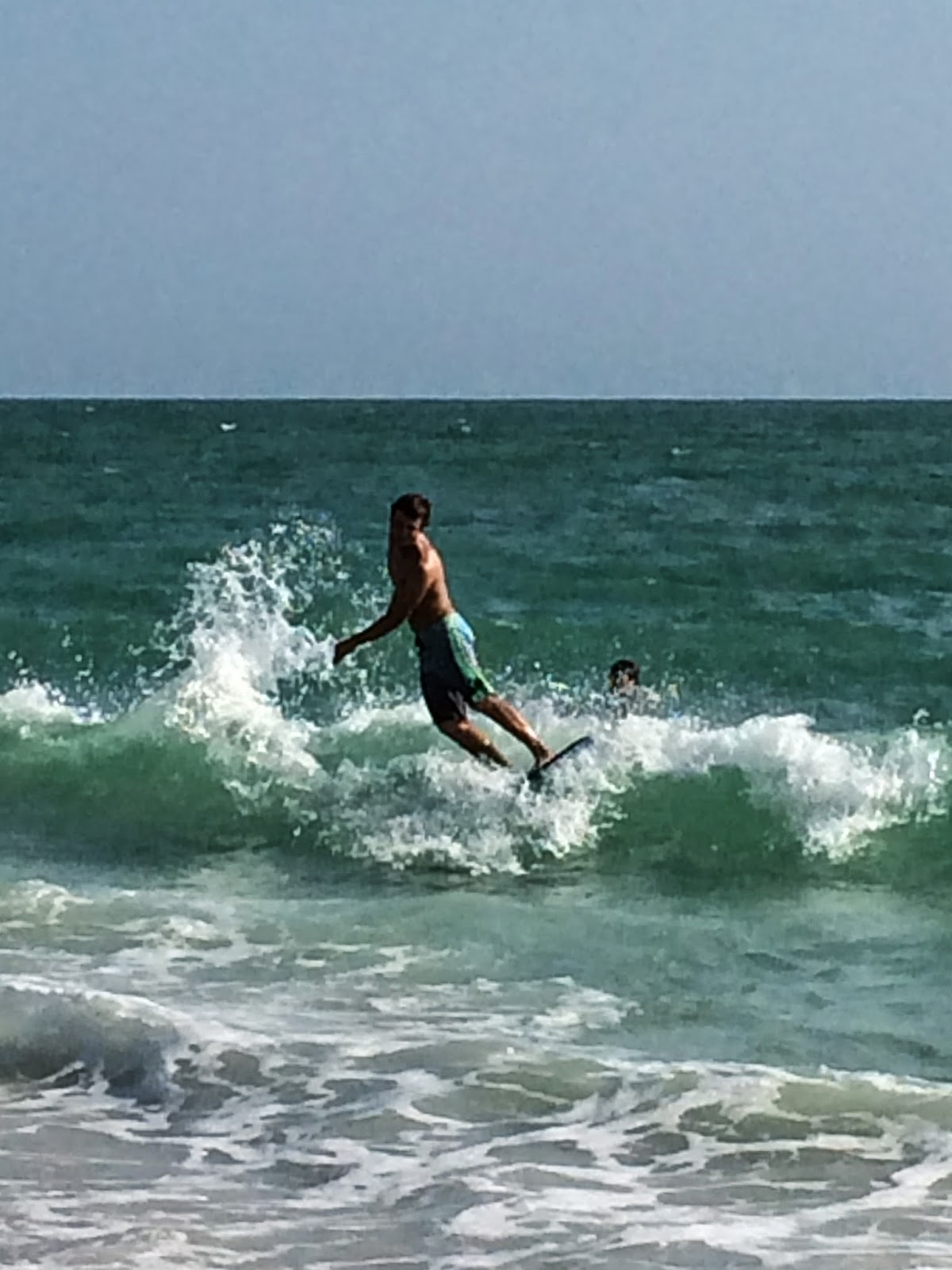 We didn't want to stay any longer at the drum circle so we headed over to the North and South Jetty at Venice, not too far away….Good sightings there, but not the belly dancing kind….(Sigh, says E.)
A lone dolphin swimming out and away from the jetty…….A great blue heron waiting for leftovers….. 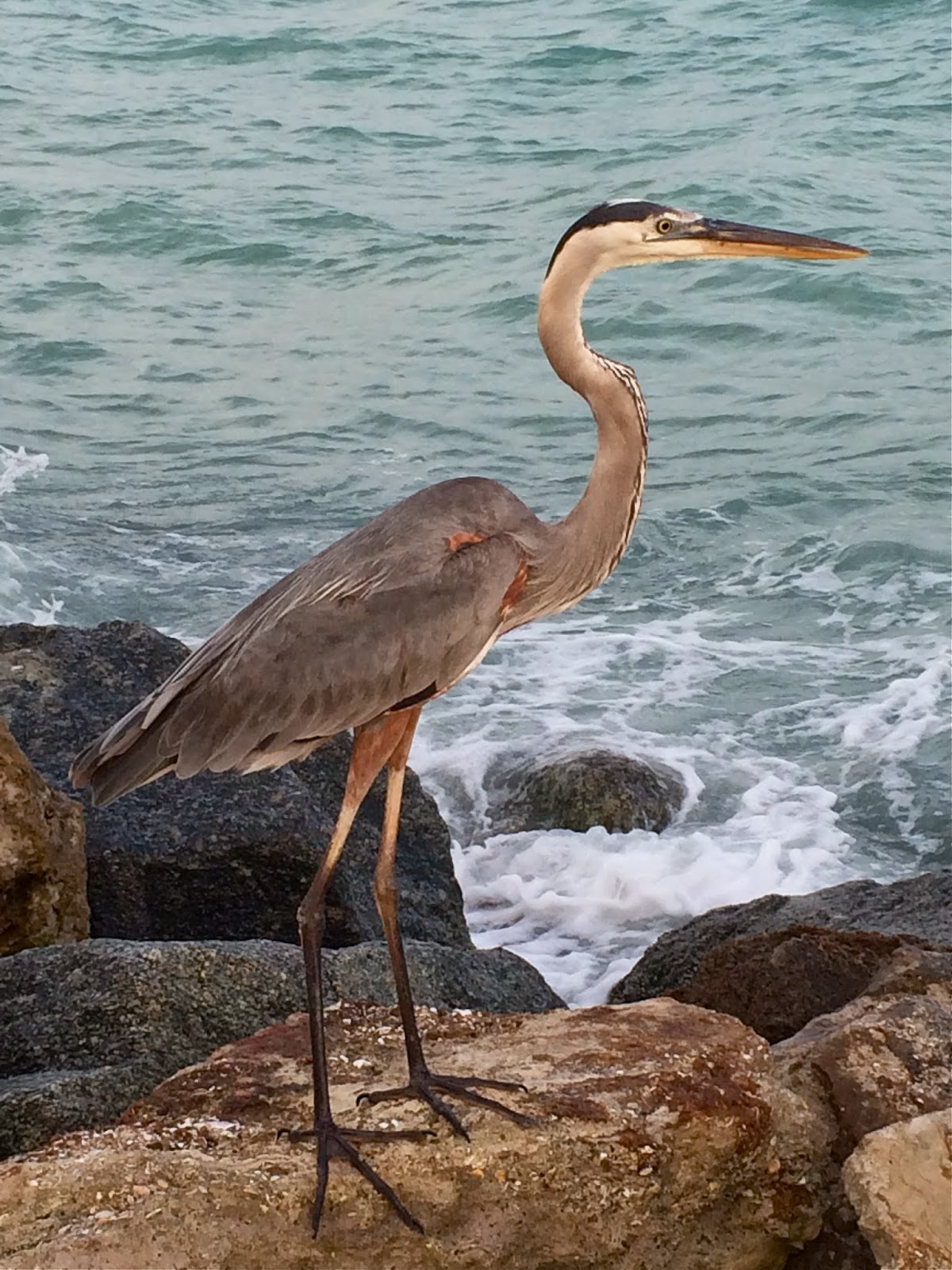 A fisherman hoping for a catch of some sort…. 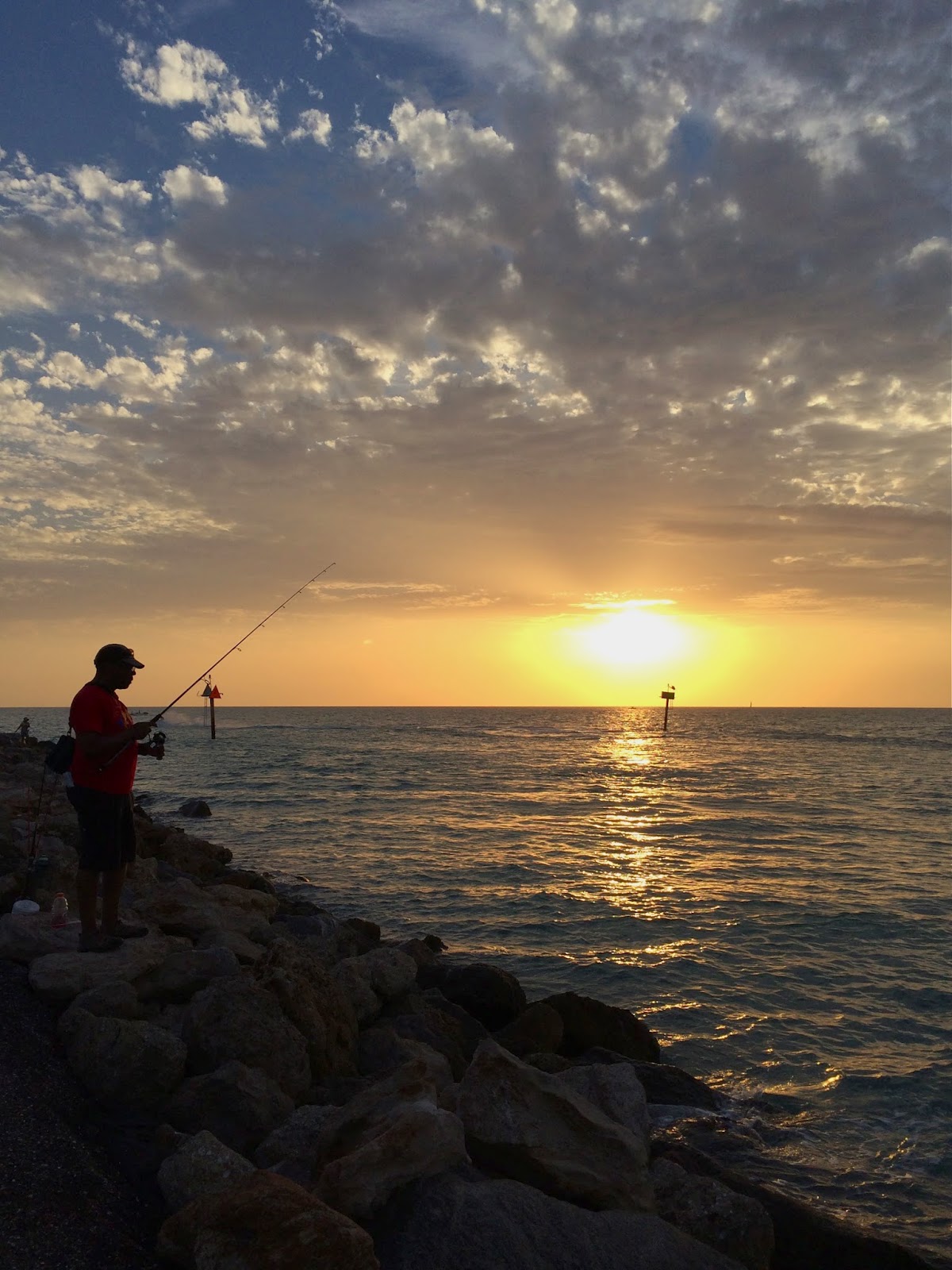