All Fired Up to Kayak and No Where to Go….Sea Eagle Woes

Sparky thought she would kayak the Braden River this weekend.  Nice temps, not too hot, so down to the landing she went, Jiggs Landing, about a half mile from her house. Normally, it takes about 8 minutes to inflate the kayak, fasten the seat in, throw in the necessary supplies and set out on the water.

But something wasn't quite right…Sparky was distracted, (no surprise there, laughs E.) and after inflating one side of the kayak and then the other, she went to the car to get the rest of her stuff---food, water, paddle, etc. She came back and darned if one side of the kayak wasn't inflated. Hm-m-mmm…must have forgotten to push the valve stem up so it would hold air or something like that. She pumped it up again. Went to pick up her paddle, which was laying on the ground, looked back at the kayak, and the one side was deflated again.

What the heck??!!!!!  Sparky examined the kayak closely. Pumped it up again, and this time, watched the side chamber slowly deflate again. She couldn't hear any air leaking, so examined the sides very closely…..

AHA! One of the side seams had a portion of the seam completely open.  There was at least a six inch seam opening. WEIRD! The glue looked like it had completely dissolved in the one section. The rest of the seam was firmly and solidly attached. Sparky has pushed up the kayak skin so the gap can be REALLY seen! 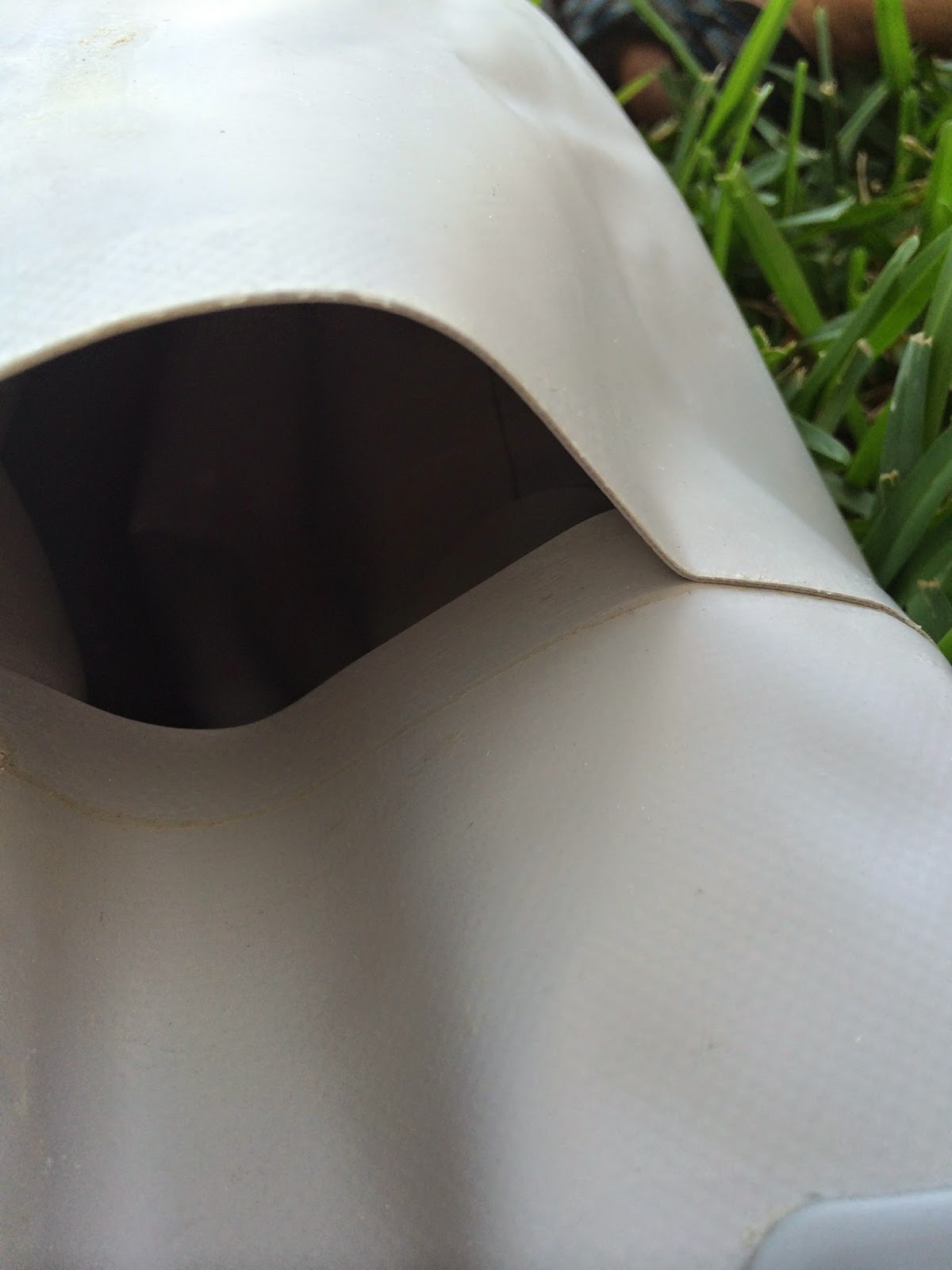 Sparky was VERY upset!!! But at least the opening was easily seen NOW and discovered BEFORE getting out on the river, which has alligators in it, aggressive ones this time of year.  Sparky COULD have gone kayaking with a SLO-O-W leak, and lost air out on the water. Could have been much worse…..

Back home she went…She decided to call Inflatable Boats 4 Less, which is a company that is a distributor for Sea Eagle, and the company she had purchased the kayak from two years ago. Sparky had a blog about sitting on the porch at the RV park in the keys, waiting for her kayak to come back then. That boat has seen a LOT of action since then, but not so much since we settled in Bradenton. No matter….Tim and Crystal, the owners of Inflatable Boats 4 Less, were very surprised that the seam opened up, they said that was very unusual. They asked for photos to be sent, and they researched the purchase date. Sparky was very happy to find out that the boat was still under warranty! By the way, Sea Eagles have a THREE year warranty, folks! Woo hoo! 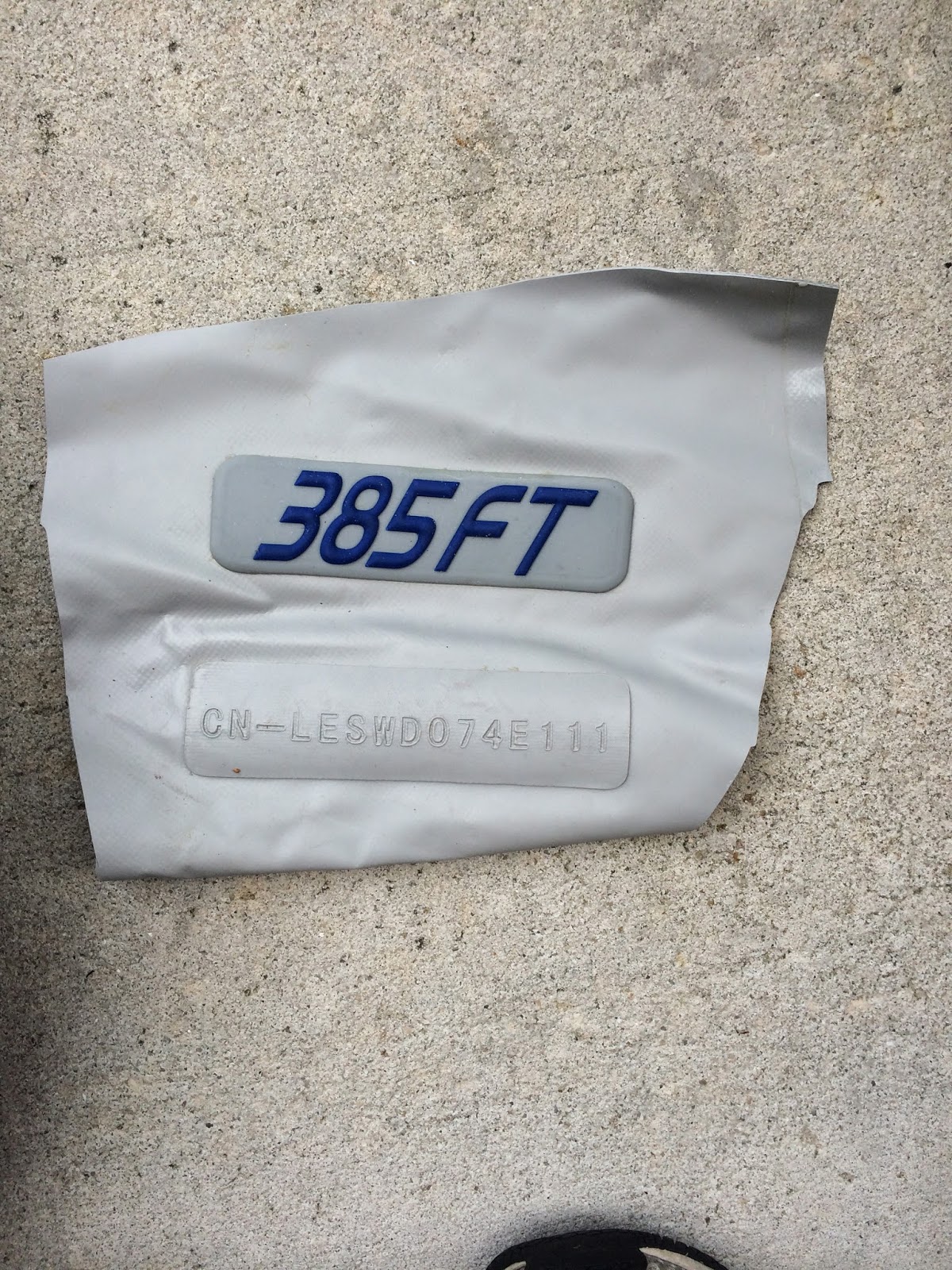 After sending some photos of the seam opening, Tim quickly got back to Sparky, said he had called Sea Eagle, sent them the photos and they were going to send out a brand new hull with a new, updated design at no charge. All Sparky had to do was cut out the DES label with the boat's registration number on it, rendering the kayak useless to repair so she wouldn't get a second boat out of the deal. AWESOME! In less than a few days, Sparky's new 2014 Sea Eagle 385 kayak hull arrived….YAY! There's one year left on the warranty on the new hull, so that's good.

Awesome service from Tim and Crystal…Thanks, guys! Sparky is back out on the river! 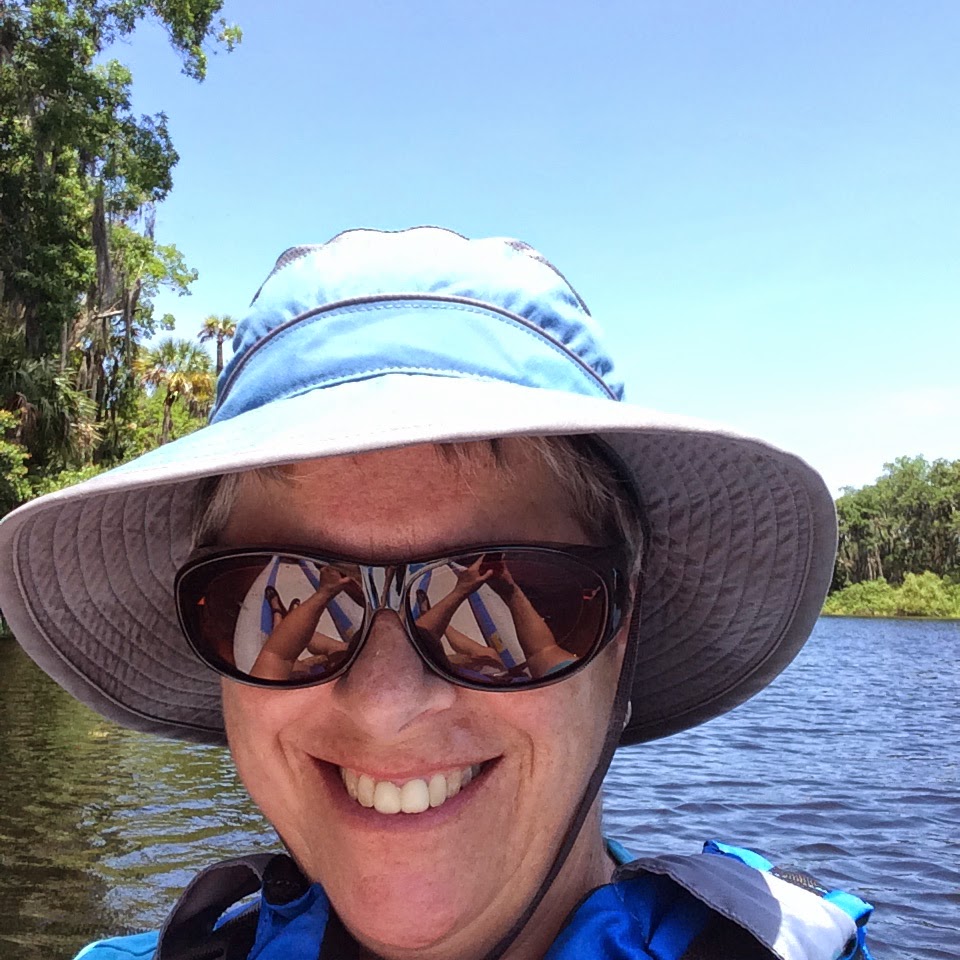 Followup note: The next time Sparky went out on the river in the new hull, before embarking, a fisherman came up to her, looked at her boat and said, "Just want you to know, ma'am, that three VERY aggressive male alligators are fighting over there (and he pointed in the direction towards the dam at Jigg's Landing) and you might want to make sure you don't go over in that direction."  Sparky was thinking, "Well of COURSE I want to go over there and see if I can get some photos of some gators duking it out!" But Eldy was with her, helping her unload, and SOME sense prevailed as Sparky resisted the urge to head in that direction after Eldy left the parking lot.  She looked to see if he was watching, and then decided, "Ya know….maybe it isn't such a good idea to go gator hunting in a rubber boat."  Sea Eagle says you can take a claw hammer to the boat and it won't rip the fabric but gator teeth might be another story.  Dang, I wish I had a hard shell kayak! says Sparky. 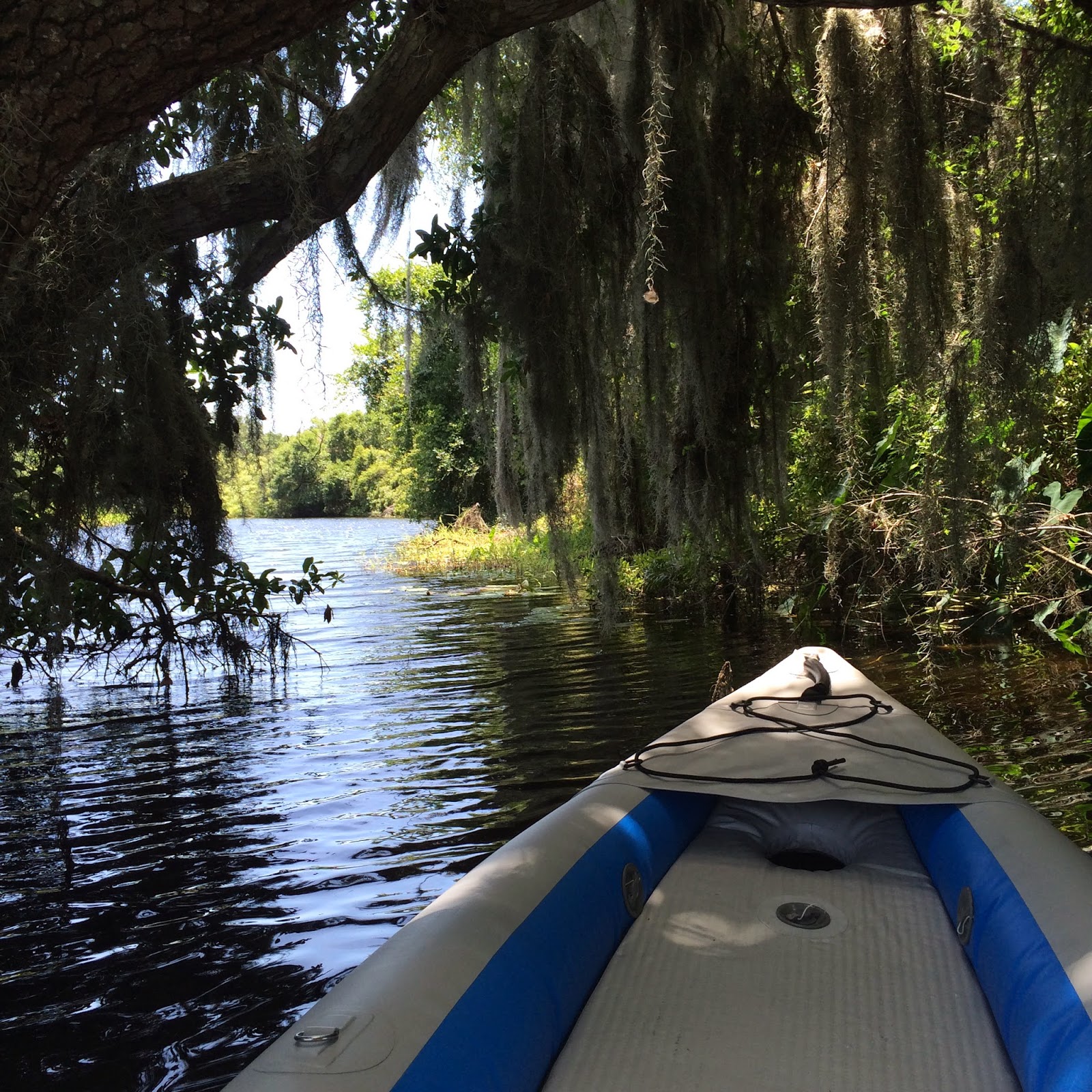 The Braden River is a beautiful paddle---some old houses along the river banks, some long stretches without any houses to be seen, and some nice wildlife along the way--today, juvenile great blue herons, a BIG turtle in the water….. 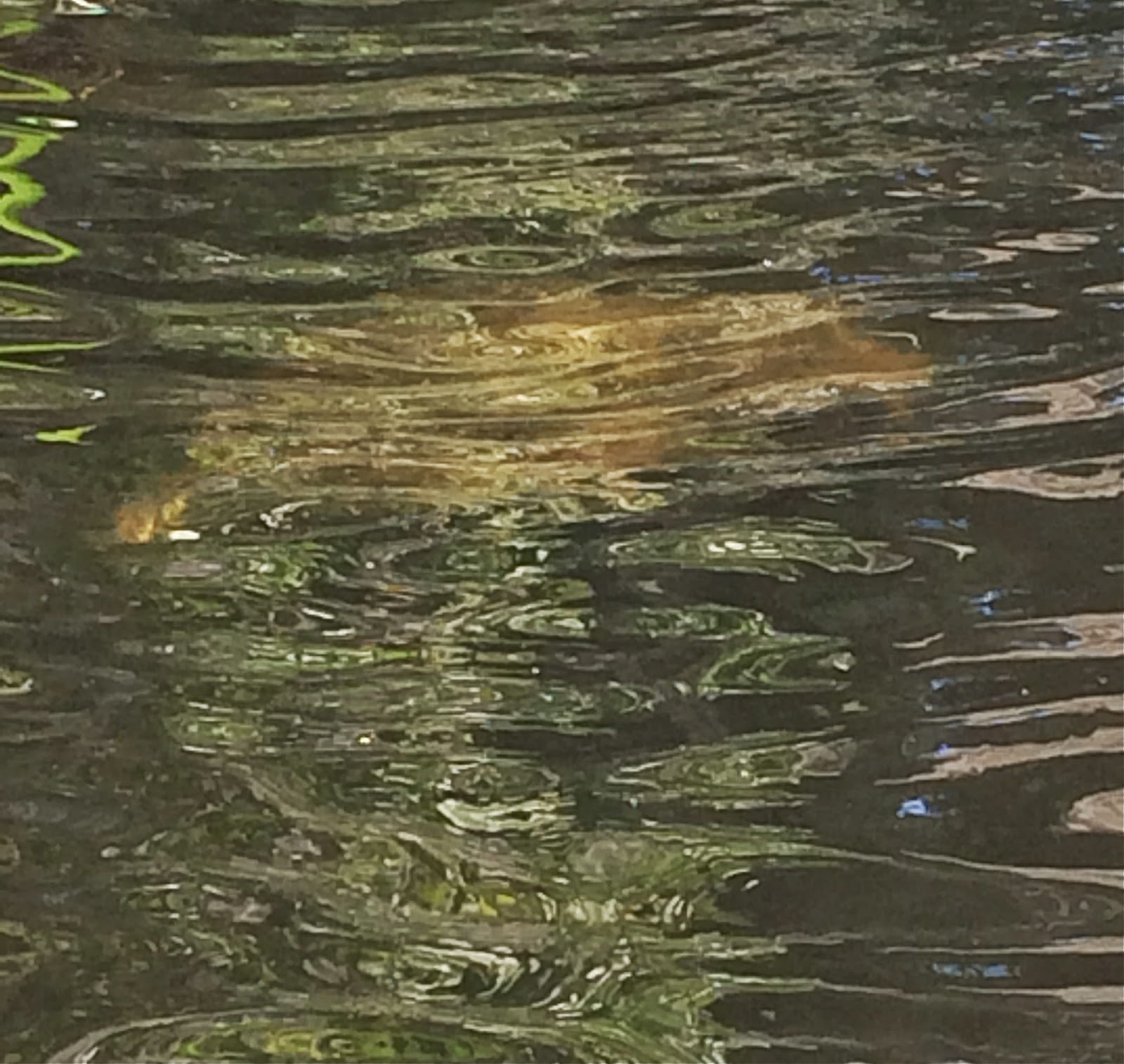 Some pretty leaves coming out on the trees…You would have laughed to see Sparky trying to angle her kayak in and around this tree to get a shot of this one overhanging branch. The wind kept blowing the Sea Eagle around, that thing turns on a dime. She'd position herself, the wind would come up, blow the kayak out of range and Sparky would maneuver herself back into position…Only to be blown out again and the camera couldn't focus. By the fifth time maneuvering, Sparky was cussing up a storm. Gotta get that shot! Bound and determined…Finally…. 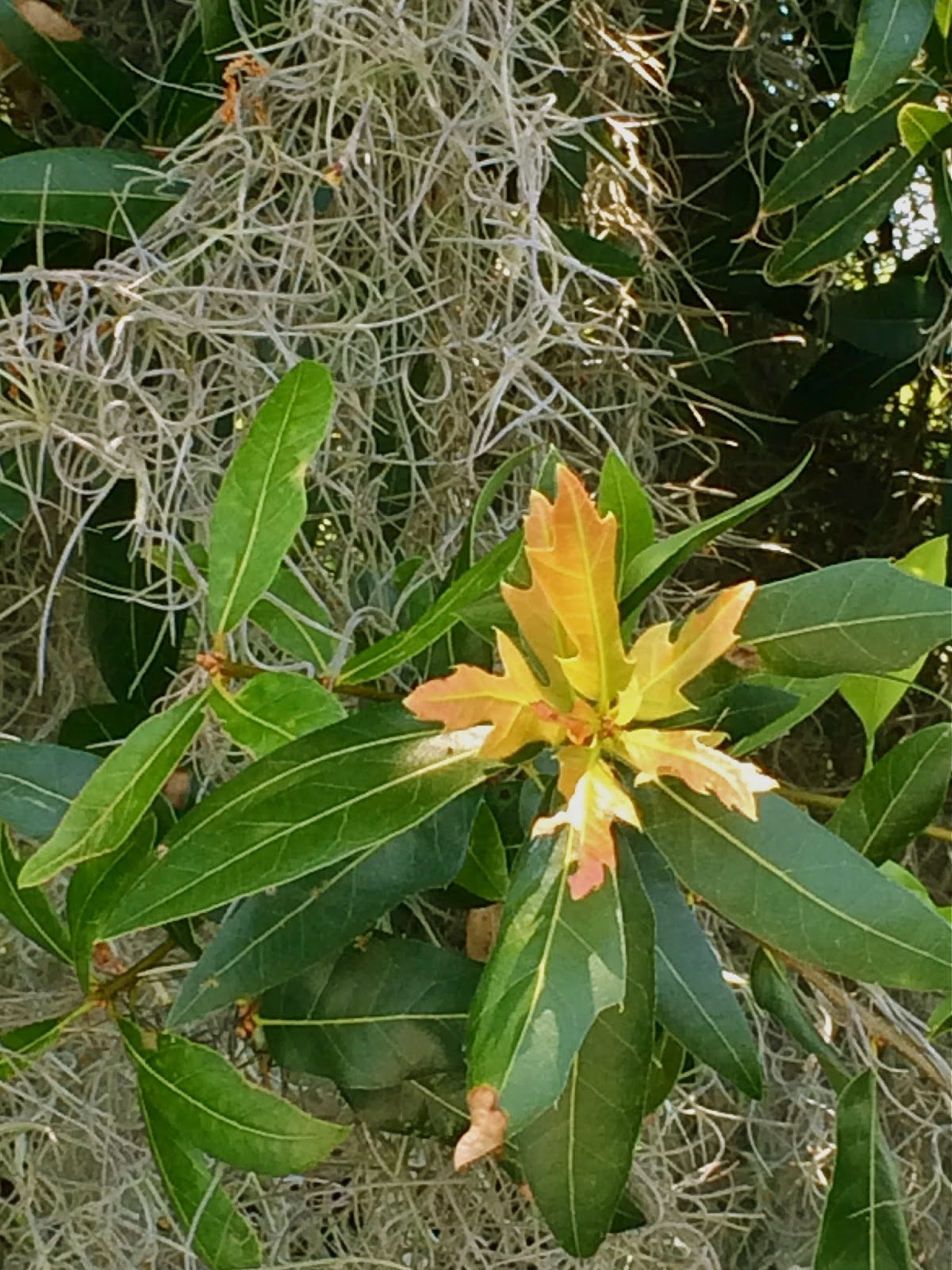 Now, it doesn't look all that special, especially with a camera phone…Oh, well…Sparky just loves taking photos of just about anything and everything….Time to go looking for some photo pops! See ya later…..
Posted by Jeannie and Eldy at 8:59 PM