The Last Couple of Days…A Mongoose Gets Loose!

Sparky's been teaching nearly every day to have some extra money for trips this summer. Sorry, no photos for this part, privacy issues for school kids, parental permission, stuff like that….

Kindergarten…..It was Cowboy Day, er, Cowgirl Day…Sparky had a great time going along reading stories with a Texas drawl and wearing a big ten gallon hat borrowed from the classroom teacher for a little while….It was fun to urge the little ones to "get along little doggies!" C'mon, cowgirls and cowboys, saddle up your horses, it's CHOW time!"  A LOT of the kids had on cowboy hats, or chaps or bandanas, and the teachers gave out metal sheriff stars for good behavior. The kindergarten teachers even tried to teach the kids to line dance. THAT was interesting! Kids going every which way and loose!

Another day this week was wacky Wednesday. Some of the staff really get into these theme days….This is one of the wonderful special education program teacher aides, Miss Stox…She followed the theme days every day this week. She has the patience of Job with the kids. She's great! 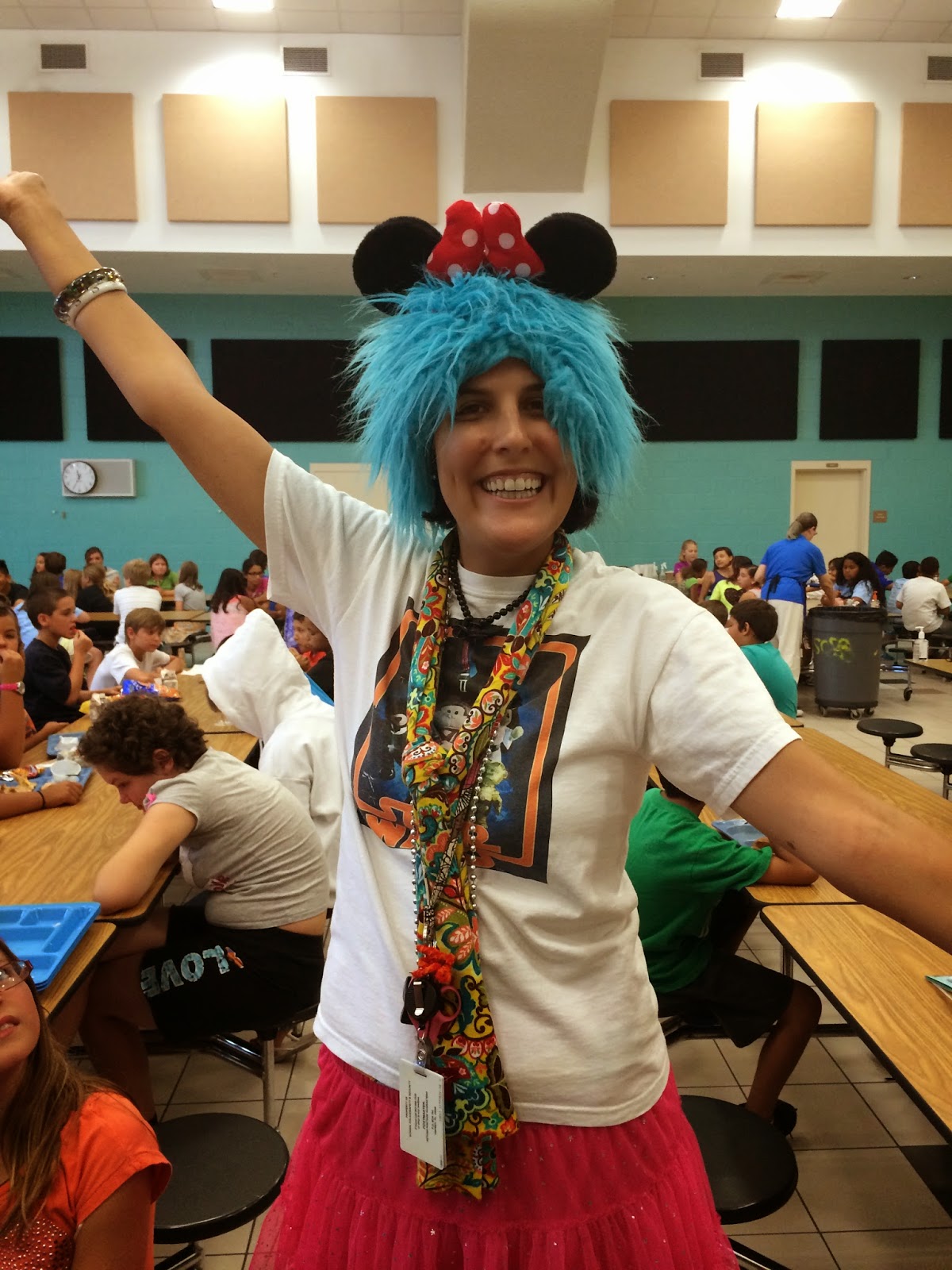 We special education teachers are a little wacky, don't you know! Gotta have a lot of heart and spirit to work with special needs kids.

Sparky subbed in a first grade classroom the next to the last day of school. Everything was going as well as could be expected, with kids at an all time high energy level, when Sparky introduced a lesson on popcorn which was going to be served later that morning. The object of the lesson was to first explore a piece of popcorn--a kernel, with the senses. OK, kids…what do your eyes tell you when you see the kernel? What do your ears tell you?  "Uh, Mrs. Sprinkles, (the kids hadn't got Mrs. Sparks down yet)…I just dropped the kernel in my ear and I can't get it out."   Sparky says, reassuringly, "Oh, you probably actually dropped it on the floor honey, don't worry about it. "   "No, it's really, it's in there, I can feel it!" the little girl says, remarkably calm. Sparky is starting to feel not so calm. She's thinking, oh, boy….this is not going to be good….Sent the little girl down to the clinic….Sparky checked in later…. "Oh, yes. There really was a kernel inside her ear. She's going to have to be sent home and taken to the doctor or the E.R. where they will suction it out."   Yikes! Thankfully, parents weren't too upset. These things happen all the time says the nurse…Don't worry about it…..The teacher won't be upset…Sigh….says Sparky. But she still worried….

OK, so we move along to visiting the second grade classrooms as a preview for the first graders to familiarize themselves with their possible teacher for next year. Parade around the second grade classrooms, one at a time, ask questions, see what's what in second grade. We get to the last classroom visit, and the teacher has a critter in a wooden box with a partial metal cover on it. The kids ask what's in there? Is it alive? Yes, he says. What is it? ask the kids, crowding around the box like trap. He points to the board where there's a mongoose illustration being shown as the current second grade class is studying them, and he asks, what do you think it is?  The kids guess "mongoose". He says, that's right! Sparky's like, yeah, sure. But she can see that something is in there. Be careful, he says, as the kids lean in closer, trying to see.  He adds, they bite! The kids lean even closer, "I wanna see, I wanna see!"

The teacher says, "Can you hear him purr? Listen closely, but not too close. You can scratch the outside of the box and maybe he will come closer to the screen where you can see him." We all lean in, including Sparky, trying in vain to see the little mongoose, and all of a sudden the teacher yells, "LOOKOUT! THE COVER IS LOOSE!" The cover flies open and out flies a pelted fur animal of some sort. Sparky screams "AC-C-C-C-C-K-K-K!" The kids scream, "A-AAAAAACK!" The animal was wired to the trap door opening to come flying out when Mr. W. pulled the string. It was some kind of skunk pelt. And the kids went bananas…."DID YOU SEE THAT? IT HIT ME IN THE NOSE!"  "IT CAME FLYING RIGHT INTO MY FACE!" exclaimed another. "It scared me half to death!" Sparky said. And she told the teacher,  "Mr. W., I think you just shortened my life by about ten years!" The kids couldn't stop talking about Mr. W. and his animal for a LONG time after we got back to class. But it was really funny. Naturally, all the kids wanted to be in Mr. W.'s class for next year.

We got through the rest of the day without incident….Whew! Sparky is going to miss the little rug rats, but she's ready for a rest!  See you soon….in a calmer place probably….
Posted by Jeannie and Eldy at 7:00 PM