May is Manatee Mating Month!

The paper had a cautionary warning: "DON'T TRY TO SEPARATE OR PUSH THEM AWAY FROM EACH OTHER!"  Manatees with their bulky bodies (they can weight up to 3,000 pounds) and the roiling of the males jostling for the females trying to get a mate could cause injuries to someone. There's a lot of violent thrashing and rolling going on in shallow water. Guess some people think the manatees are going to strand themselves and need help getting pushed out to deeper water. Leave them alone and let them do the deed, is the preferred recommendation. And by the way, it's against federal and state laws offer them food or water…..Just an F.Y.I…….

We've got love bugs mating, we've got manatees mating, the turtles are laying eggs…What else is going on? A trip to Anna Maria Island City Pier for the latest sightings….Rays! At least two schools of them parading back and forth along the city pier…Wonder if they are mating? 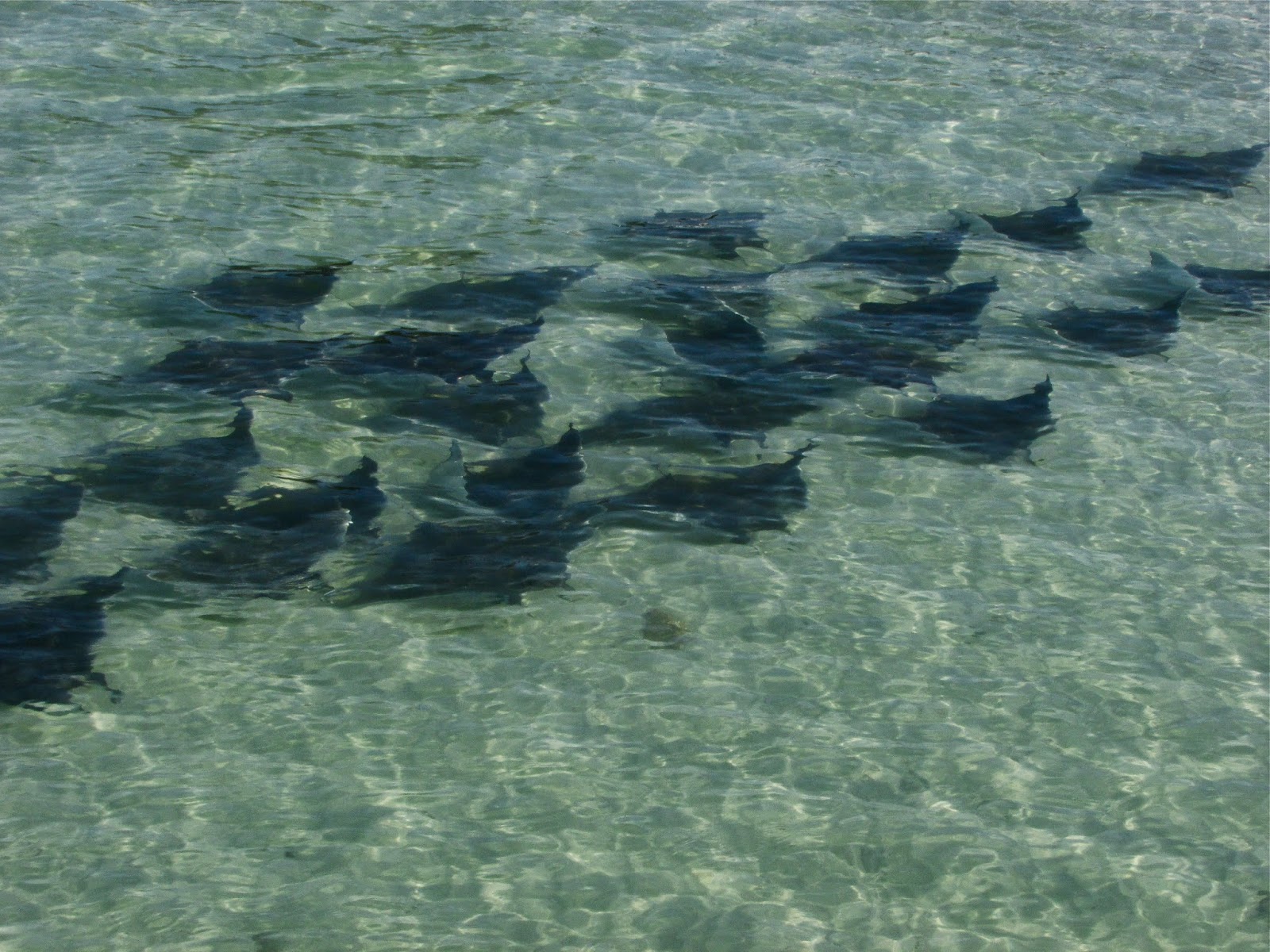 Sparky loves the way they orchestrate their swimming and turn maneuvering together…. 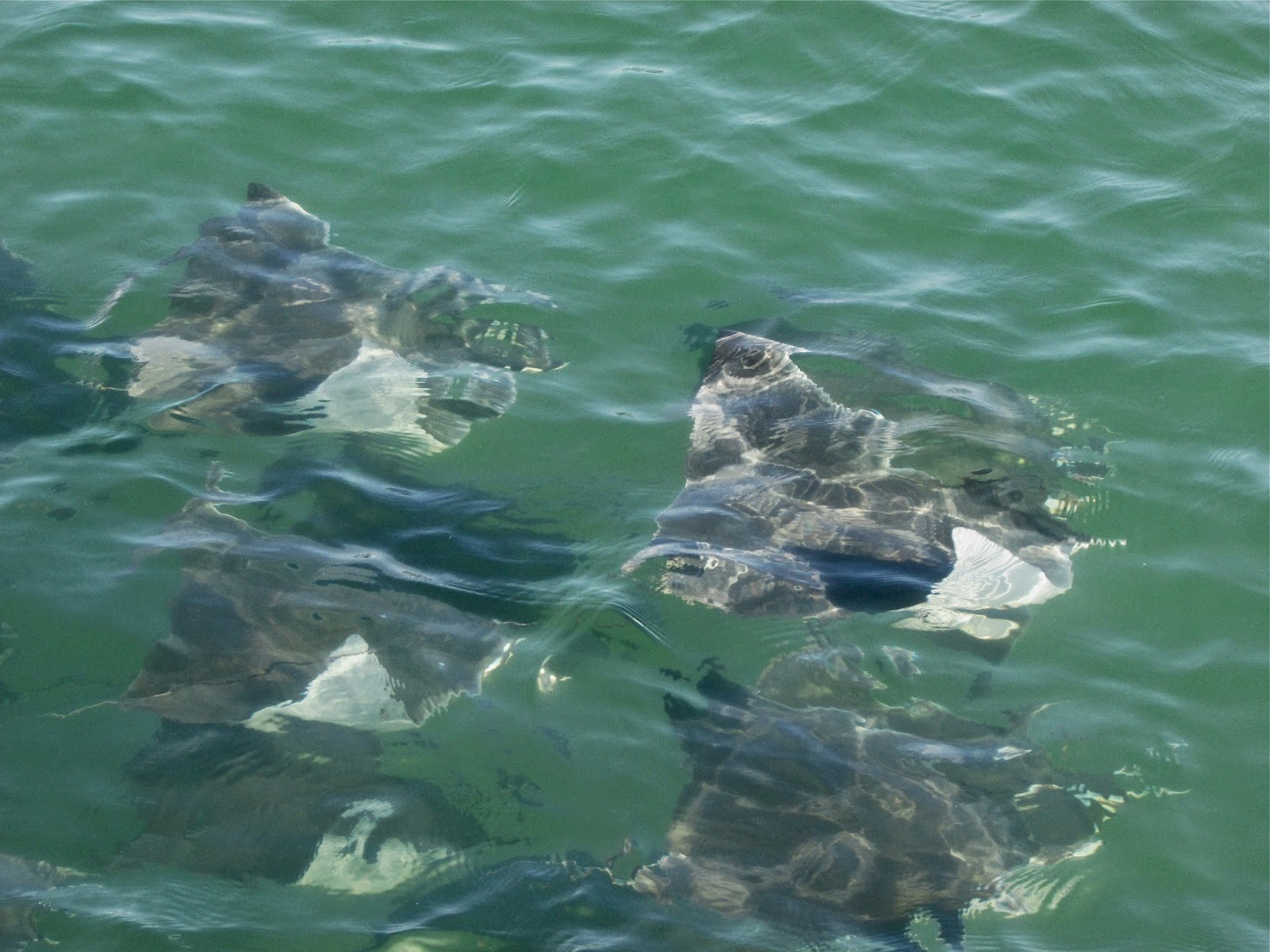 The pelicans are interesting to watch. Sparky always thought their food was obtained through plunging into the ocean from high dives in the sky. But sometimes they just sit and wait for the food to come to them. Down goes the bill into the water, and their throat pouches swell up to the size of huge balloons as they use their pouches like a net. They hold both the water and the fish in their pouch. 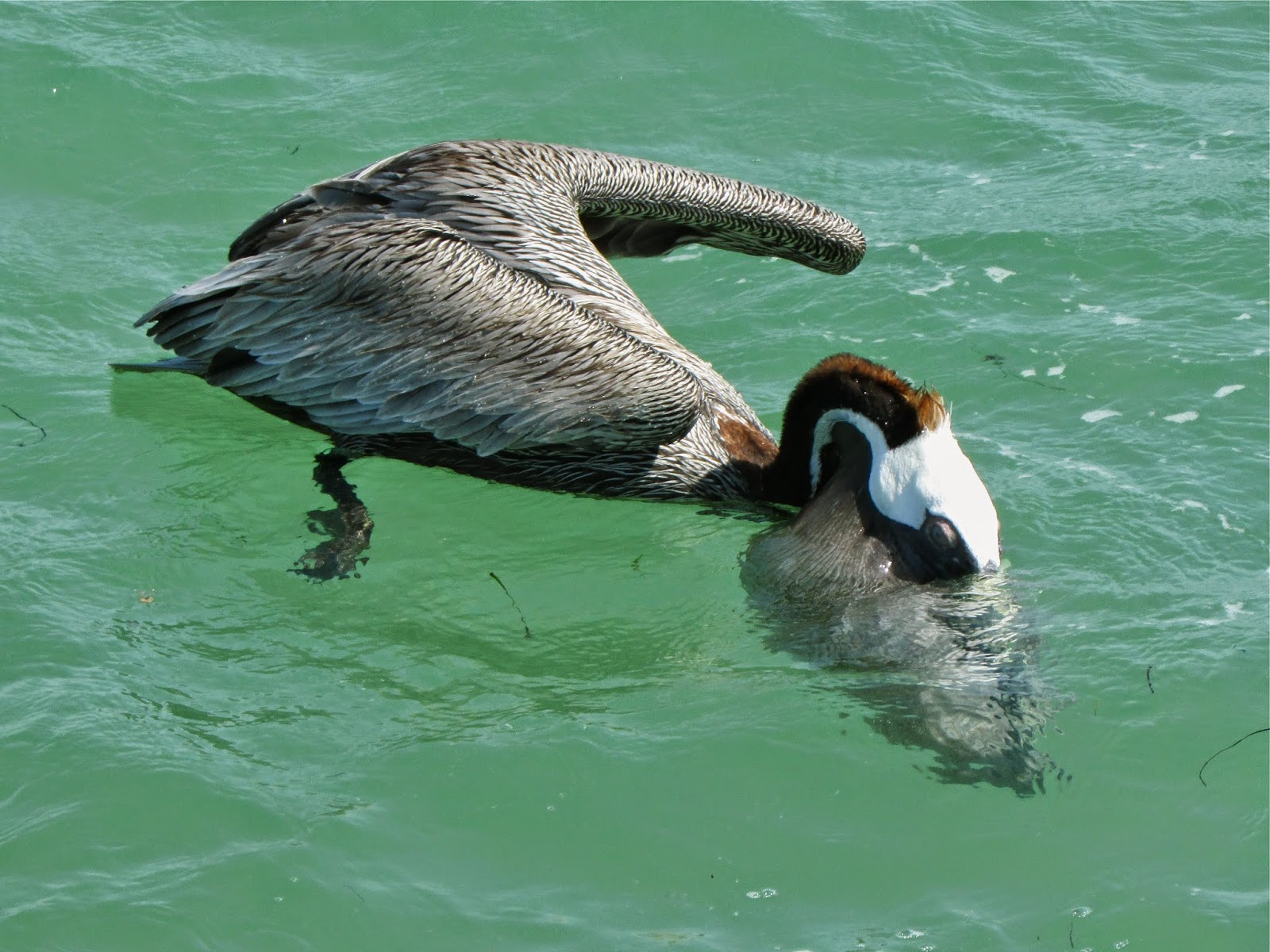 Then they drain the water from their scoop, and proceed to swallow the fish with great big GULP, GULP, GULPS, clapping their beaks together as they swallow. Their pouch is also used to hold water to cool themselves down, too. 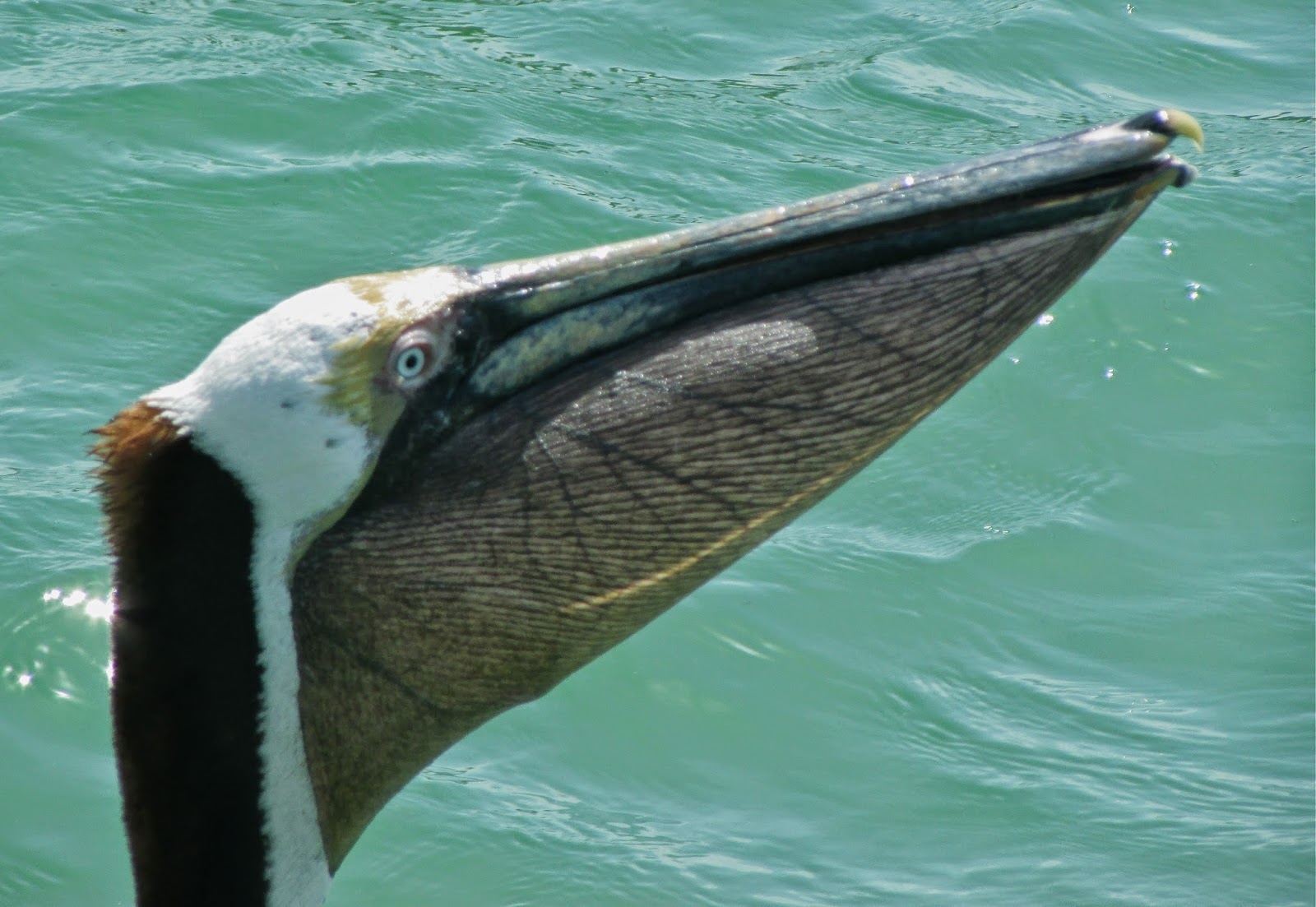 This is pretty common to see, too. The seabirds were landing on the pelicans just as soon as they saw the pelican's head swish below the water.
They waited trying to figure out how they might partake in some of the pelican's food. Then they started to get impatient. This bird started pecking the pelican's head!
The pelicans weren't interested in sharing, not one little bit…..

Finally, once the pelican's head came up, they knew their chances were greatly diminished, so they flew off, looking for the next bobbing pelican head…..Pelicans eat up to about four pounds of fish a day and these guys didn't seem to having any trouble finding the fish today. Over and over and over the beaks went down swooping for the fish kill.

We were sorry to see this pelican had had a run in with a fisherman, you can see the fishing line around his beak, it almost looks like a pair of spectacles, but he was still able to eat….There are signs on the city pier how to disengage the fishing line from birds if they get attached, but you would think it would be VERY difficult to restrain a big, combatant pelican to get the line out, wouldn't you? 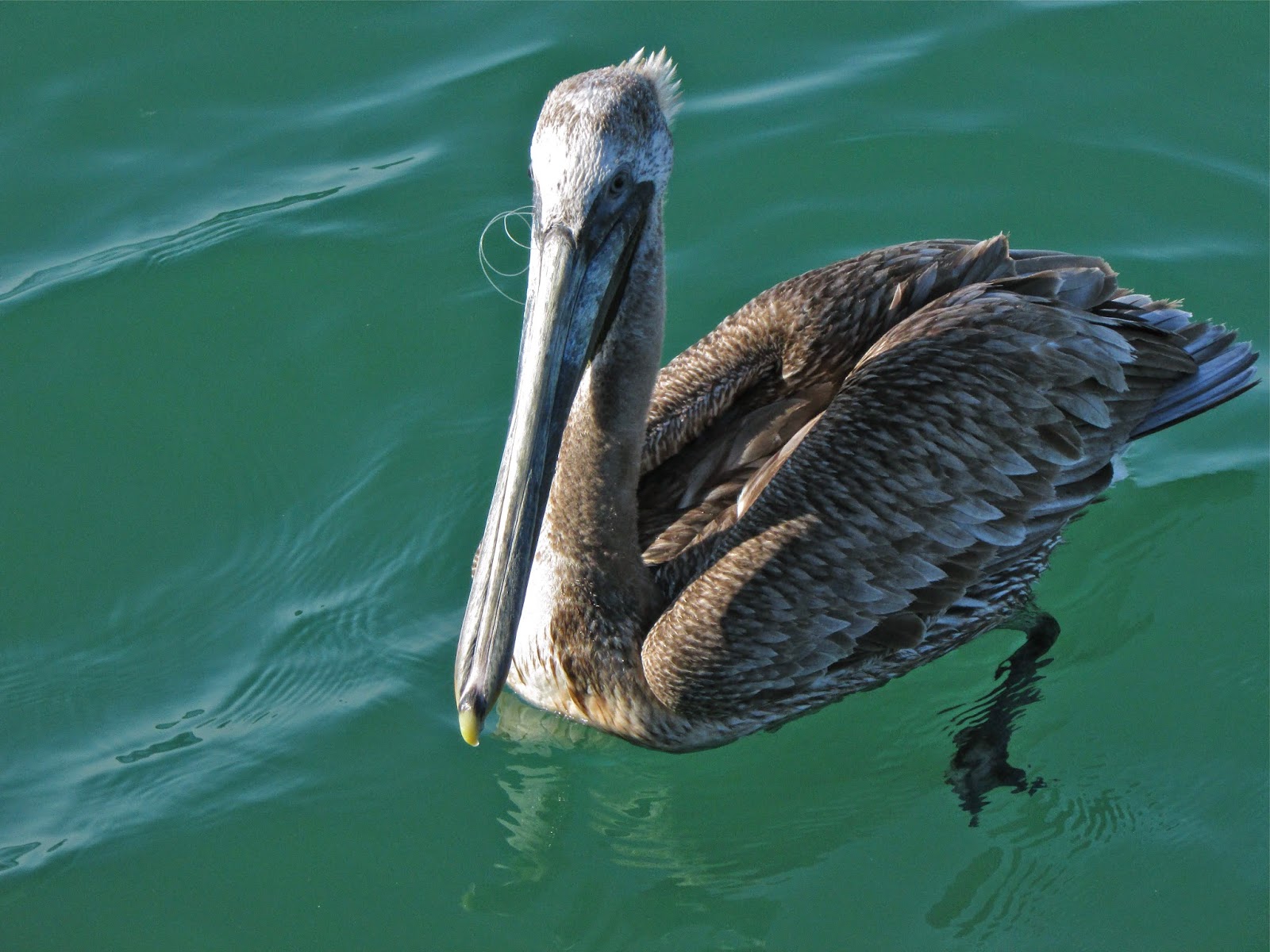 We saw one lone manatee a ways out from the pier. We think it was a tired female….. 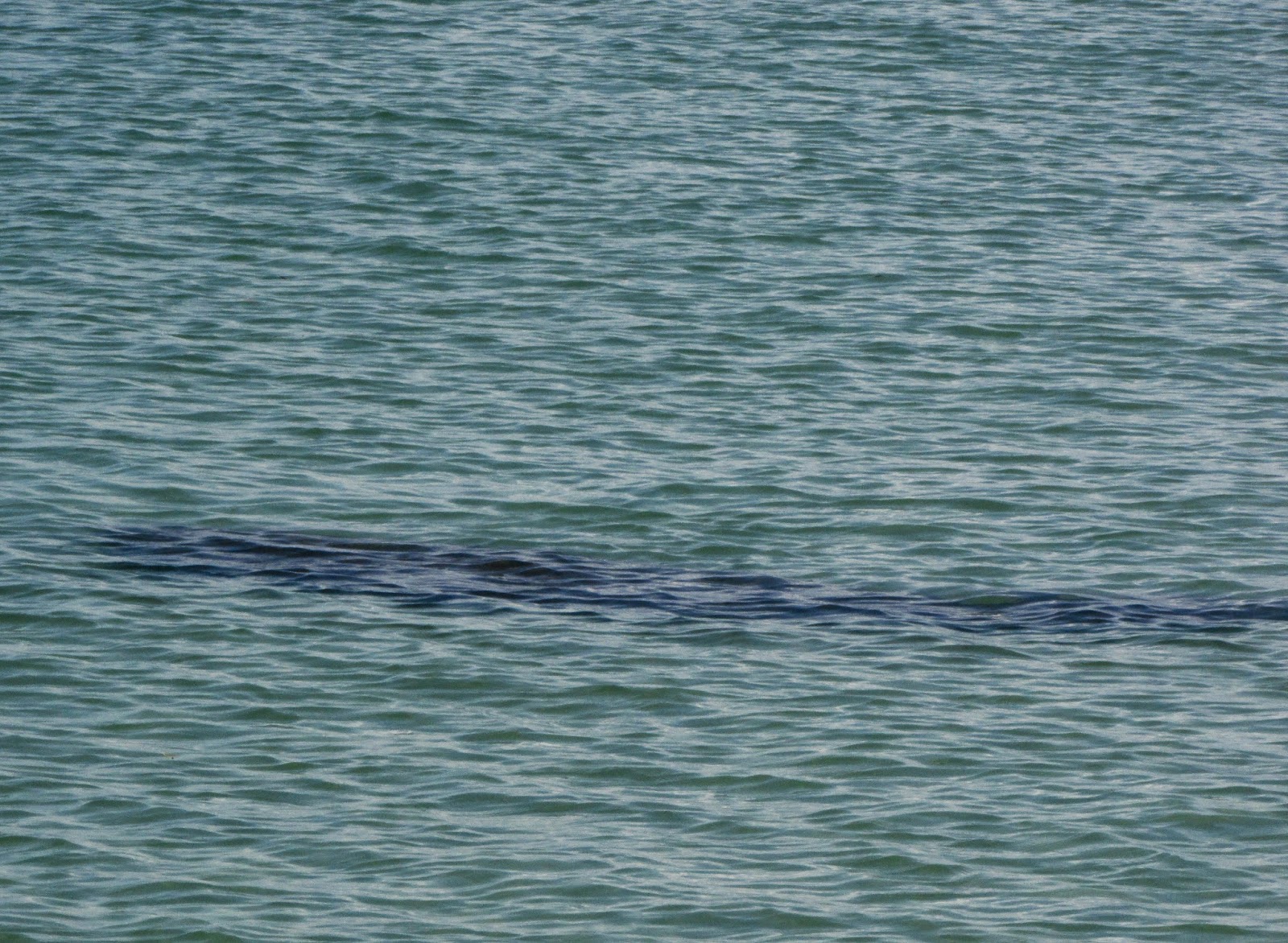 We LOVE Anna Maria Island and the city pier…..Another beautiful day in paradise, as everyone who lives here likes to say…..