Last year Sparky and Eldo went on a wonderful dolphin hunting adventure….It was called Dolphin Racer Speedboat Adventure Tour.  The boat tour leaves out of St. Petersburg. We got a Groupon coupon last year and went for 12.00 a person. This year was early for us to be going, too early for Groupon coupons and since Kristi and Connor were here visiting, even though we didn't have a Groupon coupon, we wanted them to experience the cool tour. So we booked--24.95 for each adult, and 14.95 for kids, kids under 2 are free.  The very young kids didn't seem to enjoy it as much. Maybe because it is too windy, and the boat engine is very loud if you are at the back of the boat. This little gal spent almost the whole time hanging dearly onto her hat! 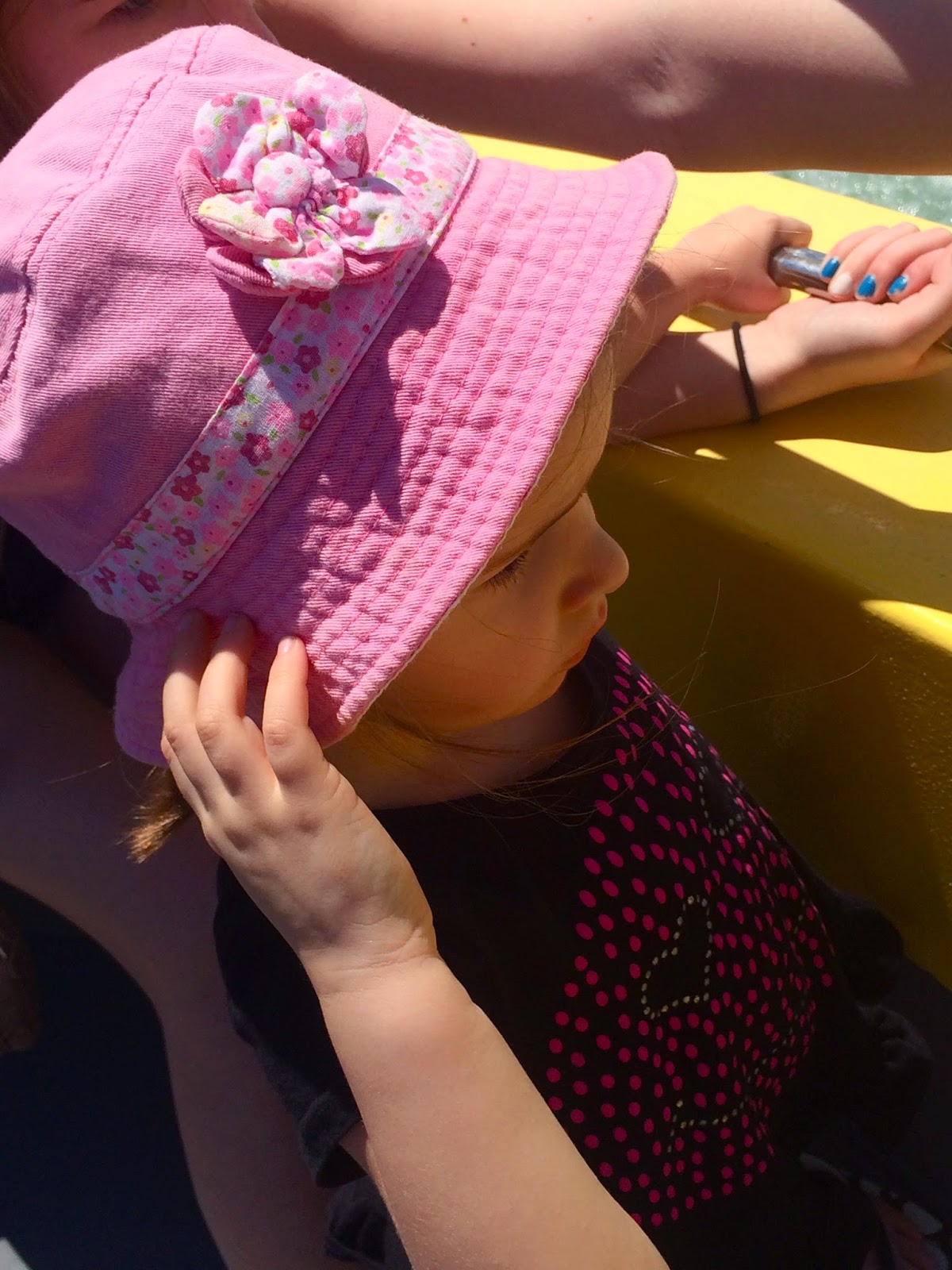 We went on a weekday, and even though it was a week day, it was spring break. We had to contend with a LOT of boat traffic that slowed our speed down several times.

The trip did NOT disappoint! Even though you can see dolphins out in the waters of the Gulf on a regular basis around here, it's tough to spot them with a camera, and the sightings are not as often as they would be if we were at the ocean's shores more. And they are usually farther out, making a nice photo tough to get. The boat tour gives you a chance to get some wonderful shots close up of the dolphins playing in the boat's wake. And, the captain gives informational stuff about famous people who live in the area, and tidbits about the history of the islands and waterways. We are two out of two times seeing dolphins up close and personal playing in the waves of the speedboat on this same speedboat tour. The dolphin action started almost immediately.....

Sparky started fiddling around with her camera….Decisions, decisions…Use the iPhone burst setting? By the way, holding down the photo click button shoots an incredible number of multiple photos just like the burst setting on a regular camera. Don't hold down the "home" white button on the phone, or you will get a puzzled Siri. (Ask Sparky how she knows that.) Should she use her little Canon Powershot? After missing a couple of fantastic shots by fiddling with devices, Sparky said, aw, the heck with this! Just watch the "show"! But she did get a couple of shots….Here comes the first wave of dolphins….. 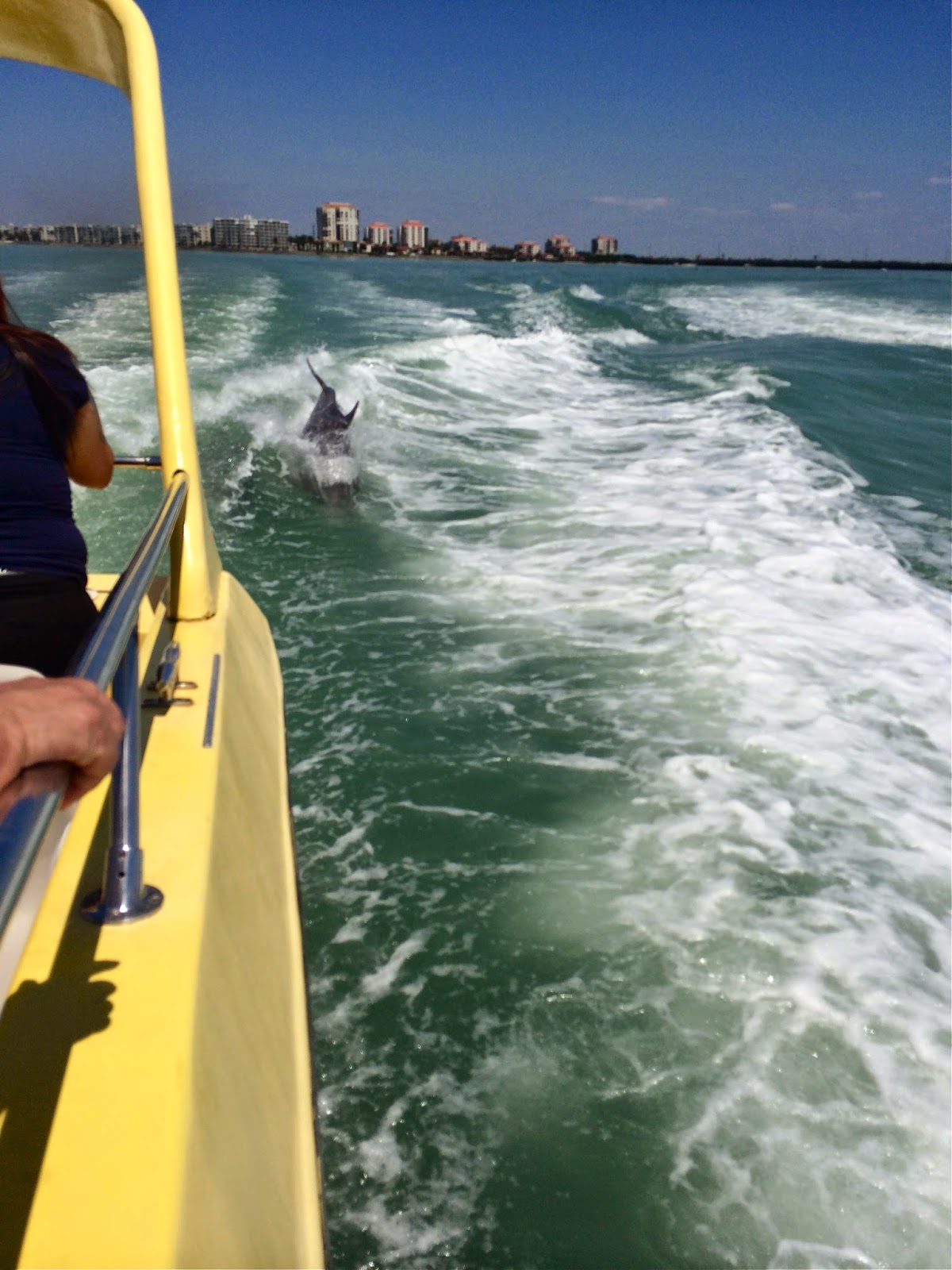 There was one dolphin careening through the boat's wake on his back…He'd come up for a bit, and slice back through the waves on his back…The captain said we had to make a TON of noise, cheering, clapping and whistling. He said the more noise you make, the more the dolphins will play. We weren't sure if that was really true, but it made sense. However, we did not have a full boat or even half full, so the captain said we were "wimpy" on the noise making. The dolphins came to play twice, but they didn't hang around long. Maybe because we didn't make enough noise? Eldo is wisely keeping quiet on that last statement. (Sparky has been known to be quite vocal on lots of occasions, and that's all I'm gonna say about that! says E.)

Man, can these dolphins swim FAST! Here comes another one slicing through the water….. 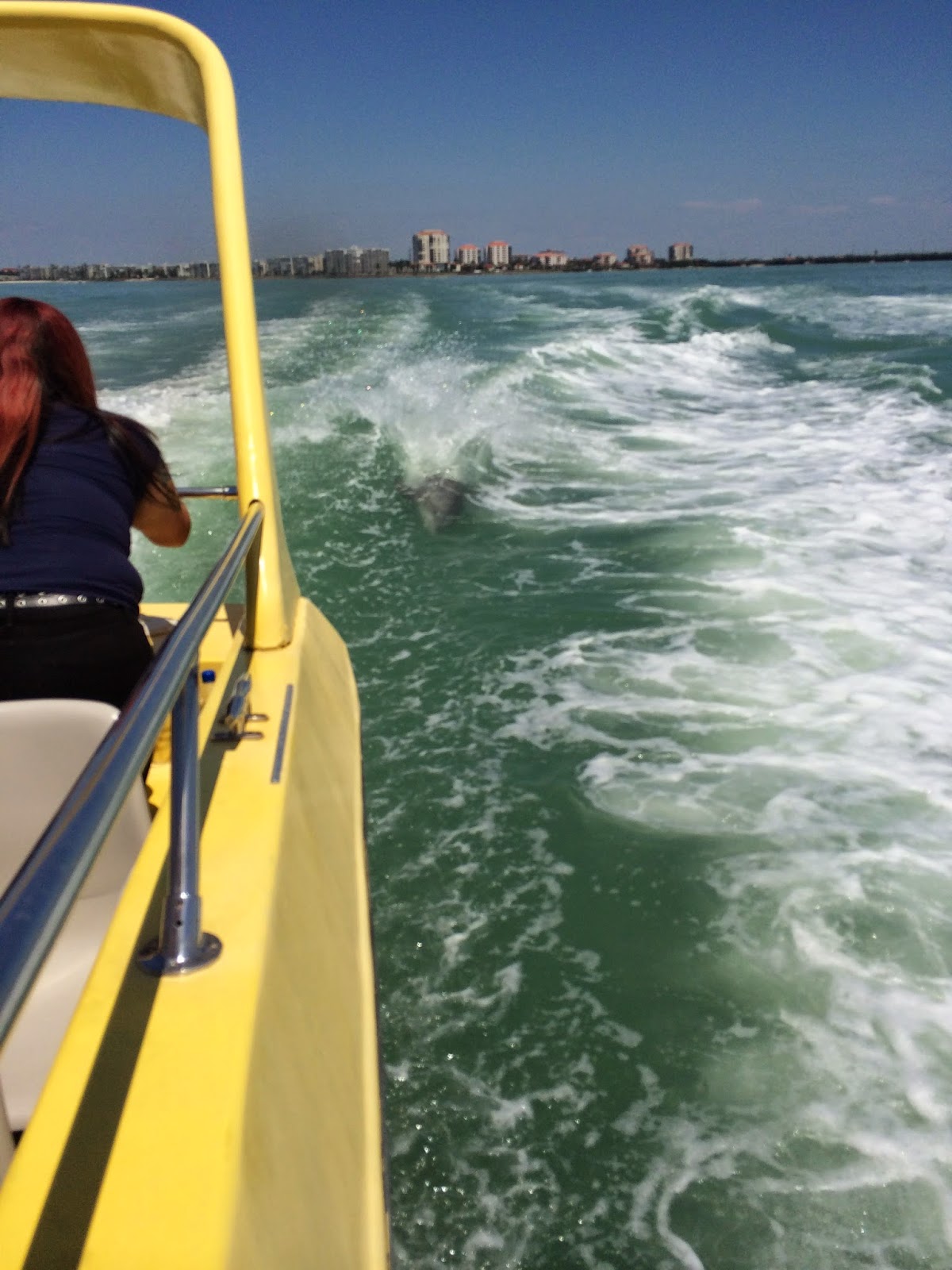 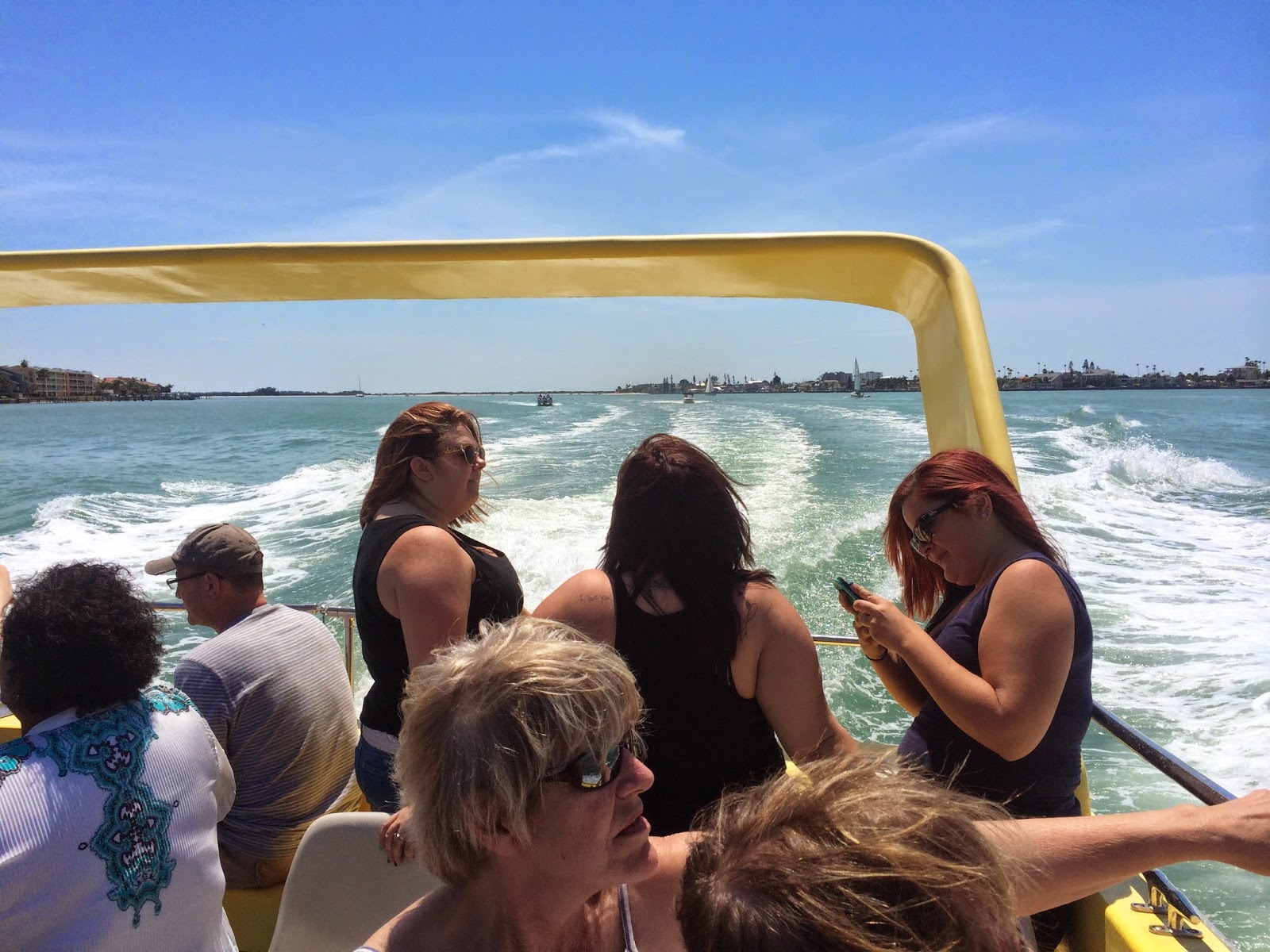 We were annoyed that they were allowed to take the places of paying tourists, and that they didn't take turns letting others have a chance to see what was going on in the wake.

The biggest event of the hour and a half cruise was a 60 pound tarpon got in the action with the dolphins and jumped clear out of the water at the back of the boat. The captain saw it and exclaimed he'd never ever seen anything like that in all his time out on the water. He was VERY excited! Did Sparky see it? No-o-o-o… too busy fooling around with her electronic devices trying to get photos along the side of the boat. Did Eldo, Kristi or Connor see it? Nope…All looking in a different direction….But others saw it happen and marveled at it along with the captain…..

Kristi got a couple of terrific shots--thanks for sharing these with us, Kristi! 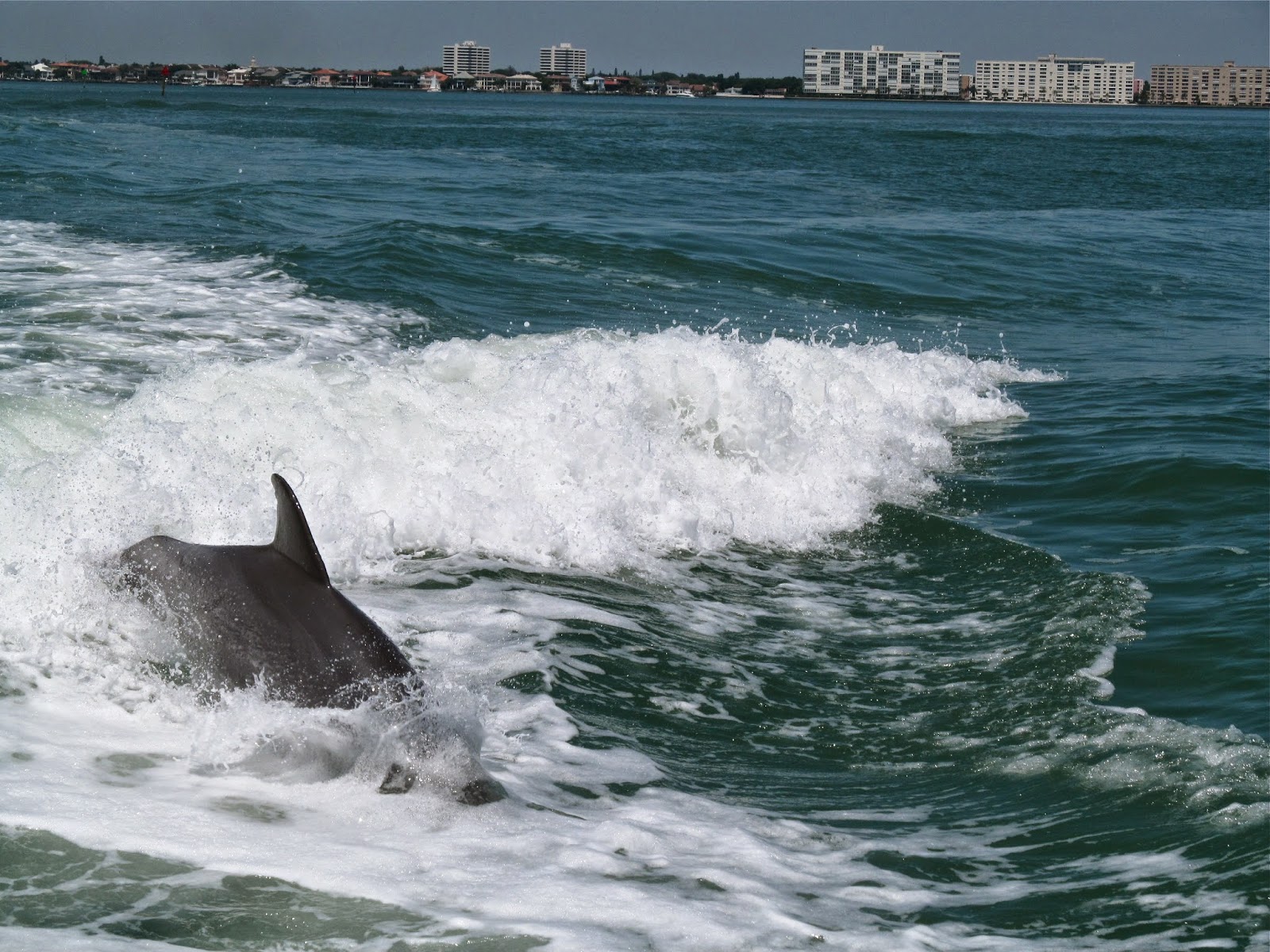 Here's the best for last…. 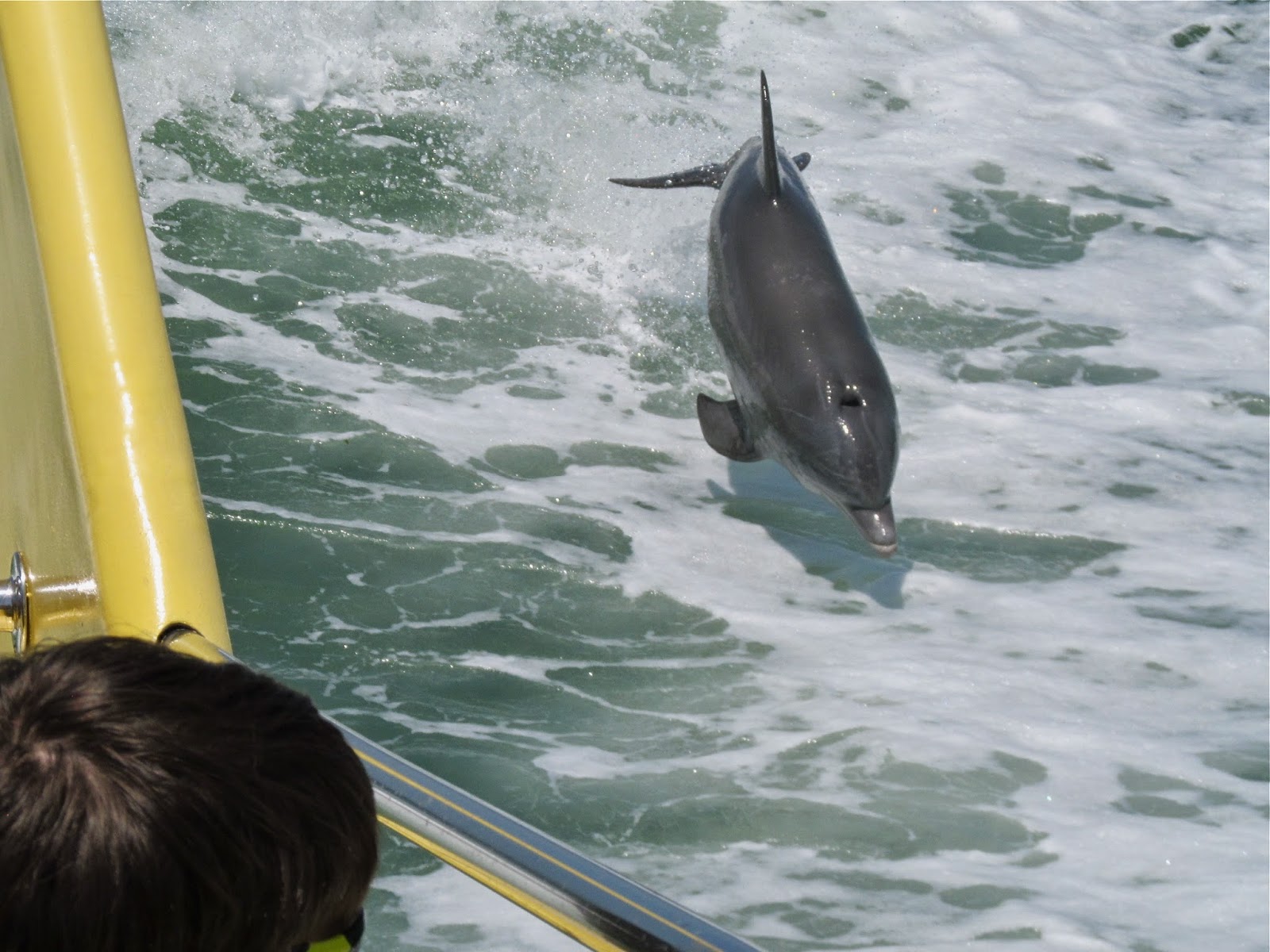 It was a beautiful day but for some reason, the boat was lightly loaded. The day before, it had rained and was very very windy. The boat was full that day, go figure that one! On our beautiful day, guess everybody decided to hit the beach as spring break week was winding down. That made for a terrific trip out on the water today with plenty of room on the boat to move around. Connor loved seeing the dolphins, Kristi did, too, and there was LOTS of action. And of course, Sparky LOVED it! She'd go again in a heartbeat!

We highly recommend this dolphin tour!
Posted by Jeannie and Eldy at 11:00 PM