It's time for more weird and wacky "Florida Man" stories….Somewhere Sparky read that Florida seems to have more than its share of "weird and wacky" news. We see this mentioned on TV and in the newspaper on a regular basis almost as if the local news media is bragging about this dubious honor of having some of the weirdest stuff to report. It seems to happen more often here than most other places in the country. All that sunshine is affecting our brains down here, we guess. There are plenty of websites and blogs are devoted totally to the topic of the strange, bizarre, funny, and wacko…Like Fark.com for example…."Real news, real funny"...silly stuff but true! At any rate, "Florida Man" is a Twitter feed that gathers news headline descriptions of true stories of what Florida males are doing to attract attention in the news. The tweets are meant to be as if a single Florida guy were doing all this crazy stuff….Here are some examples from recent events that really happened….

"Mall evacuated after Florida Man sprinkles ashes of recently deceased wife in her favorite store, Lens Crafters…." This was at a Sarasota mall and made big news here locally….

Other frothy stuff…we spent some time at the beach lately, but not for very long, with a storm coming in…Don't you just love the way these shorebirds, some kind of terns, all line up facing the same way? Wonder if they are forecasting the direction of the storm coming in? :-) 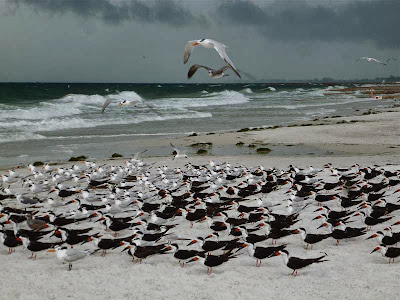 There were other shorebirds at the shore…Sparky is not sure what kind these are, she looked everywhere to try and identify them…But they are beautiful with their striped coloring. Their beaks curve UPWARDS which is different from the usual downwards or straight beak. 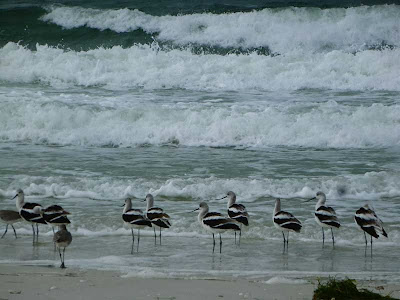 There was a sand castle contest with some big sponsors there….Keep Manatee Beautiful and Anna Maria Island Privateers had the biggest and baddest sand sculpture there…..They were sponsoring the Sandblast/Pirate Invasion at Coquina Beach this past weekend….There's another sand castle contest coming up soon at Siesta Key Beach. We'll love to check that out! 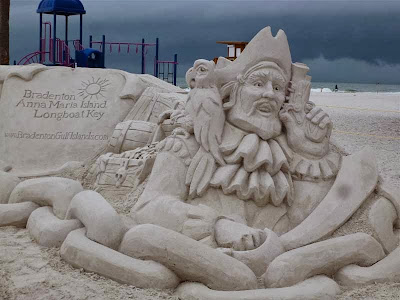 Kids would have had a TON of fun here at this sand pile….But the storm coming in kept them away for awhile….We had to leave before we could see them dig in….The rain was coming. 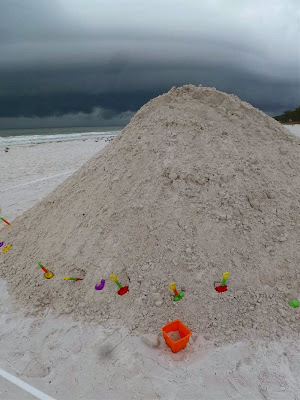 Off to find some other things to do today. There's no shortage of things to do here in the Sarasota/Bradenton area. There's a symphony concert back here at Coquina Beach on Anna Maria Island coming up soon. It's hard to decide which activity to do, there are so many wonderful things going on here to choose from!  See you later…..