Where I Stand and The Red Light District

Well, hi, there once again! We're back, briefly, and will be now and then when Sparky has something to say of interest...or she thinks she does.  :-)  Bet she caught your interest with the blog title besides showing up as published today! You have probably heard of Florida's "Stand Your Ground Law" which has been in the news lately...It's a type of self defense law that gives individuals the right to use deadly force if they feel their life is in eminent danger or bodily harm is going to come to them. Quite a few states have laws like this on their books...It's controversial and has been heard from on the George Zimmerman case down here in FL, but Sparky is not going to get into that line of discussion...But when she heard that it's also informally known as the  "Line in the Sand" law, Sparky digressed and thought about where SHE stands these days.... 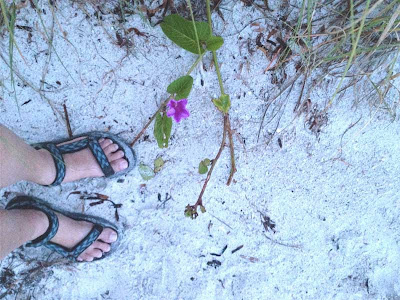 At the beach! Well...sometimes...We got up at the ungodly hour of 4:45 AM this morning, to go see if any turtles are making their way out of their nests by now.  Now, the prime time for seeing baby turtles make their way to the ocean is in the middle of the night. We had a full moon last night, but Sparky wasn't going to get up in the middle of the night to try and find baby turtles which is like trying to find a needle in a haystack, no sireee...And Eldy isn't either, so this was the best we could do.

Southwest Florida beaches have the largest nesting population of Gulf of Mexico loggerhead sea turtles. Nesting season is from May 1 thru October, and gestation is about 90 days from the time the eggs are laid till hatching. Little turtles are hatching all over the place about now, we figure, so we wanted to see if maybe we could see some. Just last week, about 50-75 baby turtles got turned around by some condo lights and headed into a parking lot, and were rescued by a police officer and another bystander who happened to see the little ones crawling in the parking lot. Some quick thinking and a cardboard box saved a BUNCH of them. Over 20,000 baby turtles are disoriented by condo and housing lights each year, and never make it to the ocean. They get turned around by the artificial lighting, and then as they crawl towards the light source, are eaten by fire ants and ghost crabs, die from dehydration, or get run over by cars.

So, the turtles are protected to some degree by coastal light pollution regulations in this area. Residences and businesses have to shield their lights and use special red/amber ones during nesting season. Amber and red lights that have to pass a special spectrometer test are required for usage. They also have to face downward and away from the beach. Violators are fined 1,000.00, so this is a serious issue.

When we were out and about this morning at Lido Beach, we saw LOTS of red lights, hence the "Red Light District".  :-) Sparky really wanted to get a photo of all the red lights, but she couldn't with the camera phone. We know you are disappointed not to see the red light district. Really, it's quite beautiful, almost Christmasy.

Lighting companies in the area have websites totally devoted to using "turtle friendly", approved lighting, like this one company, Synergy Lighting: http://synergylightingusa.com/turtle-friendly-lighting-amber-led-light-bulbs-light-fixtures-fwc-approved/

We didn't see but one nest on Lido Beach, and it was dormant, so Eldy said, "Let's head over to Coquina Beach" on Anna Maria Island. He knew there were quite a few nests there, and off we went.

He was right...We saw at least seven nests right on the popular Coquina Beach, including one right next to the lifeguard stand. 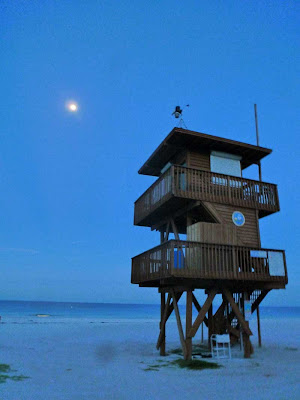 It was very well marked. But no little guys out crawling around anywhere. 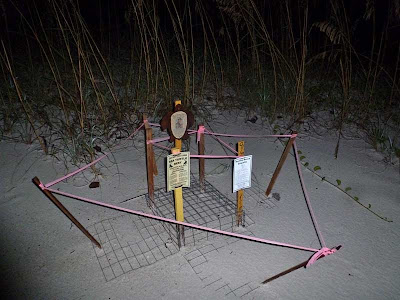 It was a quiet early early morning walk on the beach.....

It's amazing and a credit to the volunteers who walk the beaches and monitor the nests, and to the public that supports their efforts to preserve and conserve the turtles, that people leave the nests alone, at least it seems that way.

The nests on Coquina Beach are monitored by a different group of people than the Mote Marine Aquarium group who monitors the Long Boat Key nests. These nests at Coquina Beach have little cages in the center, and metal cage "legs" that splay out to the four corners that mark the nest. The cages are to prevent raccoons from making a meal of the hatchlings. The volunteers and the turtle watch groups have an amazing coordinated program to protect the turtles. We are glad they do...It's a wonderful thing if you get to see the hatchlings make their way to the sea.

We talked to a lady this week who said she and her boyfriend fish for shark (!) and when she does, it's all night long. (Hmmmmm, are you sure that's all they are doing? wonders E.) HEY! Heck if I know! retorts Sparky. AHEM! When they do fish, they wear special headlamps (red, of course) so they can see what they are doing. They were fishing one night at 2:00 AM. and she kept seeing something out of the corner of her eye. There were what seemed to be fifty of the little baby turtles making their way past her to the ocean. She says, "Now I'm not a tree hugger, or anything like that, but this was one of the most moving things I have ever experienced."   And how!...Very cool.....

We didn't see any this morning, but we'll head back again a few more times in hopes of seeing some....Maybe even EARLIER in the morning, right, Eldy?  Eldy?

Email ThisBlogThis!Share to TwitterShare to FacebookShare to Pinterest
Labels: fishing for turtles, lighting for turtle protection, loggerhead turtles in SW Florida, sea turtles, the red light district, where I stand