Sparky has been a busy little beaver...scrubbing the great room tile floor with hydrogen peroxide and vinegar with a TOOTHBRUSH--yep, you heard that right, folks, a toothbrush along each grout line!...For more details on how it's done and how long it takes, lol, you can check out Millie's Girls in a few days, the nitty gritty details will be there. Just know, that diligence and hard work pays off and although Sparky will be doing the great room floor in little bitty sections for some time to come, it's gonna look really really nice when she's all done. And hey, with some tunes in the background, it's actually kind of a no brain drain kind of activity, right up Sparky's alley. Sparky's strengths do not lie in using her intellectual, analytical, reasoning line of thinking skills on a regular basis, so she enjoys chores and activities that don't require a LOT of that type of thinking! 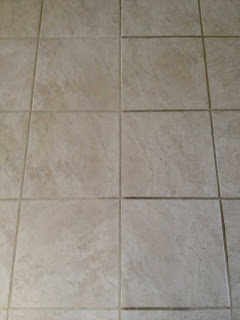 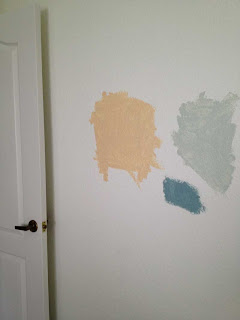 What's cool for indecisive, impulsive, ADD people like Sparky, you can go to Lowe's and they will mix a little jar of paint for you to take home and try on your wall to see how you like it. Just three dollars will get you a pint size jar of color to try. Sparky tried three colors, painted swatches and then, picked a 4th color WITHOUT trying it on the wall. Came home, started cutting in the trim and ceiling edge, and--she's not sure she likes it just yet. 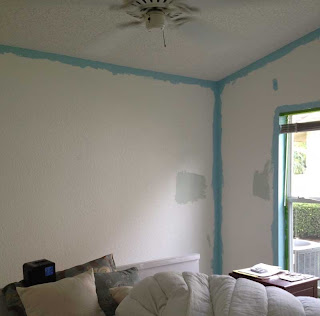 It never ceases to amaze Sparky in the limited time she's been painting, how the color seems to appear totally different in shade and tone once it gets on the wall, and this is a WHITE wall that's getting painted. The shade card in the store looked like a very light, relaxing, pale ocean greenish blue, and on the wall, with bright sunlight streaming in the window, it looks like bright blue sky! Sparky was hoping for something a little more subdued and in a grayer, blue range....Oh, well....Eldy likes it, and maybe it will grow on Sparky once it's dry and a little bit of furniture and photos and accents get in there. (There seems to be a recurring theme here. Sparky THINKS she likes something, then she's not so sure!)

Sparky had a BIG OOPS the second day she was cutting in the walls and edges of everything...went to move the drop cloth, that thin plastic sheeting that sticks to your feet (especially after you get paint on them), and forgot her little paint bucket was sitting on the floor on the sheet. The drop cloth stuck to the Frog tape, Sparky gave it a yank, and the drop cloth pulled away from the wall and the tape, and it was like one of those magician's who yank the table cloth from out under the dishes and the dishes stay--only Sparky's bucket didn't stay...A good portion of paint plopped out onto the carpet right in the corner..."OH, SH**! SUGAR!" And a few more choice words. ( I NEVER hear Sparky swear, except in extreme pain or when she's done something she didn't want to do that has BAD consequences, explains E.)  Like this: 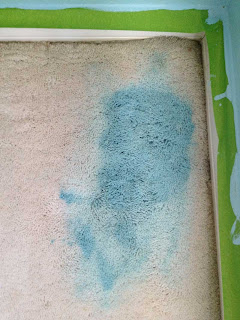 According to Google and YouTube, it shouldn't be any problem getting latex paint out of the carpet with a little effort with soaking up the excess with paper towels, a little dish detergent and warm water. Yeah, right! A roll full of paper towels later, about an hour later, and lots of soaking up paint with color still coming up, it was still bad. Sparky will either cut out the offending section, about a six inch square and glue in an approximate square of approximately the same color of cream carpet, or an eventual nightstand--to be purchased, is going to sit snugly in this corner until we can afford to replace the carpet!

Eldy worked hard today on the irrigation system--little heads aren't spraying right, one has a leak, so he did his research and YouTube videos, talked to his son who is a landscaper part time, and between texting, photos, his son and YouTube, he figured out how to repair it. Why does Eldo have a soup can in one hand and a trowel in the other?

Because he needed something to tamp down the dirt after repairing the sprinkler head, so Sparky suggested a soup can! We don't have ANY garden tools except the trowel at the moment, because our lawn gets serviced by a lawn care guy, and we didn't keep any garden implements when we sold our houses and hit the road. So, we're missing a few things when doing a little yard work of our own. We'll continue to improvise unless we absolutely have to go buy something! We'd go ask the neighbors, but they are snowbirds and nobody's home till the fall. At least, that's the way it appears, or everybody is holed up inside avoiding the heat and humidity.

We've been having a lot of these kind of conversations lately....

"Honey, do we have a garden trowel?"
"Yeah, but I think it's in the storage shed." (Two exits down from Bradenton)

Time to take a break after all this hard work, so off to Main Street Trattoria in Lakewood Ranch for some GREAT pizza, caprese salad, and some cheesy garlic bread....After Sparky's major paint spill, it was a great way to end our day and to soothe Sparky's paint snafu. Nothing soothes better than CARBS and FAT! Gotta keep that energy going for these household projects, dontcha know! (And it made Sparky feel better, says Eldo. Gotta keep that little woman happy, it's a full time job!)  :-) 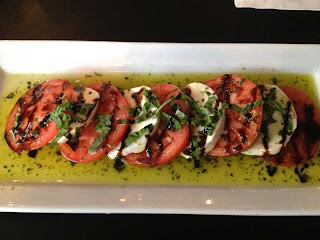 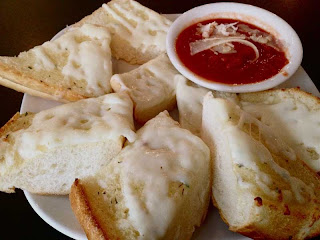