Especially when you haven't done it in 30+ years!  We're not counting the "man cave", the den, as that was a first time trial that needed a lot of fixin'. Time to paint the kitchen nook area...After paying someone to do the great room which had 17 foot ceilings and architectural ledges, we figured, aw, heck, we can certainly do this small kitchen nook space even if there is a popcorn ceiling! Sparky had a lot of trouble when she painted the walls in the den with the popcorn ceiling, but this time, she discovered that if you get a ladder tall enough and you get close enough to the ceiling, you can carefully, oh, so carefully cut in the edge of the ceiling.....And there aren't any high flat ledges way up in the kitchen nook, so this painting job was a little easier. 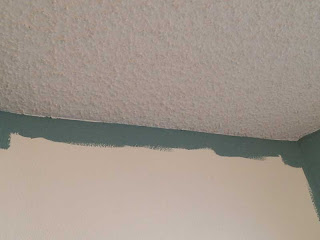 Sparky spent a LONG time carefully taping everything, the windows, the baseboard, the door frames. After the last attempt at do-it-yourself painting the den, and having the paint leak through the blue painter's tape, this time Sparky tried Frog Tape. A little pricier, but this tape is supposed to have better adhesive and paint blocking qualities. 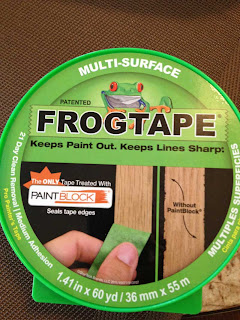 About two hours later, after doing just about all the cutting in work and trim, she had neck problems, back problems and her feet hurt from standing on the ladder for so long...W-A-A-A-A-N-H!  "ELDY, I'M QUITTING FOR TODAY!" 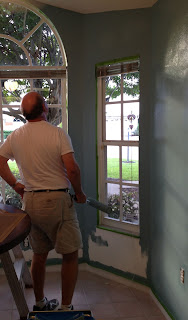 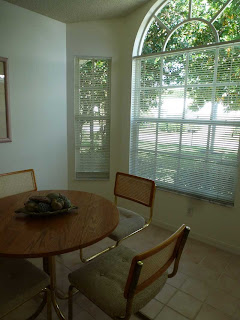 And the after, with the rusty kitchenette set replaced and the walls painted a sea ocean greenish blue. It's not really this dark a color, it's just clouding up outside...It's a much prettier lighter shade in the teal/ocean blue family and in bright daylight, it looks lighter. 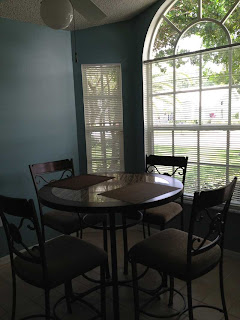 And it looks pretty darn good! And the Frog Tape did the job! No leaks! (Sounds like a diaper commercial). Sparky is ready to paint something else! Hm-m-m-mmmm...Maybe the guest bathroom, but that's got really old wallpaper to come off....But hey, Sparky is up for the challenge! 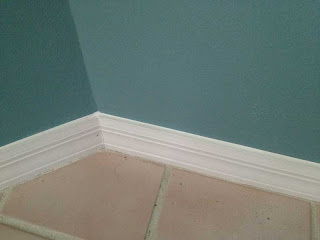 We'll see what she tackles next.....Eldo still has more sprinkler heads to fix and a light kit to install in the guest bedroom....And a new hall light to replace the rusty old one....and.....(The honey do list is getting longer by the minute! worries E.) But we have all the time in the world to do it since we're retired...Sparky just wants to get ready in case any company comes! Bye for now......
Posted by Jeannie and Eldy at 11:50 PM