The Fair is FREE! Let's Go!

The Elkhart County Fair is the second largest county fair in the country. It's HUGE!   On Sunday, it's FREE! FREE parking, FREE admission. Everybody and their brother decides to go on the free day, so you better get there EARLY!  We were going to meet up with Eldy's son, Brian, wife Lori, and their kids--Cate and Trevor at the fairgrounds. The lines of cars snaking down the county roads leading to the fair were long and crawling slowly.

We were both coming from different directions, and when we saw the THOUSANDS of cars being parked in the fields, we thought, gee, we'll never find these guys unless we text our exact location and then MAYBE, we'll find each other. So, we parked our car and hopped on the trolley..and who should we see, but Brian, Lori, Cate and Trevor on the trolley! What luck! 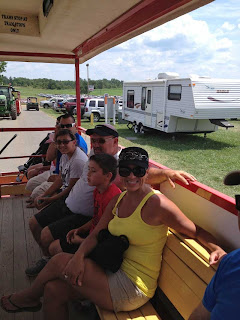 Off we went to see and do what the kids wanted to do...First, the chicken barn...The kids have some chickens of their own, and are hoping for some eggs soon, so they are interested in all things chicken. Now Sparky knows NOTHING about chickens, roosters, guineas or anything chicken, but we saw some COOL chickens/roosters/guineas, etc. 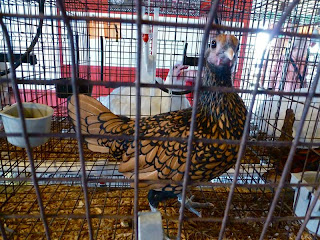 How about this one? He (?) was beautiful! 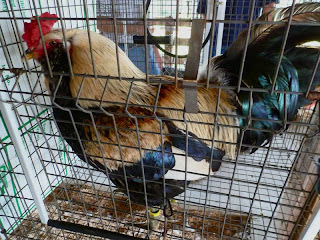 Sparky likes roosters now, for some reason, as a home decor thing...(Luckily, she hasn't started collecting all things rooster, says E.) And how about this cool white turkey? 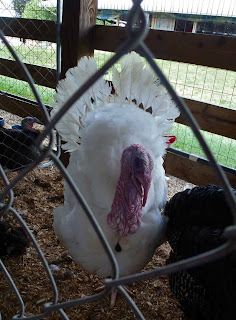 Sparky is REALLY interested in Nelson's Golden Glow chicken,  which is a fund raiser chicken operation which has sold all over Michiana for YEARS, but she got that later.....

Fairs are cool...cool animals....This Percheron (?) or Clydesdale REALLY enjoyed getting hosed down from his handler. It was HOT at the fair today. 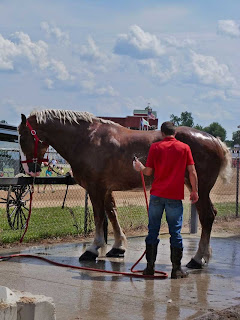 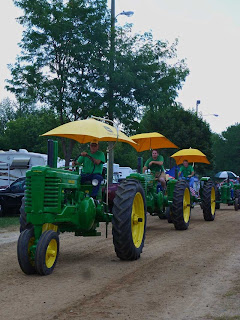 Cool rides....Cate and Trevor picked this ride on your stomach flying ride. 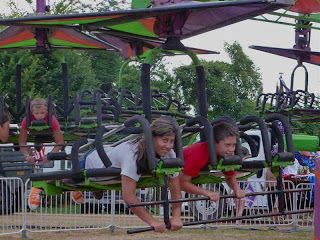 This ride looked fun, but Sparky doesn't do amusement park rides...maybe a water ride but that would be it. So she just watched everybody else scream and look like they were scared to death...Well, some, anyway.... 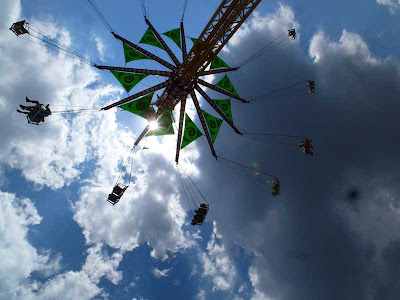 The grandkids had a ball.....They are up there somewhere on the ride! 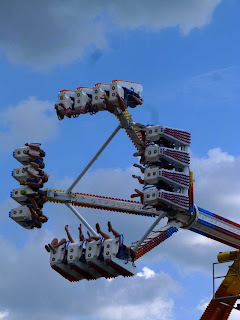 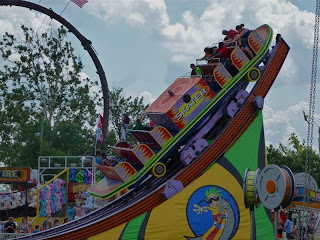 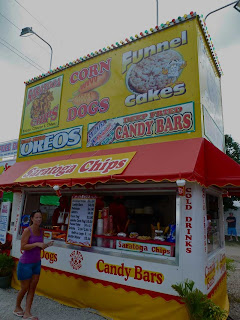 Sparky was a good girl, she had one corn dog and a small piece of Nelson's chicken....Trevor was contemplating something, we're not sure. Maybe what to eat next? Maybe spaghetti ice cream? Frozen strands of frozen yogurt with strawberry sauce and grated white chocolate to resemble spaghetti, parmesan cheese and tomato sauce. No? How about jalapeño corn dogs or Fruity Pebbles corn dogs? Right here at the Elkhart County Fair.... 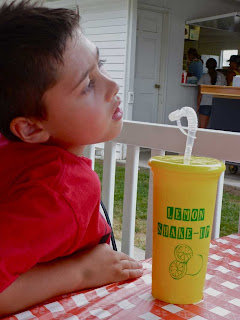 AHA! He's got it! He wants some more lemon shake up! Whew! Glad he didn't decide on that other stuff! 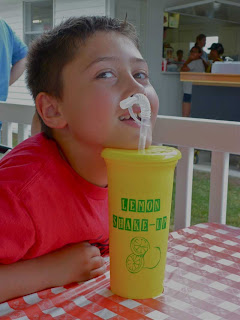 And the fair isn't complete without a great band. In this case, the Goshen High School Marching Band. They sounded great! 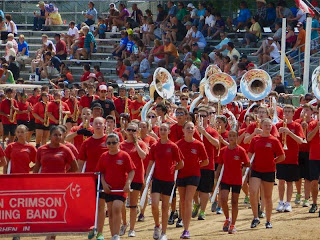 It was a lot of fun watching the grandkids have fun today on the rides...Love the fair and the foods...There is so much more to be seen, but we didn't have the energy to check out all the 4H exhibits indoors and many more buildings and animal exhibits as it was quite warm outside.

Always great to see family and see our grandkids having fun....We'll see you later!
Posted by Jeannie and Eldy at 11:39 PM