Company's HERE! It's Theresa and Chuck, Eldy's sister and brother-in-law. We're really glad to see them! They arrived at 10:00 this morning, and were rarin' to go and do something. They said they want to hike and bike, bike and hike. All in one day? Well, maybe not, let's do a hike today and see how it goes. Let's get going!

So we did! There was just one small, slight problem..Theresa had bad knees and she freely admitted that they would probably bother her, but she REALLY wanted to see some sights. She brought plenty of pain medicine, she said. She was prepared! So we started out easy...a short Beech Mountain hike of about .7 of a mile, but a quick ascent and then a more gentle loop back down.  Piece of cake! 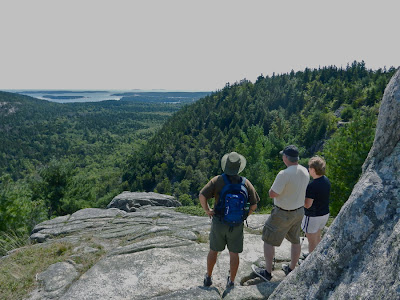 We are ready for more, they said. OK...We'll do the Beech Mountain hike to the fire tower...That's got some AWESOME scenery! What we DIDN'T remember, is that the Beech Mountain hike to the fire tower is a STRENUOUS hike. We thought one of our hiking books said it was a "moderate" hike. What we did remember is, last time we did this, (Sparky and Eldo), we went the wrong way on the hike out of the parking lot and ended up doing an almost three mile hike up to the fire tower and back. This time should be easier if we went the correct way and the total distance would be about 1.8 miles, both hikes put together. That sounds pretty good, everybody agreed..Let's do it! Eldy asked, Sis, are you ok to do this? Yep! So off we went up the side of Beech Mountain., 839 feet high and a popular hike, judging by the number of people we met going up and down today. We made sure to take plenty of rest breaks. 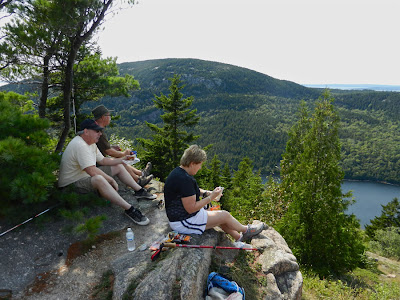 Theresa and Chuck were awed by the scenery. Sparky and Theresa stopped often to take photos and catch our breaths. Sparky's knees were still worn out from that overly long bike ride the other day, so her knees were in empathy with Theresa's. We stopped for a picnic lunch about 3/4 up the trail. Wow!

We get to the fire tower, and normally, it's closed most of the summer. Today, we got lucky and it was open another two levels. Only six people at a time can be on the tower. Up we went to admire the view. Sparky was a little nervous about rusty girders, skinny railings and swaying movement in the tower, so she got a fast photo and headed down.
There were two volunteers from Friends of Acadia giving a short talk about "Leave No Trace" at the base of the tower. We appreciated their efforts in trying to educate the public. Leave the cairns (the stone trail markers with indicator stones) alone, don't build new ones, stay on the path, pay attention to trail restoration area efforts by not walking on the roped off areas, don't walk off the trail and around obstacles making your own new path and things like that. They had interesting photos of all the crazy stone works people build in Acadia trying to be "cool" and "artistic." It was kind of sad, in a way, that people try to change God's environment  to suit themselves instead of appreciating it the way it is, and leaving it untouched as much as possible for future generations.

Some guy had his dachshund running around behind him on the trail, no leash. That caught their attention right away and they called him on it. He made a feeble excuse that he had the leash with his trail partner. Sparky said, "I'll bet that's one tired pooch at the end of the day!" And the dog's owner said, "Aw, heck, he can run this trail twice and not be tired." Too bad he's not following the "Leave No Trace" principles. I'm sure he lets his dog run wherever he wants to, trampling the vegetation and pooping and peeing wherever he wants. Gr-r-r-r.....(That's Sparky, not the dog, clarifies Eldo.)

Back down we came, it was extremely rugged and rocky--rough finding places to place your feet, and it was necessary to take large steps down onto very rocky terrain. It was tough! Even with hiking sticks! After we got back, it was time for R & R...a little wine, a little beer and a LOT of ice!
Hope those little pills work for Theresa 'cuz she wants to bike the carriage roads tomorrow! Sparky says, we will NOT being doing the Giant Slide Loop (where she lost her keys).....We'll see what the "kids" are up for...(They are both in their fifties...YOUNGSTERS!) We finished up the day with a dinner at Seafood Ketch, a great little restaurant down at Bass Harbor with the best homemade bowl bread and clam chowdah!  See you tomorrow!
Posted by Jeannie and Eldy at 11:36 PM