The 2012 American Folk Festival in Bangor

How about a FREE festival in Bangor for something to do today, Eldo? He said, "Let's go!" So we did. Festivals are always great fun. Great for people watching....Sparky almost labeled this post "Doggy  Style" because of this photo below...But that would have opened up a can of worms AND a BUNCH of spam, so she didn't. But it sure would have shot the pageview numbers up, ya think? This little chihuahua was wearing STAR sunglasses, and I guess he rides with his owner on the bike as in bicycle, everywhere the guy goes. The lady was asking the rider if the dog ever falls off, and he says something about the dog is attached to a harness on his chest. M-m-m-m, ok.....on to the festival.... 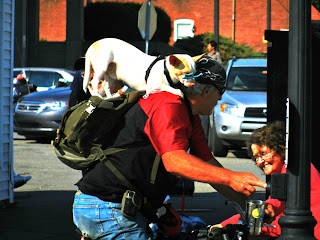 This little guy was really watching the Lakota hoop dancer very carefully. He then turned around and gave me a big smile when he saw my camera. Would have been a nice shot, but we were more interested in the music, he and I. Kindred spirits..... 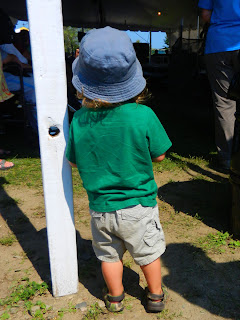 Festivals are great for foodies like Sparky. Lots of ethnic foods, wraps, tacos, Greek food, and "bad" food like homemade potato chips. Just for the record, Sparky and Eldo didn't have any....And a festival is great for entertainment. This festival had four stages, one was HUGE--the railroad stage.... 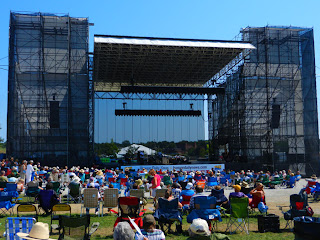 One of the performers was a steel guitar player by the name of Aubrey Ghent. He was terrific! 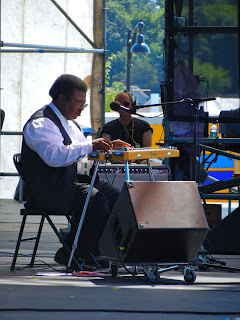 What was really cool, was an American sign language interpreter was there on stage with him. She was bogeying to the music while signing. Sign language is such a beautiful language, and she was so expressive while  doing it. Some people might feel that that takes away from the focus on the performer, but it was so well done, Sparky didn't feel that way at all. What a wonderful service to provide to the festival goers! 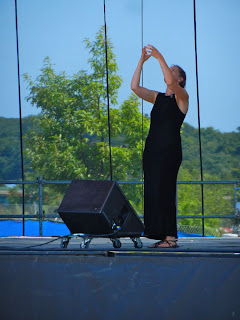 The festival was packed with entertainment from all over the world from Friday thru Sunday of this past weekend. In case there were lots of groups you wanted to see, and you didn't want to miss one playing at the same time as another, there were multiple performances from them. Everything from  steel guitar, blues, doo wop,  Irish dance, western swing, bluegrass, and a "cajun style Hank Williams" a.k.a. D.L. Menard and Friends... 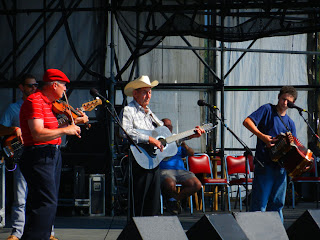 to a Ghanian Dance group--the Akwaaba Ensemble.....they had wonderful energy, put out really good vibes, and obviously enjoyed playing their music, dancing and drumming for the crowd....Sparky just loves African music and the drums! 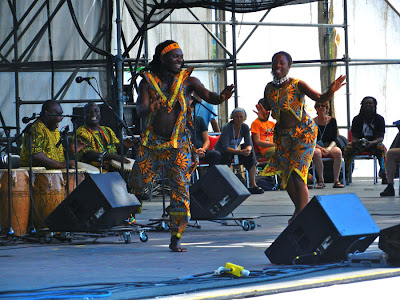 to a high energy, top notch Columbian group called Grupo Rebolo, who had a standout trumpet player really kicking up the energy along with a great lead singer....

to some highly skilled fiddlin' and old time buck dancing...a dance that looked like a cross between clogging and tap dancing performed by a six time national champion buck dancer. Boy, did his feet and legs move in all kinds of motion! Buck dancing is also known as flat footin' dancing and is a traditional Appalachian style of solo dancing in a very small area. A dancer adds extra stomps, kicks and taps to the beat of the music in a very individual style. 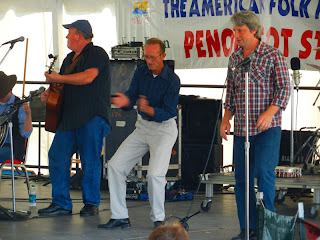 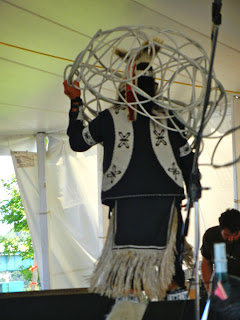 And then there was a Lakota Indian, Dallas Chief Eagle, from South Dakota (our now home town) who did the Lakota Hoop Dance. A young woman, who just graduated from high school, was a national champion hoop dancer and she performed the Hoop Dance as well. He gave a wonderful speech beforehand about going to the "inner world" instead of the "outer world" to find harmony and peace within oneself and with others. He talked about how technology (the outer world) causing more harm than good in many ways as far as humans losing touch with nature and themselves. He relayed some sad stories about personal loss related to that. It was a beautiful dance and fascinating to watch.

Along with all the international entertainment provided all weekend long at four different stages, there was a marketplace for all kinds of cool stuff being sold, and a narrative stage where Maine guides were giving talks about all kinds of things related to sports and recreation in Maine. Sparky visited a tent where a woman of world renown was demonstrating the art of tying fishing flies. She wanted to find the guides giving talks about fishing and sportsman camps to ask, HEY, WHERE ARE THE MOOSE YOU GUYS KEEP TALKING ABOUT? but she didn't. They were busy giving talks on hand crafted baskets, creels, and decoys.

The admission to this festival was free, but the promoters were hoping for help in keeping the festival going. The cost to put on this size festival with all the international entertainment runs in the hundreds of thousands of dollars, so the "bucket brigade" was out and about suggesting a minimal donation of ten dollars a person to keep the festival coming back year after year.

We had a GREAT time at the festival today, and hope people will go check it out next year, when it comes around again. Fabulous entertainment, food, and lots of people = lots of fun.....