Finishing Up in PA

We finished up our stay in Pennsylvania with some fun things. We loved our stay here. Lebanon, (where the RV park is located) is a nearby town to Hershey and the surrounding farming area is truly beautiful. There are so many big, beautiful farms and rolling hills. It appears to be a very prosperous area. 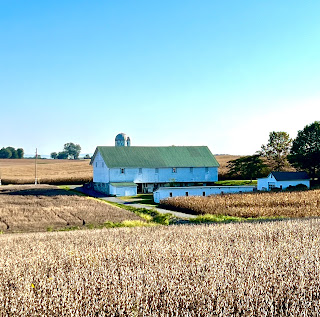 We went to the Hershey RV show just for fun, and saw some fabulous floor plans for fifth wheels and motorhomes. Sparky's favorite was the New Horizons fifth wheel floor plan, light and airy. It's a very expensive fifth wheel RV. If you just happen to have $109,000.00 for the sale price, it could have been yours at the show! 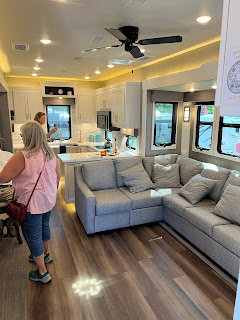 Since a new fifth wheel is not in the cards, Sparky really wants to try to lighten up our interior somehow. It's so dark! It would be a major undertaking to paint the cabinets, and we think it wouldn't turn out nicely, so Sparky will try to lighten up the valences and we eventually plan to get rid of the black queen sofa bed and put in two light colored rockers and a little table instead. It's interesting how RV designers have trends just like the housing market. Everything was dark wood for awhile, and now it's farmhouse white and light. This is our current living area. 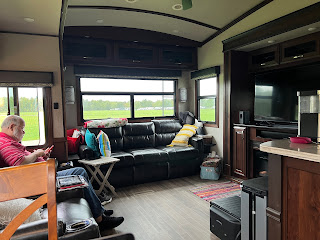 For one improvement, since we couldn't swap out our fifth wheel for another one, we decided to replace the mattress that came with our used rig for a different one. It was a king, very thin, poorly supported 6" thick Beautyrest. Both of us had been having a lot of back issues and sciatic problems, so we thought maybe if we got a new mattress, that would help! Now the problem is, you can't get a traditional mattress thru the narrow front door of the RV without bending the heck out of it, especially if you need a KING. So what are our options if Sparky wouldn't go any smaller? A mattress in a box! It's the latest "thing" in mattresses....saves lugging the big thing home in a truck, or having to have it delivered if you don't have a truck, and for RVers, a piece of cake to get it inside and set it up. We went from an RV king mattress which is 72" X 80" to a regular king mattress which is 76" X 80". As soon as we started to take off the outer layer of plastic, the mattress started to make noise....."PSHSHSHSHSHSHHHHHH...." We thought it might explode right out of the bag, haha, but it didn't. Once all the plastic is off, you can see it expanding slowly in front of your eyes. You wait about 24-48 hours for the internal coils and foam to fully expand before sleeping on it. It has really made a difference in the amount of support and we are both sleeping much better with the new mattress! 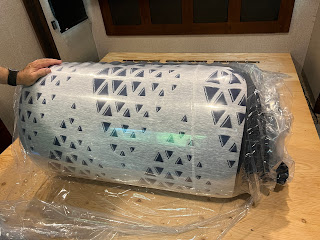 Sparky went riding back out on the Lebanon Valley Trail a few more times. The trail is being majorly resurfaced in the worst areas with a crushed cinder/sand combination plus asphalt paving in some sections--woo hoo! Wonder what the story is behind this umbrella? Did the wind catch it and toss it to the trees? Did someone purposely throw it up there? 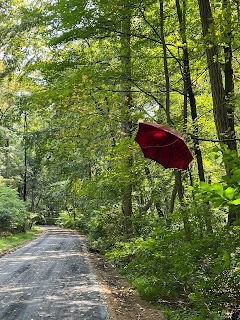 You never know what you might see on a trail! Sparky thinks "deer" but sometimes it's something else. Yep--several chickens and roosters! 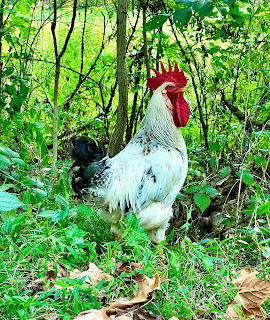 Or a rat snake....This one seemed like a big one! 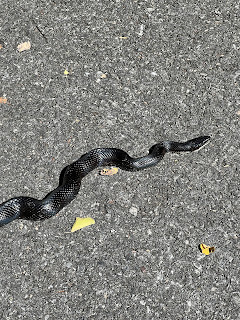 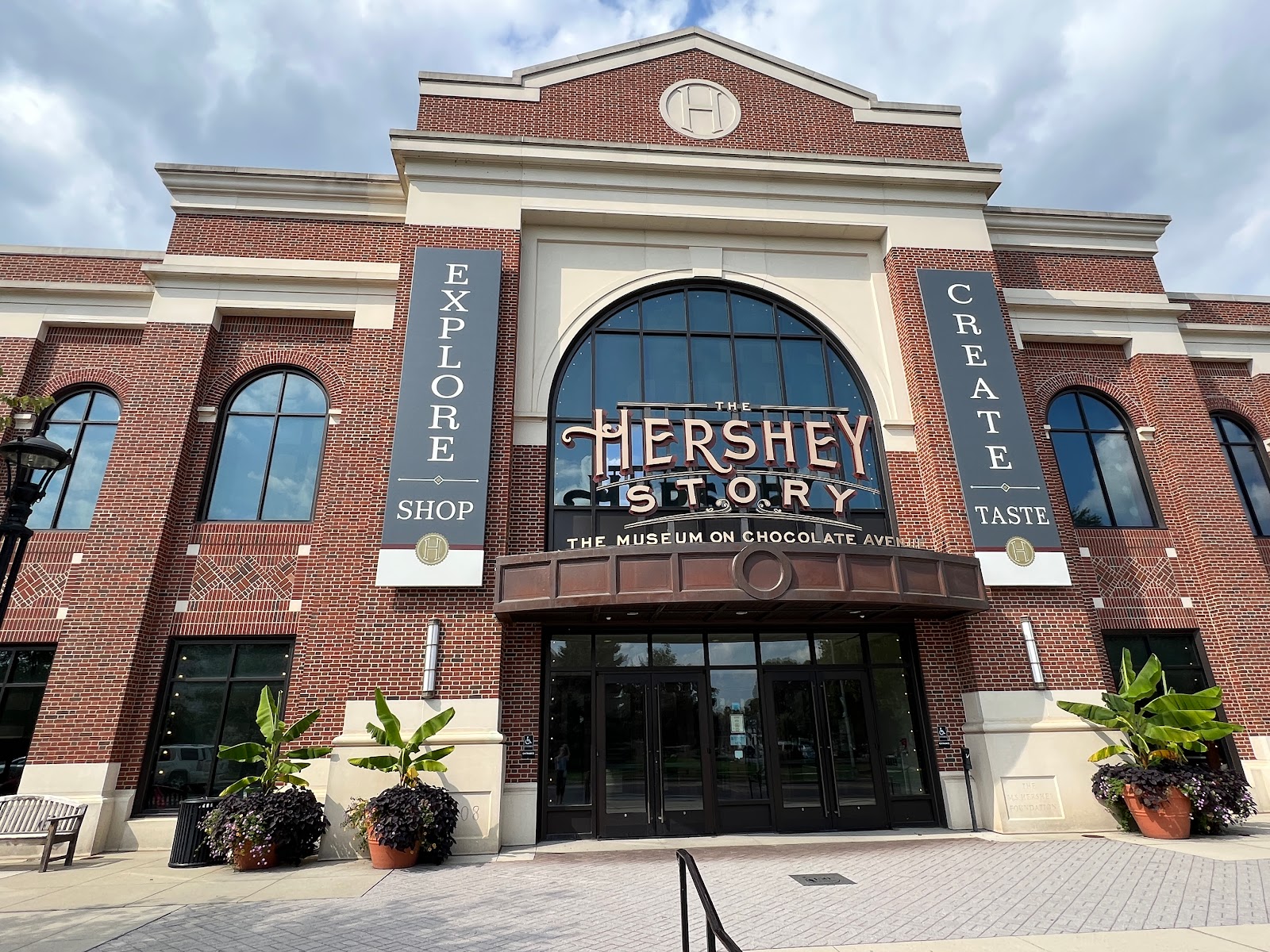 We checked out the Hershey Museum, about all things chocolate and Milton Hershey, an amazing businessman for his time. Did we mention that many of the streets in downtown Hershey have names like Chocolate and Cocoa Avenues? And that 55 of their street lamps are shaped like wrapped Hershey kisses and 52 are shaped like unwrapped ones? Hershey's kisses used to be individually wrapped of course, from 1907 to 1921 until someone invented a machine to wrap them. From 1942 to 1949, the production of Hershey's kisses totally stopped because there was no aluminum foil available due to the war effort. 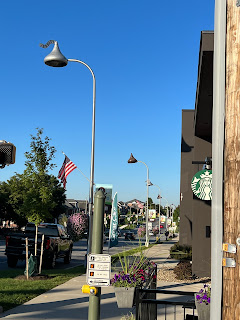 The museum was really great. Milton Hershey was a businessman ahead of his time. Armed with only a fourth grade education, at the age of 18, he began his own business of making caramels, then switched to chocolate, because chocolate was a burgeoning, booming market back in the early 1920's. Hershey was a visionary, he believed that happy workers were productive workers and he designed the town around his factory to be a place where people could own their own homes at affordable prices, enjoy their time away from work through recreational activities, and that they should have a say in how the company was run. If he took care of workers' needs, they would be happy to work for his company and they were. Hershey's company workers came up with many productive and innovative ideas that made Hershey chocolate company world famous. He felt education was so important that he donated all of his entire fortune three years after his wife died, to found the Milton Hershey Industrial School for orphaned boys in 1909. The school has become well known now for its providing an enriched environment for children who come from struggling families. 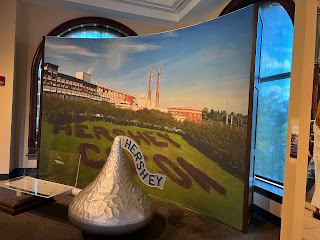 And last but not least, we found an excellent Mexican restaurant in the nearby town of Palmyra, called Rey Azteca. We highly recommend it if you are in the area. A big menu to choose from, really good street tacos (Sparky's favorite) and a ton of choices of burritos. 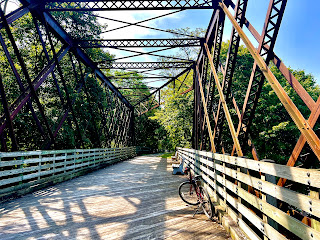 And with that, we say goodbye to a fabulous stay in Pennsylvania. Sparky will miss that beautiful Lebanon Valley Trail, but there are more trails to come. If you stay at the Thousand Trails Hershey Park in Lebanon, PA, the trailhead closest to the park is called the Colebrook Trailhead.

It's on to Ohio, to Kenisee Lake Thousand Trails park for four days. We are going to an apple orchard, going to see a few covered bridges, and attend a grape/wine festival. There are over 30 wineries in the Lake Erie area where we will be staying!

Posted by Jeannie and Eldy at 8:08 PM