A Bit of Time in Pennsylania

If you are an RVer, starting to make your way from the northern states where you have spent your summer to the southern states for a warmer winter climate, you have two main choices that many take. One, you start heading south towards Florida or the states along the Gulf coast, or two, you head towards the southwest or California. Florida is so popular for winter RVers and snowbirds, that it is extremely difficult to reserve campground spaces for the winter, and you have to start MONTHS in advance, trying to reserve a spot.

Having lived in Florida for seven years, hating the heat and humidity and the traffic congestion, we prefer Texas and Arizona. So, after a lovely summer in Maine, we are heading towards the midwest first, to Indiana where Eldy's family is, then to Texas and Arizona. First stop after leaving Maine, is usually somewhere in Pennsylvania. Our destination was the eastern corner of PA, where we have a Thousand Trails membership park called Timothy Lake South. It was a driving distance of about 345 miles, a long driving day for Eldy. We usually try for an average of 300 miles per day or less. We usually try to get in a park on a Tuesday or a Wednesday for the best choice of sites. The weekenders usually leave by Sunday or Monday so the full timers are waiting to come in mid week to be able to choose a decent site. There are several Thousand Trails parks in PA. We like staying at Timothy Lakes South, in Bushkill, PA. This is the park that the deer wander through early morning and late afternoon and the park is near a private nature park called Bushkills Falls, which has seven waterfalls and great hiking trails. We scored a really nice shady back in site. NOTE: This campground has very HIGH water pressure, like 80-100 psi at the spigot. If you have an older rig, you could blow out your pipe fittings or do even more damage if you don't have some kind of water regulator at the spigot. The campground even sells cheap water regulators at the camp store just in case. The office told Sparky someone blew out their kitchen sink fittings because of the high pressure. We think the high pressure is from upgrades in the park to old water spigots at the sites. It never used to be that high on previous visits, but that is just a guess. High pressure is a welcome change from such low pressure at many campgrounds that you can barely flush your toilets sometimes or have a decent shower without feeling like it's a "dribble" shower. When we first turned it on, it blasted the water out of the toilet bowl, haha, as we cleared the lines of air when we first hooked up. Newer rigs can supposedly handle pressure up to 100 psi's easily, but check your owner's manual to be sure. 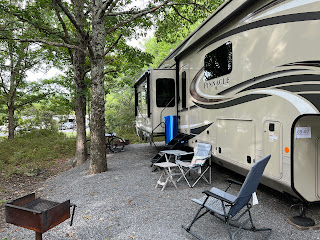 Unfortunately, cell service in the middle of the Pocono Mountains is TERRIBLE. It doesn't matter whether you have Verizon, T-Mobile, or AT&T. We have tried our AT&T hotspots, and our T-Mobile mifi, and nothing is working very well. People complain all over the place about how bad the internet is here. Isn't it something how much we depend on that these days for entertainment? No streaming here, and tons of buffering. Might as well read a book or two instead. You can sign up for something called FastWave at the campground, but it's not fast, and the "wave" is a little puny rolling one, haha. We are lucky if we can even send texts or make calls that don't drop. If you drive out of the campground and into the next town, you can get a better signal, but that's not very practical if you want to watch a football game on the weekend! So Eldo has to suck it up and just do without. And trooper that he is, he is ok with that for one week, but no more than that, haha.

That's what we don't like about this campground. Here's what we do like...Shady sites that are not hard to get into, a choice of being out in the open or back in the woods, a nice pool, a nice playground for the kids, and very nice staff. The pool closes Labor Day weekend and that's it! No matter how hot it still may get, the pools in this part of PA close Labor Day. 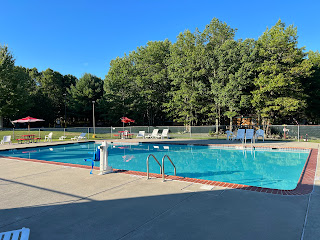 Sparky has actually swum in the pool several times late in the day. Because it's unheated, it's not frequented by any but the very hardy. Temps at night have been in the low fifties so that is keeping the pool nice and chilly!

Sparky rode the McDade Trail, a "recreational" bike/hike trail that is very nearby and goes for quite a few miles. There are several trailheads along route 209, Sparky gets on the one that is closest to the campground, right by Marluca's Italian restaurant and deli and heads out north on the trail, which runs parallel to 209. They've recently paved the road to the trailhead and made the bridge road wider so bikes can safely ride at the side of the road to get to the trail entrance. A lot of the trail is shaded, which is great! And you do pass through some beautiful sections of forest as you ride. Kinda makes up for the bad rocky gravel parts. 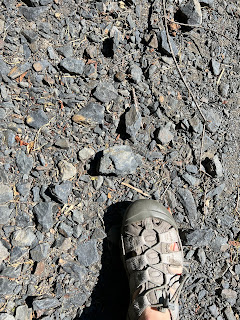 The trail itself is not very good. It's very large rock gravel which makes for a bone jarring ride, even on a Trek comfort bike. It's very uneven and hilly, with steep quick inclines and descents and hasn't been leveled in some time. Sections of the trail along farmland were severely domed from run off rains. Sparky did a total of sixteen miles out and back, which was enough for a bad trail, and was disappointed to see that it had deteriorated from the last time she rode it. There are also overhead branches that will smack you in the face if you don't watch out. 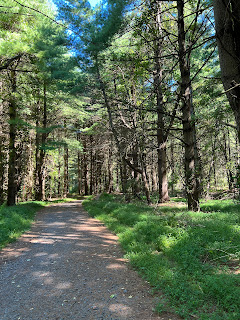 You ride along farmlands on one side, and the Delaware River on the other. You can see the river through the trees occasionally. There are some beautiful sections through forest and the trail is probably 75% shaded in the portion that she did ride. There were few riders on the trail the day Sparky went, but she almost got run off the trail on a very narrow single tracked corner turn, when an avid cycler came careening around the corner, never announcing himself. Scared the bejeezus out of her!Labor Day was a very busy weekend at the campground. The campground had almost completely filled up by Friday. Lots and lots of families with kids. They are having a ball!  So we took it easy! Sparky crafted, making another Scrooge and Eldo enjoyed the breeze outside the rig. Very few bugs, we are surprised we aren't getting attacked in the woodsy part! 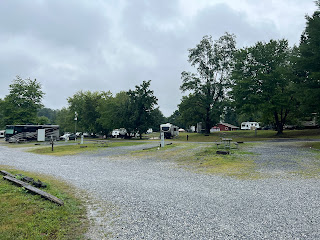 In a Thousand Trails park, you almost always drive around to choose a site that has been generally assigned to you based on your size when you made your reservation. It's a site reserved generally and not specifically as far as where it's going to be in the park, if that makes any sense. So we came in around 12:30 AFTER check in time which is 12 noon. Don't show up a minute sooner or they will make you turn around and go back out of the park till it's noon or later. We drove in and around in our big rig and found a great spot! (B-2) It's a corner lot with lots of room on all sides of us. We love it! Nice big shade tree at the side and plenty of room for the truck. We will be here for two weeks. we hope to do the Hershey plant tour along with the Hershey RV show. Should be a fun week! 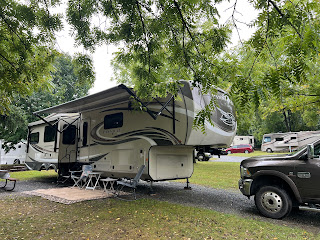 We are happy to be here, it's such a nice park...they have a fair amount of activities for families, too, and some live entertainment on the weekends. Also, every Saturday night, they have the "Hershey Howl". go outside at 8:45 PM and let your inner wolf out with a big howl! Just one will do, haha. We are getting closer to family, too...Sparky is happy because there is a rails-to-trails just a few miles from the park. It's called the Lebanon Valley Rails to Trails and is about 18 miles long.
Next week we will take in the BIG Hershey RV show--The show covers 33 football fields (!) for the size of its presentation of anything and everything RV related--the 2023 models, things you can buy for your RV, and hopefully, some seminars to learn some new things. Looking forward to sharing the latest and greatest RVs with you! It's fun to look and see what the manufacturers think people will like and want to buy.
Like us...We never thought we would end up with a towable fifth wheel, but here we are. We were hoping to find a class A motorhome (the big rectangular box style RV with fancy painted sides that tows a car behind it) back in 2018, but during Covid, those types of RVs were rare and flying out the door faster than we could make an offer. After looking long and hard, and not being able to find a class A motorhome, we got a great deal by looking at a package deal--a used 2018 Dodge truck and 2019 Jayco Pinnacle fifth wheel, (when you have a fifth wheel, the truck tows the RV) and we are very happy with it! (Except Sparky doesn't like trying to park the big dually, explains E.) Bigger is not always better, especially when trying to get into state parks and national park campgrounds. There are size restrictions with those types of places--many say 38 ft. or smaller. Initially, we were hoping to find something shorter but it just wasn't available at that time. So when you do have a rig over 40 feet, you need to have a BIG powerful truck to tow it, so that's what we have. And when you are living in an RV full time, most people really want and need more space. (So Sparky has more room for her craft stash, laughs Eldo). Ummm, yeah, well...that, too.
More about the Hershey show next week...See you down the road!

Posted by Jeannie and Eldy at 7:18 PM